Almost exactly 10 months ago, the Chicago Cubs promoted Jorge Soler to the major leagues. I wrote the following:

We’ve been spoiled as of late, with guys like Mike Trout, Yasiel Puig, and Bryce Harper coming in and finding legitimate success immediately. Thus, many fantasy owners are sitting on these young players and expecting near-peak performance as soon as they don a big-league uniform. Unfortunately, the chances of that happening with any prospect, including Jorge Soler, are exceedingly small—especially when considering that the biggest concern remains his hit tool.

My cautious approach to Soler quickly rang hollow, as he exploded onto the scene. He hit .292/.330/.573 with five homers (.281 ISO) in just 24 games. He hit for average and power, while driving in a plethora of runs. The major leagues proved to be an extension of his dominance in Triple-A, rather than the standard roadblock that it represents for standard young players.

Or, at least, that’s how the narrative read over the winter.

Fast forward to the 2015 season, and my words of caution suddenly have a tinge of truth. Soler struck out in 32.2 percent of his plate appearances prior to landing on the disabled list, with a mammoth 15.1 percent swinging-strike rate. His overall offensive performance hasn’t been dreadful — after all, his slash line is .265/.322/.402 in 208 PA — but the hit tool has held him back from being the offensive juggernaut that he was a year ago.

This isn’t to suggest that Soler has been or will be a bust this season. Instead, this story is the one we expected to be told much earlier. Fantasy owners should have expected a rocky developmental journey from Soler—because he’s a young player trying to transition to the big leagues, not because he’s fatally flawed. Something similar could be said about Rougned Odor, Dalton Pompey, Rusney Castillo, Xander Bogaerts, Gregory Polanco, etc. It’s the nature of being a young baseball player competing against the best in the world.

In the end, I’m not writing this because I wish to reclaim some of my dignity after being criticized for my cautious approach to Jorge Soler—though I’m not immune to such narcissistic motivations—but rather to stop the pendulum from swinging too far in the other direction. Just as fantasy owners shouldn’t have expected a big-league introduction without developmental pains, fantasy owners shouldn’t overreact to those stretches of underproduction.

That’s what this article is about.

Prior to the 2014 season, Jason Parks warned that Soler would likely struggle against high-level arms because he lacked the ability to make in-at-bat adjustments and his hit tool remained questionable. Soler had also shown a propensity for being exploited by quality breaking stuff—or pitchers who could avoid the fastball. In other words, “[P]itchers with a good plan of attack can eat his lunch.”

Again, a .259 TAv from a player in his first full-season at the major-league level is hardly something about which to sweat; however, it becomes clear that Parks’s scouting report two years ago was rather prophetic.

The 2015 numbers for Soler serve as evidence for Parks’s statement. The 23-year-old slugger has plus power, but has limitations in his pitch recognition and plate discipline to consistently access that power. He feasts on fastballs and significantly struggles against secondary offerings. As major-league clubs write the proverbial book on Soler, he’ll continuously see a higher frequency of non-fastballs at the plate.

That’s even proven true this year: 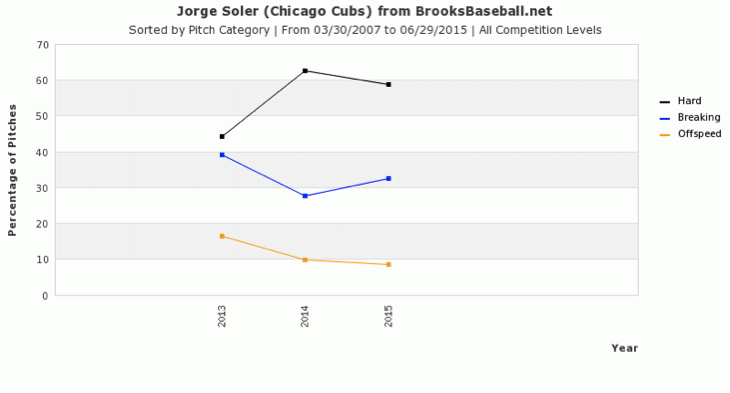 While a near-five-percentage-point drop in fastball percentage isn’t overly dramatic, the trend mirrors what one would expect to continue for the remainder of the year. Until Soler can show improvement against non-fastballs, he’ll continue to see more of them. It’s a game of adjustments. The league has begun to adjust to Soler—his performance has thus suffered—and it’s up to him to adjust back. Step one will likely be to stop swinging at 34 percent of pitches outside the strike zone.

However, positive signs lurk beneath the surface that should give fantasy owners confidence in his underlying skill set. First of all, when he does make contact with the ball, he hits it hard. His average batted-ball distance is 93.48 mph, which ranks sixth in all of baseball among hitters with at least 70 at-bats. Furthermore, he has only hit 12.1 of balls “softly” this year, which would rank 18th in baseball. It ties him with Nolan Arenado and puts him a slot ahead of Mike Trout. When Soler does put the ball into play, he’s going to hit for a high BABIP and for good power, just due to the fact that he rarely makes weak contact.

Soler also shows indications of a quality hitting approach—not necessarily in relation to his pitch recognition, but his batted-ball distribution. He has power to all fields and avoids being overly pull-centric. Only 36.3 percent of his batted balls have been to the pull side, which is less than the league-average mark.

PECOTA expects Soler to hit .258/.317/.460 with 11 home runs from now until the end of the season. That takes into account his two major skills at this point: hitting for power and striking out. Fantasy owners will continue to benefit from Soler’s hitting in the middle of the Cubs’ batting order. He should slot back into the #5 spot, behind Fowler, Bryant and Rizzo. That should present him with ample RBI opportunities, which only strengthens his fantasy appeal.

Development curves are never uniform, though. Soler could have learned his lesson on the bench over the past month and mash, or he could post a 15 percent swinging-strike rate and his .250 for the next couple years. It’s impossible to predict—especially when he’s not on the field—when the light bulb will flicker on, if ever.

Thus, fantasy owners are best advised to place a rest-of-season value on him for what he is, a middling average with flashes of extreme power, rather than what he could be. But that doesn’t mean fantasy owners shouldn’t remain cognizant of what he could be, which is a top-30 fantasy outfielder. What I am trying to suggest, though, is that fantasy owners who could benefit from the .250-.260 average with 10-15 home runs should target Soler in trade talks. Because if he does develop and adjust, the upside is tremendous, but if he doesn’t and he remains limited, that limited value must remain palatable. If the non-upside version would just sit on the bench in 2015, it’s probably not advisable to trade for Soler for this season.

This is a difficult moment for Soler owners. It’s the moment in which his helium has been deflated and he’s the early-career project that he always should have been viewed as. Owners shouldn’t sell on Soler, as they should ride out the expected developmental speed bumps, but only a limited number of people should be targeting him on the trade market—ones that need back-end OF help in 2015 or ones who have completely punted on the 2015 season, and neither of those types of owners are going to pay much to acquire Soler. Thus, in the end, the majority of fantasy owners should “hold” on Soler, neither buy nor sell. He’s stuck in limbo, and that’s far from the ideal time to invest or divest.

You need to be logged in to comment. Login or Subscribe
Oldwell89
If Parks has him over for Chicken Fried Steak and gets him to buy into 'bath time', Katy Bar The Door! Soler could become uncontainable!
Reply to Oldwell89
BUCCOFAN
I traded for him months ago, before he went down with the injury, its an auction league @ $3 for the next 2 years. I think I did rather well. Pat on the back?
Reply to BUCCOFAN
jfranco77
If you're looking for suggestions on who to do next... how about Marcell Ozuna? 'sup wit that dude?
Reply to jfranco77