When MLB Advanced Media installed its brand-new Statcast tracking system in all 30 stadiums this spring, mainstream baseball fans (and fantasy owners alike) were exposed to a rapidly approaching new era of advanced statistics.

MLB front offices have had access to HITf/x data since 2008, but Statcast's release marked the first time that batted ball data was made available to the public. It's already had a profound impact on how mainstream writers analyze the game, however it's use as an analytical tool hasn't quite carried over into the fantasy baseball universe just yet.

The most significant metric, which promises to impact the way we evaluate hitters (the same way PITCHf/x data did for pitchers in 2007) is Statcast's exit velocity data, which measures the speed at which a baseball travels off a hitters bat. According to Rob Arthur of Five Thirty Eight's research, each additional mile per hour of batted ball velocity equates to an 18-point increase in OPS (on-base plus slugging). The higher the exit velocity, the more likely it is that a batted ball will fall for a hit. 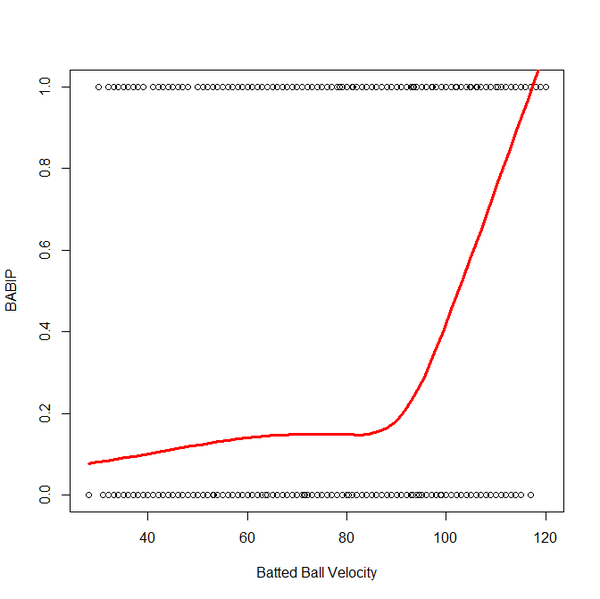 After engaging in a lengthy discussion about batting average on balls in play (BABIP) with Mike Gianella and special guest, Tim Heaney of USA Today Sports, on the latest edition of the Flags Fly Forever podcast, it got me thinking about how fantasy owners can incorporate Statcast's exit velocity data and it's impact on BABIP into their analytical (decision making) process going forward.

Just as with any advanced statistic, exit velocity should never be the singular factor used to draw conclusions about any hitter. It's just one piece to a much larger puzzle, which is limited to an extremely small sample size in the grand scheme of things right now. As Grantland's Ben Lindbergh pointed out earlier this spring, it's hard to look good by luck alone over a two- or three-season span. Over a single season, though (or a fraction of one), it's possible for a player to pass as a better hitter than he is when lucky bounces help his cause.

However, just because the sample is small, doesn't mean that it can't tell us anything. There is a vast ocean of data in regard to exit velocity available on Baseball Savant, which is where the credit for the ensuing data and the accompanying spray charts belongs. What follows are five hitters who possess compelling fantasy-narratives attached to their exit velocity data.

It should come as no surprise that Giancarlo Stanton leads all major-league with an average exit velocity of 97.73 mph. He's registered an exit velocity in excess of 115 mph on 16 batted balls this season. To put it in perspective, only 16 hitters total have even registered an exit velocity greater than 115 mph this year. Carlos Gonzalez, who ranks second on this exclusive leader board, has just three to his credit. If that wasn't apparent already, Stanton is truly in a league of his own. 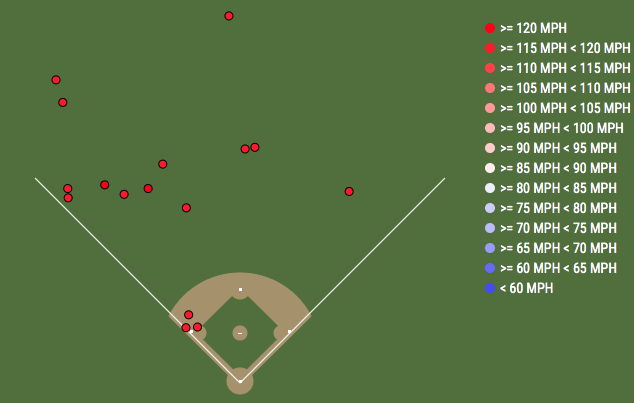 You might be surprised to learn (as I was) that the corner outfielder that ranks second in average exit velocity (out of 295 hitters with at least 50 at-bats with batted ball data) this year is Randal Grichuk. Known primarily as "the guy the Angels selected one pick before Mike Trout" back in 2009, he's made the most of his opportunity to step into the Cardinals lineup since Matt Holliday went down with a quad injury earlier this month.

Since taking over as St. Louis' everyday left fielder on June 10, Grichuk has slashed .343/.351/.829 with four home runs (eight extra-base hits) and a stolen base despite striking out in 35% of his plate appearances during that stretch. He's one of the hottest hitters in the game right now and the Statcast batted ball data supports the conclusion that he isn't just getting "lucky." He's consistently hitting the ball extremely hard and despite his scorching hot stretch, remains widely available in most fantasy leagues.

If he can sustain this elite-level of batted ball velocity for the remainder of the season, the infamous Mike Trout line will become merely a footnote, not the first sentence, when Vin Scully delivers a soliloquy regarding him on Dodger broadcasts.

One of the most polarizing outfielders in fantasy baseball drafts this spring, the 22-year-old phenom cost a small fortune (more than Kris Bryant and Joc Pederson in most cases) to acquire in auction leagues. Aside from a few flashes of brilliance, which included a home run off Cole Hamels on Opening Day, and a four-RBI, two steal performance in Boston's home opener, Betts got off to a miserable start (.246/.304/.389 with a .259 BABIP in 225 plate appearances) over the first two months of the season.

His struggles were justifiably well documented. Earlier this month, my friend (and your favorite) Matt Collins provided a stellar breakdown of Betts early season struggles, highlighting some areas for improvement at the plate, most notably a need to get more aggressive at the plate instead of falling behind in the count and chasing two-strike pitches out of the zone. It was nearly impossible to look at his .259 BABIP (nearly 40 points below the typical league average) and think that he hadn't been getting extremely unlucky. It would have been one thing if he was routinely making weak contact and posting a low BABIP, but that simply wasn't the case, which Collins astutely pointed out in his piece.

As Rob Arthur's research (which I referenced earlier) has pointed out, at a basic level, the harder a player hits the ball (in terms of exit velocity), the more likely it is to fall for a hit. Unfortunately, it hasn't felt like that's the case for Betts, despite the fact that his average exit velocity currently ranks 50th out of 295 hitters, and exit velocity on groundballs (91.23 mph) remains the ninth-highest mark in baseball this season.

For the sake of comparison, Stanton, "The God of Exit Velocity" has recorded an above league-average exit velocity 84 times, with more than half of those batted balls (52%) resulting in hits. Even when he's hit the ball hard (which are the batted balls most likely to fall in for hits), Betts has been extremely unlucky. 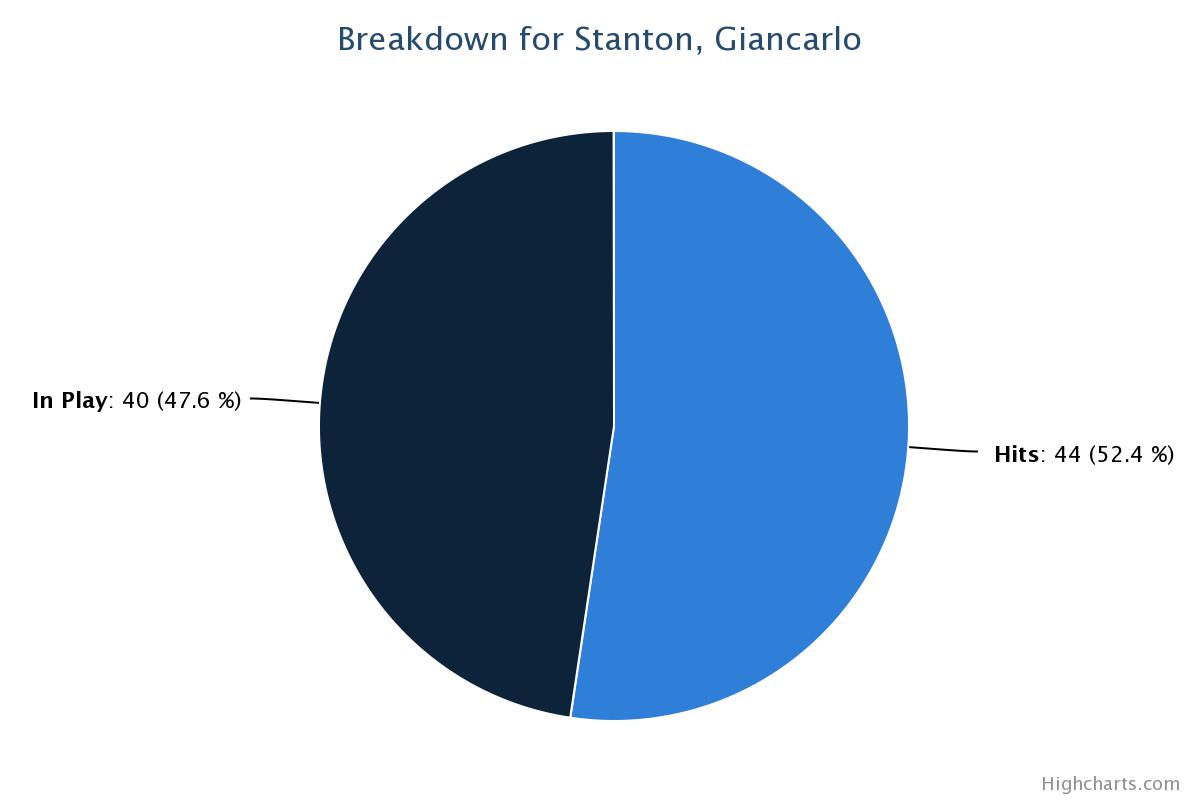 It would appear as though Betts "luck" is finally starting to turn. Since his return to the Boston lineup on June 15, after missing two games as a result of crashing into the outfield wall at Fenway Park, Betts has racked up a seven-game hit streak, while slashing an absurd .581/.594/.1000 with a pair of home runs (seven extra-base hits) and a stolen base in 34 plate appearances. It was a harrowing two months, which no doubt tested fantasy owner's faith, but it appears as though the Mookie we thought we were going to see this season is back with a vengeance.

It's been a baseball cliche since the dawn of time that all hitters are streaky, but few have been as hot as Moreland, who is slashing .303/.352/.500 with three home runs and 15 RBI in 17 games this month. If you think that his recent surge is the product of Globe Life Park (a notorious hitters park) you're gravely mistaken. Moreland has actually hit better on the road (.326 with six home runs) than at Arlington (.259 with a pair of home runs) this year.

He played in just 52 games last year due to injury and fell off the radar of most fantasy owners, despite slugging 23 dingers in 147 games in 2013. He's currently running a career-high .346 BABIP, which is 55 points higher than his career average, but the exit velocity numbers suggest that there is nothing inherently fluky about it. The 29-year-old's surprising resurgence may not be enough to stave off his inevitable exit from the Lone Star state long-term, but by all statistical indicators, Moreland is back, and fantasy owners need to start taking notice.

Evil Knievel himself wouldn't be able to clear the gargantuan chasm that divides Souza's exit velocity on fly balls/line drives (97.48 mph) versus ground balls (83.77). Out of the 295 hitters with at least 50 at-bats worth of batted-ball data, Souza ranks seventh in all of baseball terms of average exit velocity when it comes to fly balls and line drives, but 235th when he puts the ball on the ground. Those numbers are not only indicative of a ton of weak contact, when he isn't swinging and missing (32.5% K/9 this season), but are also a reflection of Souza's impressive raw power when he puts the ball in the air.

Granted there is still plenty of risk associated with Souza in dynasty formats when you consider his advanced age (26 years old) and propensity to strike out, but there is nothing inherently fluky about his ability to hit for power, which is becoming a rare skill set in fantasy baseball these days. With a few adjustments to his approach at the plate, he could transform into a monster fantasy option given his rare elite power and speed combination.

If you're looking for a prime example of the roller coaster effect that BABIP (which can fluctuate wildly at times) can have on a hitter who lacks elite batted ball velocity or the speed/approach at the plate to make up for it, look no further than Harrison. His average exit velocity (just over 86 mph) ranks 238th out of 295 hitters with at least 50 at-bats of Statcast batted ball data this season.

Unlike Souza, there isn't a great divide between his exit velocity on fly balls/line drives (89.33 mph) and ground balls (83.26). As a result, Harrison (who relied on an inflated .353 BABIP during his breakout campaign last season) is going to be more reliant on batted ball "luck" to prop up his surface stats than a vast majority of other hitters who consistently post high BABIP's and exit velocity numbers.

Here are Harrison's BABIP's by month this season: .242, .322, and .387. While it would be correct to say that his BABIP is trending in the right direction as the weather heats up, the Statcast data is just further evidence that his batted ball profile carries tremendous risk long-term. Harrison may prove to be one of the rare outlier hitters who can survive despite relying on a ton of batted ball "luck", but I wouldn't bet on it, especially in keeper or dynasty formats.

All charts courtesy of Baseball Savant.

You need to be logged in to comment. Login or Subscribe
lipitorkid
Every time I try and Google batted ball exit velocity I can find articles, but never the source for the data so I can do my own analysis. Is the source of the data available to the public?
Reply to lipitorkid
GeorgeBissell
The raw Statcast data from MLB Advanced Media for each game can be downloaded from MLB's Gameday and mobile MLB At Bat app, but if you want to save yourself a ton of time, Baseball Savant is already doing that work.

In the same way that Brooks Baseball serves as a public PITCHf/x database, Baseball Savant is the best source right now to find all of the 2015 Statcast batted ball data: http://baseballsavant.com
Reply to GeorgeBissell
GBSimons
Harrison's AEV is incorrect, isn't it? It's listed as the same as Souza's, but his rank is over 100 spots lower, and his FB, LD, and GB averages are all below his AEV.
Reply to GBSimons
GeorgeBissell
Updated. In an effort to keep the style consistent for each player header, I didn't update Harrison AEV. Good catch. Thanks!
Reply to GeorgeBissell