Manny Machado is 22 years old and has already been worth 3.6 WARP this season. The only third basemen that have accumulated more WARP this year are Todd Frazier and Josh Donaldson. Only 11 position players have a higher WARP. It’s not just his defense, either. His .315 TAv this year is better than every single qualified third baseman from a season ago, save Adrian Beltre. Say what you will about advanced metrics, these are all very good things.

In baseball, we consistently are inundated with new and exciting prospects. Seamheads couldn’t wait to see Kris Bryant explode into the big leagues this year, and he’s performed quite well. Shiny new prospects, the next big things, naturally capture our collective attention; however, young players in their third or fourth years tend to be forgotten. Take Bryant, for example, he’s a year older than Machado and has a lower WARP in 2015 — undoubtedly aided by his brief stint in Triple-A, but Machado also hit .143/.225/.257 prior to Bryant’s promotion so the Orioles’ third baseman was hardly getting a meaningful head start. The new and the unexplored always interest us more than the known present.

This is not to suggest that all baseball fans have ignored Manny Machado’s rise to greatness. His recent form has begun to grab more headlines; however, as a collective, the baseball community allowed Machado to recede into the background. Fan voting is notoriously fickle, but still, Machado is hitting .303/.361/.521 on the year with plus-defense at third base and has barely cracked the fifth spot in the AL All-Star vote.

But a superstar he is becoming. Whether it comes with enormous fanfare or not, it’s happening.

Since the beginning of May, Manny Machado has compiled a .901 OPS with 10 home runs and eight stolen bases. He’s one of only six major-league players to have at least 10 homers and 10 stolen bases thus far. He’s the no. 2 fantasy third baseman over the last 30 days and no. 3 overall in 2015. Factor in his lovely defense at the hot corner, and he becomes even more elite.

The extreme step forward has mainly occurred at the plate, and it begins with his vastly improved plate discipline. Using the metrics at Brooks Baseball, the upward trend extends across all three pitch categories, which illustrates a comprehensive improvement rather than a partial one. 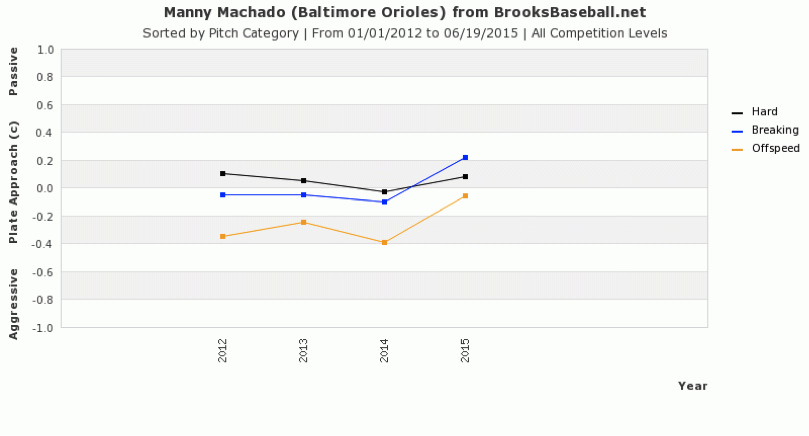 Though the above graph portrays the better patience quite well, it can be seen in other statistics, too. His walk rate has jumped three percent from last year to 8.6 percent, which is by far a career high. He has only swung at 22.8 percent of pitches outside the strike zone this year, down from 36.1 percent in 2014. That ranks 13th among qualified hitters in all of baseball. Furthermore, his swinging-strike rate has dropped from 10.9 percent to just 6.8 percent.

This isn’t just about improved plate discipline, though. It’s more about what that has done for his overall performance. It has allowed him to hit the baseball with more authority. His average batted-ball velocity in 2015 is 92.29 mph — 24th out of 289 players with at least 50 AB, just above hitters such as Jose Abreu, Albert Pujols, Lucas Duda, and Freddie Freeman. It’s no wonder his ISO has jumped to .221, almost 60 points higher than his career average.

There’s also the fact that Machado is running. Previously in his professional career, utilizing his speed hadn’t been a priority. His highest stolen-base total (13) came in Double-A in 2012. However, Machado is exploring his baserunning abilities more this year. He already has 11 stolen bases, much of which has been influenced by his leadoff role. For fantasy owners, a third baseman with the power/speed combination of Machado—not to mention his .300-plus batting average—is beyond valuable.

A year ago, Anthony Rendon took the fantasy baseball community by storm. Rightfully so, too. He was the second-base fantasy third baseman and was routinely rated as a top-10 option, before it became clear that his injury would sideline him for an extended period. Rendon’s 2014 season, though, looks rather pedestrian compared to what Machado is doing in 2015.

Granted, Machado doesn’t have the second-base eligibility that Rendon boasts, but the comparison is still instructive. Those fantasy owners who coveted Rendon prior to the season—and still do in long-term dynasty leagues—should adore what Machado brings to the table. And just to nip the objection in the bud, Machado has a .318 BABIP with a career .317 BABIP. This isn’t a situation in which luck is bolstering an otherwise mediocre profile. The 22-year-old third basemen is simply in the midst of a breakout season for which fantasy owners have been waiting for a couple years, once again showing that expecting first- or second-year players to magically become studs is unrealistic.

As for how fantasy owners should value Machado, it should be noted that he’s currently a top-10 overall fantasy player in ESPN leagues. That’s better than Anthony Rizzo, Justin Upton, and Miguel Cabrera. That’s almost 10 places higher than A.J. Pollock, who is currently the darling of the fantasy baseball community. Manny Machado is a stud and becoming a superstar in Major League Baseball. It’s time to get used to that.

Superstars are almost always “buys” when it comes to fantasy baseball; thus, this is really a question about whether Machado’s performance in 2015 is sustainable or not. He’s not benefiting from an outlandish BABIP (it’s actually in line with his career norms) and has vastly improved his plate discipline, power, and stolen-base numbers. The Florida native is also batting atop the Orioles’ lineup, which should allow him to score plenty of runs. In short, whether it’s a dynasty or re-draft league, Machado should firmly be in the “buy” camp. Perhaps it’s best to buy now, too, before owners get too used to him being a stud.

You need to be logged in to comment. Login or Subscribe
BPKevin
I'd rather not be the Debbie Downer here, but do you have any concern regarding his knees?
Reply to BPKevin
jimmyb1799
I don't at the moment, as his increased running has alleviated much of that concern. Obviously, it will be something to watch.
Reply to jimmyb1799
somerford
I traded Eric Hosmer and Justin Verlander for Machado and a mid round draft pick in my dynasty league this and was mocked. I'm returning those phone calls now.
Reply to somerford
dandaman
I'm still hoping they switch him back to short someday. Is that just wishful thinking at this point?
Reply to dandaman
jimmyb1799
Probably. I'm not sure there's much upside in moving Machado to short, to be honest.
Reply to jimmyb1799