Even before the Arizona Diamondbacks signed 24-year-old Yasmany Tomas from Havana, Cuba to a six-year, $68 million contract last winter, scouts raved about his raw power. The rest of his tools hover somewhere around average or just below, but his raw power drew 70 grades on the 20-80 scale from scouts. Tomas hit .301/.333/.580 with 16 home runs in 69 games in 2011-2012 in the Cuban National League and that was after not playing the year before. His power has the potential to be a catalytic tool, which is why so many teams were interested in signing him despite his lack of speed and defensive value. His critics will note that his power plays down in games due to both his lack of bat speed and patience at the plate and that he struggles to identify off-speed stuff, particularly against same side pitching.

Most of the teams that were interested in signing Tomas viewed him as an outfielder, but weren’t expecting him to be an asset defensively. However, the Diamondbacks were one of the few clubs at least willing to give him a chance at playing third base, which ultimately might’ve helped them sign him. Other teams were turned away by his body, which at 6-foot-2 and 255 pounds isn’t typical for third basemen not named Pablo Sandoval. Arizona was about to shock the baseball world as they tried Tomas defensively at third base, where he had minimal experience from the 30 games he played there in 2008 in Cuba, in spring training.

The Diamondbacks sent Tomas to Triple-A after a rough spring training that saw him hit just .257/.307/.414 with a 16-to-3 K:BB ratio. The early returns on his defense at third base weren’t favorable either and he’s a young man in a new land after all, so sending him to the minors appeared to be an effort to get him away from the spotlight and give him some time to adjust to his new life in the United States as well as in professional baseball. After only five games with Triple-A, though, Arizona recalled Tomas to give the D’backs another bat off the bench, which seemed curious because the entire idea behind sending him down in the first place was to let him get regular playing time away from the specter of the big leagues. No matter, shortly after Tomas was brought up, third baseman Jake Lamb went on the disabled list with a foot injury opening up playing time for Tomas.

While Tomas has basically preformed as many expected defensively—not very well—as he has a -3.5 FRAA in 31 starts at third base, his offensive performance has been a complete surprise thus far. Despite all of the reports about his outstanding raw power, he hasn’t been able to bring it into games in the majors as he has just one home run on the season. Tomas just isn’t hitting for much power at all as he’s only hit nine doubles and his .083 ISO is the 29th worst in all of baseball (min. 150 plate appearances) coming in between Jose Iglesias and Nori Aoki, and those guys could probably fit in Tomas’ pants simultaneously.

The silver lining for Tomas is that he’s making more contact than perhaps was anticipated in his first action in the majors as his 20 percent strikeout percentage is reasonable for a player with his power potential, but there are problems he needs to iron out at the plate if he’s going to realize his promise and tap into his immense raw power. For one, he needs to start pulling the ball. Tomas has so much power that it’s absolutely maddening to see that he has the seventh worst pull percentage in all of baseball (min. 150 plate appearances), or at least it should be for the Diamondbacks. He also has the eighth highest ground ball percentage in all of baseball. His lone home run this season was essentially an accident, an opposite field shot off Ken Giles in Philadelphia.

Stats in table are from 2015 season only.

While he’s slightly older and doesn’t have as much major league experience, Tomas is beginning to remind me of White Sox outfielder Avisail Garcia, who also has a large body, humongous raw power, a ground ball percentage above 50 percent and struggles pulling the ball. Garcia has tapped into his power enough to produce a .142 ISO in 189 games in the majors, but he still relies on BABIP to prop up his AVG as he’s a career .279 hitter with a career .338 BABIP. So far Tomas is overly reliant on his BABIP as his .420 BABIP is holding up his .331/.366/.414 batting line. He has a line drive percentage of 22 percent, so it’s not as if Tomas’ AVG is complete luck, he’s been making solid contact. Still, Tomas doesn’t necessarily fit the type of profile one might expect in a player who produces a high BABIP as he doesn’t have the wheels to beat out ground balls for infield hits and his hit tool is supposedly average at best. The same can be said about Garcia, who is yet to establish himself as an above average regular.

If Tomas is going to become a regular in the majors, the path to get there runs through his power as evidenced by his preseason PECOTA projection (below). At his size, he’s unlikely to make posting a .420 BABIP for an extended period of time a habit and without power and patience his battling line is headed for a crash course when the BABIP dust clears.

It’ll be interesting to see if Tomas is able to make a meaningful adjustment this season before the rest of the league adjusts to him. Pitchers should know by now that he’s a free-swinger who likes to use the opposite field and would be wise to take advantage, but they aren’t even trying to pitch him inside.

Pitchers have actually been throwing him low and away, which could be because they are afraid of the power they heard about before the season. 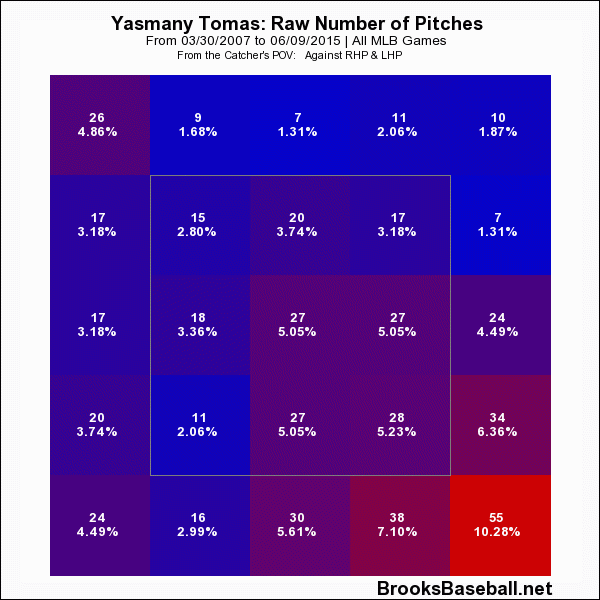 Looking at Tomas’ swings, despite his propensity to hit the ball the opposite way, he tends to swing at pitches located inside or down the middle, which is interesting because he’s not pulling the ball. 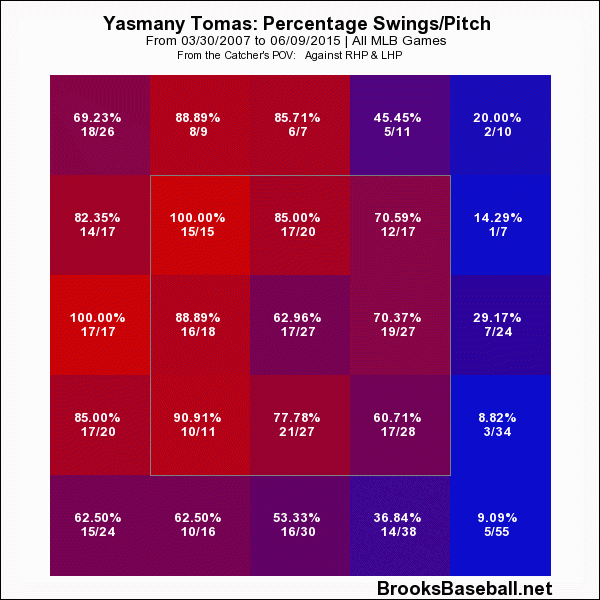 It’s difficult to say what to expect from Tomas the rest of this season because there are so many possibilities. He could go the way of Dustin Ackley and completely change his approach multiple times before this season is even over or he could stick with what he’s doing and possibly get sent back to the minors when his BABIP luck runs out. If I had to bet, well, let’s just say I’m not counting on Tomas finding his pull stroke soon.

Upon Jake Lamb’s return, the Diamondbacks traded outfielder Mark Trumbo opening up playing time for Tomas again. While Arizona still has a bevy of outfield options in Ender Inciarte, David Peralta, and A.J. Pollack, it’s clear that they want Tomas playing in the majors and outfield is the place for him to do it. For all his faults, he’s handled himself well considering the circumstances around his first couple months in the majors and likely won’t end up going back to the minors.

Looking even further down the road, Tomas can opt out of his contract after the fourth year of the deal, and if he really wants to cash in, he’ll have to tap into his power and be the player that scouts think he can be.