Armed with his signature Mohawk and a bevy of cutters, Jesse Chavez' has embarked on an improbable rise from relative obscurity to a rotation mainstay (even in mixed leagues) in one of the more underrated fantasy baseball storylines this season. His meteoric rise has gone largely unnoticed because the Oakland Athletics currently reside in the basement of the AL West. However, it’s impossible to ignore just how well he has pitched.

On the surface, Chavez owns a seemingly abysmal 2-6 record. The underlying statistics tell a completely different story. His 2.56 Deserved Run Average (DRA) ranks 19th out of 132 starting pitchers (who have thrown at least 40 innings) this year. The biggest culprit behind the lack of wins appears to be the A’s offense, which certainly hasn’t done him any favors. No starter in baseball has gotten less run support in his outings (2.00 runs-per-start) than Chavez this season.

If you’re an avid Baseball Prospectus reader, you probably subscribe to the notion that wins are an antiquated stat. No argument there, but the truth is that they still matter a great deal in traditional fantasy leagues, which have been hesitant to embrace quality starts as a greater indicator of a pitchers performance than wins.

The number of wins a pitcher accrues is what ultimately drives up his fantasy value more than any other statistic when we look back on previous seasons. This is especially true if the pitcher simply isn't that good to begin with. The most striking recent example of that phenomenon is Matt Shoemaker, who racked up 16 wins with the Angels last season despite a 3.81 DRA. In 2015, he has still managed to somehow pick up three wins (one more than Chavez) despite a 5.07 DRA, which ranks 99th out of 132 starters.

Chavez isn’t Sonny Gray, who leads all starters with a minuscule 1.19 DRA, but he has pitched brilliantly and has almost nothing to show for it in the win column. Through 64 2/3 innings of work, he has struck out 56 batters (7.79 K/9) while issuing just 16 free passes (2.23 BB/9). More importantly, he has avoided implosions, posting a quality start in six of his nine outings without ever allowing more than four earned runs in any start. He’s also recovered nicely from a mild case of gopheritis (17 home runs in 146 innings last year), allowing just three longballs (all of them on the road) so far this year.

The most compelling evidence that Chavez early season performance is no fluke are his markedly improved numbers against right-handed hitters. He’s having more success against them than Ron Swanson versus a plate of bacon and eggs, boasting the 14th-best true average (.208 TAv) of any starter in the game this season. 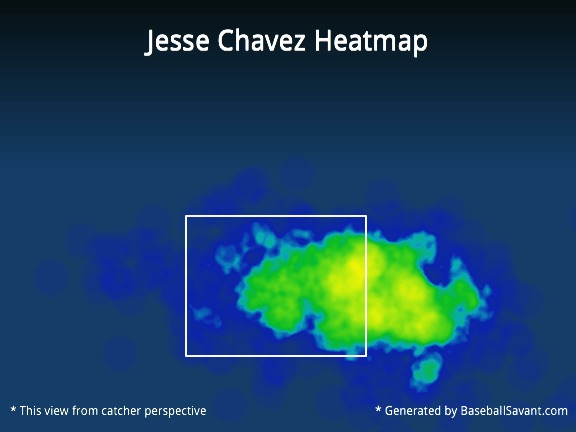 His newfound reverse platoon split represents a dramatic change from a year ago, when left-handed batters gouged him for a .281 TAv, one of the worst marks of any starter in baseball.

Chavez has done it simply by taking a page straight out of the Bartolo Colon game plan and breaking out his paintbrush. Not only is he throwing fastballs (four-seam, sinker, and cutter) nearly three-quarters of the time, but when you combine all of that movement and pinpoint control on the outside corner, right-handed hitters find it nearly impossible to square him up.

It’s might be cliché, but a fastball on the outside corner, low and away, is the toughest pitch to hit for right-handers. As you can see from the PITCHf/x zone profile data on Brooks Baseball, Chavez has lived on that outside corner all year. 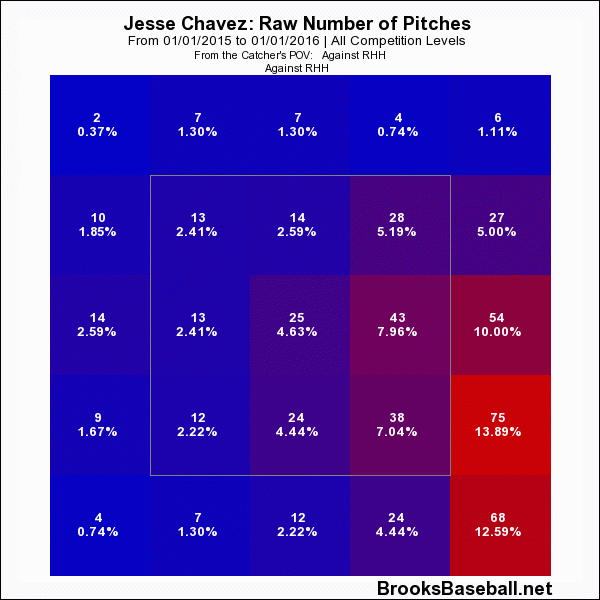 Elite right-handed sluggers are still going to do some damage against him, just like Red Sox outfielder (in name only) Hanley Ramirez did over the weekend. However, Chavez' new approach (avoiding the inner half of the plate and keeping the ball down) is generating some outstanding results. When Chavez is enticing righties to go fishing, low and away, they're coming up empty-handed. 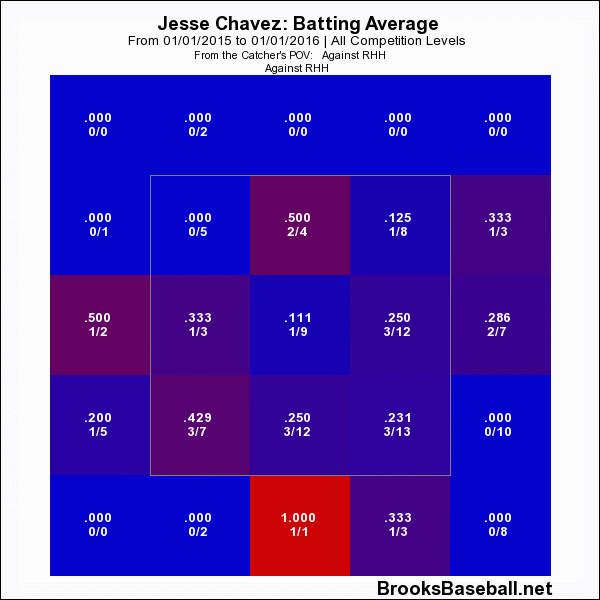 To say that Chavez performance has been a surprise would be putting it lightly. He failed to crack Baseball Prospectus’ Top 300 list in March and was pretty much an afterthought, even in the deepest of leagues, given the A’s rotation depth and the emergence of youngster Kendall Graveman in spring training.

The lack of wins (and dramatic second-half slide a year ago) makes Chavez an attractive trade candidate because some of the less advanced-statistic-savvy owners in your league may overlook just how good his performance has been this year and be willing to deal him away for less than full value.

If you’re looking to project Chavez going forward, Contextual FIP (cFIP), which is a predictive pitching estimator, believes that he will remain one of the most valuable starters in the game going forward. Realistically, Chavez isn’t quite an ace (and lacks that type of upside), but then again, he won’t cost anything close to that to acquire in a potential trade. If value (which we talk about a lot in fantasy baseball) is the gap between acquisition cost and actual on-field production, I’m not sure there is a better fantasy trade target than Chavez right now.

You need to be logged in to comment. Login or Subscribe
hyprvypr
I must say, Chavez is one reason any fantasy owner worth their salt needs to watch games regularly. I watched him pitch two or three times in the last few years and despite mediocre results in those starts, he showed outstanding savy, command of 2-3 average+ pitches and most importantly to my eyes, baseball smarts. You could see him making adjustments to the players but more so to the umpire. This is just part of the intangible element players have or maybe don't have. Chavez has it.