After a solid big-league debut against the Rays on May 20th in which his fiery mound presence stole the show, I spotlighted Perez as an interesting two-start candidate last week, and he responded with 13 innings of one-run ball and wins against the Dodgers and Giants. That brings his tally to 18 innings as a starter in which he’s allowed two runs while collecting 17 Ks. So who is this guy, and how much value, if any, does he have going forward?

An unheralded international signee out of Venezuela, Perez made his stateside debut as a 19-year-old in 2010. After a couple of seasons in Rookie ball, he’s been a level-a-year player as a solid-if-unspectacular rotation piece, with an arsenal built around a sinker/changeup combination that’s gotten him grounders and limited his vulnerability against left0handers. Over the past three seasons through High-, Double-, and Triple-A, he’s posted ground-ball rates north of 50 percent with a 3.61 FIP against lefties compared to a 3.20 mark against right-handers.

Perez’s arsenal certainly isn’t overwhelming, but he’s managed to put together three pieces that look like they play well together. Small-sample-size warning logged with flashing red font: He’s shown a significant reliance on the two-seamer as his primary weapon thus far in Atlanta, and it’s a really interesting pitch. It actually features well below-average “sink” relative to other two-seamers, with just a 34-grade on the vertical movement. His distribution of the pitch is also interesting: 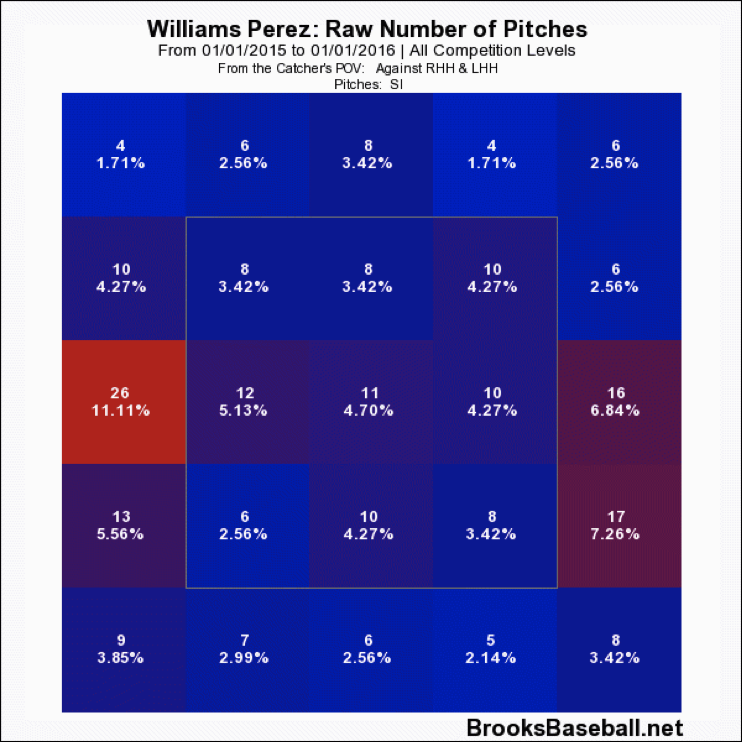 Rather than pounding the lower portion of the zone, he’s instead worked it to the margins east and west. And so far, so good: His ground-ball rate with the pitch has checked in at a robust 62 percent thus far, and it has elicited weaker-than-average contact.

The ground-ball and weak-contact profile is an extremely enticing one given the presence of all-world shortstop Andrelton Simmons behind him. Jace Peterson also rates among the better keystoners in the game at present, and the upgrade from Chris Johnson to Juan Uribe at the hot corner has the potential to be substantial (a whopping 25 fielding runs by 2014 numbers, on pace for 10-12 by early ’15 numbers). To this end, it’s probably fair to assume some modest misfortune on his balls in play to date, as hitters have posted a .333 BABIP despite the elite worm-burning and caliber of infield defense.

There’s also the matter of Perez’s whiffs so far, which have pleasantly outstripped his minor-league production. Chalk it up to success with the changeup. He’s induced swings on over half of the 53 cambios he's thrown now, and he's rocking a well above-average 21 percent whiff rate with the pitch. However, this, too, is a pitch that moves less than your typical changeup, which doesn’t bode well for its continued success as major-league hitters get more looks.

Given the velocity and movement shortcomings, it’s prudent to bet on some regression in the batted-ball profile and whiff rate, and his control has been a liability to date with a walk rate north of 11 percent. Still, he’s in a strong situation for his skillset with an outstanding infield defense behind him and one of the better pitching coaches in baseball, Roger McDowell, guiding his plan of attack.

I remain somewhat bearish on Perez as a long-term asset in mixed leagues on account of the lack of a supporting track record and average stuff, but he’s lined up for an interesting schedule in the near future. This scoring period he’ll draw a favorable matchup against a Pirates team that has struggled away from PNC Park and has the fourth-highest collective ground-ball rate in the majors. And then, assuming he’s safe in the Braves rotation for the time being and they remain on schedule, he’d be on pace to draw two more top-10 ground-ball teams in the Padres and Red Sox.

It adds up to an enticing-enough package to warrant a couple of FAAB dollars in medium-depth mixed formats and $5 or $6 in NL-onlies in which he remains unclaimed.

You need to be logged in to comment. Login or Subscribe
comish4lif
Do, he should be a solid injury replacement for Strasburg in a 12 team, NL only league?
Reply to comish4lif
BuckarooBanzai
Well, a pitching machine throwing 82'd probably be a suitable replacement for the production you got from Stras before he went down. I like Perez's match-ups for the next couple weeks, and he's shown enough intrigue in his moxie and execution that yes, he makes for a nice WW grab in an -only league that deep.
Reply to BuckarooBanzai