It’s an exciting time to be coming aboard here at Baseball Prospectus. You’ve already heard from some new voices over the last few weeks in Greg Wellemeyer and J.J. Jansons, and I’m proud to be joining them in contributing the fresh, hot fantasy baseball content you’ve come to expect week-in and week-out.

Injecting a plethora of new faces into the fantasy rotation is just the tip of the iceberg. The entire fantasy team, which you have grown to know and love, is embarking on an exciting challenge with the brand-new Baseball Prospectus fantasy app. It’s the first of it’s kind and best of all, it’s free. In the latest edition you'll find:

Now let's get down to business. It’s no secret that baseball is a narrative-driven sport in which every season proceeds according to a script, written only in retrospect. Often, the most compelling storylines are the ones we didn’t anticipate having even a remote chance of occurring. The greatest personification of an outlier in fantasy baseball today is Chris Young, a 36-year-old journeyman gobbling up innings for the Kansas City Royals this season.

When Baseball Prospectus unveiled Deserved Run Average (DRA) last month month, it marked a revolution in the way we approach how much responsibility a pitcher has over the runs he allows. It’s also revealed something extraordinary about Young’s performance this season. His 3.21 DRA ranks ninth among all starting pitchers, one spot ahead of reigning AL Cy Young Award winner Corey Kluber. If I were to take a photo of that leaderboard, you would ask me how I Photoshopped Young into it.

In 11 appearances (five starts), Young owns a stellar 1.55 ERA and 0.86 WHIP with 30 strikeouts and just 11 walks in 40 2/3 innings of work. Sure, he won the American League Comeback Player of the Year Award with the Seattle Mariners by posting a 3.65 ERA over 29 starts last season, but given his age and frightening injury history, he barely found any market as a free agent last offseason. He eventually latched on with the Royals in early March to augment an already-loaded bullpen. Nobody could have anticipated that he would transform into one of the leagues most valuable starters according to the most advanced metrics we have to gauge pitcher performance.

Some Guys Have All The Luck

Not only is he on pace to join this exclusive list for a fourth time, but also he could eclipse the all-time mark set by Jeremy Hellickson in 2011 (.224) by a country mile this season. It’s difficult to see in the numbers, but extreme fly-ball pitchers, like Young, are capable of running extremely low BABIPs, because home runs don’t count against them, and with fewer ground balls, there are less opportunities for hitters to exploit weaker infield defenses. It makes sense.

Young isn’t just sitting in the clubhouse charming the luck dragons with voodoo rituals, like Pedro Cerrano in Major League. His extreme fly-ball tendencies, combined with the spacious dimensions of Kauffman Stadium and the Royals' stalwart defensive outfield, are the perfect recipe for a historically low BABIP.

He’s currently sporting a microscopic .186 BABIP. There’s little doubt that number will rise as we enter the dog days of summer and the ball starts to carry more in the heat. However, it’s worth noting that some subtle improvements to Young’s arsenal and approach (which I will touch on later), along with arguably the best defensive outfield in the game, have been the catalysts in an experiment, which has transformed Young from a replacement level fantasy option, into a valuable cog in a rotation.

Deconstructing the factors that result in a pitcher’s BABIP is an extremely complicated process. The best explanation we have for Young’s early season performance, which you can see from the PITCHf/x data from Brooks Baseball, isn’t that he’s generating a higher percentage of flyballs this season, they’re just not falling for hits. 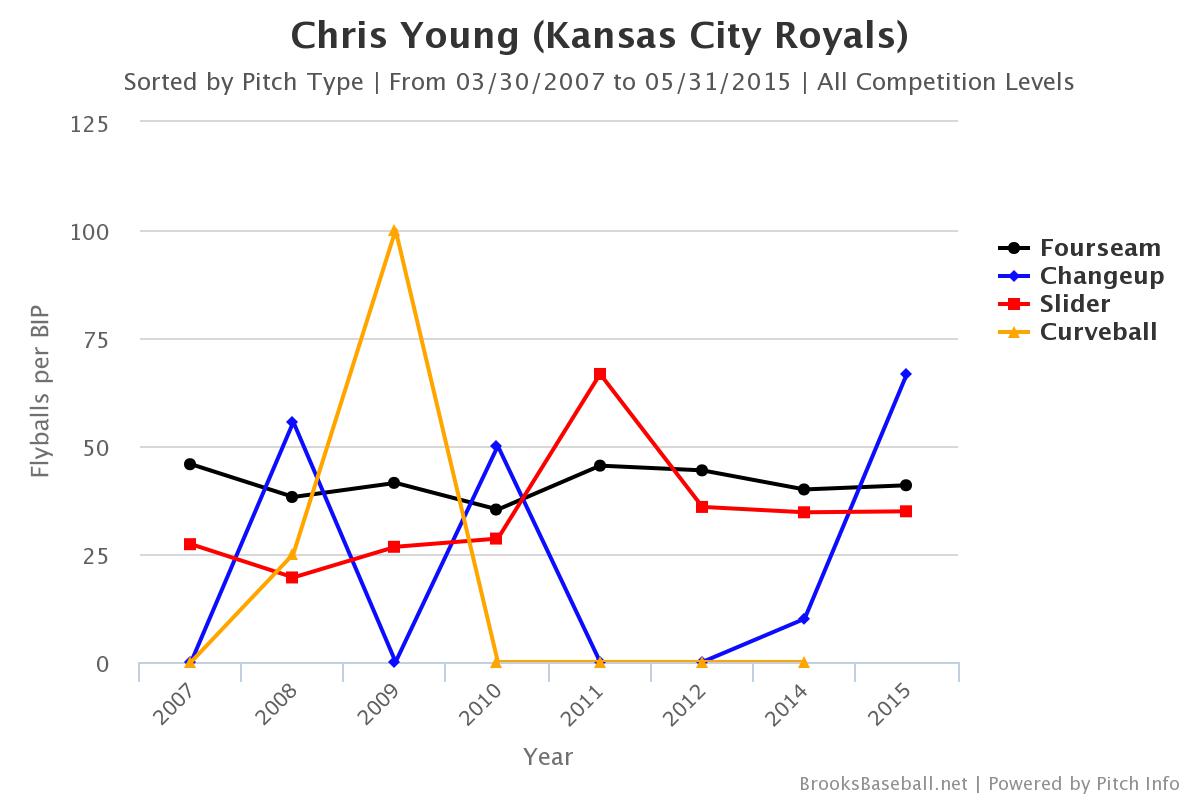 How much of that is the result of excellent defense or the ballpark? That’s the million-dollar question, which we can’t solve by just looking at the numbers. We know that Young isn’t just an extreme fly ball pitcher. He’s an outlier among that group of starters as well. Only Asher Wojciechowski (as much fun to say as it is to spell) has posted a lower GB/BIP ratio than Young’s 21 percent mark this season. Wojiechowski’s BABIP, in case you were wondering, is .356.

Based on all of the evidence we have at our disposal, most notably the fact that he has allowed just three home runs this year, opposing hitters are simply having a tough time squaring him up and driving the ball. He’s done this before, just not to the extreme level that we are seeing this year.

It’s natural to look for possible explanations in the PITCHf/x data when it comes to explaining the performance of an albatross like the six-foot-eight, 255-pound Young. What stands out immediately is that he’s throwing nearly twice as many sliders as he did the previous year in Seattle. 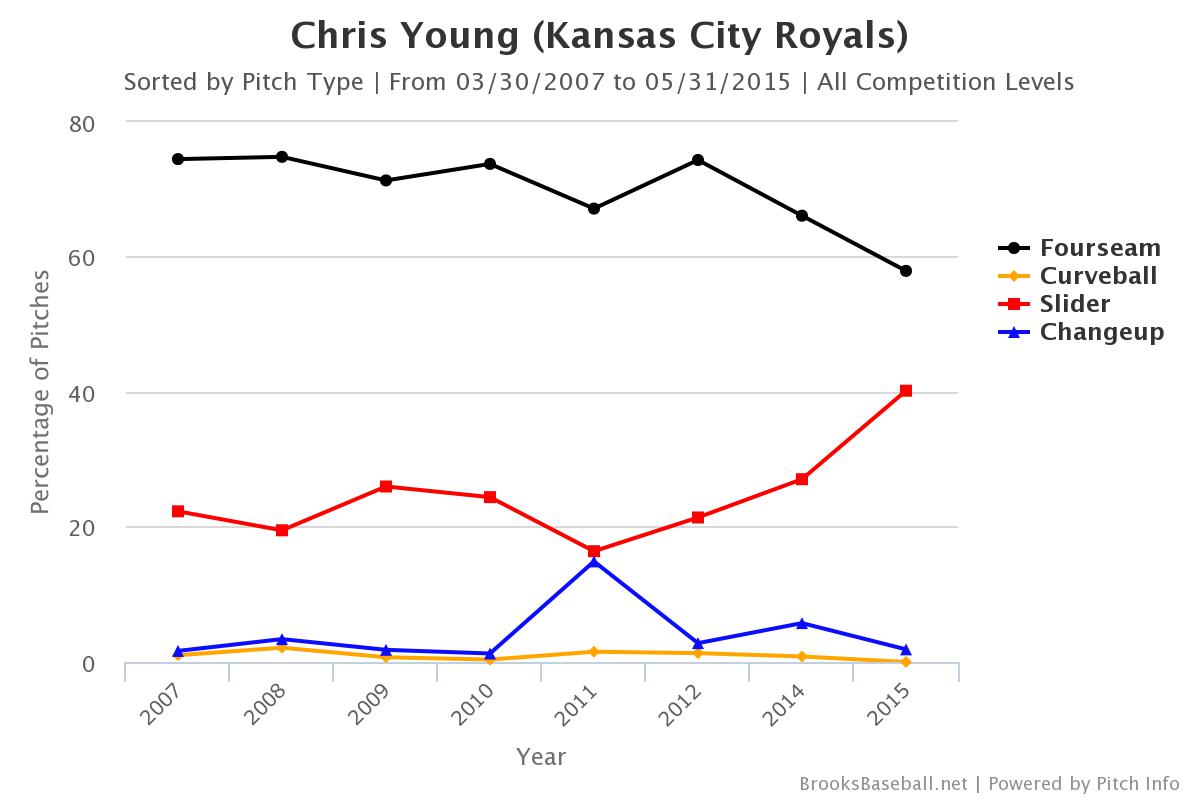 He’s also generating more whiffs by opposing batters on them crooked vultures (19 percent) than at any other point in his career. He’s throwing his slider more than ever before, and he’s getting opposing hitters to swing and miss at it. Another noticeable change for Young this season is the fact that he is generating more velocity on his fastball than he has at any point since 2008. He’s up to 87 mph, which is up nearly a full mile-per-hour from last season. Some of that can be chalked up to his usage out of the bullpen to start the season, but he has eclipsed 86 mph in average velocity on his heater in every start since May 10th. 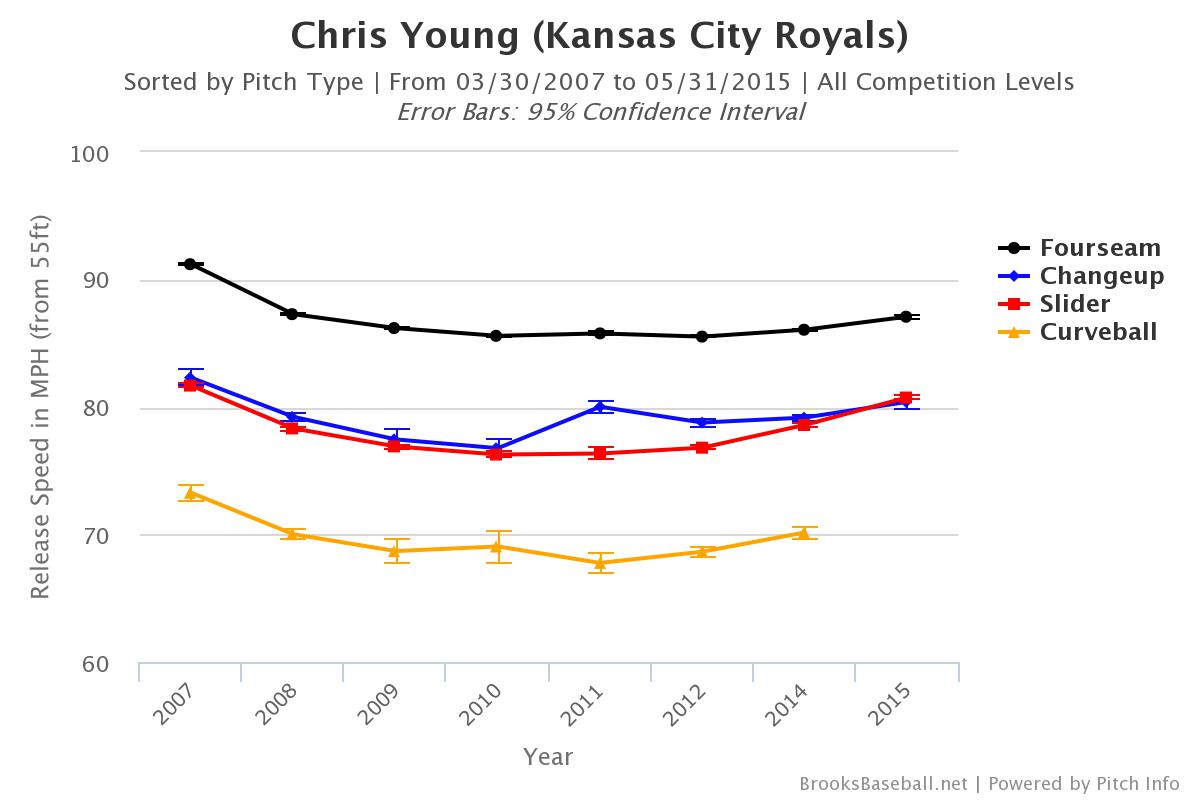 Young lacks the strikeout upside (6.64 K/9 this season) to truly become an elite fantasy starter, but by posting the lowest walk rate (2.43 BB/9), home run rate (0.66 HR/9) and BABIP of his career, he’s become one of the most valuable fantasy assets among all starters this season. For a guy who is throwing essentially two pitches, it’s almost unfathomable that he can get this lucky for this long. 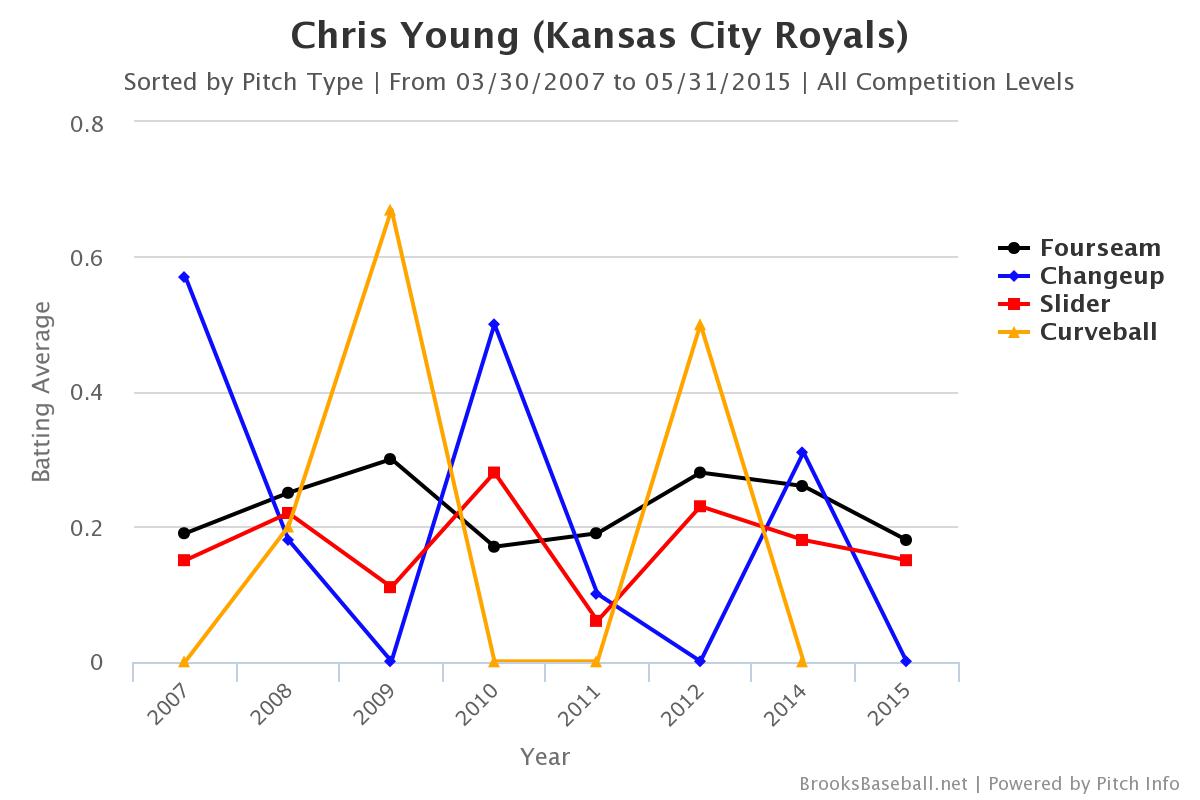 The predictable regression may be underway already. In his last start in Yankee Stadium, he served up a pair of longballs and suffered his first loss of the season. The bulk of the damage came when he hung a slider to Alex Rodriguez, who promptly parked it into the left field bleachers for a three-run shot.

Young’s lengthy injury history is his biggest detractor, but he’s stayed healthy for the better part of two seasons now and given how risky his profile appears on the surface, he likely won’t cost much to acquire in a trade if he’s even owned in most fantasy leagues.

Young isn’t a fantasy superstar. Which makes it so strange that he’s been one of the best pitchers in the game, statistically speaking, through 40-plus innings this season. Fantasy titles are won by bold decision-makers, and flags fly forever, so based on the relationship between Young’s performance and what it is going to take to acquire him, the potential risk is worth the reward.

What makes Young so intriguing to watch (and own) going forward is the fact that he’s fighting a battle that isn’t so much against opposing hitters, but against seemingly invisible factors that are beyond anything he can control once the ball leaves his hand. No matter how you slice it, there isn’t anyone else even remotely like him in fantasy baseball.

You need to be logged in to comment. Login or Subscribe
sldetckl16
As someone who bought him in my 14 team H2H points league a couple weeks back - I enjoyed the detailed breakdown of why I may want to hold him instead of trying to sell high when no one else really appreciates his value. Look forward to more of your work. Thanks
Reply to sldetckl16