Listen to a hitting coach or a television broadcast long enough, and the term “controlling the strike zone” is bound to surface. It has become synonymous with plate discipline or, even more simply, a batter’s “patience” at the dish.

In The Book, Tom Tango, Mitchel G. Lichtman, and Andrew E. Dolphin discussed “controlling the strike zone” and represented that skill through a simple walk-to-strike ratio, and ultimately, that has become baseball-shorthand to discuss plate discipline. Bill James used strikeout-to-walk ratios to represent a hitter’s ability to control the strike zone. More in-depth statistics exist, such as O-Swing% and swinging-strike rate. In the end, though, the mark of a mature and patient hitter at the plate is assumed to be K:BB or BB:K.

While such ratios may be (very) useful representations of a player’s plate discipline for statistical analysis, “controlling the strike zone” is more than balls and strikes, or walks and whiffs. I was talking to a professional scout a couple years ago about a young, high-contact hitter in the low minors. The player didn’t walk much, nor did he strikeout much—thus his K:BB was quite good for a 19-year-old in A-ball. The scout noted that the player needed to learn to control the strike zone better, which threw me for a bit of a loop, given his quality ratio.

That distinction stuck with me. Perhaps truly controlling the strike zone is being able to discern which strikes are quality ones and which are unappealing strikes, if that makes sense. And I don’t think a “good strike” and a “bad strike” is going to be uniform between hitters. Approaches, swings, and body types all vary too much for that to be true.

Take Mike Trout last year, for example. He recognized that opposing pitchers had begun to exploit his weaknesses up in the strike zone, so the 2014 AL MVP worked all offseason to close that hole in his swing. According to Mike DiGiovanna at the Los Angeles Times, Trout has only swung-and-missed on 15 percent of pitches in the upper third of the zone.

However, I believe one can also learn to control the strike zone through laying off certain strikes, rather than making swing alterations. Few baseball players are as talented as Trout that they can spend a single offseason working to fix swing defects and successfully do so. For some batters, controlling the strike zone can simply mean knowing which strikes to attack and which strikes to avoid.

At only 25 years old in the 2012 season, Josh Reddick mashed 32 homers and hit .242/.305/.463 for the Oakland Athletics. He was a four-win player and offered quality defense in right field. Many thought he was poised to become the next great power hitter in the American League. Fantasy owners also coveted the fact that he stole double-digit bases that year, providing a potential elite power/speed combination.

Injuries limited his playing time in both 2013 and 2014, but questions regarding his abilities at the dish also cropped up. After hitting 32 homers three year ago, he followed up with consecutive 12-home-run campaigns. Things got ugly in 2013 when he only hit .226 and was a below-average hitter in the American League.

After many wrote him off, though, Reddick has exploded in 2015 with a .314/.382/.536 slash line and seven home runs in just 170 plate appearances. His .222 ISO is a career high, and he hasn’t hit over .300 since his stint in High-A for the Red Sox in 2008. He is the 14th-ranked fantasy outfielder in ESPN leagues and has been a top-30 overall player over the past month. Not bad for an outfielder who was barely being drafted among the top-70 outfielders prior to the season.

Some analysts have pointed toward Reddick’s improved plate discipline this year. He’s swinging at fewer pitches out of the zone, and he’s also whiffing less often. His strikeout rate has correspondingly dropped and his walk rate this year is above his career average. In fact, his 0.94 BB:K ranks amongst the best in baseball.

Every one of the above hitters possesses a wRC+ above the league average. This is obviously a desirable list on which to be. As numerous studies have shown, the better a player is at taking walks and avoiding strikeouts, the better that player’s overall offensive production will be

I’m more interested in how this happened for Reddick. After all, he has a career 0.42 BB:K, so it’s safe to suggest that no one expected this from the 28-year-old slugger. What is Reddick doing differently that is resulting in much better plate discipline numbers?

As alluded to above, I believe the answer lies in his increased ability to discern which strikes are good strikes for him. Perhaps this is simply increased maturity as a hitter; however, our readers will assuredly agree that dramatically improving one’s walk-to-strikeout ratio is not a standard stop on the development curve.

It appears on the surface that Reddick has improved his plate discipline by swinging less often. His 40-percent swing rate is the lowest mark of his career, by far, and is eight-percent lower than his career average. He’s paired that less-aggressive approach with a more contact-oriented approach. His 84.9-percent contact rate is also the highest of his career.

It’s not as easy as swinging less often and making better contact, though. It’s my contention that Reddick has learned to lay off strikes in the upper-third of the strike zone and has learned that his greatest success comes through the fastball. The combination of those two things has helped him get off to a great start in 2015.

Reddick regularly swung-and-missed between 2013 and 2014. 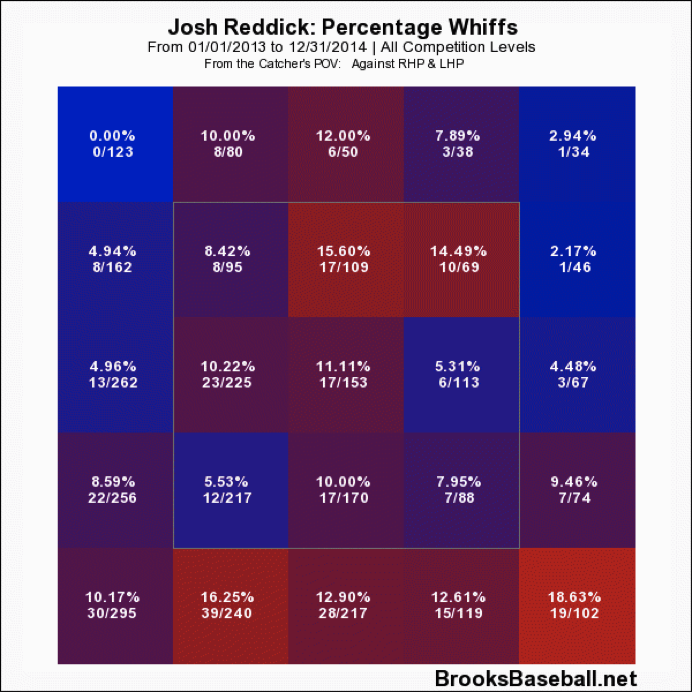 The struggles down in the zone and above the strike zone are notable, but within the zone, it’s clear that Josh Reddick couldn’t handle pitches in the upper third of the strike zone—especially up and in. When he could get his arms extended on the outer-third, it appears he didn’t whiff as much. Looking at the heat map, though, it’s not difficult to determine where he struggled in the zone. 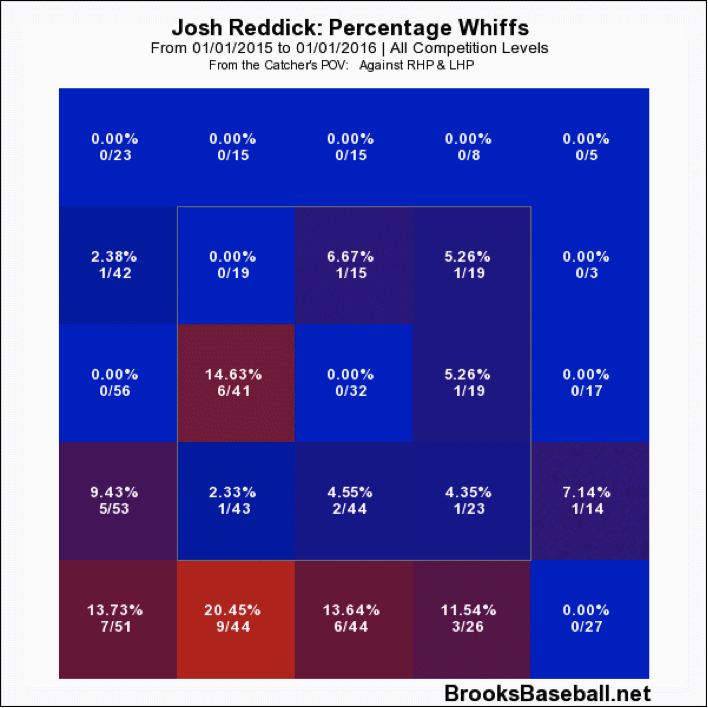 Granted, the entire heat map has improvements, but the most-striking progression comes at the top of the strike zone. He’s swung-and-missed just twice at pitches in the upper-third this year. That’s massive. In fact, he’s swinging at 20 percentage points fewer pitches in that zone. Thus, if we combine the fact that he’s swinging less overall with the fact that he’s specifically avoiding pitches up in the zone, which then results in fewer whiffs, it appears Josh Reddick is “controlling the strike zone” better than he has in years past. At the very least, we can seemingly say that Reddick better understands where he does damage and where he does not.

It’s no coincidence that Reddick’s fly-ball and infield-fly percentages are down this year, and his line-drive percentage is a career-high 23.7 percent. He’s avoiding more pitches up in the zone, waiting to attack pitches that are better suited for him and his swing. That, thus far, has resulted in success.

It should further be noted that Reddick’s swing percentage has specifically dropped against fastballs. He swung at 49.73 percent of fastballs a year ago. That number has dropped over 12 percent to just 37.44 percent in 2015. Reddick has much smaller declines, just 2-4 percentage points, in his swing rate against breaking balls and offspeed pitches.

I want to stress that this is provisional, as we’re only able to work with two months’ worth of data to this point. Additionally, Reddick hasn’t changed his function as a player. He’s still a platoon hitter who struggles against lefties. He’s only hitting .176/.243/.235 versus southpaws this year. Thus, he hasn’t become an everyday stud for fantasy owners; however, he does appear to have figured out who he is at the plate. He’s controlling the strike zone, taking advantage of pitches that give him a high likelihood of success, while avoiding pitches (even strikes) that have traditionally given him trouble.

While I appreciate the adjustments he has made at the plate this year, I’m not convinced that’s going to turn into massive fantasy success. He’ll remain a platoon bat for owners who can best utilize him in daily leagues. Additionally, his .344 BABIP against righties will likely regress over the coming months. And for Reddick to be an above-average outfielder in mixed leagues, he needs to be more than a decent platoon outfielder with some pop. He needs to be Brandon Moss circa 2013 or Lucas Duda circa 2014. He needs to mash right-handed pitchers to make up for his inability to be playable against lefties. If he’d offer 10+ stolen bases again, perhaps that’d be a different story, but Reddick only has two thus far and doesn’t appear to be a prime speed threat. Maybe he’ll flirt with double-digits like 2012 and 2013, but he only swiped a single bag a year ago and isn’t active on the basepaths this year.

If the price tag isn’t exorbitant, I can understand targeting Josh Reddick, especially in AL-only leagues. His stock has risen because of his changes at the plate. But it’s unlikely that fantasy owners are going to be selling Reddick as if his first two months were a fluke. Owners will have to give up something legitimate to grab him, and I’m not sure he’ll mash righties enough to be an above-average option in all formats going forward. Again, perhaps the power potential is good enough to make him worth it in AL-onlies, but not in mixed formats.

In terms of making adjustments and becoming a better real-life hitter, it appears Josh Reddick has taken a significant step forward. In fantasy, though, given the limited applicability of his skill set, it’s not going to be as attractive once the BABIP starts to decline against righties. He’ll really have to hit for power to be above-average as a platoon bat. It’s not worth trading legitimate assets to acquire him, only to see his production level off. If you drafted him, though, enjoy the benefits. Just don’t expect Reddick to carry your squad.

You need to be logged in to comment. Login or Subscribe
lewist
When looking at Reddick's elite production after the All Star break last year, I might suggest we all whiffed in drafting a player we should draft, rather than a player we could!
Reply to lewist