Lucas Duda entered the 2015 season as a prototypical middle-of-the-order slugger, a reasonable bet for 25 home runs and potential to dent your batting average. Duda sat on top of the three star tier in our preseason first baseman rankings, effectively placed inside the top 12 and therefore a starter at the position in most leagues. True to the profile, his history includes a patient and pull-heavy approach and he has struggled against same-side pitching.

We’re one game away from the quarter pole and damn near everything has changed for Duda. All of a sudden he looks like a much better hitter but his adjustments have come at the expense of his fantasy value. He’s hit only three home runs and driven in 15, though the Mets subpar offense bears some responsibility for the latter.

You can read more below if you’re not in to the whole brevity thing but the short version is that Duda is hitting line drives at a league high rate, going the opposite way much more often, being more aggressive, making more contact, and faring well against lefties. What does this mean for his fantasy value? I’m not exactly sure!

Among qualified batters, Duda’s 32.9 percent outfield-flyball rate was the third highest in the majors in 2014, trailing only Curtis Granderson and Brandon Moss. Combine that frequency with a 298 foot batted ball distance that ranked 22nd and the result was 30 round trippers, good for third most in the senior circuit. The home run production has dried up in 2015 and the reason is a fairly extreme redistribution of his batted balls. Whereas Duda has been a fixture among fly ball leaders most of his career, his current 42.1 percent line drive rate leads the majors while his outfield fly ball rate has dropped to the middle of the pack. His ground-ball rate has also declined by roughly four percentage points, but it ranks among the lowest in the league, as it has throughout his career.

The reason for the change lies in Duda’s newfound willingness to take the ball the other way. According to data from Baseball Info Solutions, the 21.2 percent of the time that Duda hit the ball to the opposite field was the 21st-lowest number in 2014. Here’s your visual evidence of his pull-happy and up-the-middle approach: 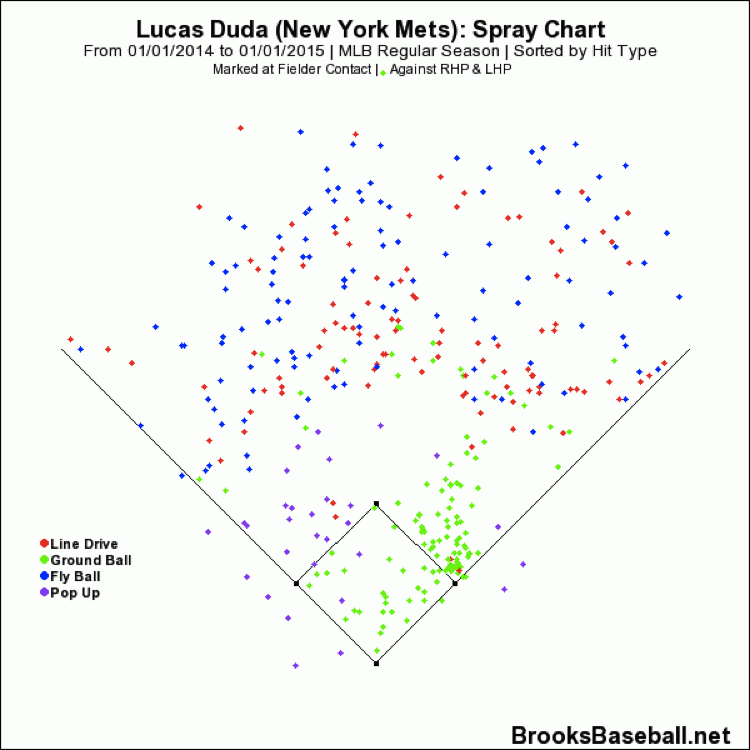 Through the first 162 plate appearances of this season, Duda has dropped his pull rate from 44.1 percent to 33.6 percent (23rd lowest among 84 qualifiers) and is going the opposite way seven percentage points more often; his 28.0 percent is 29th highest rate. Here’s the picture: 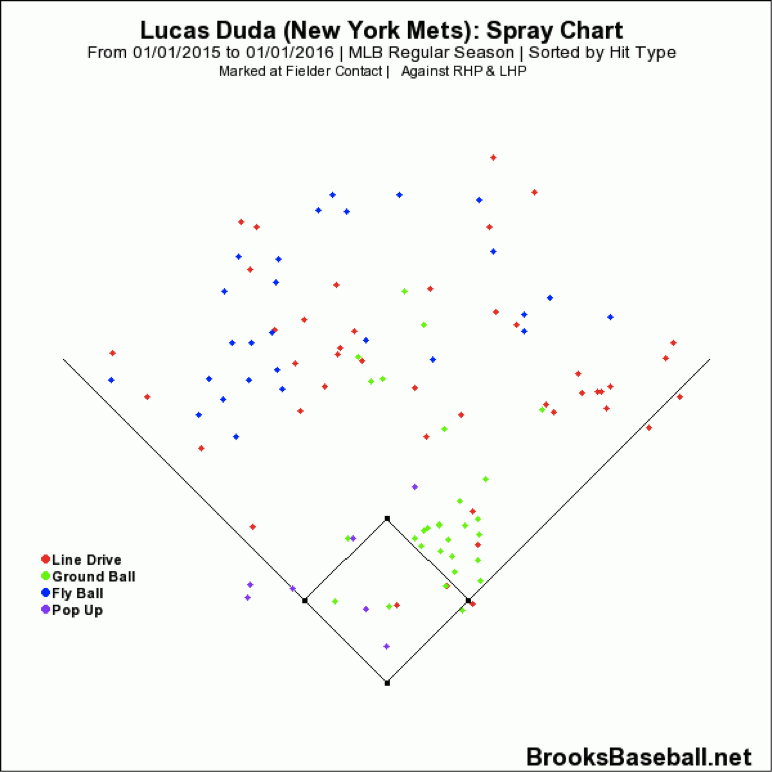 In addition to the power outage, the sum of these changes is a .293 batting average that’s supported by a .365 BABIP. That batting average is a 40-point improvement over 2014 and a 50-point bettering of PECOTA’s preseason projection. You’d expect a player hitting a mess of line drives to post an above-average BABIP but it goes without saying that you should expect some regression in both the line drive rate and the BABIP even if these are real changes that Duda sustains to some extent. For context, last year’s line drive king, Freddie Freeman, finished with a 34 percent line-drive rate and a .351 BABIP.

As you might expect from large-bodied power hitter, Duda has always had a patient approach and his contact rate has consistently lagged behind league average. He’s still passive relative to the rest of the league but he’s been more aggressive on pitches both in and out of the zone this year. The bigger change is his contact rate; his 81.8 percent rate now ranks comfortably above the league average of 79.2 percent. That’s quite a change from the 74.9 percent rate Duda posted in 2014 and an even greater departure from the 71.5 percent mark in 2013 that was a bottom-20 figure and placed him next to J.P. Arencibia and Drew Stubbs on the” leader” board. His current number has him between Howie Kendrick and Lorenzo Cain. That’s better company to keep.

Further, his improvement has been across all pitch types: 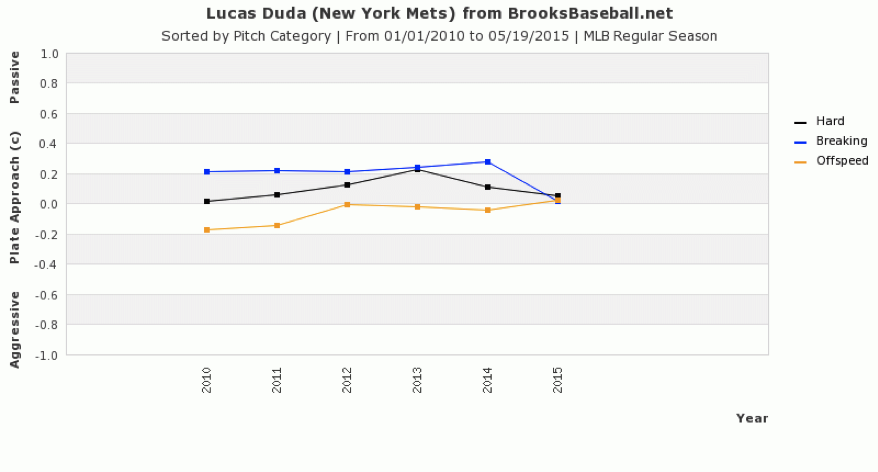 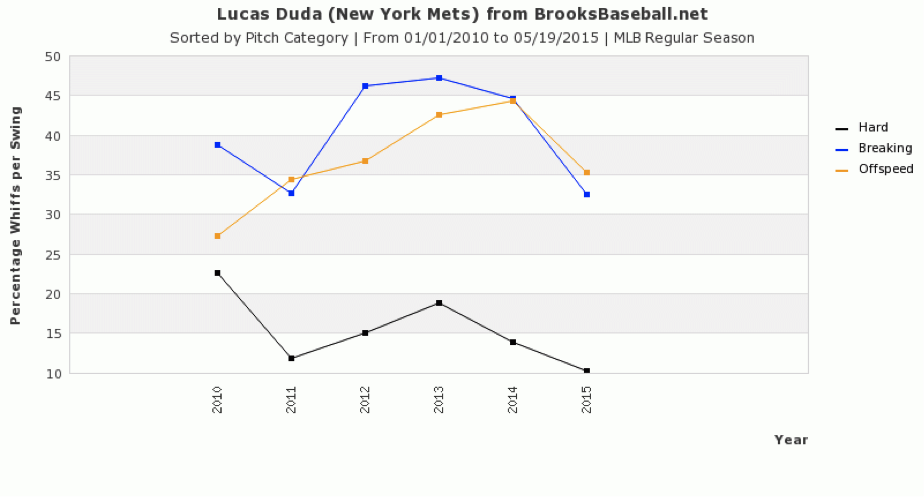 With the exception of an increase in whiffs per swing on offspeed stuff from 2013 to 2014, Duda has been improving each of the past two seasons and has seen a sharp drop-off in his whiff rate against secondary pitches in 2015.

Duda’s problems against lefthanders were frequently cited after a 2014 season where he hit .180/.264/.252 against them. Had he registered another handful of at-bats, his wRC+ of 54 would have been eighth worst among qualified batters. That’s Dustin Ackley bad but not quite Jay Bruce bad. It’s worth noting that things weren’t always this was for Duda. Back in 2011, when he received his first semi-regular playing time, Duda’s OPS against same-side pitching was .705. That wasn’t too far off the league average of .731 and certainly something the Mets and fantasy owners could tolerate considering he went .888 against righties.

The 2015 season is young enough that drawing conclusions from splits is premature and dangerous, but Duda is having early success against lefties. In his first 41 plate appearances he’s slashing .390/.444/.585 including two home runs, which matches his 2014 output.

The above analysis about swing rate, whiff rate, and batted ball shifts holds when we look at the splits. Duda has been much more aggressive against lefties in 2015 than he was in 2014, swinging at 44.67 percent of pitches against just 40.54 percent last season. His whiff rate has declined by almost four percent. Most importantly, the percentage of pitches Duda has hit for line drives has more than doubled. Interestingly, much of the progress he’s made has been against the slider, oftentimes the most difficult pitch for a left-handed batter to deal with from a left-handed pitcher.

Perhaps some of this is a result of having new hitting coach and fellow lefty Kevin Long throwing him batting practice every day, perhaps it’s normal development, and most likely it’s just good old-fashioned small sample size noise. In any case, it’s something to keep an eye on.

You probably made your way here and just read a thousand words expecting that I’d have a recommendation. If that’s the case, I’m sorry to say I don’t have a strong one. What I see is a player who showing signs of becoming a better all-around hitter, but that’s not what you drafted him for. What you probably need from Duda are home runs and RBI, not batting average.

It’s hard to hit the ball over the opposite field fence on a line, so unless all of this is an early season data quirk or Duda reverts to some of his old habits, he’ll have trouble approaching the 30 home run plateau he achieved in 2014. Summer is coming and so is some level of regression to his career norms, so it’s not time to completely panic in the power department. As for the RBI, the Mets are a bottom third offense, but Duda is entrenched in the three-spot and will get a full complement of at-bats, having vanquished any lingering ideas about using him in a platoon role. The counting stats will come.

The right play here is a hold if you already own Duda, with a mild buy recommendation if his current owner is willing to sell at a discount on account of his subpar production to date.

You need to be logged in to comment. Login or Subscribe
huztlers
I know it was consensus, but 25 HR expectations were odd coming into the season. He has only surpassed 15 HR once. I don't know what Duda is or isn't but nobody else should claim to either. He is a non-prospect, middle-of-the-order slugger, without intermittent power and occasional huge platoon-splits.
Reply to huztlers
LlarryA
Another article showing a player (previously Moustakas) with both a marked increase in going to the opposite field and a much higher line drive rate. One of our local hitting mechanics writers want to chime in on whether the two are really linked?
Reply to LlarryA