I play in a lot of deep (16 to 20-team) leagues, and one of the most important things you can do in a deep league is find yourself some pitching bargains late to fill out the back end of your rotation with consistent league-average production. Confidence in the ability to pull off that feat allows you to invest more heavily in bats during the middle stages of a draft and gives you that much more of a built-in advantage in roster construction. It’s not an easy thing to do, though, and one of the keys to pulling it off involves hitting on a few would-be streamers early who end up providing multi-week or even full-season value. Likewise, diagnosing when to cut bait on those guys is of paramount importance.

In that spirit, here are three guys in this mold who’ve produced outsized return value early in the season, with a look at whether or not the gravy train’s likely to continue on down the track or not.

I jumped on the Happ bandwagon last summer after he raised an eyebrow in my quest for cheap rotation depth in the Dynasty Guru Experts League. He made a notable mechanical tweak last year to move his release point wider and shorter, and it resulted in better extension and notably more movement on his pitches. He unlocked about 1.5 mph of velocity and backed off his cutter a bit in favor of heaters and changeups in the second half of the season, nearly halving his walk rate in the process.

Fast-forward to this season, and he’s shown dramatic, continued improvement across the board. The walk rate has continued to fall, all the way down to sub-five percent territory, and he’s allowing the lowest volume of baserunners of his career. What’s perhaps most notable is that none of the usual indicators of improvement are flashing red: he’s not inducing more swings out of the zone, or misses, or grounders. And he hasn’t fundamentally altered his pitch selection of sequencing.

There is one thing he’s doing more of, though, and that’s throwing strikes. His first-pitch strike rate of 67.2 percent is a career best, some six percentage points higher than he mustered over the prior two seasons. And not only is he working the zone early, he’s working the zone better. Check out how his pitch distribution has migrated to the bottom of the zone so far this year: 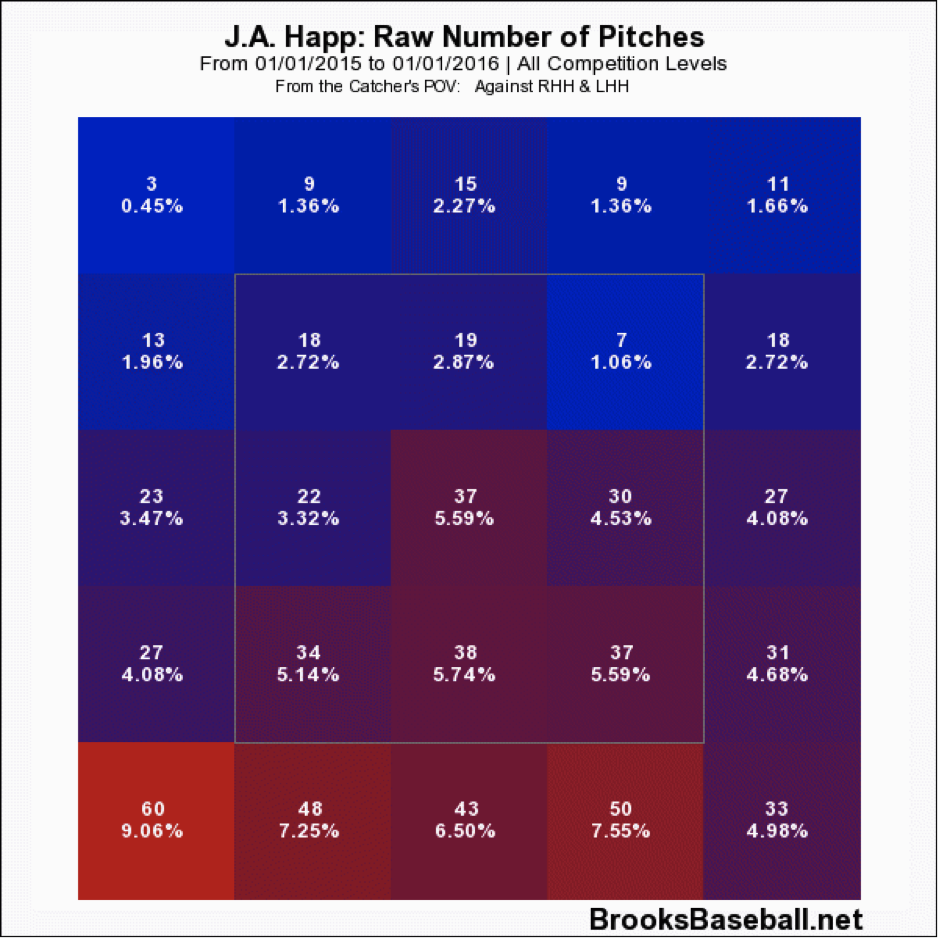 That plot is a start contrast to how he attacked the zone in his previous two seasons: 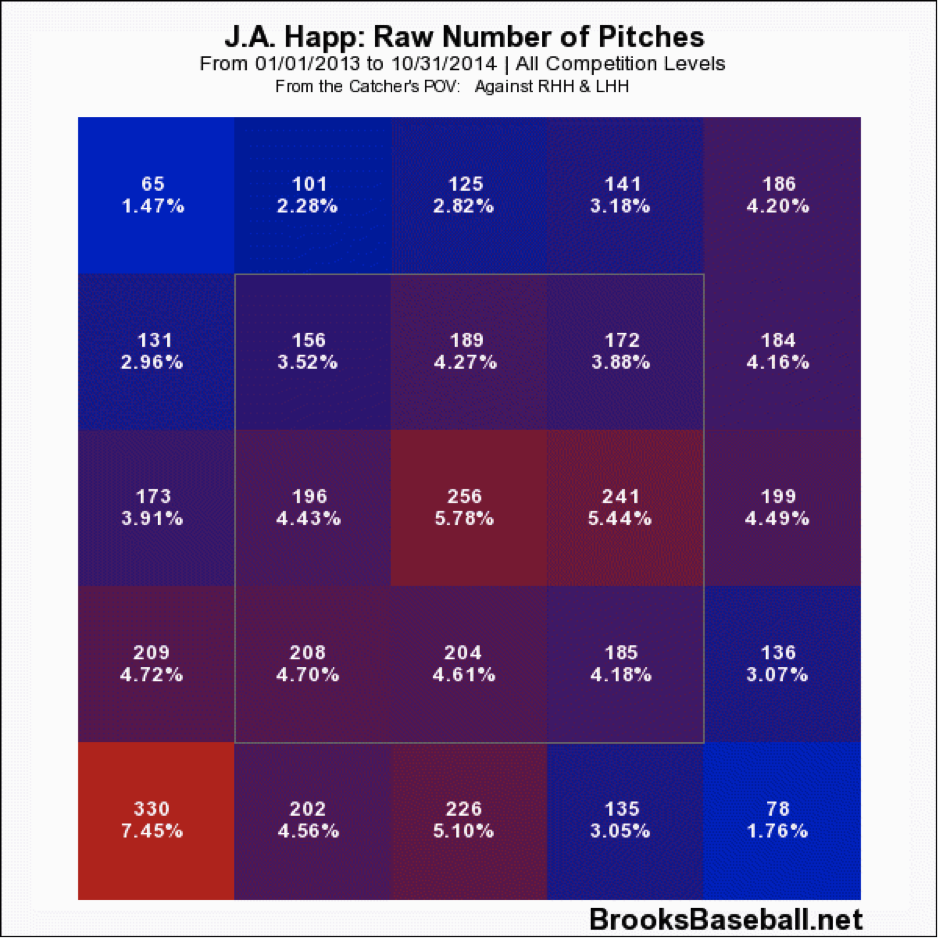 Happ’s migration to Seattle not only brought an opportunity to call a pitcher-friendly park home for the first time in his career, it also brought him to Mike Zunino. Zunino’s framing abilities graded out as among the best in baseball last year, and certainly by looking at those attack patterns it seems there’s a concerted effort afoot to work the bottom of the strike zone for all it's worth.

And so far so good, Happ currently checks in 34th among starting pitchers per ESPN’s Player Rater, and given his ADP of 122 that makes him one of the most profitable early season arms in the land. While he’s likely performed a bit over his head at the outset his his 97 cFIP tells the tale of the 51st-ranked starter in baseball, and given the success of his new approach, it doesn’t seem like that’s a particularly unreasonable valuation for him going forward.

The Baltimore southpaw generated outsized fantasy value last year on the back of a 16-win campaign, but has maintained top-50 value this season despite just one “W” in his first seven turns. Despite going off the board 89th among starters, he’s currently checking in 47th in returned value on the strength of strong ERA and WHIP contributions, along with an uptick in whiffs through the early going.

The bad news is, the basic peripherals suggest regression shall be forthcoming. He’s traded some extra walks for those whiffs, his homer rate has remained problematically high, and he’s been the beneficiary of a .222 BABIP that’s some 60 points below his career mark. His standard FIP sits a full two runs above his ERA, while his 104 cFIP projects slightly below-average production going forward.

There is some good news for his owners, as while the BABIP won’t be sustainable at quite that level he’s managed to earn at least a decent chunk of that fortune thus far. Chen’s arm slot has now wandered more than a foot south of where it was two years ago, and it’s helping him generate some additional movement. That hasn’t translated into a particularly more effective arsenal, however, and the early returns on swing patterns actually indicate batters are picking up his stuff a bit more cleanly this year. While the overall swing rate has remained constant hitters are chasing three percentage points less often (and swinging at that many more strikes).

What they’re not doing thus far, however, is hitting the ball with authority on the regular. Line drive rates against his three primary pitches (the four seam, slider, and split) are down precipitously across the board, and he’s giving up soft fly-ball contact at a dramatically higher rate, particularly to lefties. He’s doubling down on low-and-away to up-and-in sequencing against same-handed pitching, and he’s inducing a ton of weak contact with the new strategy.

For safety’s sake it’s certainly unwise to expect him to continue posting an ERA under three, but it’d also be foolish to write off the entirety of his early-season success based on a shorthand glance at his “lucky” BABIP rate. We’re ambling into stabilization territory for early season batted-ball data, and Chen’s production has been built at least in part on an evolution in approach. In 14-team and deeper mixed leagues, I’d be perfectly comfortable hanging onto him as a stable back-end option instead of shopping him on the cheap.

Phelps has really come out of nowhere in the early going, producing the 64th-most value among starters after going off the board 161st as the 600th overall pick approached in the deepest of mixed league drafts. The first thing that sticks out in Phelps’ stat line is that he’s yet to allow a single home run through his first 37 innings after yielding right around one in every nine innings pitched in his career. Opposing hitters have had no trouble squaring his pitches, as he’s allowed the fourth-highest line drive rate of anyone who’s tossed 30 innings so far. So naturally it should be expected that eventually some of that hard contact will get some air under it and land on the other side of an outfield fence or two.

There’s also the matter that his swinging-strike rate is barely half the league average for starting pitchers at just 4.9 percent. What’s interesting though is that despite the lack of whiffs he’s managed to maintain a strikeout rate that, while below average, is pretty close to that mean. He’s getting ahead in the count two out of every three times a batter fails to put a ball in play on the first pitch, and he’s working in the zone a full 50 percent of the time so far. His in-zone rate is top-ten among starters, nestled alongside the likes of Max Scherzer, Chris Archer, and Stephen Strasburg. The top of that leaderboard, in fact, is a virtual who’s who of guys who either bring elite gas, feature elite movement, or both. Phelps does neither of those things.

Whether it’s a sustainable recipe to fill up the zone with average stuff remains to be seen. His 100 cFIP suggests the very definition of a league-average starter moving forward, which is good enough for a top-60 projection. I’d hedge towards a more conservative valuation for fantasy purposes given the lack of strikeout potential. Of the three options we’ve discussed here he seems the least likely to continue returning consistent value.