I’m new here. When I began thinking about my first column, using Deserved Run Average (DRA) as a springboard was an obvious choice. I’d show some love to my new colleagues, highlight a complex and stimulating piece of research, and hopefully find something to explore that’s as curious as Jason Schmidt being sandwiched by peak Pedro performances as the top three seasons of the past 25 years.

I’m sure you have the DRA article memorized but it’s worth reminding you that the statistic is descriptive, not predictive. As Jonathan, Harry, and Dan stated in their piece, “DRA was created to evaluate past performance.” DRA isn’t a tool for forecasting future performance, but we can search for underlying reasons why a pitcher was able to achieve success (or failure) and judge the likelihood of those things being repeated.

There are plenty of interesting names atop the DRA leaderboard and my plan was to give some brief thoughts on several of them. Dallas Keuchel, Shelby Miller, Jesse Chavez, Jake Odorizzi, Aaron Harang, and Danny Salazar ranged from “okay as my SP3” to “is it 2016 yet?” on preseason rankings but all have been top ten pitchers according to DRA. I started digging in to Salazar first because he’s a fascinating player that has rewarded me, burned me, and rewarded me again in less than 200 major-league innings. What I found was enough for its own piece.

After an electric major-league debut in 2013, Salazar was an industry consensus sleeper entering 2014 (i.e., not a sleeper) despite a relatively short track record in the upper minors, command issues, and a fly-ball tendency accompanied by gopher-ball problems. His 2014 was a huge disappointment, as both components of his K:BB went in the wrong direction and he spent two months struggling in Triple-A. The stuff still flashed plus but inconsistency rendered him a risky option reserved for those willing to risk their ratios for the sake of strikeout upside.

Fantasy owners entered 2015 with guarded optimism, still dreaming on the raw stuff and a strong September, which included a complete game shutout of the playoff-bound Tigers and 37 strikeouts in 31.1 innings. Clouding his value was some confusion about Cleveland’s crowded pitching staff. Zach McAllister and T.J. House were both rotation candidates, the former because of a velocity spike and the latter because of a steady 102-inning sample in 2014, much of which coincided with Salazar’s stint in Columbus.

Indeed, both McAllister and House broke camp in the rotation at Salazar’s expense. Good on you if you used that opportunity to buy low. It only took a week-and-a-half for Cleveland to reinstall Salazar, and, barring a complete meltdown, he’s done commuting to Columbus. Through his first five starts, Salazar’s 37.2 percent strikeout rate is the highest in the majors among those who have pitched at least 30 innings. The next best is James Shields, who is nearly seven percent behind. Perhaps more importantly, Salazar’s 9.6 K:BB trails only Bartolo Colon (40-to-1!) and Michael Pineda.

The first obvious change is that Salazar added a curveball to his repertoire. Aside from simply being another pitch that batters need to look for, the biggest benefit of adding the hook is the velocity difference between it and his heater. Where his fastball and splitter previously had the biggest differential (roughly 10 mph), there is a 15-mph gap between the hard stuff and the curve and a five-mph difference between the splitter and the curve. It hasn’t show up in his home run rate yet—he’s given up five long balls in 33 innings—but the addition of the curveball should slow down opponents’ bats a little. Salazar is leaving the curve up far too often for batters to offer at it but when he throws it down and out of the zone, hitters are swinging through at a high rate, albeit in a small sample.

The other thing that jumps out is Salazar’s increased reliance on the splitter, mostly at the expense of his four-seam fastball. While the velocity on the fastball is a top-10 mark among starters, it has always been relatively flat and therefore hittable. Meanwhile, the splitter not only gets the most offerings of any splitter in baseball (67.24 percent swing rate) but also results in the most swings and misses (46.15 percent whiffs per swing). That swing rate and whiffs-per-swing rate would also rank as the best among changeups, the more prevalent offspeed pitch.

Exchanging some volume of a good-not-great pitch for an elite pitch sounds obvious but doesn’t necessarily work unless the sequencing is right, which leads me to the next point.

The curveball is still a distant third pitch to the fastball and splitter, but Salazar’s usage of it as the first pitch is nearly double the overall rate. As I mentioned before, he’s using new addition to his arsenal to slow batters down, especially at a point in the at-bat when they’re more likely to be sitting on a fastball. Even though three quarters of his curveballs have been thrown outside the zone, the game theory benefit of showing the pitch has some advantage. 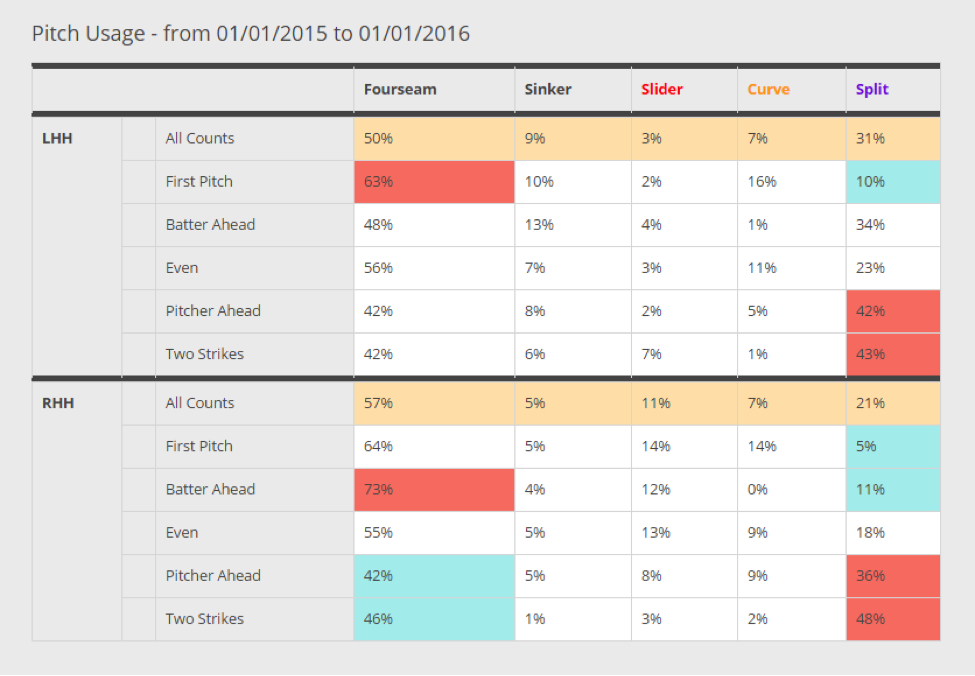 Salazar has only thrown three curveballs in two strike counts, so he’s not using it as a put-away pitch. What he is using to finish batters is that devastating splitter. He’s approaching 50 percent in two strike counts against righties and not too far behind against left handers. Let’s compare that to his 2013-14 usage: 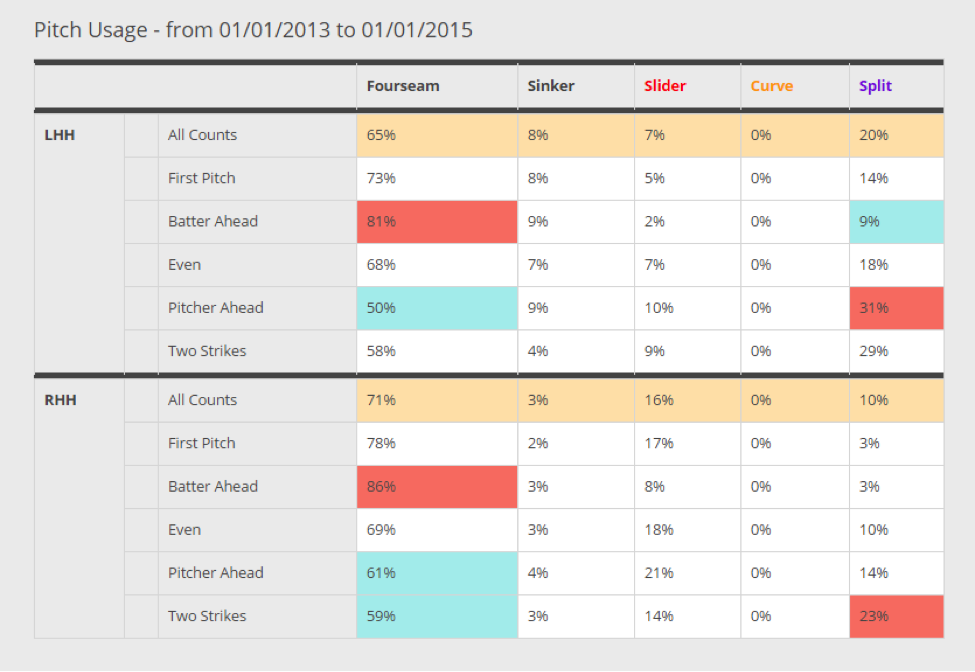 Salazar utilized the splitter pretty heavily when ahead in 2013-14, but nowhere near 2015’s rate. He was more reliant on reaching back and throwing that high-velocity fastball, which no doubt worked against inferior competition but isn’t a reliable way to sit down major leaguers. Against righties, he also leaned on a slider that has decent bite but doesn’t produce swing or whiff rates anywhere near the splitter’s. His slider has been prone to hard contact, as the line-drive and home-run rates off it are higher than any other offering.

As previously mentioned, Salazar has struggled with home runs throughout his career and this year is no different, despite some positive changes. Here’s his zone profile from 2013-14: 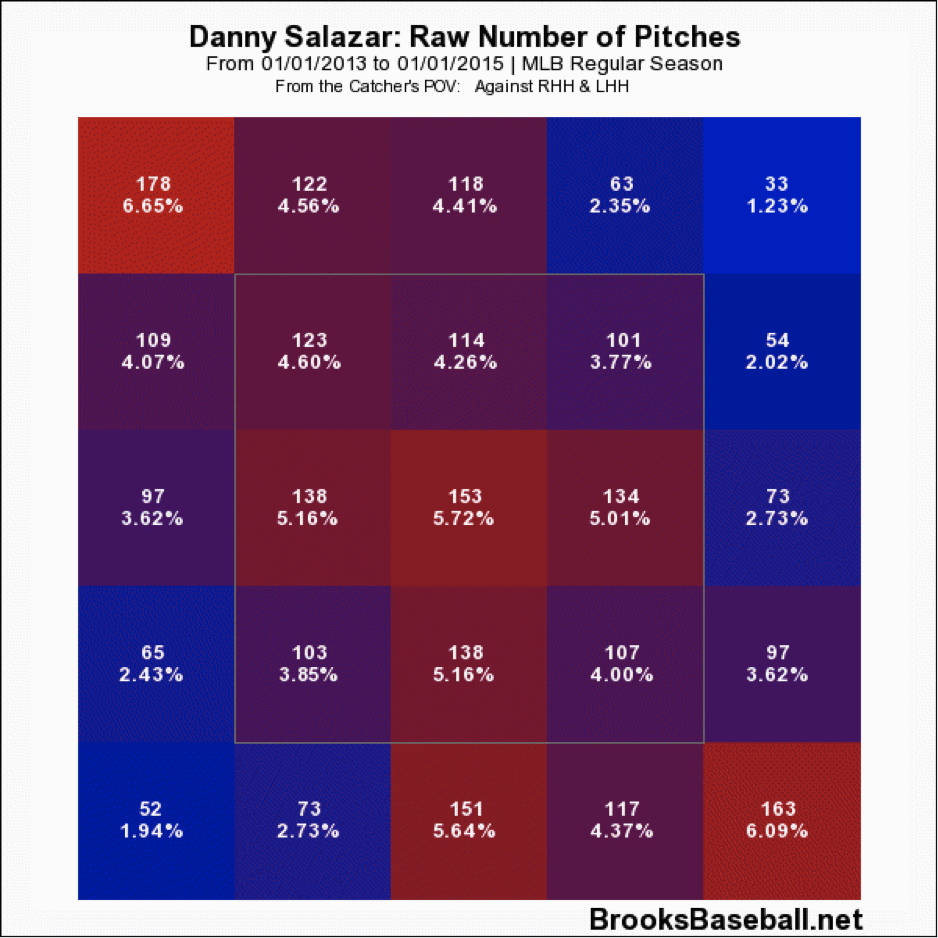 And here it is this season: 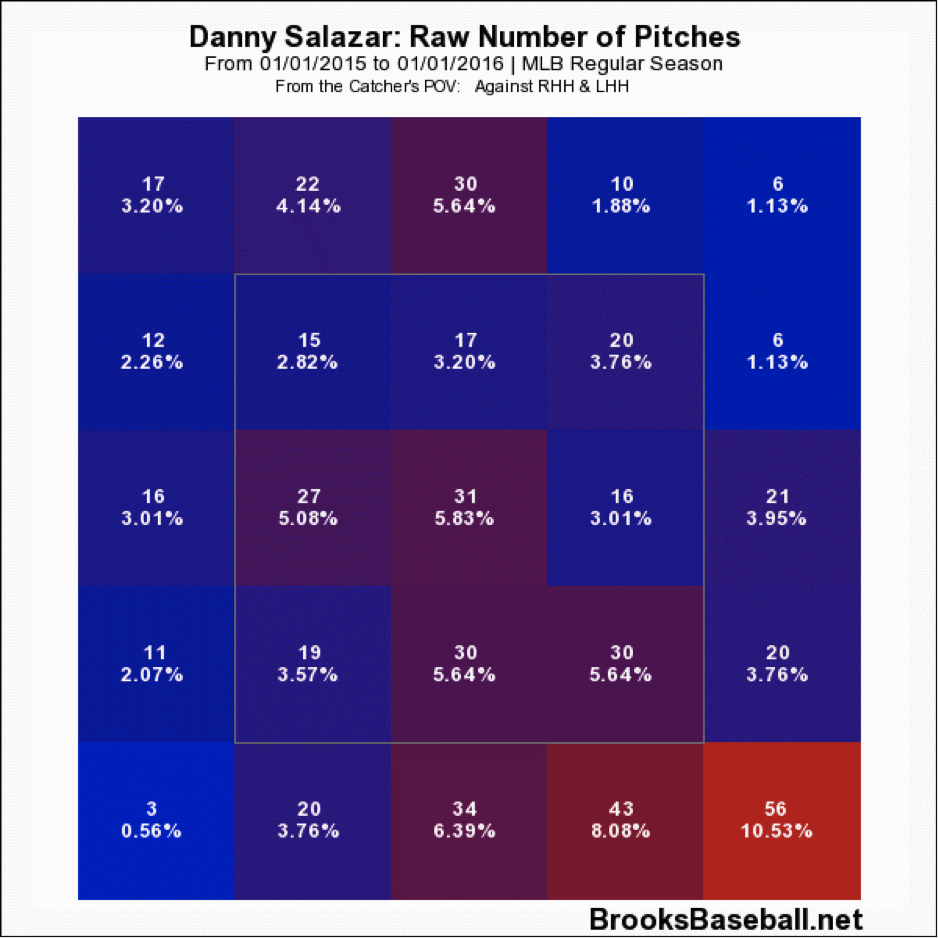 In case you can’t tell from the shading, Salazar is doing a much better job keeping the ball down. Where 37.92 percent of his pitches were elevated in 2013-14, only 29.16 percent have been this year. If you include the middle row, the percentages are 60.16 percent previously versus 50.04 percent in 2015. As a result, Salazar’s ground-ball rate has risen from 34.4 percent in each of the two previous seasons to 43.1 percent this time around. Unluckily, his current home-run rate is a career high but is being distorted by a 20 percent HR:FB rate that won’t hold.

To reiterate, Salazar’s lofty ranking on the DRA leaderboard is predictive of nothing, only evidence that what he has already accomplished was not a fluke. If you don’t like the case I laid out, have a look at his cFIP while you’re perusing the DRA statistics. It has more predictive power and fancies Salazar the best pitcher in baseball—something like David Robertson, except in six- or seven inning stretches.

We already know the strikeouts will come in bunches. PECOTA thinks a 3.00 ERA and a 1.10 WHIP are 80th– and 85th-percentile outcomes, respectively. I’m more optimistic than that given the changes to his pitch mix, his situational usage, and his pitch location. Try to use those home runs against to pry Salazar from his owner now. Another outing or two like his first five and he’ll be unavailable until next year’s draft.

You need to be logged in to comment. Login or Subscribe
ndparks
This is fantastic analysis - very helpful in understanding Salazar's abilities and improvement over time.
Reply to ndparks
Michael
Welcome, Greg. Terrific debut article.
Reply to Michael
bmmolter
Superb, easy to understand analysis of pitch usage and sequencing.
Reply to bmmolter
ChrisHopcroft
What a fan-bl**dy-tastic article. Welcome to the BP team and thank you!