In March 1999, Ted Williams opined that strikeouts were killing baseball. Modern behemoths were muscling up, trying to hit the long ball, trading more whiffs for more power. In fact, Williams thought the problem was so severe that Major League Baseball needed to deaden the baseball or increase the height of the outfield fences to discourage hitters from selling out for power.

[Side note: Selling Out For Power would be a tremendous band name.]

The Hall of Famer even offered an off-the-cuff solution of docking a player’s batting average a half-point for each strikeout. Although the practical result of such a practice would be the further de-emphasizing of the batting-average statistic, rather than a substantive change in behavior, it’s still an interesting idea. Just for fun: Baltimore Orioles first baseman (slash third baseman) Chris Davis would’ve hit .110 in 2014 under Mr. Williams’ suggestion. Right-handed pitcher Will White, who played with the Cincinnati Reds in 1879, would’ve hit .108 over 300 plate appearances. Mark Reynolds would’ve hit .093 in 2010.

I always found that article on Ted Williams interesting because he insinuates that players are being hard-headed and foolish for willfully striking out more, giving up opportunities to advance runners and improve their batting average. All this from a player who was reportedly too prideful and too stubborn to alter his approach at the plate once teams started employing a radical defensive shift. 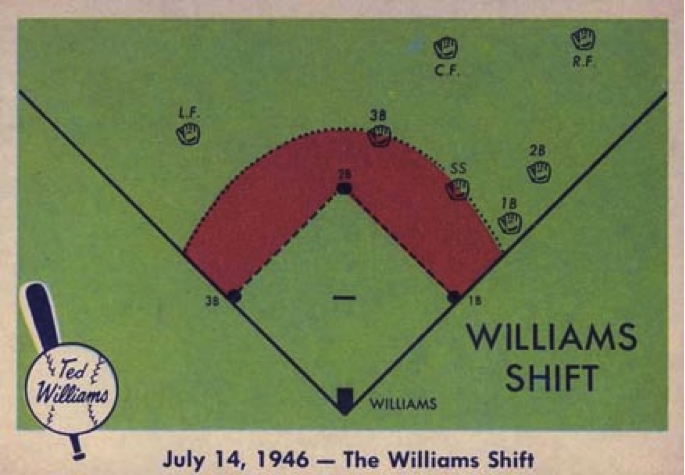 Virgil Trucks said that he never saw Williams hit the ball to the left side of second base. Not once. The myth is that he hit the baseball so hard with so much topspin that he still hit .400 in 1952 and 1953 with teams shifting against him.

It’s interesting to think of Ted Williams as a stubborn pull-hitter who continuously beat baseballs into the shift. He’s a career .344/.482/.634 hitter with a 20.6 percent walk rate and only a 7.2 percent strikeout rate. He’s perhaps the best hitter in the history of baseball and we’d maybe be talking about even better numbers if he had hit around the Williams Shift on occasion.

It seems to be an accepted baseball truism that the more pull-conscious a hitter is at the plate, the more prone he is to the strikeout. This could be because the hitter steps into the proverbial bucket and pulls off the baseball, or it could be because he constantly guesses and attempts to cheat on the fastball, resulting in silly swings against offspeed pitches.

Though not known as a huge strikeout hitter, Brian Dozier has recently been seen as a prime candidate for defensive shifts due to his propensity to pull the baseball on the ground. He pulled the baseball 53.8 percent of the time in 2014—the league average was 40.2 percent—yet only struck out in 18.2 percent of his plate appearances. Even his swinging-strike rate was only 5.9 percent a year ago. Those numbers buck the assumed trend.

What Dozier did have last year, though, was a higher-than-average infield-fly rate, and he owns a career .241 batting average. Those are two unsurprising numbers for someone who has proven to be pull-conscious over his career.

This season, the 27-year-old has a very familiar .244/.328/.420 slash line and a 10.2 percent walk rate; however, fantasy owners want to know where the power is. For a guy with 23 home runs a year ago, owners are panicking a bit that he only has four in early 2015. PECOTA only projects 13 homers through the end of the season, too, so questions about his power outage certainly appear to be somewhat valid.

I want to suggest that Dozier has become too pull-conscious, which has negatively affected his overall production and underlying numbers. Coming into Sunday’s games, only Colby Rasmus (62.8 percent) had a higher pull percentage than Dozier (61.5 percent). Those are well above the league average of 39.3 percent this year.

To a greater extent than Rasmus, though, Dozier has become pull-happy. No qualified hitter in Major League Baseball has hit the baseball to the opposite field less often.

Dozier has never been one to utilize the opposite field with regularity, but this is extreme even for the second baseman. His career norm is 20.5 percent and his number this year is over a 50-percent reduction from the 2014 campaign.

An extremely pull-conscious approach is not necessarily a negative if teams aren’t employing a defensive shift. Furthermore, pulling the baseball and not shooting the baseball to right field is not a guarantee of failure, by any stretch. My concern is that Dozier is pulling like never before and his contact numbers have decreased dramatically.

Prior to 2015, Brian Dozier’s contact rate had been remarkably consistent throughout his brief career. It has taken a significant nosedive and coincides with a dramatic change in his batted-ball profile. I know correlation does not equal causation, but the pairing seems to signify something has altered in his approach or his swing—something not necessarily desirable.

It must be said, one can look at his .195 ISO and remark that it’s the highest of his career—minors or majors—and that his 29.5 percent line-drive rate further suggests Dozier is actually hitting the baseball hard, he just hasn’t reaped the rewards as of yet.

While those numbers are encouraging, line-drive numbers can be fickle. Instead, it’s perhaps better to look at his mediocre 89.41 mph average batted-ball velocity, or the fact that he ranks 107th in average batted-ball distance. Neither are in the top half of qualified hitters in the league. But, it should absolutely be noted that his ISO and line-drive numbers suggest his low home run total is actually misleading. Given the other batted-ball data, though, it’s tough to make any firm conclusions in that realm.

Much like Ted Williams, Brian Dozier isn’t changing his approach at the plate, despite the defensive infield shift that’s beginning to be used against him more often. In fact, he’s pulling the baseball even more. I’m worried that his swinging-strike rate has increased 3.6 percent from 2014 to 2015 and his contact rate has overall decreased by over seven percent. Adding that all together, I’m concerned his batting average will drop from its already-low .244. He’d have to be pretty special in other categories to make up for that bad of an average.

Although the majority of this article highlighted the concerns around Dozier’s increasingly pull-happy approach, it’s not time to bail on the second baseman. The power numbers haven’t been there, yet he’s still the seventh-ranked fantasy player at the position. He’s a tremendous source of runs and should run more than he has in his first 31 games. The batting average may drop and the power may not match last year’s numbers, but he’s still a chance to be a 15/15 guy with ample runs scored. At a largely barren middle-infield position, that’s still quite valuable, even if he hits .215 or .220 the rest of the season.

You need to be logged in to comment. Login or Subscribe
huztlers
15 HR/15 SB/.230 AVG is quite valuable - yuck. I have to think that many players could produce this line if given the opportunity, but that is not the way it works out. Perhaps old Ted was correct regarding the current state of the game. Ks and all.
Reply to huztlers
BarryR
I'm having trouble with the premise of this article. He's got the same BA as the last two years and he's on pace to hit 20 HR. Since he's also on pace to hit 50 doubles, there seems to be nothing wrong with his hitting at all, with logic telling me that some of those extra doubles (his career high is 33) will turn into HR. For fantasy purposes, he's also on pace for career highs in runs (125) and RBI (80).
Now if you want to downgrade him for something for fantasy purposes, it's in his speed. He stole 14 of 21 two years ago and 21 of 28 last year, He's only attempted 2 thus far this year, which could be indicative of a tighter leash on him. Given that he only stole 6 bases after July 1st last year, this could be a skill he is losing.
Reply to BarryR
jimmyb1799
The premise of the article is that since he's pulling the ball more than normal and his contact rate is down significantly, maybe we shouldn't expect his batting average to remain around his career norms. And perhaps his power shouldn't be expected to continue at the same rate with this approach because he's not hitting the baseball as hard as in years past.
Reply to jimmyb1799
BarryR
I can't dispute the premise with the author :)
I was just misled by this: "fantasy owners want to know where the power is. For a guy with 23 home runs a year ago, owners are panicking a bit that he only has four in early 2015"
I'm not an owner, but I just don't see why his current HR total would induce panic.
Reply to BarryR
bhalpern
The quoted slash line is from after the game on 5/9 in which he had just hit his 3rd HR. The 4th HR came yesterday. Those two HR's have changed his pace for 162 games from 11 to 21.

Reply to bhalpern
majnun
So it's early? :-)
Reply to majnun