Fantasy baseball owners are hardwired to pursue value. It’s not always about grabbing the best player at a given position, but rather identifying several players who are undervalued by the community and spending less to acquire more. That way, the banked money can be utilized in other areas to create the best possible squad.

When acquiring high-end players, value isn’t always paramount. In auctions, if you’re unwilling to spend the extra $5-10 on an elite player, you’ll be stuck with extra money in the end and a roster devoid of impact talent. Similarly, in snake drafts, the first couple of rounds are more about acquiring “safe” production among the elite, rather than absolute talent—which is why someone like Troy Tulowitzki is a back-end option in the first round, when his talent is clearly top five.

This particular article highlights one of the better value buys in this year’s fantasy campaign, at least among position players. In early November, the Toronto Blue Jays traded first baseman Adam Lind to the Milwaukee Brewers in exchange for Marco Estrada. The Brewers desperately needed an upgrade—their first basemen compiled a putrid .210/.275/.365 over the past two years—and may have additionally acquired a small piece of fantasy gold.

Thanks to George S. from parts unknown for emailing me about Adam Lind and asking me to delve into his fantasy prospects for 2015. If you have a particular player you’d like to see profiled in this space, drop a line in the comments, tweet me (@JP_Breen) or shoot me an email. The goal is to make this weekly column useful for BP readers, so please don’t hesitate to recommend a player.

Anyway, let’s dive into the nitty gritty. Let’s do this.

Of course, if healthy is crucial to this discussion.

In three of the past four seasons, Lind has spent time in the disabled list due to a back injury. His back remains an issue this spring, as he missed some time early in camp with back spasms. He admitted that his back projects to remain an issue for the foreseeable future; however, he’s hoping to stay ahead of the problem with the help of the Brewers’ medical staff.

One should reasonably assume that Lind will miss a half month this year with a back injury. Fortunately, though, because Lind is ranked the 30th-overall first baseman and is being drafted as the 25th overall at the position. To bring quality value from such a low ADP, he doesn’t have to provide 600 plate appearances. After all, Brandon Moss hasn’t reached that plateau and still offers considerable value for fantasy owners. If Lind can be above average for 450-plus plate appearances, it seems likely that Lind will outperform his draft position—and considering there’s some playing-time upside in that projection, that’s comforting.

All of this has been a little simplistic, though. Lind is moving from Toronto to Milwaukee, which will certainly affect his performance. It should also prove useful to compare Lind’s performance to someone being drafted well before him in most drafts.

The Rogers Centre is hardly a pitcher’s paradise. Fortunately for the Brewers and Lind, Miller Park shouldn’t affect his offense negatively. Rogers Centre had a 109 and 104 home run and run factor for lefties last year, respectively. Miller Park conversely had factors of 123 and 106 for home runs and runs a year ago—which certainly makes sense, given the extreme short porch in right field. Lind may very well enjoy a better hitting environment than the one he left.

One may rightly wonder if the majority of Lind’s homers come to right field, in order to take advantage of the ballpark advantage. Last year, he certainly did not. His home runs exclusively came to the opposite field and to center. 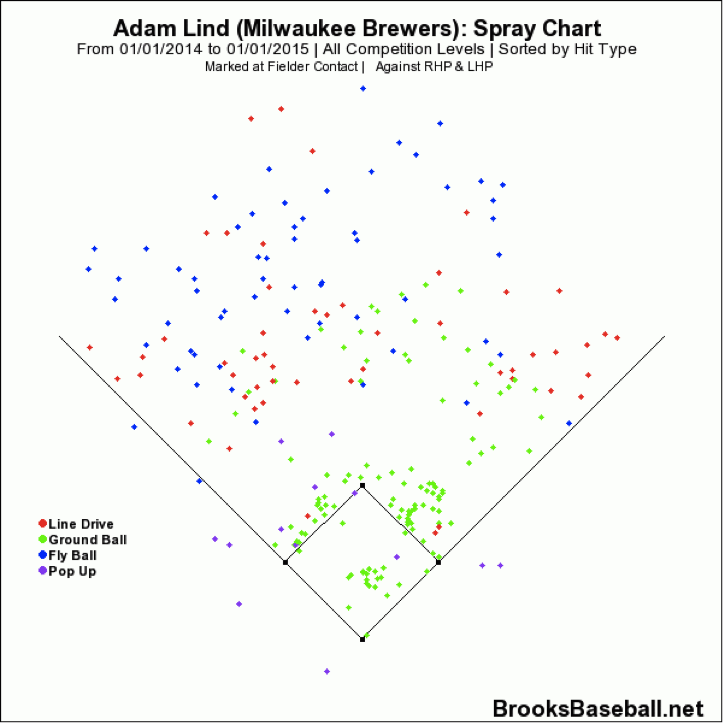 If one looks back a year further, though, when he accumulated more than 500 plate appearances, it becomes quite evident that Adam Lind displayed plenty of power to his pull side, which would be naturally augmented by his newly hospitable confines in Milwaukee. 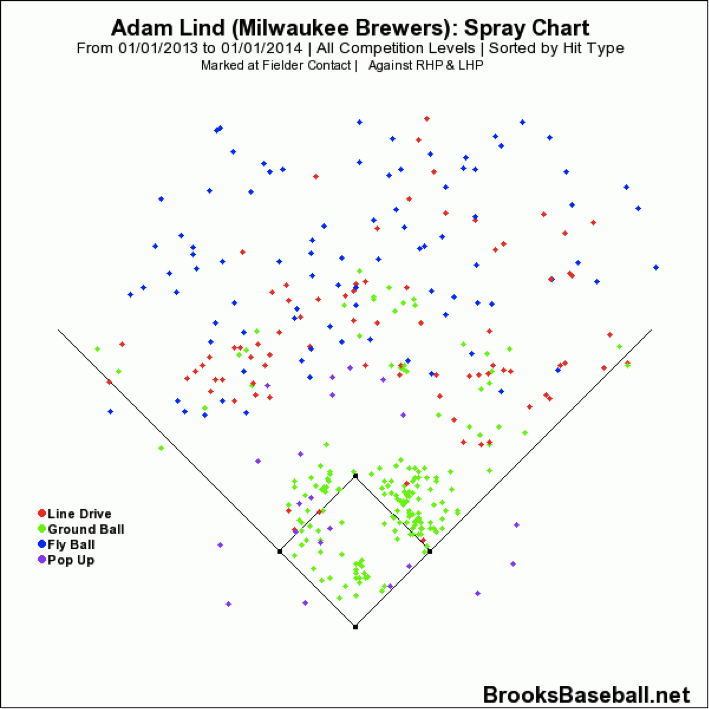 Lind clearly utilized the whole field in 2013, but many of his deeper shots came to right field. The same can be said of previous seasons, as well. It would be a mistake to consider Lind as a non-pull hitter simply because of his spray chart a year ago. The veteran first baseman has a history of caroming baseballs from foul pole to foul pole. Miller Park should only help.

In terms of comparing Lind to a first baseman that is higher up the food chain, so to speak, I believe that Lucas Duda is a useful comparison. Why? Both first baseman are essentially platoon options at the position, who feast on right-handed pitching and had comparable seasons in 2013 and 2014. Moreover, Duda is currently being drafted 146th overall, while Lind is only going 284th. Similar value with roughly 140 spots different is money on draft day.

Neither hitter can handle lefties. Duda hit .180/.264/.252 against lefties last year in his banner year, and it’s been well-established that Lind cannot handle southpaws. His career slash line is just .212/.257/.331 against them. It’s why the Blue Jays have consistently shielded him from facing same-handed pitching over the past half decade.

It does appear that Lind is more of a well rounded hitter against righties than Duda, though.

By this data, one can clearly determine where Duda does his damage. It’s against righties and almost exclusively against fastballs. Lind, on the other hand, seems to handle righties across the board. He cannot be exploited by a single pitch type. That should bode well for his batting average, as well as his power potential in Milwaukee.

It should be noted that Lind will reportedly see time against lefties to begin the year, or until he proves that he cannot handle it. What that really means is the Brewers do not have a suitable platoon partner, though they have begun playing Gerardo Parra at first base to have additional options. That is something that could help his counting stats, but prove detrimental to his batting average.

All in all, though, it appears clear that Lind and Duda profile as much of the same player, but Lind is going much later in drafts. Surely, injury concerns has something to do with that; however, it doesn’t seem reasonable that a back injury for 20ish games per year should penalize him 140 draft spots. If he does accumulate 500-plus plate appearances, though, the potential value gain is immense. He could be a top-15 fantasy first baseman without the price tag.

Lind is one of my favorite sleeper picks this spring because he’s completely off the fantasy radar. Some sleepers see their value inflate because everyone wants to be the one to capitalize on the “hidden” value that’s no longer obscured. Lind could easily offer 25 homers plus a .275 average this season, if his back doesn’t become too much of an issue. He’ll also benefit from a potentially potent Brewers lineup, now that Ryan Braun is reportedly healthy. The veteran should mash righties to his heart’s content in Miller Park. Fantasy owners just hope it will happen for more than 500 plate appearances, because therein lies the fantasy treasure.

You need to be logged in to comment. Login or Subscribe
floydwicker
Saw him yesterday against the A's who had Three infielders on the right side of 2B (from batters POV). Looks like they've seen his GB scatter chart!
Reply to floydwicker
brucegilsen
Parra playing 1B can't be about spelling Lind against lefties, if that's what's being implied. Parra is also a left handed batter with huge platoon splits.
Reply to brucegilsen