Taken with the fourth-overall pick in 2005, Ryan Zimmerman was one of the fastest risers in recent history. The University of Virginia product was called up to the big-league club that same September, and was an everyday member of the lineup the very next season. From there, he became one of the better third basemen in the game, winning a couple of Silver Sluggers and a Gold Glove, and earning MVP votes in three seasons. His defensive skills have faded as the years have gone by, but his bat remains productive.

When he was on the field, Zimmerman remained a strong offensive player, finishing the year with a .295 TAv and a 117 OPS+. One of the biggest keys to his .280/.342/.449 line was cutting his strikeouts down from the 21 percent mark he set in 2013 to 15 percent. He did this while keeping his walk-rate steady at an above-average 9.2 percent. His discipline stats improved across the board. Zimmerman cut his whiff rate down by almost five percent, stopped swinging at pitches out of the zone and was saving his contact for pitches in the zone. This all came in a limited 61-game sample, but it goes to show that his bat is still there even if other parts of his game are slipping.

Nothing went more wrong than Zimmerman’s health last year. Though he’s always been something of an injury risk, 2014 was the first year in which he played in less than 100 games. The now-30-year-old missed extended time with two separate injuries. The first was a fractured thumb he suffered in April diving back into the base. After returning from that ailment in early June, Zimmerman hit the disabled list once again in mid-July with a strained hamstring, an injury that held him out until late September. Even when he was on the field, he watched his power drop to levels he’s rarely played at. He finished the year with a .168 ISO, the third-worst mark of his career and 22 points below his career average. The problem was his inability to punish pitches on the inner-half of the plate. Obviously, there are some sample size issues here, but the following zone charts illustrate the problem. 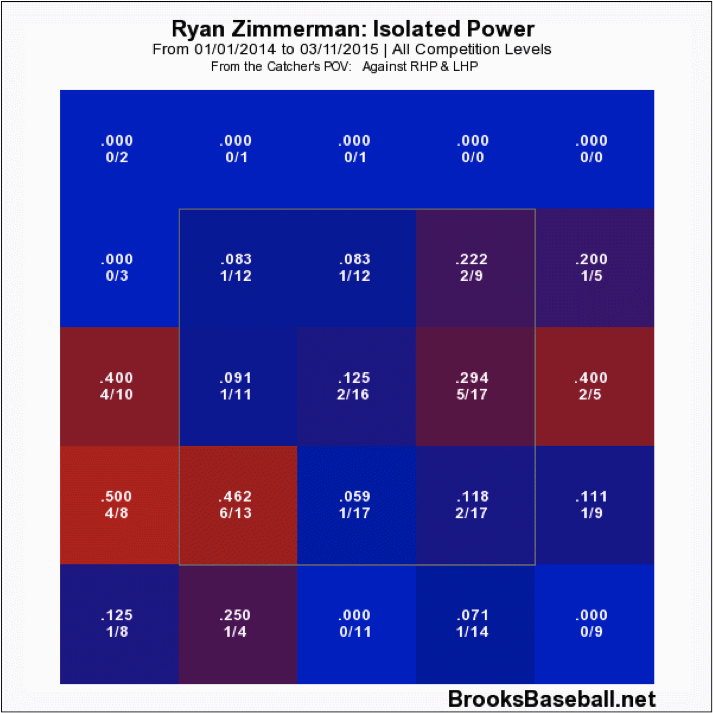 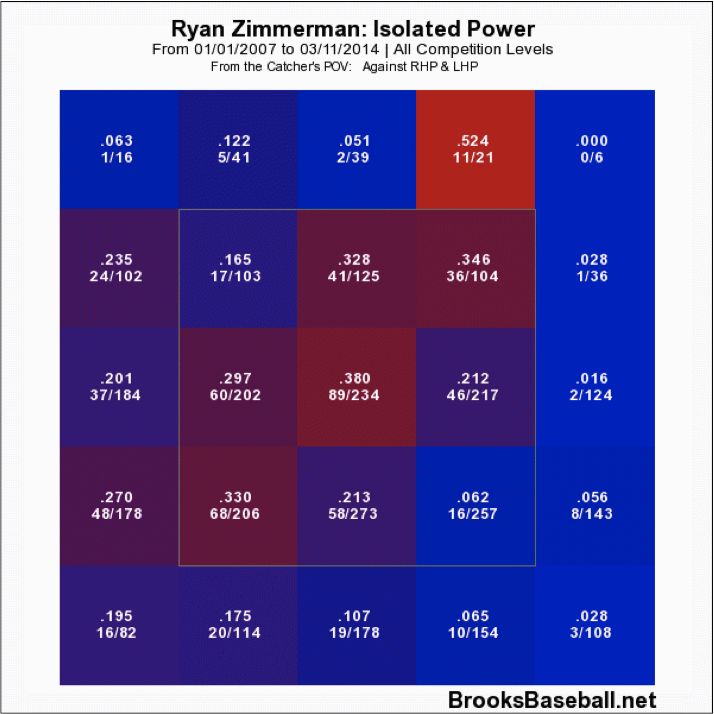 He still mashed a good number of doubles last season, but if he wants to get back to his previous power levels, he’s going to need to turn some of those inside pitches into homers.

This is, of course, largely dependent on health, but Zimmerman should remain a productive fantasy player in 2015. Early reports out of spring training have been positive, and he’ll be moving to a less demanding position across the diamond this season. Fortunately for those in redraft leagues, the move won’t affect his eligibility for 2015. The big question will be whether or not he can get his power back this season, and I think he should. Last season was something of a lost season, and was heavily affected by a thumb injury that will always be a hindrance to someone’s power stroke. He’s always going to be a strong AVG play, and the Washington lineup should provide good contextual stats. He’s not going to offer a ton of SBs, but not many corner infielders are. As a low-cost option at the hot corner, he’s a relatively safe bet for a .280 AVG, with strong runs and RBI totals, and he has a decent chance at 20-plus homers again with good health.

Zimmerman is going to be a part of Washington’s lineup for the foreseeable future unless his bat unexpectedly falls off a cliff. He signed a six-year extension back in 2012 that will keep him with the Nationals through 2019 and gives him a full no-trade clause. Unfortunately for fantasy owners, his move to first base is going to be a double-edged sword. On the one hand, he’ll be at a less demanding position, meaning he should be on the field more often. However, he’ll lose his third base eligibility at some point soon, and his value will quickly drop. Though it seems like he’s been around forever, he’s only entering his age-30 season, so there are productive years left in that bat. He’s a good target in redraft leagues, but for dynasty and keeper leagues, I’d look to move him before he loses a chunk of his value as a first baseman.