In case you missed it, J.P. and Nick got our “Five to Watch” series started this week with looks at NL Post-Prospects and AL Hitters. Today we turn our attention back to the bump, and in a surprising turn it actually proved tougher sledding last year to find top-tier pitching talent in the senior circuit. Twenty NL pitchers returned at least $20 of NL-only value last season, with 37 topping the $15 mark. That stacked up a little light against the AL, where 24 hit the $20 threshold and 46 topped $15. So in the interest of helping you navigate these choppier-than-expected waters, here are five NL starters who, for one reason or another, fan the flames of my heart as interesting hurlers to keep an eye on.

I find Ryu to be one of the most interesting pitchers in fantasy baseball heading into 2015 because I think both the risk and the reward he carries are significantly greater than we might assume. Ryu has, perhaps more quietly than any other pitcher, been absolutely outstanding over the past two seasons. Since his 2013 debut his FIP is the 10th-best mark among all qualified starters, and last year he raised his whiff rate by over a strikeout an inning last year, cut his walk rate by a quarter to the 13th-best mark in baseball, and developed both his curve and slider into legitimate breaking balls.

What’s more, Ryu’s effectiveness appears to stem from a solid, across-the-board skillset. He boasts a solid, above-average four pitch mix, and he’s able to command all four with the help of a bit of deception. Check out Ryu’s release-point plot since his debut: 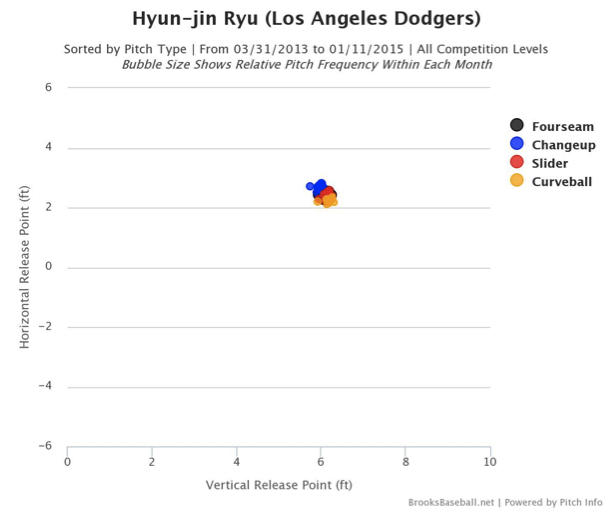 Not much hand-tipping there as to what’s coming. So we’re looking at a (still young) starter who improved significantly on a very strong rookie season to basically solidify himself as one of the ten best pitchers in baseball, statistically speaking anyway.

And yet on the flipside, he’s a scary injury risk in light of how last season unfolded and this spring has begun. After missing time early in the year with shoulder inflammation, Ryu pulled his gluteus muscle in August and missed more time. In the heat of a pennant race, the Dodgers bought him back pretty quickly, but the shoulder wasn’t quite up to the task.

Fast-forward to spring training, and Ryu has again been sidelined by a sore back. He’s not a threat to miss time just yet, but the risk here is that the same kind of causal relationship between his mid-section and shoulder pops up again. For a pitcher who depends on consistent mechanics and has a demonstrated recent history of shoulder issues there are significant red flags any time issues with the core come to light. The injury risk shouldn’t be downplayed here. At the same time, he’s ready-made for gamblin’ managers on account of his under-the-radar elite upside if he does stay on the mound. Given where he’s currently going in drafts (152nd overall, 33rd among starters) he’ll be a tremendous bargain if—if—the shoulder holds.

Hey look, it’s another lefty who gets lost in the shuffle of his own rotation, made impressive and demonstrable improvements when he was on the field last year, but missed time with shoulder issues last year! We’ve got ourselves a legitimate theme here. As noted, Gonzalez is an interesting case for many of the same reasons as Ryu, but his situation is slightly different. Gio missed chunks of May and June with inflammation in his throwing shoulder, but he came back to throw 108 more regular-season innings without issue.

Those 108 innings looked a good bit different than his previous profile, however. He lost about 1.5 mph off his fastball after returning, and yet he harnessed it more effectively than he has for any such stretch in his career. His walk rate dropped to a more manageable three-per-nine, and he gave up almost a full hit less on a per-nine basis than his already-stellar career mark.

The most interesting development was with his change-up. He started throwing it much more often, which kind of makes sense when you check out how much better he’s gotten at getting hitters to swing through it over the last few seasons: 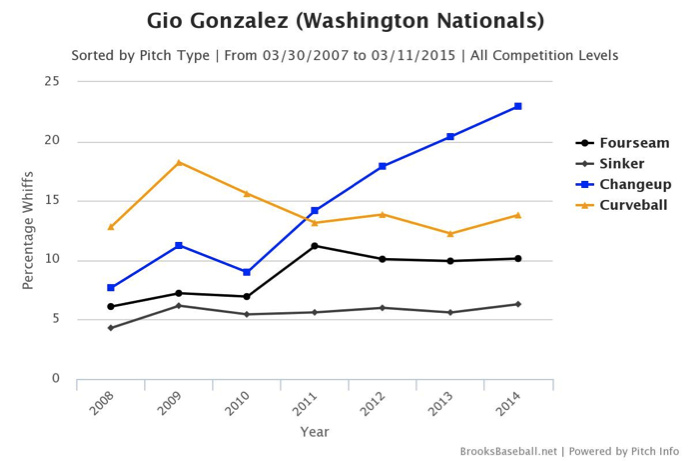 He’s now gone two consecutive seasons posting positive PITCHf/x values with three different pitches, with dramatic improvement in the value of his change front and center in the trend. It gives cause for optimism, and if he enters the spring showing no ill health effects while continuing to deploy his change at more recent frequencies he’ll be a nice potential target for early-season acquisition if he’s not already in your stable.

Despite some assorted ups, downs, and general bumps in the road, Wheeler’s first full season was by and large in line with optimistic projections. His whiff totals checked in tenth among NL hurlers, while his FIP cracked the top 20. And the stuff was as-advertised. His 95.0-mph fastball was the third-fastest heater among NL starters, he threw his slider with 75-grade velocity, and his curve produced a solid-enough 14 percent whiff rate.

Yet the control profile remained well below-average last season. He managed to post a perfectly mediocre rate of in-zone pitches overall, but on the first pitch of at-bats his strike rate was the third-worst among all qualified starters. That led to a double-digit walk percentage that was the fifth-worst in the game, and all the good stuff that goes with it: longer at-bats, higher pitch counts, and shorter outings. Wheeler’s ability to take the kind of leap his stuff suggests he might just be able to take will depend entirely on whether his command of an outstanding and diverse arsenal improves.

Of particular important will be his ability to continue refining his secondaries against left-handed hitters. He walked them at an untenable 13% rate last season, but he was able to find some better success in the second half last season by migrating to an approach geared more around his fastball and curveball, and it worked because he did a better job keeping the ball down in the zone. First pitch strike percentage and change-up effectiveness figure to be the two things to watch early in Wheeler’s season to see if the signs of continued improvement start to manifest, or whether he’s instead showing signs of stagnation with his control.

Nobody ever says nice things about Kyle Lohse in fantasy baseball circles, and I’m here today to tell you that’s not right. He’s currently going as the 75th starter off the board with an ADP of 288. Last year he returned $14 of value as the 44th-best starter. Do you know what else Kyle Lohse did last year? He did the exact same thing he’s done every… single… year for the past four. He posted a poor strikeout rate. He averaged less than 90 on his fastball. He earned a bunch of his value from posting double-digit Wins. He dramatically outperformed both his FIP and his FRA.

It’s not a remotely ideal fantasy profile because it’s typically not a remotely sustainable one. And yet, there are exceptions to every rule, and some guys just are who they are and they make it work. Until they aren’t and they don’t, anyway.

On the one hand, the relative safety Lohse has proven himself capable of delivering time and time again for the back of fantasy rotation is terribly underrated every draft season. Old guys who don’t get strikeouts are always undervalued, and he’s the crown prince of the archetype. On the other hand, there was a troubling sign under the hood for Lohse last year that was enough to give pause. His vaunted sinker, a pitch that as recently as 2012 he’d relied on with over half his deliveries, continued an increasingly ugly trend of not sinking: 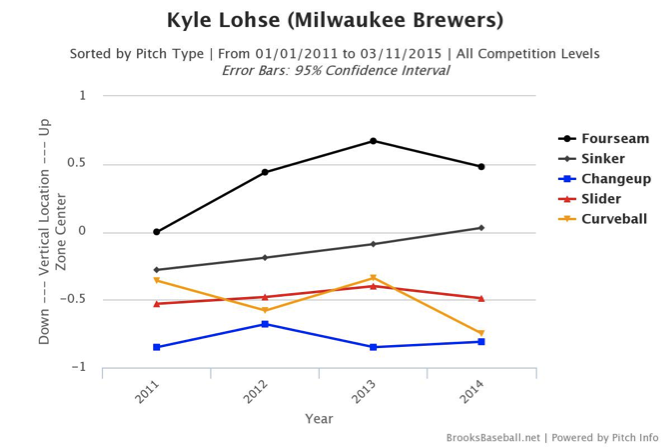 To Lohse’s credit, he’s been proactive in addressing his failing fastball by dramatically increasing his slider usage and diversifying his arsenal over the past couple seasons, and so far so good. But the non-sinking sinker bottomed out as a pitch worth 11 less runs-per-hundred than an average sinker last year, and there’s only so long a guy with that bad a fastball can survive. Sinker usage and location will be telling components of Lohse’s early performance. If he can’t get it down and doesn’t show the confidence to throw it he may finally be in for a longer summer than he’s been accustomed to seeing recently.

I don’t really want to talk about Liriano, to be honest with you. We have a long and sordid history together, he and I. And I don’t typically care for pitchers who demonstrate an open hostility towards throwing the ball over the plate. But remember what I said about some guys just being who they are? Well, Liriano is one of those guys, and he’s in a situation in Pittsburgh that’s just perfect for taking advantage of the strengths he has while limiting the vulnerabilities of his weaknesses.

For all of Liriano’s control flaws, his brand of wildness is the arguably the most effective kind in baseball. Last season’s 35 percent in-zone rate was easily the worst among all starting pitchers. In 2013 he was second-worst. In 2012? Also second-worst. You get the idea. But in those same three seasons he also posted the best, second-best, and best again O-contact rates.

Since arriving in Pittsburgh Liriano’s pitch selection against righties has been a primary driver of success. Check out the migration of his arsenal against right-handed hitters since 2012: 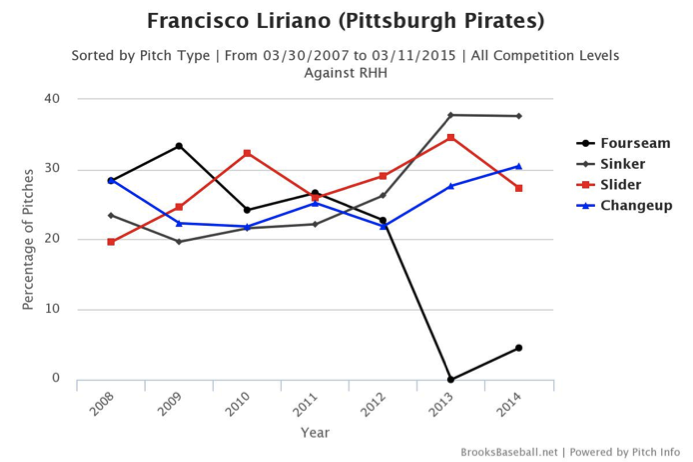 Sinkers and, suddenly, a whole bunch of changeups. He’s continued to hit the zone with his change at just about the same rate as before, but where hitters were chasing the pitch about a third of the time when he arrived under Ray Searage’s wing he’s now generating fishing expeditions almost half the time he throws the pitch to a right-hander.

The development helped Liriano post a reverse split for the first time in his career last season, as right-handers hit just a collective .202/.306/.317 against him. It’s a notable evolution, and it bodes well for Liriano across the next three seasons if his recent gains with the pitch look like they’ll hold through the spring.

In that time, in my NL-only, I've picked him in reserve rounds, then ridden him until I thought the clock struck midnight, only to find other owners wanted no part of the pumpkin. The next year he made it into the draft, but not for much. No one ever believes in him, it's true. How does he do it? Who cares. All that matters is that his WHIP always delivers.
Reply to Robotey
markpadden
It's true. No one likes to talk about it, but there are a handful of 30+ year old vets who have consistently outperformed peripheral (and this projections). See: Young, Chris. It's time to quantify it and factor it into intelligent projection algorithms.
Reply to markpadden