As players get injured and as auctions, drafts, and keeper deadlines approach, this tends to be a busy trade time for many a keeper league. We have talked about framing team needs, looking for trade partners, and honing negotiation tactics, but today we are going to look at how we can optimally structure our trade offers. Why? Because the way we engage in trade talk and the way we structure our trade offers impact how successful we are at (i) making trades and (ii) getting the most out of trades. What follows is a slide from behavioral economics class on choice:

Because we are not in the world of traditional economic theory, because we are out in the real world playing a game on the internet, we can, per the slide, “influence preferences and choices” in how we design the choices we provide to others. The buzz word for this is “choice architecture.” We are going to take a look at some of the phenomenon that affect our (and our leaguemates’) decision making and see if there are ways we can use it to our advantage. More specifically, we will take a look at the (i) tyranny of choice, (ii) decoy effect and compromise effect.

Getting to “productive trade talk” is something often assumed and overlooked, but it can be a major hurdle in completing beneficial trades. Both the owner sending the random Justin Verlander for your Jose Bautista and the owner that puts their entire team on the trade block fail to consistently find productive trade talk. They do so because they respectively underwhelm and overwhelm us with choice. The former is why many shudder at having to go to a restaurant with a prix fixe menu, while the latter is why those same people need “just a few more minutes, please” when deciding between the 419 options at The Cheesecake Factory. Put differently, too little choice is a downer, while too much choice paralyzes us.

Fantasy Baseball Takeaway: Take a look at the needs of your leaguemates (particularly their needs as they perceive them), and start with some options. These options can be player specific or more general such as “one of my relievers for one of your outfielders.” If you find this to be too general, you can use the “any interest in” or “how about a trade centered on” any of these specific players for any of your leaguemate’s specific players. I apologize as many of you do not need this advice, but if you notice you are not getting anywhere with your offers, you might want to take a look at your initial offers.

Now, on to “designing” specific offers.

2. The Decoy and Compromise Effects

The decoy effect is when the existence of a clearly inferior option increases the likelihood of the clearly superior option being chosen. An example (also from behavioral economics class) below: 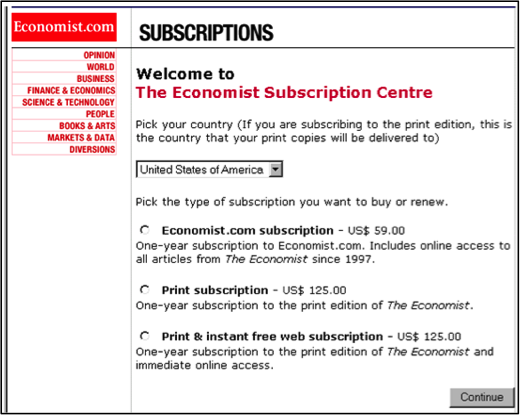 Meanwhile, the compromise effect is when an option becomes favorable because it is a compromise between the other options. Sometimes it is tough choosing between the $18-22 pastas and the $29-$38 entrees; the $18 linguini vongole seems like a great value, but the braised lamb shank is making your mouth water. If the restaurants want to drive you towards the more expensive entrees (as most do), then menu consultants actually recommend putting an even pricier item on the menu, maybe a $95 porterhouse alla fiorentina for two. The idea is not to get anyone to buy the porterhouse, but rather to make the entrees the “compromise” option.

Fantasy Baseball Takeaway: While the tyranny of choice shows that we will be more successful if we give our trade partners limited options, we may be able to nudge them toward our preferred option using some combination of the decoy and compromise effects. Let us see if we can do so via hypothetical:

Just as finding an undervalued trade target can improve our team, so too can getting into productive trade talks and structuring our offers in a way to beneficially influence decisions. Luckily for us, preference is not hardcoded as seen above. We go to the Predictably Irrational-well for a quote so nice we will use it again: Dan Ariely writes, “most people don’t know what they want unless they see it in context… Everything is relative, and that’s the point.” So keep contextual factors in mind as you work on those final pre-draft and auction trades.

You need to be logged in to comment. Login or Subscribe
touchstoneQu
Interesting piece. These are old fantasy baseball trading strategies, so it's nice to see economics finally catching up. ; )

You do warn against ridiculous initial offers, but I don't think you can emphasize that enough. A new owner came into my AL-only Scoresheet league and offered me his JD Martinez and Derek Holland for my Mike Trout and Andrew Miller, which was his way of getting me to begin negotiations for Trout. We don't speak to each other anymore.

In recurring leagues like mine, there's also a danger that using the above techniques to gain advantage in trades might pollute your relations with other managers, which is a problem, because there's a limited, constant pool of trade partners. For a grizzled veteran, having a trade partner go through the kabuki steps of offering closer X for outfielder B so as to eventually get to outfielder A is kind of annoying -- especially if closer X for outfielder B is a bit of a stretch. They will see through that.

There is value in offering something that's just a bit off to begin negotiations, however. That helps you see how the other manager values players, which will help you in future trade talks.

So, yeah. Finding that sweet spot for an initial offer is an art. I think that's my point.
Reply to touchstoneQu
loveablelosers
I agree with you in a vacuum but I've got some owners that no matter how much the deal favors them will always want to negotiate and drive you down. Then there are guys that if I offer then a legit deal they'll take it even if they're losing some on value if it helps their team. The key is to know which kind of owner each person in these long-term leagues is and whether they're going to be annoyed by the kabuki or in fact demand it.
Reply to loveablelosers
jjackhammers
Playing a multitude of fantasy sports I have found that having a good trade relation with every owner in the league is an absolute must! Sure you will receive offers that are absolute junk but I laugh when I hear of owners who get there feelings hurt and and won't talk to the owner anymore! Every owner values there own players higher than others so I just let a bad offer I receive roll off my back and continue to try to hammer out a deal.making trades is such a big part of fantasy sports it pays to keep all your options open.
Reply to jjackhammers
aea0016
I think for most it's not a matter of feelings being hurt but a way to deter a notorious lowballer from sending out frequent offers.

Yes, it is best to always be nice to any offeror and compliment even the worst of fantasy players. But imagine if everyone in the league did that. The guy won't get the message and he'll continue sending out these offers.
Reply to aea0016
ravenight
To use a true compromise effect, you would offer the reliever you liked more and preferred not to trade for someone that is more valuable than your target or in a package for your target and a more valuable guy. You'd basically say, "Well, Y is about as good as B" or "Y's a little worse than B, but if I threw in Z for C, that'd be about even, right?" - this is the $95 porterhouse, your guy that's priced to high to really consider. This doesn't have to be an outright fabrication - you can basically choose a guy you'd rather hang on to and legitimately claim that you want a premium for him because you like him. The point, though, is to offer up the guy you like not just to show that you're willing to trade valuable guys, but to make the smaller deal (X for A) seem like a good compromise.
Reply to ravenight