After debuting as a 20-year-old, Iwakuma was fairly mediocre in his early NBP career before breaking out at age 27 in 2008, when we went 21-4 with a 1.87 ERA and won the Sawamura Award. After a couple more solid seasons, he was posted before the 2011 season, but the Oakland A’s won the rights to negotiate with what was widely seen as a posting-fee bid aimed more at blocking division rivals than landing Iwakuma’s services in good faith. He went unsigned and returned to Japan, where he suffered a shoulder injury early in the year. The injury put a scare into MLB teams far and wide, and despite not requiring a posting fee after the ’11 season Iwakuma signed with Seattle on a not-a-typo one-year, $1.5 million deal (albeit with a couple million dollars in incentives, but still).

The industry-wide concern appeared warranted after Iwakuma struggled out of the bullpen to start his tenure in Seattle, but after moving to the rotation in July things started clicking. He traded in his curve for more sliders and splitters, with the latter pitch quickly emerging as one of the best in baseball. His coming out party happened in 2013, as he threw 220 innings of 2.66 ERA/1.01 WHIP ball and returned $25 of mixed-league value, good for fifth among all starting pitchers.

His season got off to a late start after he strained a tendon in the middle finger of his pitching hand in pre-season workouts. This would be a problematic injury for any pitcher, but for a pitcher who relies on a knockout splitter for virtually all of his superhero power it had the potential to destroy. The injury cost him all of April, and with it as much as 30 or 40 innings of production. He also endured a brutal stretch in the second half last season just as most head-to-head leagues were heading into the post-season. He closed the season with a Quality Start against the Angels, but in the six starts prior he’d given up 26 runs in 25 2/3 innings to raise his ERA for the season by almost a full run. He was again prone to the long ball as well, giving up just north of a dinger-per-nine to rank 63rd among the 88 qualified starters league-wide. He still cracked the top 30 by season’s end, but the lost innings and home-stretch swoon cost his owners a significant chunk of return value from what had been a top-15 season on a per-inning basis through early August.

Most importantly, the finger injury did not derail his splitter or put any kind of lasting dent in his overall effectiveness. His fastball and splitter both played as the third-best of their respective pitch types on a per-100 basis according to PITCHf/x data. That his two-seamer rates so effectively despite an average velocity south of 90 miles an hour should tell you all you need to know about just how devastating the splitter really is. Even with his struggles down the stretch he still posted the seventh-best WHIP of any starter, and he did it on the strength of a walk rate second only to Phil Hughes’ historic run. He was also one of the best pitchers in baseball at securing called strikes down in the zone, and given the documented shift of Major League Baseball’s strike zone farther and farther south in recent years, the ability to exploit that part of the zone is an excellent skill. It’s one that he developed from “very good” to “elite” last year: 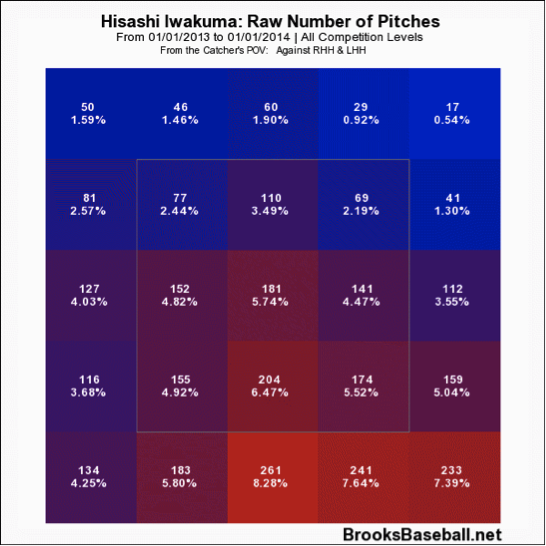 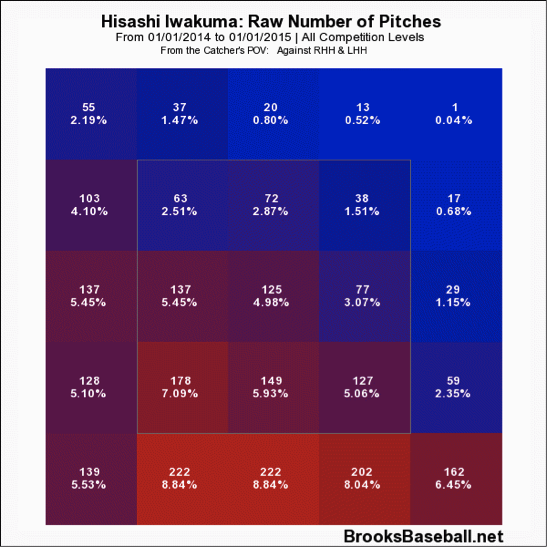 More than 63 percent of his pitches last year came in below the belt, up from 59 percent in 2013. Especially given his propensity to get beaten by the long ball, the step forward in keeping the ball down marked a very strong one in the right direction. He bumped his ground-ball rate back up above 50 percent, which was good enough for a top-25 finish among starters.

Iwakuma will turn 34 right after Opening Day this spring, and given the age, the shoulder injury in his not-too-distant past, and the poor close to 2014, there are likely to be some doubters popping up on the landscape. Sure enough, while NFBC managers on the whole haven’t been too scared thus far (he’s currently going 23rd among starting pitchers), there is significantly more negative variance to his ADP than average, indicating some doubt may indeed be bubbling under the surface.

There just isn’t much to suggest that he’s in danger of falling apart anytime soon, however. His velocity ticked down marginally by about a half a mile an hour last year relative to 2013, but that’s not really a cause for alarm – especially for a guy like Iwakuma. He did change his arm angle a bit last year, releasing the ball from a taller, less wide point. But the release stayed consistent throughout the season and appeared to be the result of an intentional mechanical tweak to generate more north-south plane, not a flag for potential injury. Meanwhile, Seattle’s defense, which was one of the most efficient in the league last season, projects to be a net-positive unit again in 2015.

Barring any serious warning flags in those areas, there’s only so much declining a guy with two elite pitches can do. Especially when those elite pitches play how Iwakuma’s play. Check out this chart from Brooks Baseball of scouting grade translations for Iwakuma’s stuff relative to other major leaguers:

His two bread-and-butter pitches, the two-seamer and the splitter, both show below-average movement. His fastball velocity is poor, his splitter solid-average. And yet both of these pitches played among the best in the world last year. Iwakuma’s profile for success might be among the most low-risk in baseball, and he should remain a strong play as one of the better SP2 options around regardless of format.

2015 will be a walk year for Iwakuma, who stands to enter free agency for his age-35 season in 2015. Safeco does not play as quite the homerun-suppressing haven it used to, but it’s still a below-average ballpark for long balls. Given his propensity for allowing hard fly-ball contact when he does elevate the ball there’s some risk beyond this season if Iwakuma ends up grabbing a multi-year deal with a team in an unfavorable ballpark. Still, given the profile of stuff and strategy I discussed above, he doesn’t fit the mold of a pitcher who is likely to just up and loose it as he ages. He’s not velocity-dependent, nor is he entirely environment-dependent thanks to strong ground-ball tendencies. His elite command of one of the best splitters in the game should allow him to remain a WHIP asset and an overall above-average to quite-good fantasy starter for the next sev