Davis was drafted as a two-way player out of junior college by the Rangers in the fifth round in 2006, signing for a modest $172,500. His power was lauded as a standout tool from the jump, but there were serious questions about his swing and how much of the power would actually play in games. After showing well in the Northwest League to start his career, he exploded across High-A and Double-A in 2007, posting a California League-aided .945 combined OPS and 36 homers, and cracking the Rangers Top 10 that winter. He was even better in 2008, pummeling minor-league pitching and earning a major-league call-up, where he more than held his own to the tune of a .284 TAv and 17 homers in his first 317 plate appearances. His whiff rate subsequently spiraled out of control for the next couple of seasons, preluding a trade to Baltimore, and the rest is history: his whiff rate remained monstrous, but so did the power. A .282 TAv season in 2012 was followed by his staggering .358 TAv, 53 home-run outburst in ’14, before the BABIP gods swallowed him whole in 2014.

Uh… um…well, he… hmmm… I guess he… well, no…. hrm. Yeah, not much. He gained third-base eligibility! That’s pretty sweet. And… well, he hit 26 homers, and that was a top-20 total in the game last year. So that was also pretty good.

Unfortunately, all of his home-run value was more than offset by the combination of a horrifying .196 AVG and mediocre 137 R+RBI total. He earned just $14 in AL-only formats and a scant six bucks in mixed leagues to check in 23rd among 1B-eligible players and 27th among third basemen. Overall, he was the 188th–ranked hitter in a season where he was drafted as a consensus first-rounder. That, my friends, is how you lose your league without ever lifting a finger. He missed time with an oblique strain that cost him time at the end of April, and may just have lingered on after his relatively quick return. He missed the final couple weeks of the season after he was popped for taking Adderall without an exemption. After his whiff rate had crept below 30 percent for the first time in four seasons during his monster 2013 campaign it hopped back up to 33 percent last year, and that was the highest rate of any qualified hitter. Despite a robust line drive rate that actually came in north of his career average (and considerably above league average) his batted-ball profile was eaten alive by the shift and general misfortune, resulting in a gross .242 BABIP. For a player who strikes out as much as Davis, that kind of combination gets you a ticket to the subterranean funk and muck below the Mendoza Line.

Well, on the one hand, it’s awfully tough to project a guy who just finished a season in which he hit a line drive 25 percent of the time to post another BABIP as low as Davis’ 2014 mark. On the other hand, Davis is an extreme pull hitter against any pitch that isn’t hard and straight. And over the past couple of seasons he’s also become significantly more prone to yanking the hard and straight ones, too: 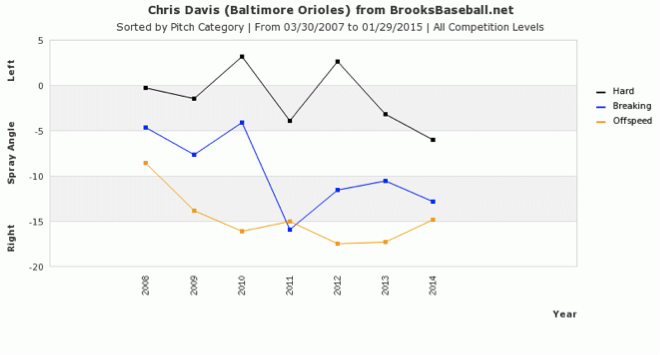 Just as troublingly for Davis, last season he started putting dramatically more of those pulled off-speed and breaking pitches on the ground: 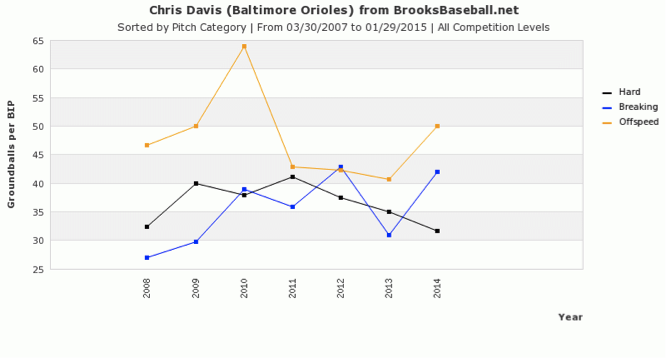 You can guess where this is going. According to Jeff Zimmerman’s research teams shifted on Davis a staggering 83 percent of the time in 2014 after doing so in 52 percent of his plate appearances in 2013 and only 32 percent in 2012. And in a shocking development, he posted identical .182 BABIP marks on breaking balls and off-speed pitches in 2014 after posting career numbers of .457 and .306, respectively. So basically, the shift may very well have killed Davis’ value as much as just about any other hitter in baseball last year, and it ain’t going anywhere unless Rob Manfred ends up banning the practice outright. While it should be a reasonably safe bet that he won’t run into another sub-.200 season in 2015, it’s also probably unlikely that he gets back to approaching the .260-.280 range unless his spray chart looks dramatically different next season.

The good news is that his power is playable even if he’s a .240 hitter. His fly-ball and home-run rates were both in line with his career norms last season, and it’s a combination that has yielded a dinger every 16 at-bats of his career. Projected out to a full-length 525 at-bat season a “normal” season of batted-ball results should be enough to get him up north of 30 homers again.

In the realm of counting stats, opposing teams have become much less enthusiastic about pitching to Davis with runners in scoring position lately even despite their successful defensive adjustments. Last season he actually produced runs at a clip right around his career norm when he logged an at-bat. But he saw his walk rate jump four points to 16 percent, leading to an overall decrease in production-per-plate appearance. After losing some key offensive depth this offseason PECOTA projects the O’s to lose a few notches of TAv as well, which doesn’t help matters.

All told Davis’ PECOTA projection of a .251 AVG, 30 homers, and 166 R+RBI probably represents a pretty fair approximation of what managers should be expecting on draft day. That’s basically what Lucas Duda did last year, and he was narrowly a top-60 hitter in mixed leagues with $20 of value. He’s currently going off the board 71st overall in early drafts, making him a dodgy proposition to return surplus value.

It’s pretty likely that we saw the height of Davis’ career in 2013, and chances are slim that he posts another 50-home-run campaign with a playable AVG. Davis enters his age-29 season this year, so the window is closing on his physical peak. He’s a giant hulk of a man whose power is based on a massive, rotational swing and excellent hand-eye coordination. The body type is not one that typically ages well, and once his bat speed starts to slip things could get ugly real fast given the already-extreme whiff rates.

It’s also pretty likely that, barring another catastrophic Manny Machado injury, 2015 will mark the final year of Davis’ third-base eligibility. So owners should enjoy the positional versatility while they’ve got it.

All of this said, the raw power is some of the best in all of baseball, and it should remain at least usefully playable for another couple of seasons at least. As long as expectations are kept in check he should hold value as a CI bat for the foreseeable future, though given his current ADP it may be that he projects for better return on investment two or three years down the line if his long-term PECOTA projections come to pass.

You need to be logged in to comment. Login or Subscribe
noone99
In an league where AVG, OPS and OBP are all categories and only 10 offense spots, would you keep a 3B elig Davis over Freddie Freeman or Kyle Seager?

No prices and 55 total keepers in the league

Thanks
Reply to noone99
BuckarooBanzai
In a standard format I think it's an easy call to go Freeman, Seager, Davis in order of preference. But OBP & OPS swing things quite a bit IMO and I'd strongly consider keeping Davis over Seager. Really comes down to how much risk you want to take. Davis' ceiling is significantly higher than Seager's in this format, but the downside/collapse risk is astronomically higher. Given the limited keeper format the upside play's probably worth making. FWIW, Seager likely has some fringe trade value that's worth exploring, so I'd shop him hard to see if you can't upgrade a draft pick or something before you make your decision.
Reply to BuckarooBanzai
noone99
Thanks for the thoughtful answer
Reply to noone99