A first-round draft pick by the Toronto Blue Jays in 2003, Hill has endured a roller-coaster career. He was a useful, if unspectacular, player for the Blue Jays for several years before exploding on the scene with 36 homers and a .286/.330/.499 slash line in 2009. The power carried over to the following season with 26 dingers; however, the batting average plummeted.

The veteran subsequently played himself out of favor in Toronto, but enjoyed a resurgence in 2012 with an .882 OPS and 26 homers. That season re-established his fantasy relevance and caused a headache the following year when he fractured his hand and only played 87 games. Of course, he still posted an .818 OPS and hit 11 homers, even hitting .291, so fantasy owners still found value when he was on the field. Hell, the former LSU Tiger was a fringe top-20 fantasy second baseman, and he only played half the year.

He entered 2014 with some lingering health concerns due to his hand injury, but many fantasy owners held out hope that his strong 2012 and 2013 seasons would carry over and provide some sneaky late-round value.

First and foremost, the 32-year-old proved healthy and racked up 541 plate appearances. Although he had largely been a workhorse through the majority of his career—only missing extensive time in 2008—it’s important that he was able to remain in the everyday lineup after returning from a fractured left hand. Injuries to the hand/wrist area for hitters are always nerve-wracking.

Unfortunately, that’s pretty much the extent of the positive news for Hill last season. He was the 28th-ranked second baseman in ESPN leagues and only hit .244/.287/.367. If we want to dig deep, we could perhaps celebrate that his 24.5% line-drive rate was the highest mark of his career, but that’s the dimmest of silver linings that I could provide. I’d rather watch Nicolas Cage in The Weather Man on repeat for 48 hours than draft a squad of hitters based solely on their 2014 line-drive rate. And if you made it through that entire film with your eyeballs intact, I’m not going to offer you some sort of congratulations or a consolation prize. I’m appalled and question your decision-making abilities.

Batting average can come and go on the whims of BABIP, to an extent, but power largely stays more consistent. Not for Aaron Hill last year. The power dropped precipitously, as he only hit 10 homers and posted a .124 ISO. That was the 24th-best ISO amongst second basemen who had at least 200 plate appearances last year. I mean, even the corpse of Brian Roberts had a .123 ISO. His average batted-ball distance also ranked 204th in Major League Baseball. What makes it worse is that Chase Field is a hitter-friendly ballpark, making the concerns over his power decline even more acute.

It should be noted that Hill is coming off the fractured hand, and it occasionally takes hitters a year to fully recover—at least, anecdotally. The power outage could be explained away by the hand injury and perhaps be expected to bounce back in 2015. We’ll cross that bridge shortly.

Some have pointed toward the consistency in his swinging-strike rate (6.9 percent), which matched his career average, to suggest the core skills hadn’t changed much. That is to say, he wasn’t chasing bad pitches more often, he wasn’t swinging-and-missing more often, nor was his strikeout rate suddenly unreasonable. Perhaps the issues can be solely attributed to his injury.

I’m not convinced it’s that simple. Hill struggled with pitches on the inner half more often than he had previously in his career. Moreover, his swinging-strike rate dropped dramatically on pitches below the zone, but over the plate. And while that may sound good, he swung at those pitches just as often as he has in the past and made more contact, just worse contact. His slugging percentage plummeted.

Here is his slugging heat map from 2014: 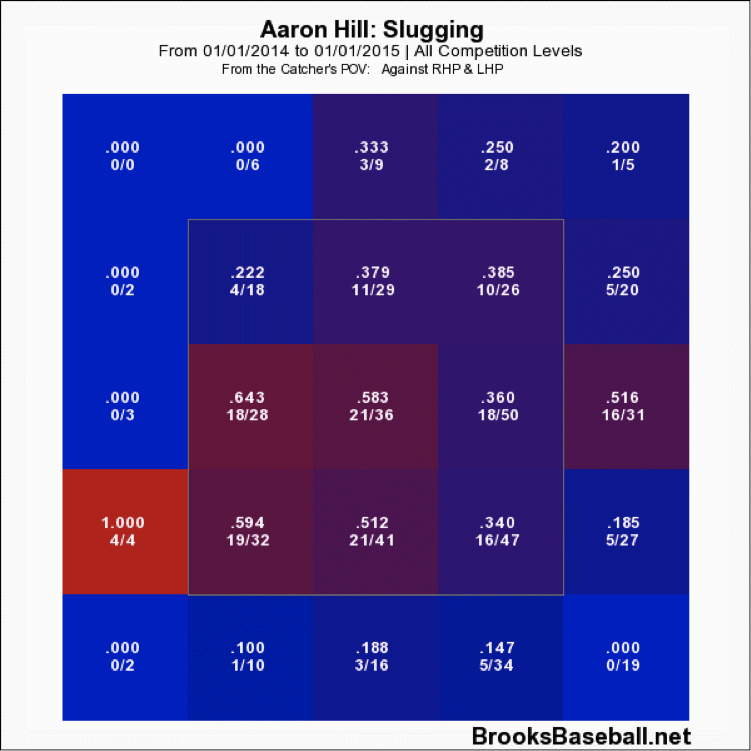 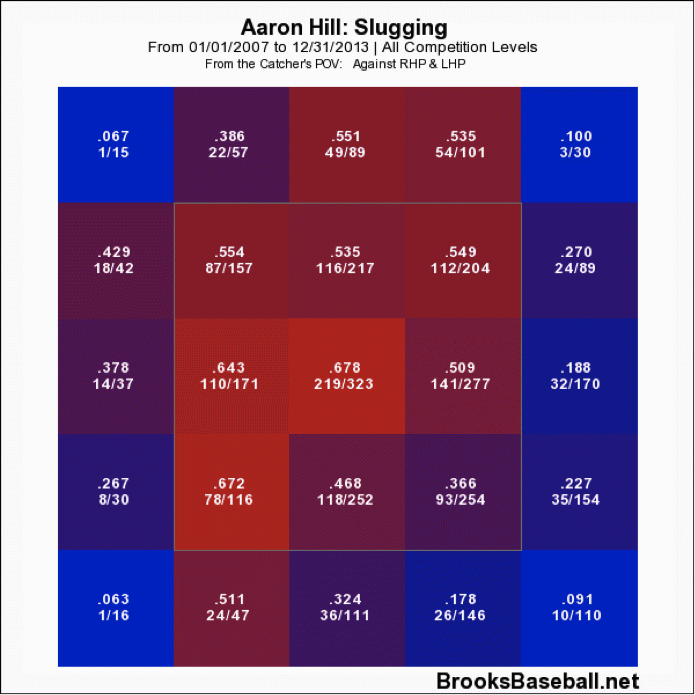 Hill also struggled to capitalize on anything inside, as evidenced by the heat maps provided. Moreover, his swinging-strike rate increased on pitches off the inner half, which he has historically handled pretty well. Considering he’s a pull hitter, struggling on the inner half and on pitches down in the zone is not a recipe for success. Those should be his bread and butter, and they have historically been so.

I’m interested in what Aaron Hill can do in 2015 because he displayed all the trends one would expect from a guy recovering from a hand injury. He struggled to hit for power and he struggled hit barrel balls on the inner part of the plate (especially just off the black). The second year removed from the injury could prove to be the salve he needed, and he could be a creative back-end option on draft day for some elusive power at a middle infield position.

On the other hand, he’ll turn 33 years old, and in the past 10 years, only two second basemen (min. 200 PA) have hit more than 15 homers in their age-33 season: Dan Uggla in 2013 and Mark DeRosa in 2008. It’s rare. Furthermore, Uggla hit .179 in his age-33 season and is no longer relevant, while DeRosa only had one more decent year before falling off a cliff. Second basemen traditionally don’t age well. It seems strange to bank on Aaron Hill hitting 15+ homers with that history, even if he’s poised for the magical second year back from a hand/wrist injury.

Perhaps a reasonable expectation for Hill is to do what Chase Utley has done for the past few years. Utley has essentially hit .255-.270 with a home run total in the low-teens. Of course, he runs more than Aaron Hill—and that must be considered—but you’re looking at a guy ranked outside the top-10 and with fewer stolen bases. That’s a fringe top-15 second baseman in a position swarming with young, exciting talent.

The Great Beyond? How much of a “great beyond” do you get when you’re already entering your age-33 season? I mean, I haven’t reached the age-30 plateau myself, and I’m already wondering how much of a great beyond I have to look forward to in my life. I complained about my knees being sore the other day and blamed the damp, dreary weather in Chicago while complaining about having to climb the stairs everyday to the third floor. That can’t be a good sign. On a related note, I’ve pretty much decided that I’ll have my mid-life crisis a bit earlier than most.

Anyway, Hill has two years remaining on his contract for his age-33 and age-34 seasons. His defense is suspect, so if his bat isn’t above average, the Diamondbacks may not be willing to trot him out there every single day for the next two years. However, if Hill can bounce back and hit for power, he could have another year or two of fantasy relevance remaining in his career.

Overall, though, it’s not a promising picture. He won’t steal bases and isn’t batting in a strong Diamondbacks batting order. As the speed continues to decline due to age, the batting average will be tougher to maintain. Thus, everything hinges on his ability to reclaim the 20-plus homer ability. I hope that I’ve outlined some reasons why it may return, but it’s conjecture based on the premise that last year was an injury-related anomaly. It may not be. After all, we’ve seen him hit eight homers in 571 plate appearances in 2011. For dynasty-league owners, though, don’t expect much value past the 2016 season—and even then, you should feel fortunate to get that much.

You need to be logged in to comment. Login or Subscribe
bobbygrace
This was a really insightful piece on an intriguing player. As a guy about to enter his age-35 season, I have more than one reason to pull for a comeback by Aaron Hill.

The 30s are great, by the way. It becomes clear that you're entering the physical decline phase, but the benefits of experience more than make up for it in your average off-the-diamond life. In baseball terms, I have developed a more patient approach and am more able to make adjustments than I was in my 20s.

The way I see the game has changed, too. I have more respect and admiration for guys on both sides of the age spectrum -- for the extraordinary maturity and discipline of the guys in their teens and early 20s on the one hand, and for the ability of the oldsters to overcome their physical decline on the other hand.
Reply to bobbygrace