Ummm… what now? An entire fantasy player profile about Ike Davis? The guy that returned a whopping $8 of NL-only value last year? The guy who’s currently going as the thirty-eighth first baseman off the board in early NFBC drafts, behind the Yonder Alonsos and Mitch Morelands of the world? Yeah, that’s the guy. He doesn’t deserve that kind of a draft day fate. Walk with me. Let’s talk about Ike Davis, and why he shouldn’t be that irrelevant to your 2015 plans.

Player Background
Davis was drafted 18th overall in 2008 by the Mets out of Arizona State, where he posted a monster season in his junior year to put himself in the running for a first-round selection. He was lauded for his advanced pitch recognition and strong bat speed, but scouts questioned his swing length and his struggles in multiple wood bat leagues were noted as a legitimate concern. After struggling initially he posted a strong season across High-A and Double-A in 2009, leading to a spot on the BP 101 prior to the 2010 season and ultimately an aggressive early-season promotion to The Show that spring. He responded with a solid .299 TAv rookie campaign, but after a hot start to his follow-up effort, he lost almost all of 2011 to a nasty ankle injury. He came back and hit 32 bombs in 2012, albeit with a BABIP-impeded .227 batting average. He’s struggled subsequently to find any kind of offensive consistency over the last two seasons, bouncing from Queens, to Pittsburgh, and now on to Oakland in exchange for a mere international bonus slot.

What Went Right in 2014
Well, he stayed pretty healthy. That’s something, right? He lost a chunk of time in spring training to a calf injury, and in turn he struggled mightily out of the gate. But then he had a nice little month of May, in which he hit .326/.408/.453 and elbowed his way into regular playing time before everything came crashing back down in June. The most encouraging thing he did last summer for our purposes was post strong numbers against right-handed pitching. In almost 400 plate appearances he hit .247/.360/.405 with an impressive 60-to-66 BB:K ratio. He dramatically improved his whiff rate against opposite-handed pitching, to the tune of swinging and missing almost 4.5 percentage points less often. Best of all, he was able to cut out all of the whiffs while still hanging onto the vast majority of progress he’d made in upping his walk rate in 2013. And while on the surface his .247 batting average looks generally appropriate given a BABIP in line with his career average, his 24% line drive rate suggests he may have deserved a better fate. He also appeared to get unlucky in the homerun department, as his 10.5 percent HR:FB rate was about six points off his career number despite a nice rebound from his disastrous 2013 performance in batted ball distance.

What Went Wrong in 2014
If we’re being honest, pretty much everything. The solid numbers against righties weren’t really up to par for a legitimate starting first baseman, in part because of some of the luck-related issues mentioned above, but mostly because barely slugging .400 against favorable matchups just doesn’t cut it at a position as deep as first. Meanwhile he bottomed out against left-handers, against whom he went just 3 for 32 with 12 strikeouts. You’ll note the tiny sample, and that was very much on purpose given his career .577 OPS against same-handed pitching. He also lost 85 points off his career slugging percentage against fastballs, and that was a troubling result given his skillset pretty much requires him to mash fastballs in order to be a useful player. As his power has stagnated, pitchers have been less afraid to challenge him with hard stuff, and he saw fastballs more than 60 percent of the time last season.

What to Expect in 2015
The case for optimism is basically a four-part argument, and it looks like this: He’s in his physical prime, he’ll have a straight path to majority playing time next season, he’ll hit in the middle of his lineup when he does play, and he’s going to an organization that both values his strengths and knows how to hide his weaknesses. I’m not typically one to get too wrapped up in the whole “he’s 27! He’s going to be good now!” line of thinking, but in cases where a player previously has shown flashes of an elite skill—and especially when that skill is power—it’s certainly worth noting that he’s still at what should be his physical peak. While arguing for direct causation between batted ball distance and homerun rate is a fool’s errand, it’s still probably appropriate to note that even despite the move to a tougher hitting environment at the trade deadline last summer his losing almost two percent on his homerun rate despite hitting the ball significantly farther last year looks fishy. Oakland is (marginally) an even worse ballpark for left-handed power than Pittsburgh, so his quest for redemption certainly won’t be setting-aided. But nominal and normal positive regression towards his career average should be enough to get his homer total into the high-teens without any other steps forward.

But the possibility of a forward match shouldn’t be entirely discounted, either. He dramatically refined his approach against right-handed pitching last season, and the progress was both quite real and potentially quite sustainable. His contact rates shot up almost eight percentage points across the board, resulting in a swinging-strike rate that cratered by 3.5 points. I talked above about Davis’ lost slugging on fastballs, but it certainly wasn’t for lack of execution in attacking them. He’s gotten progressively better at making contact with the hard stuff over the last couple of years: 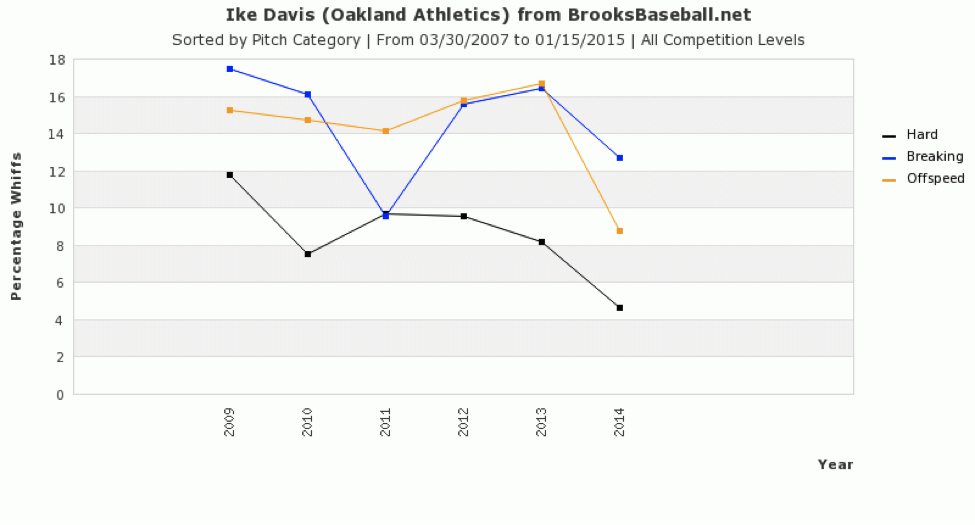 What he didn’t do was drive those balls he put in play in the air as often or with standard authority last year, which may turn out to be a harbinger of decline or a one-year blip of misfortune. So to reiterate, we have ourselves a situation here in which the pitch selection and approach against righties has developed in an impressive an linear way, the contact rates have jumped significantly, and the power has previously manifested itself in monster form over the course of a full season. I’m not going to sit here and guarantee that all of these elements are likely to now coalesce into another 30 homerun season, but at a minimum there are some very interesting raw materials here for end-game value generation if a couple things do break right.

The Great Beyond
In this case, it really doesn’t matter whatsoever—we’ll cross the 2016 bridge when we get to it. He’ll enter his final year of arbitration eligibility in 2016, and while he settled for a likely pay cut off his projected value this year he’ll still be due for a salary bump into the $5-6 million dollar range with another season of league-average production. But if league-average production is all he’s able to muster this season it’s highly unlikely he’ll be landing a guaranteed deal anywhere in 2017, nor will he be relevant to your fantasy league. Again, none of this really matters for our purposes. As I noted in this week’s Adjuster he makes for a decent upside gamble in OBP leagues regardless of format. His .111 OBP-AVG spread was the fifth-best mark among first basemen last year, and his walk rate against righties has been legitimately elite over a four-digit sample of plate appearances now. Meanwhile, for the majority of players in standard formats he’ll be there waiting for you at the end of your draft, and if you’re in an AL-Only or deeper mixed league he’s worth considering for roster depth and occasional deployment when he’s set up to face a string of righties. In shallower leagues he’ll all but certainly go undrafted and be someone to stick on your monitor list. If the approach does indeed hold—as I suspect it will—and the power shows signs of once again playing as it very well might, he’ll have the potential to provide nice return on a dirt-cheap FAAB investment.

You need to be logged in to comment. Login or Subscribe
huztlers
Nobody should draft Ike Davis.
Reply to huztlers
BuckarooBanzai
http://moviesmedia.ign.com/movies/image/article/100/1000759/ghostbusters-20090702101439824-000.jpg
Reply to BuckarooBanzai
lemurine
Nice article, well written, things to think about. Very useful. Thank you.
Reply to lemurine
BuckarooBanzai
Thanks, glad it was helpful
Reply to BuckarooBanzai
mattcommins
Ike Davis or Jon Singleton? Davis or Napoli? I'm taking Davis over both of them. Good article and a great read.
Reply to mattcommins
jfranco77
Napoli had his sleep apnea fixed this off-season. I think I'd go Napoli, Ike, any other sentient being I could find, Singleton.
Reply to jfranco77
BigFuzzy35
It's crazy how much Davis's stock has plummeted in the last year and a half or so. Thank you for the very informative article. You gave me even more rational hope to coincide with my irrational love for the man.
Reply to BigFuzzy35