Here’s the primer for this infographic series.

First base is a very different animal from the rest of the positions, fantasy-wise. There are some heavy hitters who can carry your team as illustrated by the five tier guys. The middle class still has value fantasy wise and it’s not until you hit the dregs of the position that you start to run into guys who can actively hurt you in spite of their strengths.

Notes
Joe Mauer lost his catcher eligibility last season and isn’t going to be getting it back. That’s good news for his real-life value, as he slides into the back half of his career and will have less stress put on his knees and legs. It’s bad news fantasy-wise, as he goes from a solid-if-unspectacular catcher to basically James Loney’s equal. I made a special graph to illustrate the differences in Mauer’s value between the two positions. 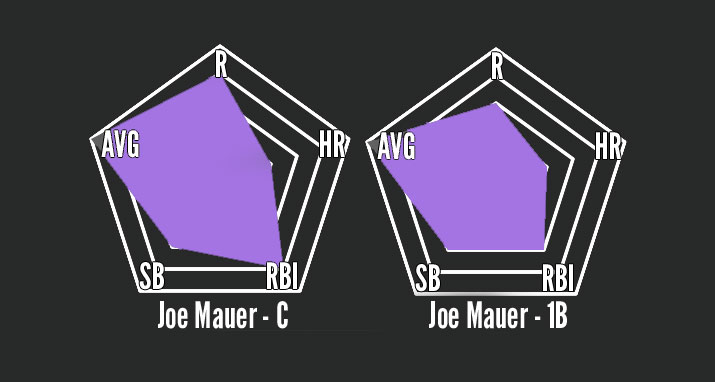 As you can see, as a C, he fares well in runs and RBI, earning 4s and 5s in the categories, respectively. If you click back to the catcher graphs (link above) you’ll see that his predicted production is probably enough to earn at least a three-star ranking, but for first base, it’s less appealing, and Mauer becomes a borderline choice.

PECOTA (still pre-update) didn’t like Kennys Vargas’ playing-time possibilities, so it dings him in the counting stats but still likes his home-run output enough to rank in the middle tier for the position. When the update comes around, I’ll do a peek at him and Matt Wieters in terms of what PECOTA thinks of them with playing-time adjustments.

I added a bid chart at the bottom at the behest of commenter Sharky, who had a valid point in bringing up volatility regarding projections. This isn’t the final answer, but the bid chart displays how opinions can change on a player in a year. Some guys (like Albert Pujols) are so consistent that their production, 2014 bid, and 2015 bid appear as a small grouping with overlap. In cases where either of the numbers match (production, 2014/2015 bid), I reduced the opacity and blended the two bubbles, creating the weird color combos that’ll rarely show up. Other guys, like Prince Fielder, saw wide variability in their numbers and have a huge range between dots.

Without further ado, here are the charts:

You need to be logged in to comment. Login or Subscribe
apilgrim
How about Ike Davis?
Reply to apilgrim
MRubio52
Same issue as Ryan Howard, I can tell you PECOTA really does not like his fortunes.
Reply to MRubio52
Shawnykid23
Really nice feature with the bid/production chart!
Reply to Shawnykid23
SadMagistrate
Great stuff.
Reply to SadMagistrate
bleaklewis
Really loving the Bid/Production chart, hope you keep it for the whole series.
Reply to bleaklewis
MRubio52
Thanks, I will be doing this moving forward.
Reply to MRubio52
tkohl229
I may be missing something, but why is Prince Fielder ranked as Average? Looking at the charts, it seems as though someone like Napoli would produce way more, but is ranked down in Poor.

Napoli's looks similar to Moss' but Moss will help more in HRs so I can see why Napoli would be in the lower class. In he case of Fielder though, not sure why he's there.
Reply to tkohl229
MRubio52
The tiers are pulled from those pulled from Nick Shlain's rankings, I did not rank them on my own here.
Reply to MRubio52
dbiester
In the quest to convey more information, I fear this year's graphic is less readily understandable than last years.
Reply to dbiester
Bob1475
ummmm- Ryan Howard?
Reply to Bob1475
MRubio52
We did not rank him, I might put together a "just missed" list with a few guys but we'll see how the rest of the rankings go.
Reply to MRubio52
okteds
I might just replace all my cheat sheets with these charts. Great visualization!
Reply to okteds
MRubio52
Thanks again for the kind words everyone
Reply to MRubio52
kvamlnk
Visualizing the player stats:
Should we care about the relative sizes of the pentagons?

If the relative sizes matter, what are the correct ratios?

If you think this is worth pursuing, I'm willing to assist with computing sides or radiuses to fit the desired parameters, and with scripting the image generation if that would be useful.

(Not meant as a grumble. The visualizations are useful just as they are.)
Reply to kvamlnk