In early August 2014, Jonathan Lucroy was the top-producing fantasy catcher, and it wasn’t exactly close. He was so far clear of second place that it took an otherworldly performance from Buster Posey over the final two months to surpass the 28-year-old backstop. Still, Lucroy established himself as an elite fantasy option at the catcher position. Owners who drafted him, on average, did so outside the top-five catchers– and those owners were collecting massive surplus value throughout the entire year.

The former UL-Lafayette Ragin’ Cajun won’t slide under the radar in 2015, though. He and Buster Posey will be the cream of the catching crop, and the price tag will reflect that. Thus, fantasy owners must feel confident that Lucroy is a good bet to produce elite catcher numbers. Drafting a top-tier player always feels risky, as spending loads of money on a tankjob puts obscene amounts of pressure on the remainder of the draft to overproduce.

Good news: Jonathan Lucroy has developed into a mature, dangerous hitter who should continue to be in the “best catcher” discussion for fantasy. Hell, I’d even argue he’s firmly ensconced himself in that discussion for real-life baseball, considering his above-average defensive chops behind the dish.

The Brewers’ catcher has three key attributes that illustrate his skills as a hitter: (1) he walks as much as he strikes out; (2) he doesn’t feature any discernable platoon splits; and (3) he utilizes the whole field, which makes him difficult to attack as a pitcher.

In 2014, Lucroy walked 10.1 percent of the time, while striking out in just 10.8 percent of his plate appearances. That’s not quite Victor Martinez-esque, but his 0.93 BB:K still ranked fourth best in all of baseball. In August, I wrote about Lucroy’s consistently improving plate discipline, which has allowed him to see more fastballs, against which he feasts. On a more basic level, though, his walk and strikeout rates have trended in the right direction ever since he made his debut in 2010.

That’s precisely the development fantasy owners wish to see from young hitters. Lucroy has increased his walk rate every year in the majors, while his strikeout rate has steadily decreased. That displays his growth at the plate, indicating a level of comfort and understanding that continues to expand.

Furthermore, his lack of platoon split reflects adroit skill at the plate. He posted an .837 OPS against righties and a .838 OPS against lefties. His walk rate and strikeout rate were also better against same-handed pitching—0.79 BB:K vs. lefties and 0.98 BB:K vs. righties. Such numbers assure fantasy owners that they aren’t drafting a guy who should sit against tough righties in daily leagues, and they’re likely a large reason why the Brewers have experimented with playing Lucroy at first base. Ya know, aside from the fact that first base has been a dumpster fire in Milwaukee since the departure of Prince Fielder.

Finally, it won’t show up in any fantasy category, but Lucroy’s ability to use the whole field makes him a well-rounded and dangerous hitter. He has few holes in his approach or swing. He’ll take the baseball where it is pitched, as shown by the following hit chart: 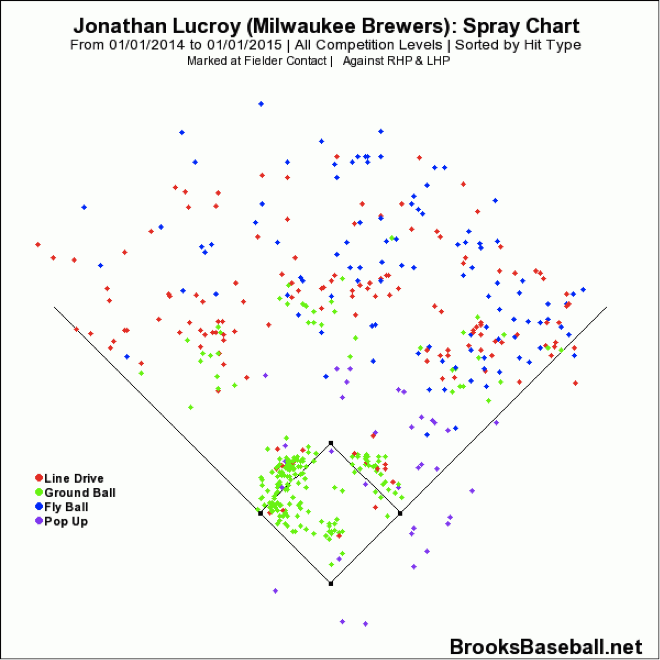 It’s obvious to see that Lucroy wore out right-center and right field. Much of his power still comes to the pull side; however, the 2014 All-Star drives the baseball to the opposite field so well that it forces pitchers to challenge him inside in an attempt to jam him. That’s when he’s able to jump on pitches and launch home runs. He won’t challenge for any home run titles, but Lucroy hasn’t hit fewer than 12 home runs since his rookie year in 2010. Although some have suggested that home run total is bolstered by Miller Park and he lacks average power, he posted a higher ISO on the road (.192) than at home (.134) and hit more homers on the road. He’s not unnaturally benefiting from the offensive-friendly environment in Milwaukee. He’s just a quality hitter.

For fantasy purposes, Lucroy’s situational context also matters. He began seeing significant time in the second spot of the batting order late in the season, before moving to the three-hole with Braun’s injured hand making him ineffective. Considering Braun’s offseason surgery has the team cautiously optimistic for his full recovery, it seems likely that Lucroy returns to the two spot, batting in front of Braun and Aramis Ramirez. It’s an offense that can put up runs, if everyone is healthy. But hitting up in the order should help Lucroy bank some counting stats.

Fantasy owners also benefit from the six-foot catcher playing for Ron Roenicke, who often frees his players to frequently run on the basepaths. In fact, over the past three seasons, only Russell Martin has more stolen bases (19) than Lucroy’s 17. That’s an added benefit to Lucroy. I’d argue he’s a bit more unlikely to run if he bats in front of Braun all year; however, he does have the capability to annually steal 5-10 bases.

Some people have suggested his BABIP will drop from .324 and not to believe that he’ll hit over .300. I think that’s rather simplistic, as his career BABIP is .311. In addition, he posted a .290 BABIP in 2013 and was still the 4th-best catcher in fantasy baseball. If that’s his BABIP-related downside, I’m all about that.

I said it on Monday, and I’ll say it again right here. Jonathan Lucroy and Buster Posey are easily the top two catchers in fantasy baseball, and they’re both quality buys on draft day. As much as is possible in baseball, they’re safe bets to produce. Lucroy has improved every season in the big leagues. If that continues, he’ll be a bona fide superstar in 2015—even if it is difficult to imagine him trumping a six-win season. Fantasy owners will reap the benefits of 600-plus plate appearances, which can be a rarity at the catcher position, and have someone who will contribute across the board. Stud.

You need to be logged in to comment. Login or Subscribe
stonepie
any concern over his ISO dropping each of the last 3 years?
Reply to stonepie
jimmyb1799
It's a good question, but I don't have huge worry on that front. Nothing about his approach has changed negatively and his average batted-ball distance has remained consistent over the past couple years. It also hasn't reflected a notable shift down in his number of extra-base hits. It's something to track, certainly, but nothing that would scare me away.
Reply to jimmyb1799
huztlers
Another thing to keep in mind with a catcher is how quickly they drop off. Even if they are healthy, they take a beating and they don't last like other players. That decline could be coming very quickly. I don't think anyone should ever be too excited by investing a pick in a catcher. You can't count on them to be steady contributors for so many reasons.

I just mention this because there seems to be so much buzz around this emerging superstar. It is great when you draft a C who breaks out, but when you start having real expectations, you might end up with 2014 Y Molina.
Reply to huztlers
gaphitter75
Does his ability to use the whole field when hitting translate into a higher BABIP (than what can be expected based on batted ball type?)
Reply to gaphitter75
seabass77
I think we might see that ISO go up again this year because of fatigue management. He was worn out the last 2 months from overuse. I bet he plays first base often/every time against a lefty. I feel he will be fresher and we might see that ops against lefties go up too.
Reply to seabass77