I’ll admit up front that I have a huge soft spot for Mike Minor. I acquired him in my home league as a buy-low guy in late May of 2012, and he proceeded to return gobs and gobs of surplus value for me over the following season-and-a-half. I didn’t end up owning him in any leagues this past season, and I was pretty bummed out about that coming out of my assorted drafts. Sometimes the best deals are the ones you don’t make, though, right? According to NFBC data Minor was taken as the 29th starting pitcher off the board last spring, yet Mike Gianella recently figured him as the fourth-biggest bust among NL starting pitchers after he returned exactly zero dollars-worth of production in a season plagued by injury and poor performance. So what happened here, and where should we be setting expectations for Minor in 2015 and beyond?

The injury issues probably deserve front and center attention as top billing in our story. Minor had what can be charitably described as… well, just a terrible-sounding operation to remove scar tissue from his urethra as the new year dawned. In addition to making men around the country wince and recoil, the procedure knocked him off his standard throwing schedule heading into spring training and led to some shoulder inflammation after he tried to ramp up too quickly. The shoulder issue turned out to be a nagging one, forcing a DL stint that cost him all of April and ending his season prematurely in September as the Braves fell out of contention. When he did toe the rubber in between those shutdowns the results were obviously quite poor relative to the pitcher we saw over the previous 18 months. And the first thing that jumps out in looking at his profile is that Minor’s release point for the vast majority of the season was significantly higher than it had been at any point since his first-half troubles in 2012. 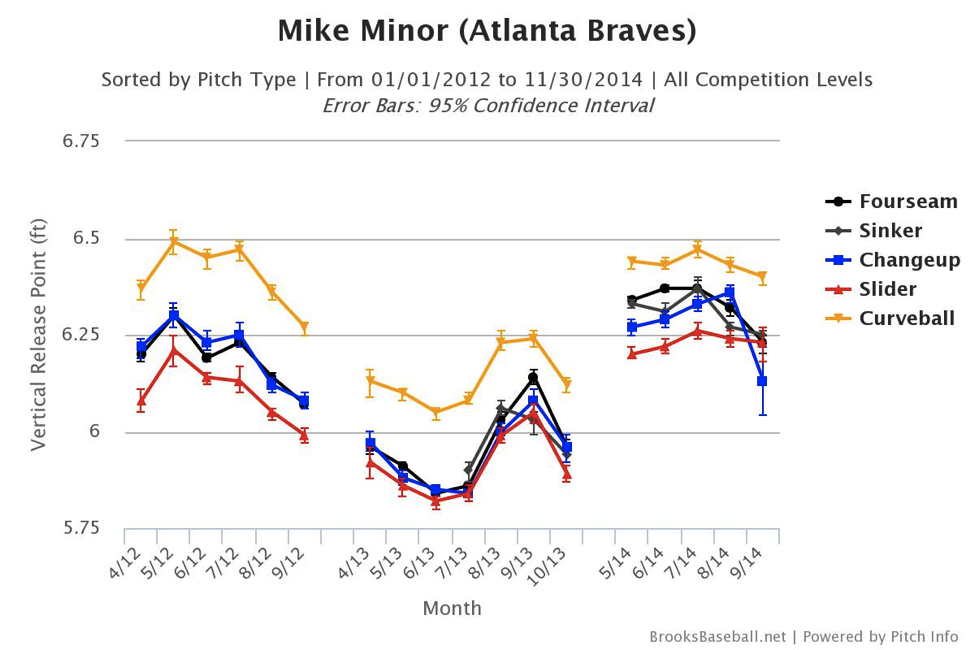 While theoretically this evolution could’ve been the product of a strategic choice by his coaching staff, it’s probably not irresponsible to speculate that the shoulder discomfort played a significant role in driving the change. With the taller release, Minor lost a corresponding amount of movement on his pitches: They flattened out north-to-south, and they stayed truer east-to-west. That had a very real impact on his ability to generate swings-and-misses with his secondaries in particular: All told he lost an alarming seven percentage points off his changeup whiff rate and another three percentage points off his deuce, and those losses were the primary drivers behind an overall swinging-strike rate that collapsed by 2 ½ percentage points. His contact rate jumped a full five points according to PITCHf/x data, and more balls in play are not necessarily a good thing for a pitcher with traditionally extreme fly-ball tendencies.

On cue, enter the homerun ball. After managing to pare down his long-ball allowance in 2013 the pendulum swung hard to the other side of his career average this past summer, when he gave up 21 round-trippers in just 145 1/3 innings. Now, Minor’s always struggled with homers, and this has been particularly true against right-handed hitters. Righties have taken him out of the yard to the tune of 1.21 homers-per-nine in his career, versus a 0.86 rate for lefties. This year, however, that former number ballooned to 1.47-per-nine as he allowed 19 of those 21 dingers to righties. Minor was no longer able to keep opposite-handed batters honest with a plus change-up, and they responded by slugging a brutal .647 against his four-seam fastball. Ugly.

Yet lost in some of these hideous trends, there actually were a handful of semi-positive things on which believers can still hang their hats. For one thing Minor rolled out a two-seamer, and it was generally successful in helping to curtail his extreme fly-ball tendencies. He dramatically altered his arsenal in the second half, throwing far more two-seamers to righties and effectively scrapping the ineffective change altogether. The adjustment in approach worked to the degree that his homerun rate at least normalized and his groundball rates spiked. His strikeout rate took a big hit, but he knocked over 90 points off the OPS he allowed, and in the grand scheme of things that’s a much more significant development than the lost strikeouts.

There was some additional cause for intrigue in his newfound ability to generate contact on balls out of the zone as well. While batters weren’t swinging and missing at his pitches as frequently, they were still chasing them out of the strike zone and making a lot more contact when they did: his O-contact rate jumped over nine points. It’s a symptom of the same cause as the lack of punchouts, but there should probably have been some expected benefit to be had with all of that chasing in the form of weaker resulting contact. That didn’t happen though, as Minor gave up more line drives and saw his BABIP jump fifty points.

So there seems to be something of a potential perfect storm for a rebound here, at least in theory: iI he can muster some better luck with balls in play, continue to develop the two-seamer as a weapon against righties, and reclaim some lost whiffs with his change-up and curveball, he should have a shot to get at least some of his groove back. That’s an awful lot of “if’s,” but that last element is probably the most important of the bunch and very well could determine the rest. On the above chart we can note that over his last handful of starts in 2014 he started to lower his arm angle again, particularly with the change-ups he did throw. There’s some small sample size noise in there given that he only uncorked eight changes in the month, but the general trend suggests a pitcher that was either hurting in a different way or one who was cognizant of his mechanical issues and trying to address them by getting back down toward a more three-quarters-type release.

I’d invest cautiously if at all in Minor on draft day next spring, as shoulder issues are always scary and his struggles last year were born out of altered mechanics that suggest the injury may have lingered with him all year. But he should be pretty cheap given everything, and even if you don’t snap him up for a discount on draft day he’ll be someone to watch for April data points. Keep an eye on whether his arm migrates back towards its 2013 slot or not. If it does there’s a good chance his change-up will start fading again and he’ll be able to generate additional movement with his newfound two-seamer. If that happens and his command numbers hold there may just be a solid residual buy-low window for him in the early season. This kind of scenario, with Minor as an early-season trade option, represents the kind of value play that can help win leagues by yielding strong returns on relatively minimal investment if he does prove healthy. The “if” certainly won’t be a minor one (get it?), but the associated acquisition costs may very well shape up to make it a gamble worth taking.