Player Background
Romo has served as the Giants closer in some capacity in each of the past three seasons. He owns a combined 2.38 ERA over 283 2/3 innings since the beginning of 2010, so fantasy owners have grown to expect dominance. The nasty frisbee-like slider, low arm slot, and above-average control combine to bring sterling results. The right-hander is a prime example of a low-velocity reliever who cruises because he does something special, and while a triple-digit fastball affords a reliever plenty of wiggle room on the mound, success at the major-league level is about consistency and having something special in the arsenal. And Romo hasn’t posted a whiff rate under 20 percent on his slider since before the 2010 season. It’s money. It’s why he has the 12th-best ERA among relievers who have thrown at least 200 innings since 2010.

What Went Wrong in 2014?
The first half of the season.

While the majority of damage came in the month of June (9.72 ERA), Romo displayed gaps in his armor throughout the first three months. At 31 years old, he has literally made a living off his slider. The fastball and changeup serve their respective purposes, but his repertoire has always been crafted around his breaking ball. And for the first few months, much of the baseball world wondered where it went.

The overall trend isn’t difficult to spot. Beginning in July, Romo’s slider began to be the swing-and-miss pitch that we’ve gotten to know, but before that, it was pedestrian. Perhaps coincidentally, the right-hander also tried incorporating a changeup into his pitch selection much more often. He featured it over 10 percent of the time before the month of July, when he clearly scrapped it and returned to a pure fastball-slider combination.

As one would expect due to the friendly confines of AT&T Park, Romo fared much better at home than he did on the road. He posted a 2.97 ERA and 33.6 percent strikeout rate at home, but a 4.55 ERA and 18.0 percent strikeout rate in road games. His home-run rate also jumped to 1.95 HR/9 on the road. That even includes the three blown saves in June, which all came at home and ultimately cost him the closer’s role.

What Went Right in 2014?
At the risk of making things too simplistic, what went right was Romo severely curtailing the usage of his changeup in July, and the return of his slider. He held opposing hitters to a .189 batting average and his strikeout rate climbed to 29.9 percent. His walk rate dropped to a mere 3.9 percent, and Sergio Romo was the dominant Sergio Romo that we’ve come to know over the past half-decade.

More directly, though, the seven-year veteran stopped messing around in the strike zone after the month of June. He turned to his fastball-slider combination and worked to his strengths.

Here is his strike zone heat map from opening day through the end of June: 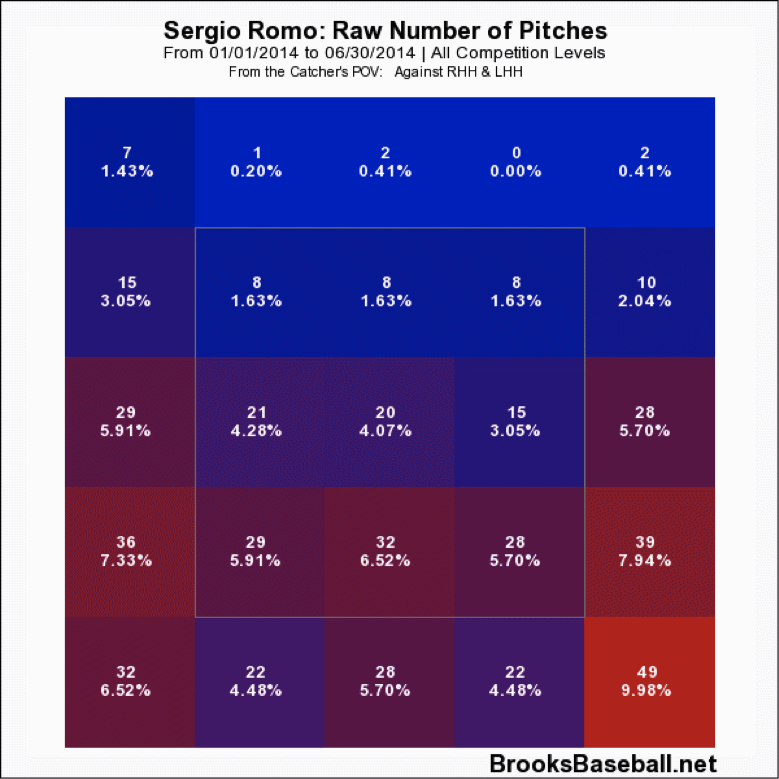 Here it is from July 1st until today: 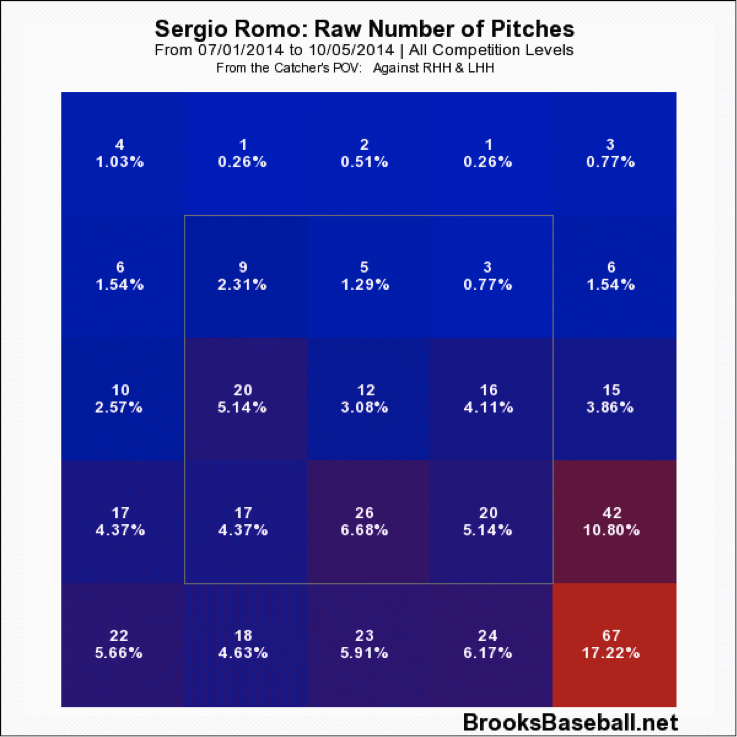 Starting in the beginning of July, Romo abandoned his changeup and reverted back to what makes him special on the mound. He leaned on his slider and wore out the glove-side part of the plate, burying his slider where neither lefties nor righties could hit it with regularity.

What to Expect in 2015?
The ultimate concern surrounding Romo has to do with location. He will be a free agent following the 2014 season. If he returns to San Francisco, it’s unlikely that he’ll inherit the closer’s role. Santiago Casilla posted a 1.70 ERA with 19 saves, and he’s not a free agent until 2016. That avenue is blocked. His fantasy value is rather limited in San Francisco, outside of deep NL-only leagues and holds leagues.

If Romo inks a deal with another team and returns to the closer’s role, though, his fantasy value skyrockets once more. The early-season stumbles can be ascribed to a failed experiment in many ways with the changeup. He dominated in the second half and showcased his skills to 29 other big-league clubs. The slider-specialist will likely be in high demand. Fantasy owners should hope he signs with a club that needs a shutdown option in the ninth inning.

Some may point to the poor performance on the road as a reason to shy away from the right-hander, but I think that would be foolish. The home/road splits certainly favored AT&T Park; however, for his career Romo owns a 2.45 ERA at home and a 2.57 ERA on the road. Historically, it hasn’t been an issue. I don’t suspect it suddenly will be.

The Great Beyond
His long-term outlook remains cloudy. It remains highly dependent on his eventual destination this winter. If he’s a closer, his long-term outlook is much rosier than if he joins a club in a set-up role. That should be obvious to fantasy owners at this point. Not much more can be said on that front.

On the other hand, Romo will turn 32 years old next season, so age is quickly becoming an issue. Especially for a slider-specialist who doesn’t have velocity on which he can fall back. It’s the slider or nothing. Furthermore, one has to wonder how much stress the heavy reliance on breaking balls has placed on his elbow. Projecting future injury is difficult and largely a waste of time, but it’s something of which to be cognizant. Slider-heavy pitchers profile as having a higher risk. However, every single pitcher appears to be a risk these days, so it’s unclear whether a slider-heavy pitcher is any riskier than other pitchers.

As a fantasy owner, I wouldn’t put too much stock in injury concerns. My lasting concerns surround his future role and his aging profile. That’s about it. I feel confident in my expectations that Romo will return to his dominant form next year, and his early-season performance will fade into the background and largely be forgotten.

You need to be logged in to comment. Login or Subscribe
tmangell
Great analysis - as a Romo fan, I thought this article was spot on. The amount of his new contract totally hinges on whether his new team sees him as a closer or a shut-down set-up guy.
Reply to tmangell