The Holy Trinity is nothing new ‘round these parts. Bret Sayre discussed the concept and gave it its moniker last season, and I brought it up once again in my first piece at Baseball Prospectus. For those who are unfamiliar with The Holy Trinity, though, it’s pretty simple. As fantasy owners, we like pitchers who can either strike guys out, limit walks, or generate copious amounts of ground balls. But we love pitchers who can do all three. Thus, The Holy Trinity occurs when a pitcher posts better-than-average strikeout, walk, and ground-ball rates.

In short, they’re generally the guys to covet in fantasy leagues. They tend to be the anchors for your starting rotation, as they can provide above-average production in all categories. We’re not talking about someone like Francisco Liriano, who will rack up the strikeouts but drag down the WHIP category. These are guys like King Felix who provide value in strikeouts, wins, ERA, and WHIP.

Before making a few specific comments, let’s paint the landscape. Here are the pitchers (min. 100 IP in 2014) who have qualified for The Holy Trinity:

In total, 19 pitchers made the cut with roughly a week remaining in the season. To illustrate the point regarding their elite status, consider these two points: (1) the average ERA on this list is 2.89, and (2) the league-average ERA for starting pitchers this year is 3.84. Thus, using a one-year sample size—which is admittedly not ideal and isn’t even taking into consideration the differing innings totals for each player—we can see that netting a pitcher from The Holy Trinity list is good for roughly a run improvement on the league-average starter.

I find the overall list fascinating. There are so many things that could be discussed, such as the fact that the Dodgers have three pitchers on the list. Anibal Sanchez is also the oft-forgotten man behind David Price, Max Scherzer, and Justin Verlander—none of whom make this list. We could also wade into the deep end and explore the fact that the best starting rotation in baseball, the Washington Nationals, only have one pitcher on the list, which perhaps speaks to the limitations of The Holy Trinity in being the end all, be all.

Alex Wood grown in popularity over the course of the season, but he’s still tiptoeing under-the-radar for some fantasy owners. He’s been a top-30 starter this year—and been a top-15 starter in the last 30 days—but is still only owned in 97.0 percent of ESPN leagues. That’s crazy. If it weren’t for the midseason stint in the bullpen to limit his overall workload, he’d perhaps be a 15-plus-game winner and be pushing to become a top-15 starter.

One of the primary concerns with Wood has always been his unorthodox delivery. Some have expressed doubt about him consistently shouldering a 200-inning workload because of it, which remains unclear, but the other criticism has centered on his ability to retire right-handed hitters. After all, pitchers with low armslots can show the ball early to opposite-handed batters and get crushed; however, Wood has performed well against both lefties and righties. He owns a 3.92 K:BB ratio against lefties compared to a 3.77 K:BB against righties. Lefties have hit .244/.305/.344 off of him, while righties have hit .230/.288/.356.

The success against righties has stemmed from his curveball. They’re only hitting .175 with five extra-base hits against his curveball this season. It’s given him a put-away pitch against opposite-handed pitching, which is a huge plus for any starter, much less a starting pitcher with a low armslot.

And then there’s Brandon McCarthy, who frustrated many fantasy owners throughout the first half of the season. His peripherals were fantastic and his velocity had increased significantly, but the positive results did not follow. That is, until he was traded to the New York Yankees in early July. Since that point, he’s dominated, posting a 2.54 ERA over 85 innings, while maintaining an increased strikeout rate (21.6 percent).

Last month, McCarthy said the Diamondbacks urged him to limit his pitch selection, which caused him to throw his cutter less often and become “sinker happy.” The Yankees have encouraged him to utilize his entire repertoire, which is illustrated in this graph: 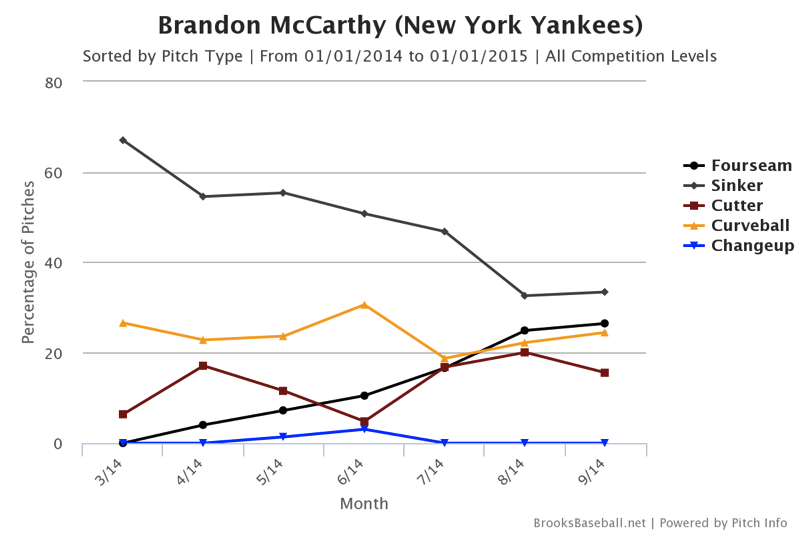 As you can clearly glean from the graphic, McCarthy has begun throwing his sinker far less often and has turned to his cutter and four-seam fastball to a greater degree. It’s perhaps simplistic to believe his drastic turnaround is explainable by only a change in pitch selection. After all, he fell victim to a .345 BABIP in Arizona and has seen that number drop to .294 in New York. I’d argue that decline could partially be due to the change in repertoire, as it has likely led to less hard contact; however, I’m sure a 50-point swing also has some random variance in there.

Overall, it’s not groundbreaking to assert that pitchers who strike people out, avoid walks, and generate groundballs are very good pitchers. That’s expected. Still, it’s instructive to determine which pitchers actually make the cut and are producing The Holy Trinity this year. As a fantasy owner, perhaps guys like Jose Quintana, Marcus Stroman, or Carlos Carrasco get a bit of a bump on your draft board. Maybe people won’t believe Brandon McCarthy’s second-half success is sustainable and will be afraid that he’ll revert to the form he had in Arizona. You’ll know better.

As a parting shot, I’d also like to note that Carlos Villanueva—former Brewer—has a 20.9 percent strikeout rate, 5.7 percent walk rate, and 44.9 percent ground-ball rate. That’s the Holy Trinity, man. Embrace it. Believe it. Er, don’t believe it. It’s not real. It doesn’t matter much, at least. The mustache matters, though, and it’s luxurious.

You need to be logged in to comment. Login or Subscribe
username49
Nice to see some Indians near the top of that list. We could have quite the rotation for the next 4+ years with Kluber, Carrasco, Bauer, and Salazar. I don't expect Bauer to be a holy trinity guy, but if Salazar can refine his slider or add some movement to his fastball he may be able to keep the ball on the ground more frequently and join this list next year.
Reply to username49
boatman44
Quintana is SO under the radar , due to wins (yuck), and will be again next year.I read something recently that said that the only two pitchers that the White Sox would not consider trading where Sale and Quintana at any price.His QS in a hitters park is outstanding, enough said.
Reply to boatman44