If someone had asked you back in April to guess the pitchers with the five best ERAs entering September, odds are you’d do pretty well. Clayton Kershaw is a given, as is Felix Hernandez. Chris Sale is as near a lock as there is, and Johnny Cueto wouldn’t have been too far down the list. You wouldn’t have been crazy to throw Yu Darvish or Adam Wainwright in there, but you would be wrong. No one would have foreseen Danny Duffy in the top five.

For good reason, too. After undergoing Tommy John surgery in 2012, Duffy missed most of the following two seasons. He has totaled nearly double the innings in 2014 that he threw in 2012-13 combined, and he’s been far more effective in doing so. It’s not that Duffy was bad in that span, posting a 3.90 ERA (3.96 FIP) in 2012 and a 1.85 ERA (3.09 FIP) in 2013. Since returning though, he’s been a different pitcher. He’s striking out fewer batters and walking significantly fewer batters, and it’s set up a model of sustainable success for him, even if it’s robbed him of some of his fantasy ceiling.

R.J. Anderson already highlighted the impact that James Shields has had on Duffy (temperament section), and it’s something that’s been backed up by reports out of Kansas City all year. While we often work with numbers in the fantasy realm, it cannot be overstated how much a different mental approach (not falling apart with runners on base) has aided Duffy in 2014, and it’s borne out in said numbers, as his left-on-base percentage has dropped from 85.3 percent to 76.2 percent.

Part of the reason for the change in results, is a change in approach. While Duffy has seen parts of five seasons in the big leagues, with varying usage levels on his pitches, 2014 represents one of the larger samples to date. This year, he’s gone away from his fastball a bit (61-plus percent from 2010-12, 58.5 percent in 2014), and supplemented it with increased usage of his sinker, and breaking ball. While pitchf/x categorizes some of his breaking balls as sliders, Duffy’s grip is more in line with a curveball, though he clearly shows some feel for manipulation. If we total up what Brooks Baseball terms his curveball and slider, we can see he’s using his breaking ball more than ever before (slightly edging 2011).

There’s also the marked reduction in how often he’ll go to the changeup. It’s not a bad pitch, flashing depth and some slight drop, but it often arrives firm, without movement and lacking enough separation from the fastball. That Duffy has been willing to backfoot his breaking ball to right-handed hitters has allowed him to avoid throwing the worst pitch in his arsenal, and he’s seeing better results because of it. Duffy has been much more consistent in his ability to get strikes with his “slider” to right-handed batters, while also throwing the pitch significantly more often (illustrated below the quote). Overall, we’ve seen a two percent increase in breaking ball usage from 2014 compared to 2011-13:

All of this is to say that while Duffy has always had the ability to pitch in the middle of a rotation, he’s truly earning it at this point thanks to a change in approach and a willingness to trust his stuff. Buster Olney recently profiled Duffy ($), highlighting his recovery from Tommy John surgery, and how it helped him grow as a pitcher:

“When Duffy returned after missing almost all of the 2012 and 2013 seasons, he and pitching coach Dave Eiland worked on shaving off the unnecessary movement in his delivery, streamlining his mechanics, from when he takes the sign and raises his hands to the instant the ball leaves his hand. This gives him a better chance to throw strikes, and repeat his delivery.

Only five MLB pitchers have thrown a higher percentage of fastballs than Duffy this season, and he’s been able to locate that pitch in a manner that he couldn’t before his surgery. In 2011, he averaged a whopping 18.6 pitches per inning, and in his first outings in 2012, that climbed to 19 pitches per inning.”

While the numbers don’t bear out Olney’s statements directly (strike rates are lower on the fastball), it doesn’t mean he’s wrong. Duffy’s ball rates are down too, and his swing rates on the fastball and the sinker have increased by eight percent each. Instead of missing the zone by a foot, he’s missing by inches, and getting weak contact or foul balls. That would explain the meager .196 batting average that hitters have mustered off of Duffy’s fastball. 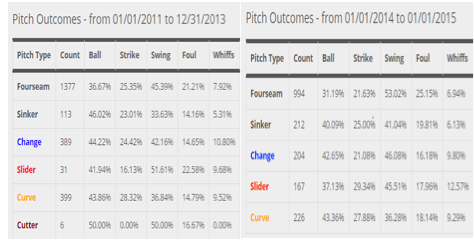 Duffy isn’t as good as his current 2.42 ERA says he is, despite implementing multiple improvements. Not with a strikeout rate circa league average and a walk rate slightly above. He’s still a good pitcher, though, with room to grow, and more importantly, a willingness to take instruction in order to do so. He was always a regression candidate, and that remains the case—but what he’s done is make his surface stats far more sustainable than they ever were before. Duffy might not be what his ERA purports him to be, but he’ll be more than adequate going forward, and he slots in well as a third or fourth starter in a fantasy rotation.

You need to be logged in to comment. Login or Subscribe
TeamPineTar
If Duffy was stranding 85.3% but is now stranding only 76.2% of his baserunners, that should not be an improvement, right? So are the numbers switched, or is the statement just wrong?
Reply to TeamPineTar
TheArtfulDodger
It is wrong in a few spots, thanks for saying something. I am implying the inverse when what I meant to do was highlight he 85% as an anamoly due to SSS, but compare his current rate to the last time he had a decent sample (2011). That year he was at 70% strand rate, to which 76% would be a clear improvement.

Sorry about that very misleading mistake.
Reply to TheArtfulDodger