Stop getting excited about Jeremy Hellickson. All four of you. If we haven’t learned that we shouldn’t judge anything based off of four starts or 20-plus innings, we sure as hell should have. So let’s not declare him “back to the old Hellickson,” or make any other bold proclamations here. Let’s just take a look at what he’s done over 20 brief innings, and see if he’s doing anything different. If he is, perhaps you can get in on the ground floor of his value, after a rough 2013.

With his strikeout and walk rates in the same vicinity of his career totals, let’s start with his velocity, per Brooks Baseball:

Everything looks to be about the same. It is worth noting the lack of a cutter for Hellickson, a change compared to the 2013-14 season, except:

Dammit. He barely used the cutter last year, and at seven percent, the pitch wasn’t a major factor for him, even at its highest usage point. Instead of showing you a massive amount of charts though, what I’m going to tell you is this:

The biggest difference in Hellickson’s profile is the extreme number of fly balls he’s generating. Never a ground-ball pitcher (career high of 41.8 percent in 2012), Hellickson is burning worms only 27.7 percent of the time. Compare this to the league average of 45.2 percent, and we can note a few things. First, this is likely an aberration based on the small sample of innings Hellickson has thrown (20.2). Second, while ground ball rates stabilize at about 70 balls in play, and Hellickson has likely surpassed that, there’s little chance that this is sustainable based on the lack of change in movement on his pitches compared with previous years, and the much larger sample of results they have produced. Lastly, his BABIP is back to being well below league average, but then, that stabilizes at 2,000 balls in play, so we’re clearly nowhere close to know if that’s real or not.

The next place we’d want to check when trying to figure out “why so few ground balls?” is where he’s throwing all these pitches. If he’s suddenly pounding the upper third of the zone more than ever before, it would be fair to assume that’s why the lack of grounders. On the left is 2014 and on the right is 2013: 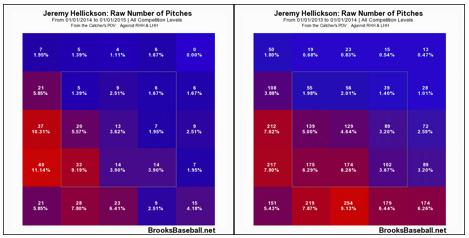 So yes, it does seem as though Hellickson is working the upper part of the zone a bit more, as well as really pounding the inside part of the plate against right-handed batters. Add to these additional fly balls a career low HR/FB rate, a 91.4 percent left-on-base percentage and the reasons for his preliminary success start to become apparent.

This isn’t to say that Hellickson can’t continue to beat the odds, as he did in 2011-12, when his ERA significant outpaced his FIP. He’s certainly shown the ability to do it before. But if his LOB rate drops to his career average (a difference of 14 percentage points), or his HR/FB rate returned to his career average (two percentage points), we’re going to see those superficial numbers take a turn for the worse. Despite his disdain for the ground ball, Hellickson might look into generating a few more, so that when the course correction comes on his HR/FB, he won’t be giving up as many fly balls.

Still, it looks like nothing too out of the ordinary for Hellickson. While there are a few anomalies, they appear to be the result of variance more than a process change at this point. If they’re able to sustain themselves over several more starts though, perhaps then we can identify something different.

You need to be logged in to comment. Login or Subscribe
davejsch
Negative results are still results worth knowing. All articles don't have to point to a significant change in style/profile for the information to be worthwhile.

"While there are a few anomalies, they appear to be the result of variance more than a process change at this point."
Reply to davejsch
TheArtfulDodger
I hope it doesn't seem I said otherwise. Not finding something is as useful as finding something at times, but I do think in this case the sample is small enough that it doesn't necessarily eliminate things. I think he'll trend backwards towards his career averages, but it's possible that what he is doing holds, and at that point we can re-assess and see if something truly has changed.
Reply to TheArtfulDodger
evergreen
Given the small sample, would it make sense to look at the fly-ball/ground-ball tendencies of the batters he's faced? I know there is significant team-to-team variation.

His last game (4 GB, 16 FB, 6 LD according to B-R, his most extreme start) was against the A's, whose hitters have a well-known FB tendency.
Reply to evergreen
TheArtfulDodger
I think that's a great point and would certainly skew any numbers given that small sample. Thanks for the added info!
Reply to TheArtfulDodger