It’s no secret that Francisco Liriano remains one of the more electric arms in baseball. He still has a lively fastball, as well as a devastating slider-changeup combination that can induce a myriad of swings-and-misses. When he throws strikes consistently and stays healthy, he can be dominant. Last year, he missed a few starts and only threw 161 innings, but he decimated the NL Central with a 3.02 ERA (2.92 FIP) and struck out more than a batter per inning. Ultimately, he was a top-30 starter and a wonderful surprise in all formats.

Fantasy owners remained skittish when drafting Liriano this spring. His average draft position didn’t reflect his 2013 performance, as owners worried about his health and whether he had truly discovered something that would lead to consistent, reliable performance on the mound.

Almost four months into the 2014 season, it seems those fears were wholly justified. Liriano has seen his walk rate jump to 12.1 percent, which ranks sixth among pitchers with at least 50 innings. He owns a 4.18 ERA (4.06 FIP) and is currently the 140th-ranked starting pitcher in ESPN leagues. You know how it goes with Liriano, though. The stuff is titillating. Fantasy owners (and big-league teams) will always have the “what if he figures it out for a stretch?” question in the backs of their minds.

We will do our best to determine if Liriano makes sense to grab as a high-risk upside play. This is inspired by BP subscriber, Masshole—which isn’t exactly a term that I thought I’d utilize in this space. Maybe it’s a term of endearment in the Northeast? I’m unsure. I’m nothing but a lowly Midwesterner who lacks culture.

That’s what I want to do in this space, though. I want to take your suggestions from the comments section or on Twitter (@JP_Breen), so if you want to see a particular player get the TBG treatment, be sure to drop a line.

Anyway, Francisco Liriano. Let’s do this.

I’m going to preface this article by acknowledging that projecting Francisco Liriano’s future performance is a bit of a coin flip. If you’re a fantasy owner who desires high-risk, high-reward players, perhaps it just makes sense to grab Liriano on the cheap and hope the performance recovers. However, let’s attempt to determine if there’s anything in the numbers that hint a breakout could be in the hurler’s near future.

Again, the raw stuff isn’t a problem for Liriano. He’s still generating swings-and-misses better than almost anyone in Major League Baseball. Here are the league leaders in swinging-strike percentage amongst starters (min. 50 IP):

Two of those pitchers, Tanaka and Fernandez, are on the disabled list with elbow injuries, while Kershaw and Ross have been top-15 starters. And really, both Tanaka and Fernandez were elite before succumbing to their injuries. The next five starters in terms of swinging-strike percentage: Chris Sale, Felix Hernandez, Ervin Santana, Stephen Strasburg, and Gio Gonzalez. Thus, if we oversimplify the analysis, guys with high swinging-strike rates are guys you want to own in fantasy leagues—even just for the plethora of strikeouts.

The difference is that Liriano has been so bad in other areas that he’s been borderline unownable in leagues, and in many shallower leagues, he’s freely available on the waiver wire. He’s only owned in 27.8 percent of ESPN leagues. What’s going on?

I’m interested in the increased walk rate because the overall pitch profile within the strike zone hasn’t changed. Last season, he had 34.83 percent of pitches in the zone and 65.17 percent of pitches outside the zone. Those numbers are 34.44 percent and 65.56 percent, respectively. Thus, in terms of raw pitch totals, he’s not throwing more pitches outside the strike zone, but the walk rate has increased by a significant amount.

Though the percentage of pitches outside the zone may not have changed, opposing hitters aren’t swinging at those pitches as often. That’s perhaps the main reason why Liriano is walking more hitters. The stuff hasn’t really changed. The velocity is relatively consistent, the pitch usage is largely the same, and the ground-ball percentage is even better than last year. But, if we look at the swing profile, we see some movement this year. 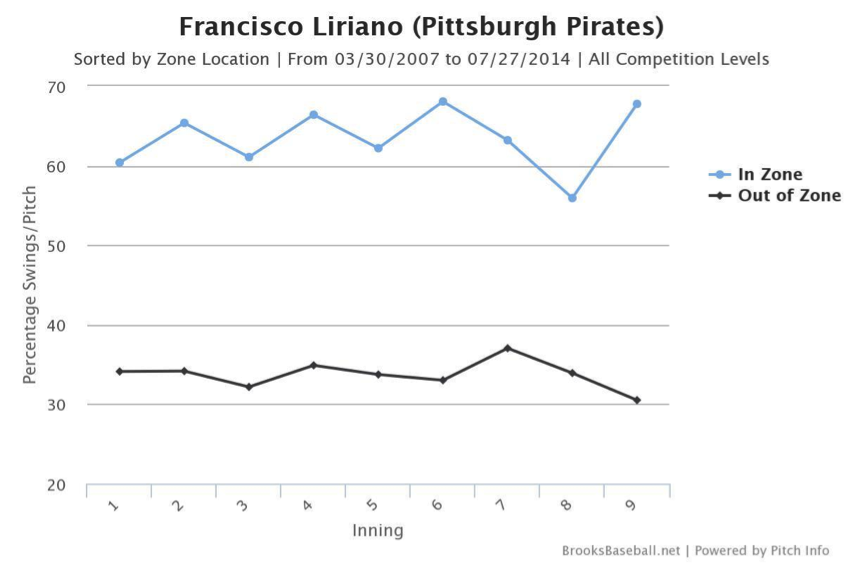 The large data range makes the differences look minuscule on the graph above, but we see two big jumps. Opposing hitters only swung at 55.91 percent of pitches in the zone last year against Liriano. That number has increased to 67.74 percent this season. Similarly, the 30.51 percent swing rate on pitches outside the zone is a career-low by a significant margin.

We also see the whiff percentage on pitches outside the zone is only 10.17 percent, which is a career low by two percent. All of this means that Liriano is throwing pitches out of the zone as much as he has in previous years, but he’s inducing fewer swings and getting fewer whiffs. That, in my estimation, is the real reason we’ve seen the jump in walk rate this season. I wondered if Liriano was beginning more counts 1-0 than he has in previous years; however, the first-pitch strike percentage is only down two percent. That doesn’t seem meaningful enough to assume he’s merely throwing more pitches out of the zone early. I think it’s more well-rounded than that.

Some owners may think the tides are turning, though. He has a 2.25 ERA in the month of July and is holding opposing hitters to a .175 batting average. However, he’s still walking 15.9 percent of batters this month and is benefiting from a .225 BABIP, which is really helping him limit the overall damage. The underlying issue hasn’t changed.

Similarly, people have pointed to Liriano’s issues against lefties this year, which is unusual. Lefties are hitting .292/.370/.472 against the southpaw, but that’s largely driven by a .375 BABIP. He’s striking out a higher percentage of lefties than righties, as well as walking a lower percentage and generating more grounders. To me, it really comes down to nothing more than random variance against the lefties, and an improvement there would help bring the overall numbers down a bit. I’m just not sure that would be enough to make people want to leverage assets to acquire him. After all, he still has a 1.38 WHIP against righties, which is what Jeremy Guthrie is rocking overall.

The issue seems to be the control and the walks. If Liriano can pound the zone and limit the free passes, he could return to fantasy relevance in all leagues. However, there doesn’t seem to be anything that suggests the control will improve. His percentage of pitches outside the zone has only increased in June and July. But, as referenced earlier, it’s a bit of a crapshoot. If the light bulb turns on for Liriano, he has the potential to dominate for a stretch. However, we generally want to see a sign of things turning around before investing in a player and not just rely on either hope or a gut feeling.

Buyer’s Advice: SELL
Buying is just not something I can comfortably advocate for fantasy owners at the moment. There doesn’t seem to be anything to suggest Liriano can offer anything more than strikeouts at the moment, but even then, owners will be sacrificing WHIP, ERA and probably wins. Add in the inherent injury risk for Liriano, and I can only slap a “sell” tag on the player. Granted, we said something similar before the 2013 season and he was largely a monster. Pitchers like this can make you look stupid. Admittedly, I’m just comfortable looking stupid for “missing” on a player when nothing in his profile suggests a breakout is on the horizon.