I wrote about the fantasy angle on the Huston Street trade here. There are a few ancillary angles we can talk about regarding the Padres bullpen, however, as they are left with Joaquin Benoit, Dale Thayer, Kevin Quackenbush, and someone I figured would make a run at the job in Alex Torres. Thayer and Quackenbush are clearly in front of the erratic Torres. I’ve long thought Torres had closer stuff but not closer command. It’s holding true to this point.

Romo is not fixed.

No. No he is not. He’s rocking a 5.26 ERA and hasn’t had a good stretch of outings since May 18. It’s not looking too good for Romo here in the stretch run. If you’re still holding out hope that he corrects it, I would start moving on.

Detroit Tigers
They know. They have to know. Joe Nathan was messing around with some mechanical changes before the break, and it was working out okay, but it’s clear that he’s just not the same guy he was in 2013. The strikeouts are down, the walks are up, and he’s getting hit more often. The Tigers could go back to Joba Chamberlain who’s been on a roll since blowing a save in spectacular fashion on June 8. I honestly think the Tigers might be looking for an external solution.

Chicago White Sox
Zach Putnam is having a nice run here and might end up being the closer in the interim while Matt Lindstrom and Nate Jones are on the shelf and the Sox bullpen struggles with consistency. Putnam has command and he misses enough bats. I’m not in love with him in the ninth, but considering the other options, he’ll do.

St. Louis Cardinals
Trevor Rosenthal gave up a ninth-inning run against the Dodgers to give them the lead on Sunday night. He’s had an up and down season so far, but I think he’s the type of guy who stabilizes as he continues to learn at the major league level. I still believe.

Philadelphia Phillies
I whiffed on Ken Giles twice: once as a prospect and once in this column’s graphic. The comments section rightfully called me out on it. It will be rectified in this week’s graphic.

Tampa Bay Rays
Craig Goldstein and I finally dropped Grant Balfour from our lineup in TDGX, which is a 20-team dynasty league. We were likely the last fantasy team to do so.

Colorado Rockies
I saw the LaTroy Hawkins Closer Experience in Chicago years ago. It wasn’t a good time then. I still have no idea why it’s working out now. But it is. 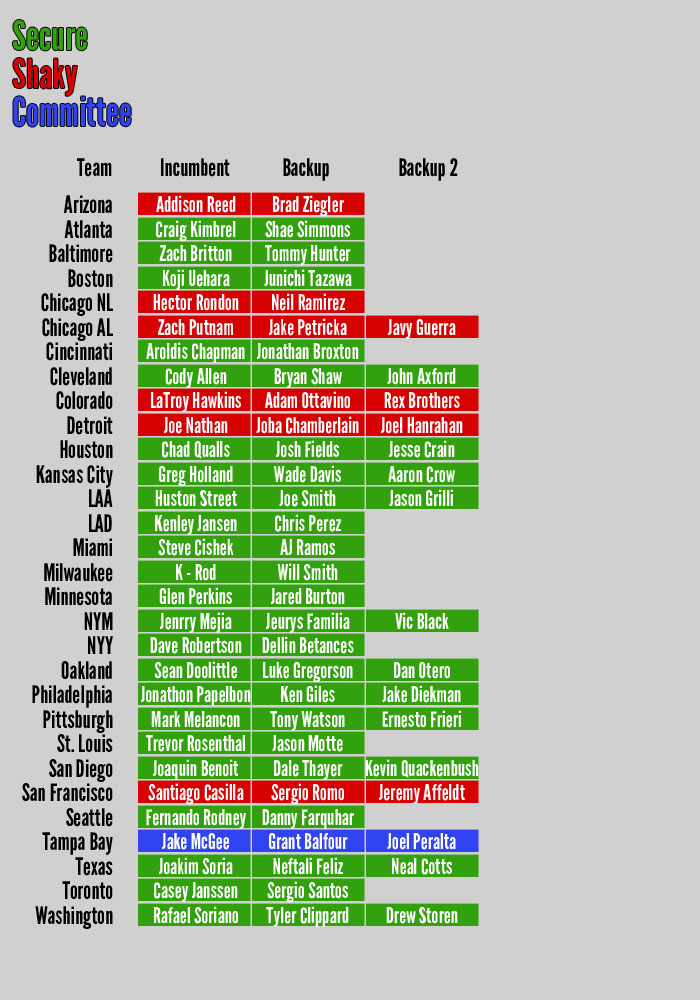 You need to be logged in to comment. Login or Subscribe
kvamlnk
"this weekâ€™s graphic": I don't see it.
Reply to kvamlnk
MRubio52
It is submitted and will be up shortly
Reply to MRubio52
tballgame
Nothing of note happening in Halo land this week?
Reply to tballgame
MRubio52
It was written up in the Transaction Report linked in the first paragraph.
Reply to MRubio52
mgolden
Aaron Loup is more likely to replace or rescue Janssen in Toronto. Santos is perhaps the least probable choice at the moment.
Reply to mgolden
earlweaver
Could you please discuss the Texas situation if Soria get traded...(I mean discuss it now, not after he's traded)....Feliz might not be the guy...Who then?...Cotts? Tolleson?...What about Bowen, who is getting chances ar Round Rock?..


Reply to earlweaver
MRubio52
I'd go Cotts then Tolleson. My rule with closer candidates is that they aren't a candidate in the minors with rare exceptions.
Reply to MRubio52
earlweaver
Thanks
Reply to earlweaver
Hellgrammite
Be interested to see how many of these closers can maintain their jobs till next year. Such a volatile roll though some good performances this year. Here are three guys I am would be looking to grab for ROY and next year as possible top 10 closers that officially nabbed the job this year.

Doolittle a surprise, could be the closer through 2015 with his fastball.

Cody Allen looks like he is only getting better.

Rosenthal has immense upside. Pitching three days in a row seems not to sit well with him though. Has had to that a few times this year and it doesn't end well for him.
Reply to Hellgrammite
sldetckl16
Cody Allen and Trevor Rosenthal will be keepers in my 14 team H2H points league for me next year. I certainly believe in top 5 upside for both and that they will be the most dominant pairing in my league.
Reply to sldetckl16
MRubio52
I would agree here as well. I really like Allen long term.
Reply to MRubio52
TeamPineTar
Jake McGee has six saves in July, and that would be in 16 game days considering the break. I hardly think that qualifies as a "committee," especially with Ball Four in there, whom you make the point that you and Goldstein have jettisoned. Always look forward to this column. What a challenge!

Reply to TeamPineTar
MRubio52
Yeah that's a good point, I hate predicting Maddon moves. Thanks for the words.
Reply to MRubio52
Nacho999
Lookout for Josh Fields in Houston...I don't really understand the need for Texas to move Joakim Soria (he could serve them very well as closer in 2015 too at a reasonable number...Although, as his owner, I can't remember this last Save Opp), but Houston should move Qualls...His value will never be higher and the youth movement is underway in Houston...
Reply to Nacho999
MRubio52
Agree on Qualls, I think it'll be interesting to see what they do at the deadline with their relief corps. Jesse Crain's glacial recovery hurts as well.
Reply to MRubio52
MRubio52
Sorry folks, had a rather unexpected death at my other blog, I'll address these questions now.
Reply to MRubio52