Prior to the season, the upper fantasy echelon of the second base position appeared to be a rather precarious investment. Robinson Cano inked a mega-contract with Seattle, which made many fantasy owners nervous that his power numbers would spiral down the drain. Dustin Pedroia saw his power production drop precipitously in 2013 and had finally found himself on the wrong side of 30. Ian Kinsler compiled rather pedestrian (for him) numbers a year ago and was transitioning that performance to a more pitcher-friendly environment in Detroit.

The traditional fantasy stalwarts at second base were vulnerable. It seemed a changing of the guard could occur and other guys could step into the limelight—and in some ways, that’s exactly what has happened with Dee Gordon, Jose Altuve, and Anthony Rendon asserting their fantasy dominance in the first half of the 2014 season. After the season, perhaps we must re-evaluate who can now be labeled as “elite” at the position.

However, Jason Kipnis wasn’t supposed to be one of the question marks. He was the second-ranked second baseman in 2013, and he appeared poised to lead the future elite group of middle infielders. After all, the young man entered the 2014 season at only 27 years old, the start of his assumed prime. The power/speed combination had long enticed fantasy owners, but in 2013, he finally posted a .284 batting average. For some, that was the last-remaining concern about Kipnis and his fantasy profile. If he could offer 20 homers and 30 stolen bases without a poor batting average, he’d be golden—and that’s exactly what he flashed in 2013. Many people, including myself, expected those trends to bleed into the 2014 season.

What the hell happened? At the All-Star Break, Kipnis had barely wedged his way into the top-20 second basemen, ranking 18th behind uninspiring guys like Omar Infante, DJ LeMahieu, and Josh Harrison. After a couple nice days over the weekend, he vaulted to 14th, which is still well below expectations. I received an email from Scott in New York this week, asking if he should throw in the towel on Kipnis and look elsewhere for better overall production. Good news: that’s exactly the sort of question we answer every Monday in this space.

(Side note: If you have specific players you’d like featured in The Buyer’s Guide column next week, leave your requests in the comments section or shout it to me on Twitter, @JP_Breen. Perhaps you’ll get a brief 30 seconds of fame next week, like Scott. One can only hope, right?)

Anyway, this is The Buyer’s Guide. Let’s do this.

We’ve seen this before from Jason Kipnis. It’s just … we thought we were past this.

Some people focused on the overall BABIP increase (.291 to .345) from 2012 to 2013 as the reason his production improved so dramatically. Such an argument doesn’t fly. It’s far too simplistic. It falsely assumes the perfect randomness of BABIP. In truth, Kipnis elevated his offensive profile through figuring out left-handed pitching, which proved to be a significant hole in his game in 2012. Most of us hoped that improvement against southpaws represented a permanent change. It hasn’t.

Here are his numbers against left-handed pitching over the past three seasons:

When the data is presented as such, Kipnis’ 2013 season suddenly appears to be an anomaly, rather than the start of a permanent shift. The 27-year-old is once again flailing against southpaws and has seen his numbers take a significant hit. In contrast, he’s hitting .273/.357/.406 against righties. His overall batting average is struggling to crack the .250 mark because his performance against lefties is so dreadful.

I realize the impulse is to glance at the above chart and assume that BABIP made all the difference. Surely, there’s an element of random variance that’s coming into play, but I believe the overarching reason Kipnis has seen a decline in performance against lefties lies in his inability to make solid contact. For example, check out his historical whiff percentage against southpaws: 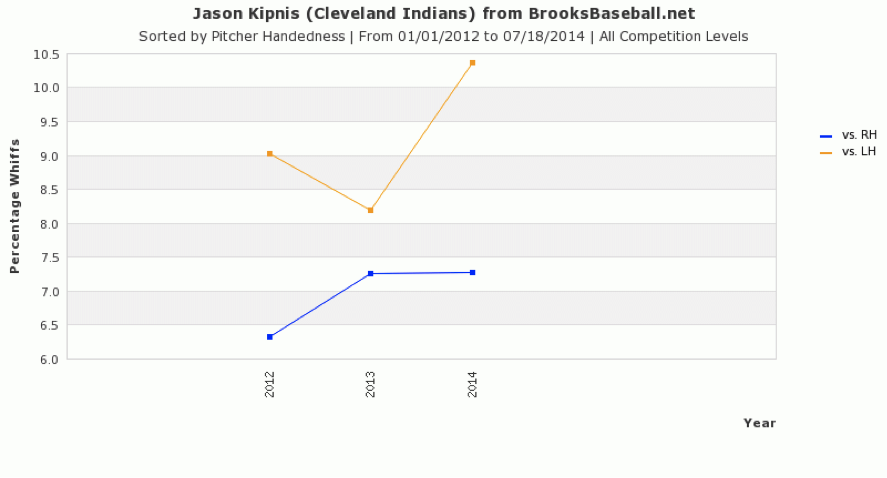 The remarkable uptick in whiff percentage against lefties this year certainly catches the eye, but it’s also important to note the improvement in 2013. I’d argue his impressive performance against lefties a year ago was both a product of random variance (or, if you prefer, luck) and a change in approach. Kipnis actually improved core skills. And when that can be paired with positive random variance, pretty wonderful things can happen on the baseball diamond.

Yeah, you read that correctly. Jason Kipnis has exactly zero extra-base hits against breaking balls from lefties this year. To be fair, he’s not the first left-handed hitter to have this problem; however, if he’s to be an elite fantasy option, he must be able to produce against both righties and lefties. Well, either that, or he must really mash right-handed pitching, and while he’s held his own against righties (.273/.357/.406), he hasn’t been anything special.

All of this brings us to another vexing question. What happened to the power production? Even if we positively acknowledge the .273 batting average and .357 on-base percentage against righties, the .406 slugging percentage still sits there, grotesquely staring back at fantasy owners. It equates to a .134 ISO, which is flat-out unacceptable of a top-tier fantasy option when its the strong side of the platoon.

So, really, that becomes the central question. I’m not sure if fantasy owners can expect his performance against lefties to improve, as significant track record exists for both sides of the argument, even if the recent trend has been negative. If he can’t turn it around against lefties, though, fantasy owners can still salvage value if the power returns. The 13 stolen bases are nice, but the power needs to return.

The injury concerns have to be addressed. He missed nearly four weeks due to an oblique strain in May, and it’s possible the injury has affected him all season, even after he returned from the disabled list. Of course, most of the injury talk is merely speculation on our part. It does, however, feel disingenuous and inaccurate to ignore.

Some evidence exists that lends credence to the injury argument. After all, even when Kipnis posted a .122 ISO in 2012, he ranked 129th out of 293 batters in average batted-ball distance. Last year, that improved to 96th out of 300 batters. Fast forward to 2014, though, and he plummets to 206th out of 269 batters. He’s surrounded by guys like Jean Segura, Matt Carpenter, Sam Fuld, and Michael Bourn. It’s not desirable company in terms of power.

It also seems to be out of the ordinary, which makes one believe that the oblique injury may be playing a factor. The batted-ball profile has changed from a year ago—mainly his ground-ball rate increasing from 43.1 percent to 47.9 percent—but it’s not different from 2012. The main difference is in the HR/FB numbers, where he’s currently sporting a 7.4 percent ratio. It’s comfortably a career low, which once again could point toward the injury issue. At the very least, it points toward the validity of the batted-ball distance data that was mentioned a couple paragraphs above.

The unfortunate part of this analysis is that I’m raising a couple concerning questions that have no easy answers. It’s unclear whether his intense struggles against lefties will continue, and it’s similarly unclear whether his oblique injury is the underlying reason for his overall power outage. Thus, in some ways, that means the confidence level in (or at least the strength of) the ultimate “buy” or “sell” label will be shaky, because to me, it remains unclear what we’re really looking at this year.

However, for fantasy owners, a couple pieces of encouraging news do exist. Kipnis is continuing to run and should be good for 25-plus stolen bases again this season. That’s extremely valuable in almost any format, and it’s important to obtain speed at the second base position where the batting average and power numbers aren’t elite. Furthermore, Kipnis has moved to the leadoff role since Michael Bourn has landed on the DL with a hamstring injury. That should be a boon for owners who are on the lookout for runs. The RBI numbers may suffer a bit in the leadoff role, but the Indians have scored the seventh-most runs in Major League Baseball. A smattering of RBI opportunities should continue to come Kipnis’ way.

I’m not banking on the improvement against lefties. It feels too much like raw hope. For me, the decision on Kipnis comes down to whether you believe the power will return. I believe it will. His decline in power goes against too much history, and if the oblique is an issue, the All-Star Break should have served as a wonderful opportunity to obtain treatment and rest. I think he could still threaten 15 homers with a solid second half, and if he can still swipe double-digit bags, a 15/25 season is still within reach. The batting average numbers and (probably) RBI numbers will hurt. At a weak position, though, a season with 10-plus homers and 20-plus stolen bases isn’t something to simply discard because it wasn’t what we expected prior to the season.

As stated multiple times, it’s a bit of a tentative buy. It’s a buy recommendation with legitimate caveats. For me, though, his stock has dropped far enough that the potential turnaround in the second half is likely worth the price. Fantasy owners shouldn’t expect a replication of his 2013 numbers in the second half—and owners in extremely shallow leagues may even reach the point where they want to sit him against tough lefties—but I do think he’s an attractive buy-low option for the stretch run of the fantasy season. Don’t go nuts to acquire the 27-year-old second baseman. Simply be willing to take advantage of the Kipnis owners who have grown impatient with his underwhelming performance in 2014.

You need to be logged in to comment. Login or Subscribe
ErikBFlom
If the author has a moment, the game works both ways: lefties could have made an adjustment against Kipnis (they are allowed to learn too) and achieved dominance. Is there any lack of evidence of that in pitch selection, location, etc?
Reply to ErikBFlom
jimmyb1799
I recognize the pitch selection could've changed, but at some point, when you've already reached nearly 2000 words, some things don't make the cut. He saw 28% breaking balls in 2013 from lefties and has seen 28% breaking balls from lefties this year. His zone profile against lefties is quite similar (w/ perhaps a tick more pitches thrown in on the inner half than last year). If anything has really changed, it's that Kipnis is swinging at only 35% of sliders this year, while he swung at 43% of sliders a year ago.

In the end, I didn't include charts on this information because it didn't seem to bring anything big to the discussion, and I had already rambled on for too long.
Reply to jimmyb1799
Dodger300
Au contraire: I find Josh Harrison to be inspiring.
Reply to Dodger300
Dodger300
Now that the season is over, Josh Harrison clearly established himself by earning an All-Star berth, finishing second in the league in batting, and accumulating 5.3 bWAR with an OPS+ of .134, while displaying mad skills whenever he was in a pickle.

Josh Harriason was a major inspiration this season!
Reply to Dodger300
aaronbailey52
Kipnis had stretch last year- 5-6 weeks of utter dominance. But the rest of the time, he was putrid. I have to disagree about buying.

Reply to aaronbailey52
anderson721
I've been offered Kipnis and Kemp for Kole Calhoun. Not really interested, but this gives me pause.
Reply to anderson721
davejsch
Calhoun is a good candidate, but may have trouble with sample size. I like Calhoun long term.
Reply to davejsch
stockhfcrx
Would you platoon Alcantara when Kipnis faces lefties?
Reply to stockhfcrx
bmmolter
Corey Dickerson or Francisco Liriano
Reply to bmmolter