Early in the season it’s easy to brush off a struggling start for one of your key players because hey, it’s early. By mid-July though (if not sooner), we need to decide whether we’re going to ship off said star for someone with less status, but potentially more production. Today, I want to look at Chris Davis and determine whether he’s due for some sort of bounce-back in the season’s final 70 or so games, or if you should dump him on someone who is willing to believe more than you.

The only time Davis hasn’t been hurting your team this season was his brief stint on the disabled list with a strained oblique at the end of April/beginning of May. Outside of that time of null production, Davis has recorded a cringe-worthy .199/.309/.391. The latter two figures are actually moderately impressive in light of the former, but it’s still been a rough ride on the whole. There aren’t a ton of anomalies in the overall profile. He’s walking more than ever before, and while his 32 percent strikeout rate is elevated compared to his recent run of success, it’s not staggeringly different from the rates he’s posted in years prior, and certainly not enough to explain the bizarre drop in production.

Where there is a large difference in the numbers is in Davis’ batting average on balls in play (BABIP). In 2014, he’s hitting .252 when he puts the ball in play compared to a career figure of .326. While a 74 point difference is dramatic, and a move toward his career norm would go a long way toward fixing multiple problems, we can’t be quite so sure that he’s not earning that dip in BABIP thanks to weak contact. When we look at the batted ball profile, it’s one that would that would seem to support some regression towards Davis’ career norms in BABIP, as he’s actually reduced his fly ball rate (fly balls are less likely to fall for a hit than ground balls) and increased both his ground ball and line drive rates. Line drive rates are notoriously sketchy, as they are hand-marked and perception can vary from person to person, but at 26 percent, we can safely say Davis isn’t experiencing the low line drive rate we’d expect from someone generating weak contact.

The one stat that might clue us in to weaker contact though, is HR/FB percentage. Davis’ has dipped in 2014 compared to his recent seasons.

While it’s fair to question whether a close to 30 percent HR/FB rate was sustainable, this big a dip suggests that perhaps Davis isn’t making the same type of contact, especially when combined with the significant drop in Isolated Power from .348 in 2013 and .231 in 2012 all the way down to .192 this season.

So we know that Davis has experienced some “bad luck” but that he’s at least in part earning it through some weak contact. That probably doesn’t explain all of it though, so some regression can be expected. Let’s go back to that strikeout rate for a minute though. I brushed it off a little earlier, but instead of ignoring a small bump in whiff rate because it wouldn’t explain the lack of production, perhaps looking at where Davis is missing can fill some things in for us. 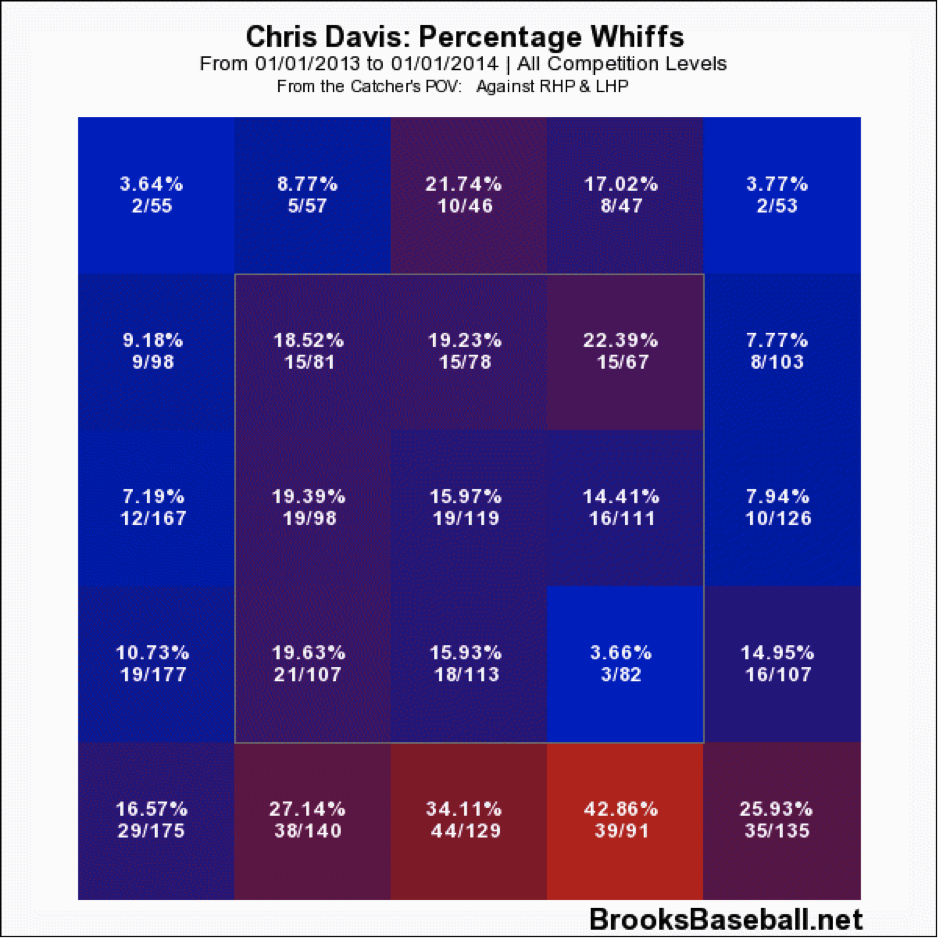 Here’s Davis’ zone chart by whiff rate from 2013, thanks to Brooks Baseball. Davis had a nice season, but has serious swing-and-miss to his game, so the elevated strikeout rates are no surprise. Let’s look at 2014 to find out what’s different. 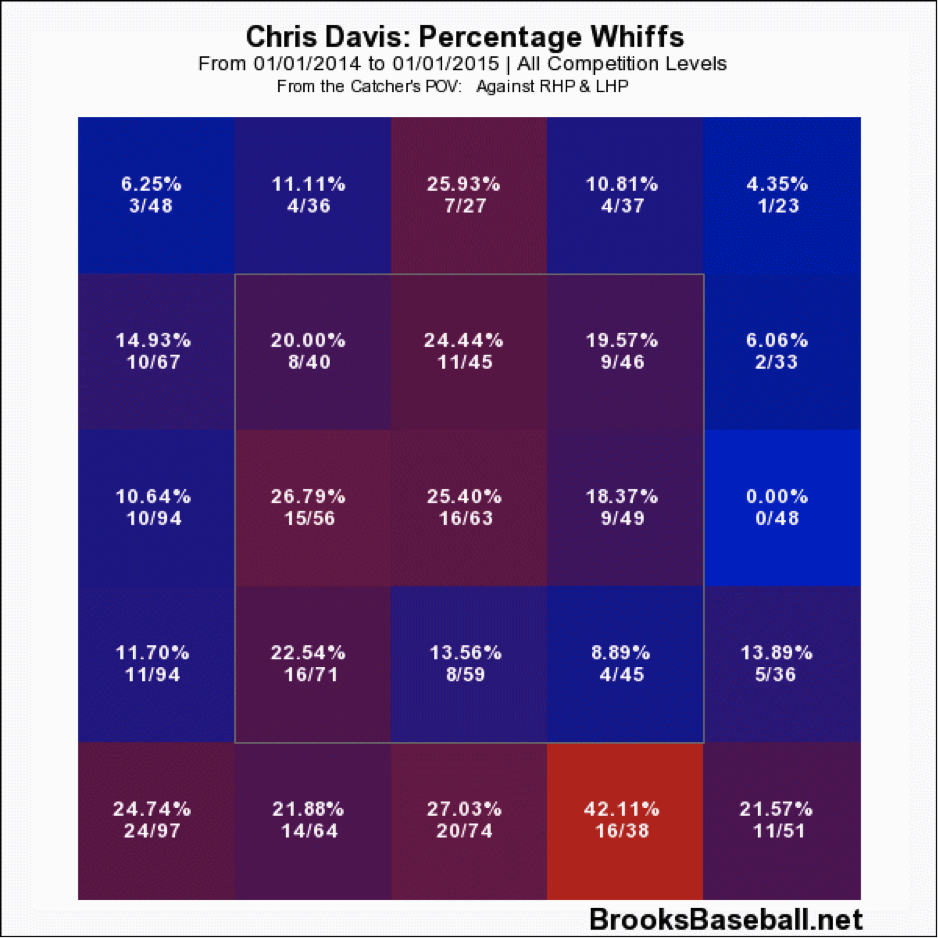 Aside from elevated numbers almost everywhere, the thing that pops out to me is how much more Davis is missing within the zone. Beyond that though, his 10 point jump in whiff rate on pitches in the dead center of the zone strikes me as concerning, as does the five point jump middle-up and seven point jump middle-out.

There are a lot of reasons this could be taking place, but the good news is that most of them are fixable. One theory is that Davis’ timing is off. If that’s the case, the four day All-Star break was likely a good chance for him to reset himself and get his timing right. Another is that his swing has gotten a bit too long, and that likely ties into timing issues, and would explain the jump in his whiff rate on inside pitches. That too could be helped by a small reset over the All-Star break, though it’s entirely possible it’s a funk that a four day break can’t resolve. I happen to think both of those issues are at play, and I think they could be exacerbated by a lingering injury. Way back at the beginning of this article, I mentioned Davis’ oblique strain that sidelined him in late April. While July is a long way from April, it’s worth noting that Davis returned in the minimum 15 days, while the standard oblique injury will sideline someone for 30 or more days. That he returned so quickly and has received relatively few off days since could mean he’s healthy, or it could mean he’s living with pain and it’s affecting the trigger to, and length of, his swing.

That’s all just speculation, as the numbers don’t reveal anything that would so obviously demonstrate where and how Davis is failing, but what that tells me is that he’s got a solid chance of returning as the Chris Davis we came to know and love over the past two seasons. I’d recommend holding on to Davis and allowing him to right the ship, especially in keeper and dynasty leagues. There’s not enough here to condemn him as broken with no chance for improvement. Something in the vein of a .250/.340/.460 line going forward isn’t unreasonable.

You need to be logged in to comment. Login or Subscribe
BrettLarter
One huge thing I've noticed just watching him play every day is that he keeps getting beaten by the shift and doesn't seem to be able to adjust. Even though he can take balls out of the park to all fields, he doesn't seem to be able to lace a ground ball down the third base line with any sort of intent.
Reply to BrettLarter
TheArtfulDodger
I agree the shift is a factor but unfortunately didn't have the time to go too deeply into that. Perhaps a follow up could look at the shift, though I suspect teams aren't shifting on him dramatically more than they were last year. He's missing more on pitches to the outer half in general would could explain up the middle/opposite field issues and more balls into the shift.
Reply to TheArtfulDodger
seankelleher2
Do you trade away Corey Dickerson, Adam Eaton, and C.J. Cron for Chris Davis and Brett Gardner in a dynasty league?
Reply to seankelleher2
TheArtfulDodger
I would, yes.
Reply to TheArtfulDodger
fbraconi
Well it's about time! Davis (along with Justin Verlander) have taken me out of my league's playoff hunt for the first time in 15 years. I have stopped dreaming of a 6-HR week and benched him. Your analysis understates how lost he is right now-- his strikeout % has risen each month, and in 43 PAs in July is an outrageous 46%. The O's need to fabricate an injury for him, then let him figure it out in a AAA "rehab" assignment.
Reply to fbraconi
BenC22
Such a sneaky humblebrag in here.
Reply to BenC22
schreibee
That was neither sneaky nor humble - just an outright brag, with a side of finger-pointing!
Perhaps we can rename it when someone says:
"_______ caused me to miss the playoffs for the first time in _____ years" a "Humbleblame"
Reply to schreibee
fbraconi
Hey guys, I can take a little good-natured ribbing. But putting my sneaky bragging aside for a moment, the nub of my comment is that when first-tier stars like Davis and Verlander go well into the season at below replacement level, their owners need some help and advice. Fast! It's an emergency! Probably too late, I've concluded that the problems of those two players are more deeply rooted than just a normal slump or bad BABIP luck. In fact, unless injuries are ultimately revealed as the underlying cause, both are on course for historically deep performance collapses.
Reply to fbraconi
TheArtfulDodger
In reference to the timing of this article, I want to stress a few things: If you need something from us earlier, tell us! I'm always searching for something to address in a freestyle, so get at me via email or twitter and I'm happy to address it. There's also the Bat Signal, Twitter, or email if you want something specific to your team addressed, so I'd encourage you to use any/all avenues there.

As for Davis/Verlander, I'll only address Davis, since I think Verlander is a separate issue. I don't think I attributed Davis' season purely to bad luck/BABIP. I do think there are some process issues (timing, long swing) but I also think those issues can be ironed out, especially since he's shown the ability to make swing adjustments before. I don't think it's a guarantee, but I do think there's a good chance, and that his potential rest of season production outweighs that of anyone you could move him for right now. 3 months of poor play shouldn't necessarily override the last two years of someone's career, especially if the issue is fixable. Again, that's not a guarantee, but it's the best we can hope for.
Reply to TheArtfulDodger
dcapofari
"Playoffs? you wanna talk about Playoffs? You kidding me? Playoffs?- Jim Mora
Reply to dcapofari
ravenight
In points leagues he's still pretty bad though. I was worried coming into the season, but I had him for cheap and he was so highly touted. The Ks just kill him though, he really needs to have a SLG over .550 to make a 30% K rate play, even his 2012 slash line would be borderline unplayable except in a deeper points league.
Reply to ravenight
TheArtfulDodger
Yes, it is definitely a different situation in points leagues thanks to the strikeouts. The line I laid out at the end of the article wouldn't be worthwhile if he's striking out the way he is.
Reply to TheArtfulDodger
harderj
I saw something else on Davis, that last year his fly ball distance averaged 309 feet, ninth best in the majors (or at least A.L., sorry I don't remember which) and this year it's down to...308 feet, also ninth best. So the drop in HR/FB is kind of puzzling. I don't know where to find a spray chart on fly balls hit to compare this year to last, but that might be interesting.
Reply to harderj
TheArtfulDodger
Where I looked his avg FB distance was down about 3 feet, but that's also not substantial. His average home run difference was down 10 feet, which *is* substantial. Hard to reconcile the two, so after only three months I'd chalk it up to a bit of variance.
Reply to TheArtfulDodger
sbnirish77
How Verlander has avoided the fate of the likes of Fernandez and Tanaka is beyond me. His day of reckoning is coming !
Reply to sbnirish77