Tampa Bay Rays
This can be a difficult article to write. Speculating on saves is a tricky thing, one that requires following a lot of beat writers and trying to find trends written into stat lines. The closer job is a serious one, and it’s not like managers pick the closer for completely arbitrary reasons that have little to do with logic and are more holistic in nature. I mean there’s no way someone would pick a closer based on aura, right?

Closed w/ Grant tonight because I saw him walking his grandmother thru the hotel lobby today. It was an impressive moment. Liked his karma.

I assume this was done largely tongue in cheek. He’s had a nice run of appearances dating back to June 17, and he’s pitched in the ninth in his last two outings. Jake McGee, however, has a scoreless streak that runs back to June 6 and it covers 11.2 innings. I don’t think a move is imminent, as McGee has pitched very, very well. Balfour owners can hope that Maddon’s outside the box thinking allows for another Balfour opportunity to pitch the ninth consistently, but those are long odds.

San Francisco Giants
Santiago Casilla has moved from “maybe closer” to “named closer” while Sergio Romo works to figure some things out. Jeremy Affeldt will work in the sixth and seventh as a multi-inning guy. Romo flew apart quickly and serves as a good reminder (one of many) of how quickly lock-down closers can lose their stuff. It’s dependent on player profile, of course, but guys with thin margins tend to have those margins evaporate quickly. Romo can still earn the job back, and I’m rooting for him to do so; it’s just going to be a tough uphill climb.

Los Angeles Angels
When the Jason Grilli for Ernesto Frieri trade went down I imagined that Grilli would have the easier path to saves, as Frieri would have to contend with a lode of talented arms in the Pittsburgh pen. That might be the case, but Joe Smith has been magnificent all year and has done little to warrant a demotion. Grilli might not get a shot after all.

Chicago White Sox
I’ve been getting some questions on Javy Guerra in chats and on Twitter. The main weakness with the White Sox relief corps ties into a rather astonishing inability to miss bats considering the current offensive context we are in. This will be a record-breaking year for strikeouts, and yet White Sox relievers are unable to capitalize on the trend.

Ronald Belisario doesn’t generate a lot of strikeouts. Ditto Zach Putnam and Jake Petricka. Javy Guerra does, as he has a 23.1 percent strikeout rate. It comes at the cost of command, as his 12.8 percent walk rate will attest, but that’s not exactly uncommon in the White Sox bullpen either. When it comes to the ninth manages will tend to favor strike throwers over guys with double-digit walk rates. The strikeout number has to almost be Marmol level for a high walk guy to earn ninth inning chances. Guerra isn’t there but, considering the overall failure of White Sox closers this year and the profiles of both Putnam and Petricka, I will not say Guerra will not get a look. I will only say it’s unlikely.

If there’s anything this White Sox bullpen has taught me this year, it’s that nothing is impossible (that’s not a positive).

Chicago Cubs
Hector Rondon is still getting save opportunities in spite of Neil Ramirez’s continued excellence. Weird, not used to the Cubs having two solid closer options.

Texas Rangers
The Mexicutioner, Joakim Soria, has 16 saves a 10-to-1 K:BB ratio and a FIP under 1.00. Welcome back, my friend. On a somewhat related note, Neftali Feliz was recalled by the Rangers on Saturday (betcha forgot about him).

Atlanta Braves
I wondered early in the season after a few struggles and a health scare if we were seeing the beginning of the end of Craig Kimbrel. He has 27 saves and a 41.7 percent strikeout rate. So, I was wrong. 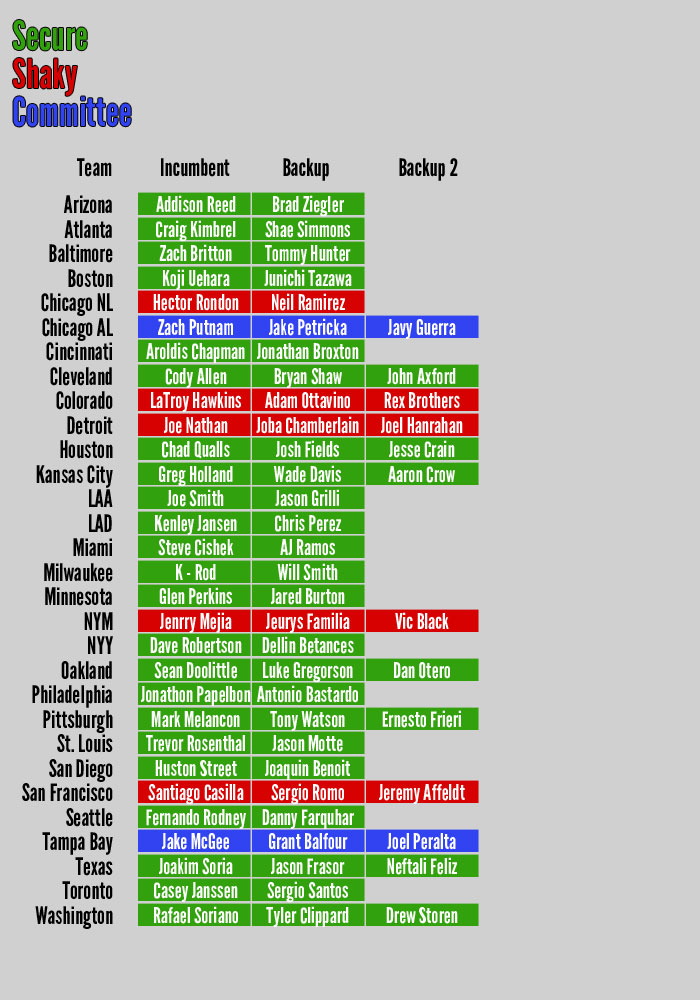 You need to be logged in to comment. Login or Subscribe
MikeGianella
Re: Romo, the advice I always give on deposed closers is that if the guy in the ninth is going well, he's going to keep the job, unless the guy who is struggling is one of the rare studs like Craig Kimbrel, Aroldis Chapman, or the retired Mariano Rivera. Even big contracts don't necessarily mean an automatic return to the role. If Casilla pitches well, I think he keeps it.
Reply to MikeGianella
MRubio52
Agree here.
Reply to MRubio52
jrbdmb
Two Chicago questions:

Cubs - any reason to think Ramirez will get a shot without some meltdowns from Rondon? Managers seem to avoid messing with something that's currently working.

Sox - long term (meaning the rest of this year) should we expect Matt Lindstrom or Nate Jones to get a serious look once one of them comes off the DL?
Reply to jrbdmb
MRubio52
Hey, sorry, missed this.

No to the first, Ricky seems like a traditionalist and it'll take a meltdown for Ramirez to get a shot.

White Sox - Both will get long looks. This bullpen is a dumpster fire.
Reply to MRubio52
paytonlc
Would you give up Matt Adams for J Soria? I'm really in need of quality innings and saves. Does anyone think he will end up in a setup role on a different team? Saves are pretty tough to come by in this league and closers have been dealt for outrageous returns.
Reply to paytonlc
MRubio52
If you can survive the lost offense I pull trigger on this deal.
Reply to MRubio52
eskimoQball
Any concern about Cishek, given how the past couple weeks have gone?
Reply to eskimoQball