It’s only the third installment of The Buyer’s Guide on Baseball Prospectus—you can find the previous two right here and here—so I still feel obligated to introduce the column and to elaborate on what we’re doing in this space each Monday.

The overall goal is always to better understand an individual player’s trends and to make our best educated guess for future performance. With that said, I also strive to center the discussion around fantasy value. We’ll place a buy, sell, or hold label on the individual player each week, but readers should more importantly leave with a few concrete trends or performance changes upon which to focus and to ultimately make the buy-or-sell decision on their own. I’m simply offering my best recommendation.

This week, y’all didn’t step your recommendation game up in the comments or on Twitter, so I got to choose who I wanted to write about. That’s starter Michael Wacha of the St. Louis Cardinals.

As always, let’s do this.

Small sample sizes routinely get misused in fantasy baseball. Too often, players are added and dropped in fantasy leagues after a brief hot or cold streak, and owners fail to recognize those abnormal stretches are not representative of future performance, good or bad. Conversely, small sample sizes are too often discarded as unimportant, as some owners favor the larger body of work as more likely to be indicative of future performance.

With that in mind, I’d like to discuss the two most-recent starts from right-hander Michael Wacha of the St. Louis Cardinals. Yes, that same Michael Wacha who owns a stellar 2.88 ERA with a 2.85 FIP, and the same Michael Wacha who was included on The Holy Trinity list a couple weeks ago—meaning he’s above-average in striking out batters, avoiding walks, and inducing grounders. He has been phenomenal and is only about to turn 23 years old. He’s gold in dynasty leagues and at least a top-30 starter in non-keeper leagues.

Thus, I don’t blame many of you for scoffing at my insistence that we focus on his past two starts, but I’m particularly intrigued by his two most recent starts because they illustrate a dramatic difference in his profile. It’s not a matter of allowing seven earned runs in 11 innings. Quiet alarm bells begin ringing softly when one notes Wacha has walked five and only struck out one over that timeframe. For a guy who struck out 19 batters in 10 1/3 innings at one point earlier this season, such a dearth of whiffs slightly strains the mind.

A recent article by Derrick Goold in the St. Louis Post-Dispatch discusses Wacha’s struggles and discusses how he couldn’t find his release point on June 11 against the Tampa Bay Rays:

“Wacha mentioned that his release point was off on his fastball. Matheny traced the trouble back to the rhythm the young righty had on the mound and how he would jump or bounce in his mechanics, jarring that release point.”

This altered release point can perhaps be the cause of his heightened walk rate and decreased strikeout rate, but more importantly, it could explain the overall loss of velocity in his recent starts. Check out his velocity chart from the 2014 season:

Wacha’s velocity has certainly decreased in June. Interestingly, though, we can readily see that his velocity has remained consistent on his curveball and cutter, which perhaps lends credence to the notion that he only legitimately lost his release point on his fastball and changeup, both of which should utilize the same arm action to create maximum effectiveness.

Thus, perhaps we should only expect his whiff rate to decline on his fastball and changeup, and not his curveball or his cutter. Looking at his whiff rates this year, we can certainly see those trends: 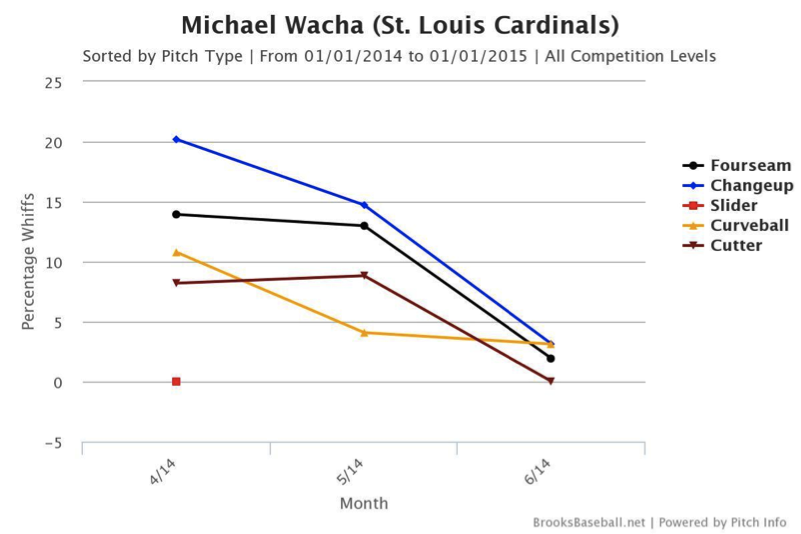 The numbers shake out almost exactly as one would expect, aside from his cutter’s whiff rate—though that concern is lessened once we realize he’s only thrown nine cutters all month. Otherwise, Wacha’s whiff rate on his fastball and changeup have taken a nosedive in June, while his curveball has remained relatively consistent. Unfortunately, his curveball hasn’t been an overly effective pitch throughout the season, anyway.

I would normally raise a miniature red flag with sudden midseason velocity loss, as it could be a sign of a potential injury. However, given the overall context surrounding his rough couple starts, it appears to be a simple case of Wacha battling himself on the mound and attempting to rediscover his release point. It’s a long season and rough patches, such as this current one, happen.

However, it’s also fair to ask whether Wacha can be expected to find his release point once again—especially for fantasy owners in single-season, re-draft leagues. The concern is about the here-and-now, not the whole skill set over the next four or five seasons. Those types of owners need to know whether Wacha can spin a one-eighty and dominate for most of the final three-and-a-half months.

The simplistic argument is that fantasy owners should expect Wacha to right the ship because he has the better part of 140 innings that suggest he will. If we cast our gaze back to last June, though, we can also see that Wacha has dealt with sudden velocity declines before and bounced back. Wacha’s fourseam fastball averaged over 94 mph every month he pitched in the big leagues in 2013, except one month: June (92.82 mph). Granted, it was only a pair of starts and he was optioned back to Triple-A Memphis, but the right-hander returned in August and once again pumped 94-plus with the fastball.

Perhaps that’s coincidental or only anecdotal evidence; however, I think it more speaks to the velocity changes that can occur throughout a season and how sudden dips or spikes are not necessarily permanent.

As mentioned in the opening diatribe regarding small sample sizes, though, owners should continue to monitor the situation. Pay attention to Wacha’s velocity and his whiff rate in upcoming starts. See if his fastball and changeup bump back up to previous velocities. If his fastball continues to remain below 94 mph and the whiff rate remains rock bottom, perhaps it would be a time to shop him in re-draft leagues or begin to worry about a lingering injury. But until the velocity decrease becomes more of a significant track record, it’s nothing more than a frustrating hiccup in the middle of the season.

Buyer’s Advice: HOLD
The recent 5.73 ERA over Wacha’s last two starts—with a strikeout rate of 0.82 K/9 and a walk rate of 4.09 BB/9—is supremely unattractive, and he’s one or two disappointing starts from fantasy owners wondering if they should sell before his value decreases too much. I’d strongly advise against selling at this point, as it appears to be simply a blip on the radar and he should continue to be a top-30 overall starter. On the other hand, I’m not advocating that owners go out and spend significant resources to acquire Wacha because there’s a slight possibility this velocity and whiff rate decrease could be something more significant or permanent, and you don’t want to be on the hook with such a profile if that proves true. Thus, holding seems to be the preferred route until we can determine what this small sample size will morph into — but more generally, I think it’s important that a small sample size such as this one gives fantasy owners something specific for which to watch in the coming weeks. It’s that active watching that can pay massive dividends throughout a fantasy baseball season.

How about Nolan Arenado for your next writeup?
Reply to sam19041
sam19041
Or Melky Cabrera? Would be interesting given his yoyo performance the last couple of years. Looks pretty great now though.
Reply to sam19041
Dillon415
Is there a point when we should give up on Justin Verlander? My Commissioner blew it on the invites and we ended up drafting as a 10-team league so I've got Latos who has to come off of the DL and nobody else is worth dropping. With so many playable options in FA, nobody wants to trade, either... especially not 2:1. Thoughts?
Reply to Dillon415
D1Johnson
I would like to suggest Billy Butler.
Reply to D1Johnson
sfrischbp
How about Garrett Richards? PECOTA does not like him long term. Is he having a 90th percentile season or will he be in the "people who changed PECOTA's mind" article next season?
Reply to sfrischbp