Chicago Cubs
Neil Ramirez has been the hot commodity in the Cubs bullpen lately. Ramirez has racked up 26 strikeouts 17 innings, all with a 1.06 ERA and a 0.76 WHIP. Ramirez was used as the closer on Sunday and notched his third save of the season. His success creates an interesting situation in the Cubs bullpen, as they suddenly find themselves with two capable end-game options in Ramirez and Hector Rondon, who was held out of a few games with elbow tightness. If you’re desperate for saves and you are looking for a speculative play, Ramirez is the hot name to pick up, but I still think Rondon will be the closer until he falters.

Tampa Bay Rays
Grant Balfour’s meltdowns have led to a closer-by-committee situation in Tampa. Balfour’s most recent appearance was a 2 1/3-inning save against the Cardinals on June 11. Jake McGee got the save on Sunday against the Astros. Maddon was sure to mention that the Rays were still in committee mode after Balfour’s multi-inning save, so Joel Peralta, Juan Oviedo, McGee, and Balfour are all still in play closer-wise. If you have Balfour and can stash him, I would advise doing so. Maddon is known for his creativity, so picking out a strong candidate from this group will be tough, but I think Balfour will eventually work his way back into the closer role.

Los Angeles Angels
Ernesto Frieri is on the brink of losing his job again. Frieri’s ERA is hovering around 5.00 after his most recent blowup that involved giving up four earned runs while recording zero outs against the Braves on Saturday night. Joe Smith is the logical next man up should the Angels make a change at closer. Scioscia has recently given Frieri a vote of confidence, and he’s shown a considerable amount of leeway with Frieri in the past, but I think Smith is a worthwhile pick up, as I can see him grabbing vulture saves and perhaps assuming the job full time if Frieri can’t figure himself out.

Detroit Tigers
Joe Nathan is still the Tigers’ closer, but he’s been struggling lately, as has been the story of the 2014 Detroit bullpen. Joba Chamberlain failed miserably in his audition, but that was the one blemish in his season. Ian Krol also notched a save for the Tigers on June 14, but he struggled in the outing, giving up two earned runs. Corey Knebel was sent down to work on fastball command, so the bullpen options in the Tigers pen are down to Nathan and Chamberlain in my mind. I think Joba will eventually assume and hold onto the role.

San Francisco Giants
Sergio Romo has an odd stat line. He has a low WHIP of 0.95, 20 saves, and an ERA in the 5.00s after two rough outings against the Rockies. Romo has always existed on the margins, as his stuff wasn’t the typical power arsenal that we generally see from closers. While there are intriguing options in the Giants pen, this seems like an aberration and there’s no talk yet of the Giants making a switch. Still, now is probably the time to start at least getting acquainted with the rest of his pen-mates, especially Juan Guiterrez and Jean Machi.

New York Mets
Jenrry Mejia is dealing with back stiffness; he’s still the closer, but Jeurys Familia might be vulturing some saves.

Cleveland Indians
Axford was wild again on Sunday, as he walked the bases loaded in the ninth. It looks like Cody Allen might just stick around. 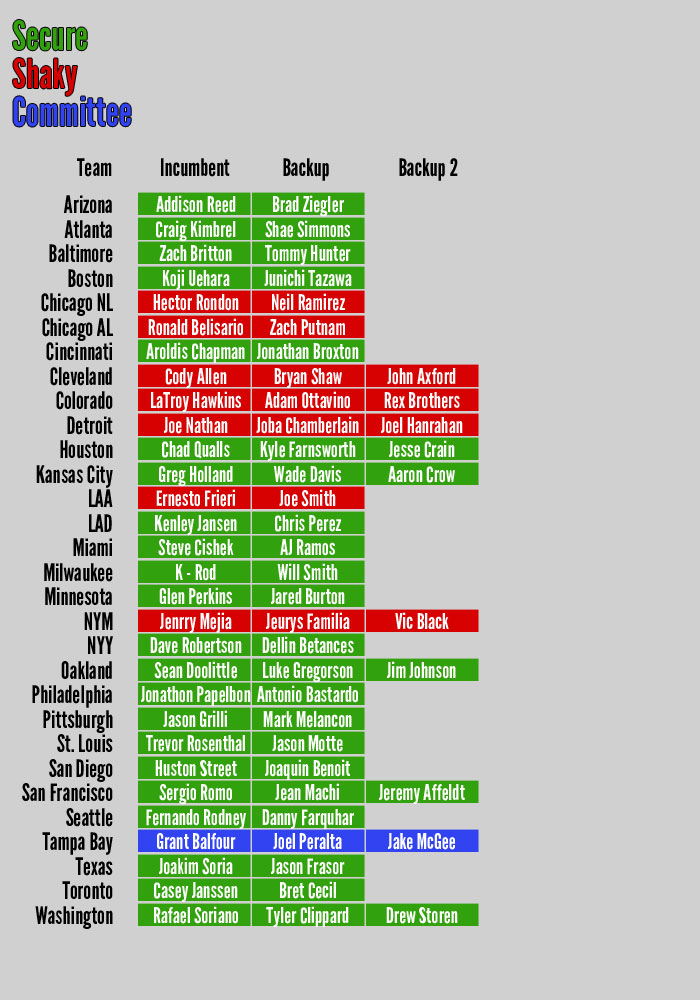 You need to be logged in to comment. Login or Subscribe
tmangell
Thanks for the chart, but please change the second "Pittsburgh" to "St. Louis."
Reply to tmangell
kvamlnk
and the second san francisco to seattle.
Reply to kvamlnk
kddean
I've been holding on to Ottavino in an NL only league that includes holds, but his numbers are not so impressive.
Is he going to stay in line for holds or saves moving forward? I'm starting to lose my patience with him.
Reply to kddean
Cronfordox
the new graphic is very useful, thanks for your efforts!!
Reply to Cronfordox
BERSMR
Yes, the graphic is a nice addition. While I think it is right that if someone else in Baltimore is going to completely take the closer job from Zach Britton at some point, it is likely to be Hunter, I don't think that Hunter is the #2 guy/set up guy in that bullpen right now.
Reply to BERSMR