For those who missed the inaugural installment of The Buyer’s Guide last week (which can be found here), allow me to offer a brief outline of what we do in this space every Monday. The Buyer’s Guide breaks down the performance of an individual player in an attempt to determine if fantasy owners should buy, hold, or sell. Occasionally, I have a player in mind to highlight, but I’m also committed to featuring players y’all suggest in the comments or on Twitter.

As always, let’s do this.

Pablo Sandoval burst onto the baseball scene in 2009, when he hit .330/.387/.556 with 25 home runs as a 22-year-old kid from Venezuela. He earned the nickname “Kung Fu Panda” and quickly endeared himself to a large swath of the baseball community, including many fantasy owners who benefited from his breakout season.

With such an up-and-down history over the past five years, it’s understandable that fantasy owners would be skittish about Sandoval. He’s coming off a season in which he was the 15th-ranked third baseman in ESPN leagues, and his current .299 wOBA doesn’t do much to alleviate the fear that he could be in the midst of a permanent decline in production. After all, the big man barely cracks the top-20 for third basemen this year and is behind such stalwarts as Casey McGehee, Juan Francisco, and Yangervis Solarte.

A couple of things to ponder, though:

(1) Sandoval is only 27 years old. Seriously. You’ll just have to trust me on that one. I double-checked the math when I saw his age on his BP profile page.

(2) Since the beginning of May, Sandoval is hitting .290 with seven doubles, six home runs, and 20 runs batted in. So there seems to be something cooking, and fantasy owners may want to take advantage.

(3) His current .258 BABIP is more than 50-points lower than his career .311 BABIP. Without being overly simplistic, that number should be expected to rise throughout the remainder of the season. Sandoval has never finished a season with a BABIP lower than .290.

Therefore, I absolutely understand why people are interested in kicking the tires on Pablo Sandoval as a potential buy-low candidate. Before shutting down the analysis and slapping a “buy” label on him, though, I want to offer a few pieces of data that should serve a larger point that I’d like to make.

Namely, it should be noted that Sandoval may have become primarily a platoon option for fantasy owners.

This isn’t necessarily intuitive because the 27-year-old third baseman is a switch hitter, so one naturally tends to think that he should transcend platoon splits. That certainly hasn’t been the case this year. Against left-handed pitching, Sandoval is only hitting .158/.220/.289 with five extra-base hits. Now, some people will point to his .167 BABIP against lefties—which is something important to address—but focusing on his BABIP seems to trivialize his historical lack of production against southpaws.

Sandoval owns a career .276/.325/.398 slash line against lefties, so it’s not that he’s been unusable throughout his career. Rather, it’s the consistent lack of power as a right-handed hitter that jumps out. His career ISO against lefties is .122. Against righties, his career ISO is .197. That’s a significant power split for a switch hitter.

To be fair, there is a traditional argument that posits switch hitters generally hit for more power as a left-handed hitter, so perhaps this is merely another example of the axiom. Lately, though, it’s maybe become more than that. We can also see that Sandoval has increasingly had more trouble making contact against lefties than against righties. 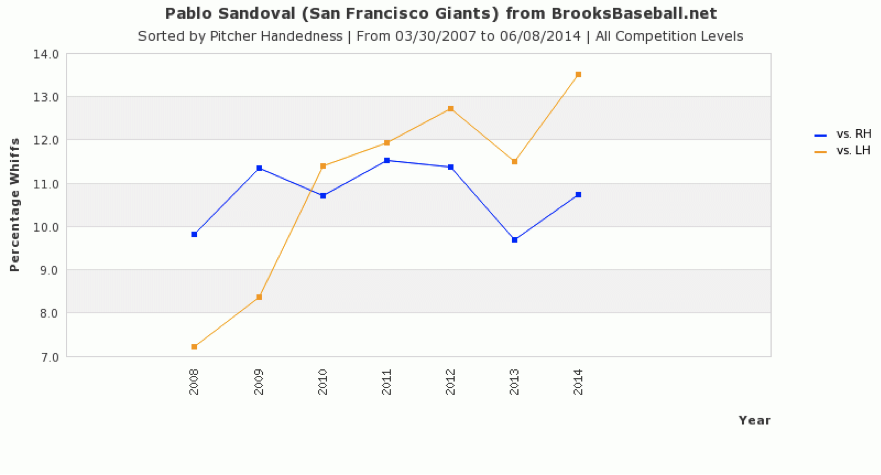 The graph illustrates the point rather clearly. Throughout his career, his whiff rate against lefties has increased, while his whiff rate against righties has largely remained constant. If anything, it’s decreased. That’s speaking to an overarching point that Sandoval is perhaps becoming a liability of sorts against southpaws.

And if we look at his recent uptick in performance, which was mentioned earlier, it’s not difficult to determine why he’s had more success. Take a look at who he’s faced over the past month: 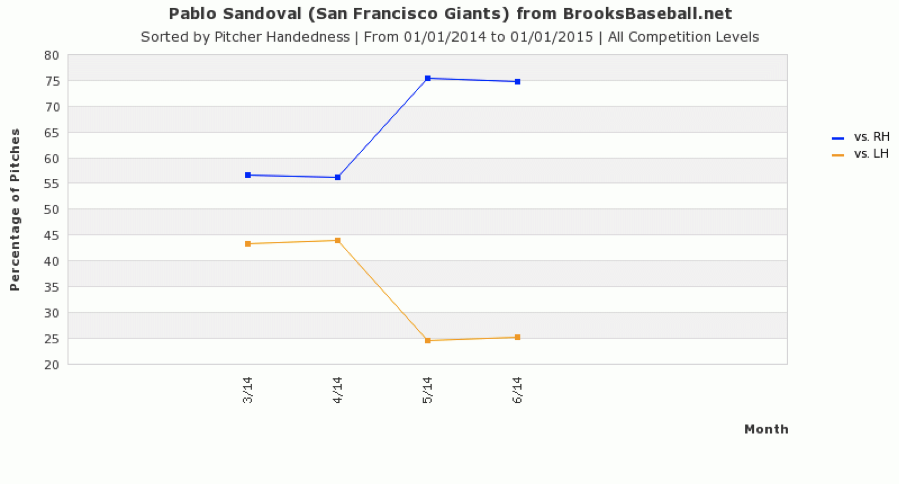 Care to guess when Sandoval has started to “put it together” this year? Yeah, May. After posting a .253 wOBA in April, he clobbered the baseball and compiled a .373 wOBA in May. His production has dropped off yet again in June, but it’s only been six games. I know we’re already talking about small sample sizes when breaking down monthly performance, but I just can’t make a point when only looking at six games.

To make the point more succinctly, though, it’s becoming a significant trend that Pablo Sandoval struggles more against lefties than he does against righties—and I’m not certain that platoon split is minor anymore. His whiff percentage has grown against southpaws as a of late, and the power production is certainly down. Even last year, when he hit .270 with a .341 on-base percentage against lefties, his slugging percentage was still .345 and he only managed a .074 ISO.

I also wonder how much Sandoval is beginning to struggle with velocity from the right side of the plate. His batting average and ISO against righties and lefties since the beginning of 2013 seem to suggest that’s the case.

The numbers appear rather similar across the board, aside from the numbers against fastballs and sinkers against left-handed pitching. The power is lower against lefties everywhere, but the batting average is much lower against pitches that classify as “hard” pitches. Thus, we’re not seeing Sandoval just begin to swing-and-miss more against southpaws, but we’re also seeing him handle velocity with less effectiveness. That’s just bad news no matter which way you look at it.

Ideally, for fantasy owners at this point, Pablo Sandoval is a easy must-start against right-handed pitching. He got off to a slow start against righties this year, but has great career numbers against right-handed pitching (.298 TAv) and demolished righties in the month of May. For those fantasy owners in daily leagues, though, it’s becoming a legitimate quandary as to whether he should be started against lefties. The numbers suggest he’s trending the wrong way against southpaws, and at best, he’s someone who’s only going to offer an empty batting average. Fortunately, though, his stronger skill set lies on the strong side of the platoon—so even for weekly owners, he’s still probably a decent option.

Despite the uptick in recent performance, I’m not comfortable advocating that fantasy owners make a strong push to trade for someone who’s potentially only a platoon option going forward. For those who already own Sandoval, though, he should still provide enough value to keep in the everyday roster. I might suggest that owners in daily leagues scour the waiver wire to see if any cheap third base options exist who kill left-handed pitching to serve as a platoon partner—such as Mark Reynolds or even Trevor Plouffe, who has traditionally performed better against lefties throughout his career. But being that Sandoval does have the benefit of a strong side of the platoon, such a move might not be completely necessary for leagues who don’t offer many bench spots.

You need to be logged in to comment. Login or Subscribe
phillipsmc
One note on your final suggestions. Isn't it a myth that you should pair a lefty-masher in your platoon? Two guys who hit RHP will have more good opportunities than 1 guy for RHP and one for LHP.
Reply to phillipsmc
jimmyb1799
You're correct that it doesn't have to be someone who can mash lefties. I got stuck in real-world baseball mode for a bit, so you'll have to excuse me. You bring up a very valid point.
Reply to jimmyb1799
jonjacoby
Thanks JP. I guess the clock on my fifteen minutes has started.
Reply to jonjacoby
mcesare
I have asche at 3b now and thinking of trading for the Panda to replace him but it would put me up against our league's salary cap. We count R, RBI, HR, SB, OBP and SLG. Do you think the Panda will be an upgrade going forward or enough of an upgrade or should I look elsewhere to "spend" my salary cap room. Catcher and OF are the other spots I might look to improve.
Reply to mcesare
jimmyb1799
It certainly depends on the cost, but Sandoval would be a solid improvement over Asche.
Reply to jimmyb1799