The Indians, fresh off a Wild Card Game appearance in 2013, are in last place in the AL Central. While no one player is to blame for the team's struggles, Carlos Santana's early-season woes are eye-catching. Everyone expected Santana, who has transitioned to third base after spending his first four seasons at catcher, to struggle on defense. Yet nobody anticipated his .159/.327/.301 slash line through 220 plate appearances. The question at hand then, for the Indians and for fantasy owners alike, is whether Santana will be a productive player from this point on. The answer, as it so happens, is yes.

The biggest pimple on the oily face that is Santana’s batted-ball data is the lack of line drives. Santana is no stranger to low line drive rates—regularly producing below the league-average—but his 11.7 percent clip in 2014 would represent a new career-low. The line drives he’s missing have mostly turned into ground balls, though his fly ball rate has increased as well. He's maintained a 20-homer pace because his home-run-per-fly-ball rate has remained static even with the increase in fly balls.

The biggest constant in Santana’s season is his impressive amount of walks. His batting average may stink to high heaven but his approach has remained sound, with a walk rate of 19.5 percent, which would represent a career-high. His 43 walks pace the major leagues, leading the likes of Andrew McCutchen and Jose Bautista—far more impressive hitters to date.

So it’s not that he’s lost himself at the plate, or that he’s utterly lacking power (as his HR/FB rate would attest). And while he’s not markedly worse at connecting with pitches inside the strike zone with a Z-Contact percentage of 84.9 versus his career rate of 85.6, he has struggled to drive the ball with any consistency. His home runs are slightly down on a rate basis, but his doubles are down significantly. A look at his slugging rates this year, versus his career rates: 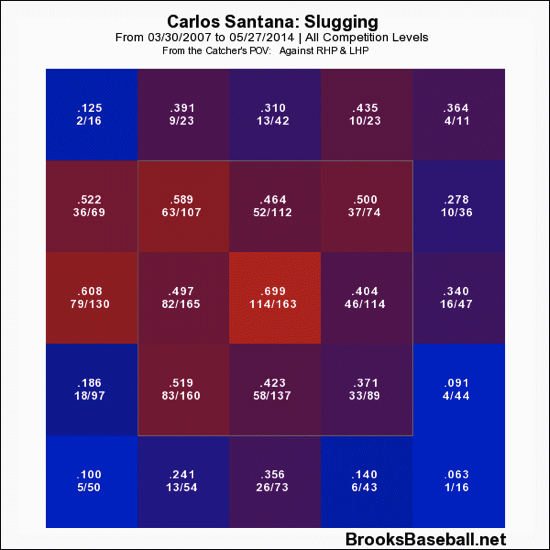 The real issue for Santana, it would appear, has been hitting for power from the right side of the plate. Below are zone charts by slugging percentage, for both 2014 and his career. We can see just how much he’s struggling in general, but while he’s doing his part on low and middle-in as a lefty, he’s not managing the outside third of the plate well as a righty, something he normally excels at doing. 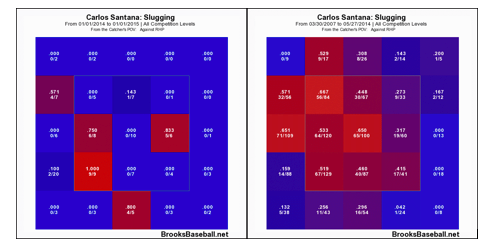 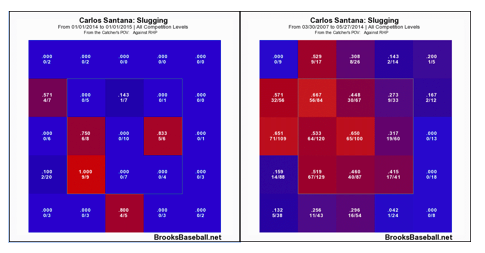 Santana is missing in a lot of places he normally punishes the ball, most notably down the middle as a left-hander and the aforementioned out third as a right-hander. Showing how bad he’s been doesn’t really help explain why he’s been so bad though. He’s looked bad throughout the season, and perhaps there’s a timing issue at hand, thanks to his exaggerated leg kick/toe tap timing mechanism.

While much has been made of the use of the shift against Santana, and deservedly so, he was shifted against before without the same lack of production. His current penchant of hitting for zero power and more ground balls isn’t helping matters, as those feckless grounders just go right into the jaws of the shift. That said, his .177 overall BABIP isn’t sustainable in a good way. He’s somehow managed to only be 12 percent worse than league average offensively (per wRC+) despite his slash line looking like it just faced Gregor Clegane in battle.

Most batting rates have stabilized by now, which might have people thinking that this Carlos Santana is here to stay, but while those are good guidelines for judging change in a player’s approach, in some cases their career rates are more indicative of the player they are, and will be. All of this is to say, there’s not so much difference in Santana’s approach compared to his career rates that we should expect something notably different from his career rates going forward.

Assuming there’s nothing physically wrong with Santana, things should get better. His walk rate should ebb a bit, his hard contact should flow, and we should see something more like the player we’ve come to know and be frustrated by. It’s not all bad luck, and a healthier BABIP won’t fix everything, but it should fix enough that, combined with his natural talent shining through, Santana can be an asset from here on out.

Thanks to Nick Wheatley-Schaller and Al Ciamaichella for their insights and contributions to this piece.

You need to be logged in to comment. Login or Subscribe
jfranco77
And he was just placed on the 7-day concussion DL.
Reply to jfranco77
bpelow
He is one of my major investments in my AL only that has sunk my team thus far. Really hoping for a turnaround when he comes back from the concussion.
Reply to bpelow