Last week, I took the opportunity that the Fantasy Freestyle affords us to look at one of the hotter pitching names in the early going: Nathan Eovaldi. This week I thought it prudent to take a similar look at another starter that is burning up the waiver wires and getting a lot of love from the internetting baseball community (in fact he was just profiled by Mike Petriello yesterday). We look at Dallas Keuchel on the heels of the latest sterling performance in a string of many. His eight and two-thirds inning performance left him one out shy of a second consecutive complete game. He lowered his ERA from 3.06 to 2.92 and he induced 18 ground balls, a season-high, snapping a streak of three straight games where he induced 15 ground balls.

Keuchel’s emergence as a high quality rotation option is as surprising as he’s been dominant. As a minor leaguer he never once cracked a 20 percent strikeout rate. Last year he checked in at 18 percent and this year he’s upped his game to just under 23 percent. He’s paired that impressive knack for improvement with a diminishing walk rate, going from 10.3 percent in 2012 to 7.6 percent last year to five percent thus far in 2014. Where he really sets himself apart though, is in his batted ball profile. Keuchel is generating ground balls at a 67.7 percent clip. For frame of reference Justin Masterson, as elite a ground ball starting pitcher as there is topped out at just under 60 percent in 2010, and even then his fly ball rate was five percentage points higher than Keuchel’s is now.

We can’t just sit here and cry “regression” though. Keuchel has always been a ground ball pitcher and his 55 percent rate in 2013 is nothing to ignore. While it’s unlikely he remains well above 60 percent, we shouldn’t assume everything will come crashing down. It’s worth noting that not only has Keuchel generated ground balls at a tremendous rate, but that he’s getting “lucky” in terms of batting average on those ground balls, with a BABIP of .204 on ground balls compared to the league average of .240. That’s not a marked difference in raw totals at this point in the season, but on a rate basis it would represent a large gap, and going forward something closer to a league average rate would be expected given the generally solid but not great infield defense behind him.

Another factor working against Keuchel’s continued run of greatness is the depressed line drive percentage he’s been able to generate. His current line drive percentage rests at 12.6 after producing a 21 percent figure in 2013. The league average is 20.2 percent right now, and while it’s possible Keuchel has mastered something that would result in more ground balls and fewer line drives, it’s likely that he gives some number of grounders back in favor of line drives. Add that to his likely regression on batting average on the grounders he is allowing and all of this spells that Keuchel is on an run that will come to an end.

That doesn’t mean he’s worthless though. As with Eovaldi, there’s real progress here. Keuchel pounds the lower portion of the strike zone to an incredible degree, as you might expect for someone without the velocity to live in the upper regions of the strike zone. 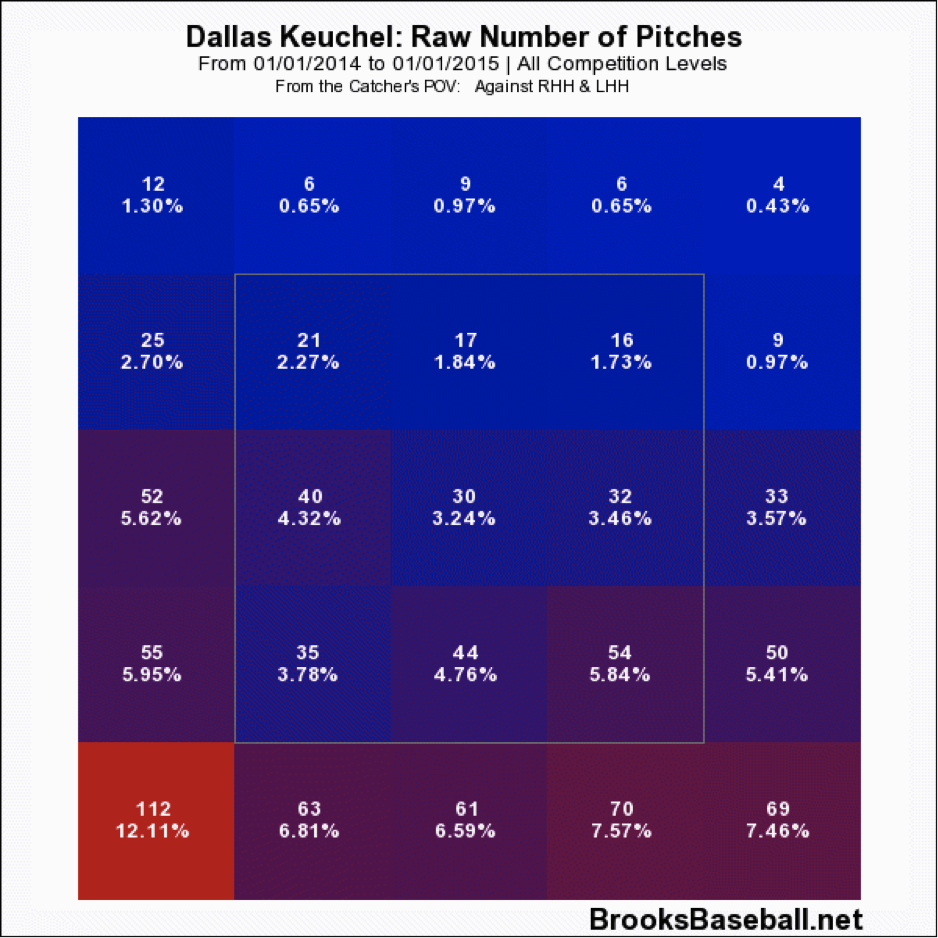 His slider is featuring a bit more movement, and as could be anticipated with all the grounders, Keuchel has limited the long ball, bringing his HR/FB rate down from 17.4 percent to 12.1 percent. That’s still above league average, but it’s improvement for Keuchel, and if he can retain that improvement, his numbers should be plenty serviceable from a fantasy standpoint even with the expected regression in other categories.

The last area that could come back to haunt Keuchel is in LOB percentage. His career best entering the season was 68.1 percent, and his current figure is at 76.7 percent. All of these things spell a decent drop off from his current performance, though it can’t be said enough that even with a drop off, Keuchel can hold value in most fantasy formats.

Keuchel should be able to continue to miss bats at something close to this pace, but between wins being hard to come by and the small regressions across multiple categories he can be treated as an SP4 or SP5, and if you’re receiving offers that value him above that, it’s worth pocketing the value he’s given you and moving on.

You need to be logged in to comment. Login or Subscribe
lkirbo35
Is Xander Bogaerts straight up a good deal? Because I just took it.
Reply to lkirbo35