Yesterday, Ben Carsley and I released the first portion of our Top 150 U25 fantasy players, the culmination of a six-week division-by-division look. The name that received the most attention was one towards the bottom of the list, with Nathan Eovaldi checking in at no. 141 on our collaborative list. Eovaldi has jumped out to a great start in 2014, posting a 2.86 ERA backed by a 2.94 FIP, and phenomenal strikeout and walk rates, at 23.4 percent and 4.9 percent, respectively.

This has earned him many plaudits, and a ton of new fans, as fantasy owners who took a random flier on him have become devoted advocates. The question at hand for Eovaldi, and an important one for those wondering how to value him, is whether this new level of success is sustainable. Our eyes tell us it is, as we watch 96 MPH fastball after 96 MPH fastball whiz by us, even into the seventh or eighth inning. So if the numbers say one thing, and our eyes confirm it (or vice versa), where is the debate?

When it comes to Eovaldi, the argument lies in the past, as there is little wrong with the present. You see, while his strikeout rate is beautiful, it’s a stark departure from his previous career-high rate of 17.3 percent. Additionally, his sterling walk rate is substantially lower than his career-low of 8.9 percent. His staggering 56.3 percent ground ball rate beats out his previous career-best of 45.5 percent by nearly 11 percentage points! All these rates moving in the right direction should, and do, indicate a better pitcher on the mound, so once again we ask: where’s the problem? As is the custom of my people, let me answer your question with another question. How is he doing all these things? What about his process has changed that has seen these massive changes take place?

We first turn to Brooks Baseball for a look at his pitch mix, to see whether it’s markedly different from years prior. Perhaps a new pitch has entered the mix, with remarkable effectiveness, yielding such positive results?

It’s hard to say that there is a new pitch in town, but his slider usage has jumped by a significant amount*, and mostly at the expense of his fastball. While that may lead one to believe more sliders = more missed bats, that doesn’t seem to be the case for Eovaldi, as we check out the whiff percentages on his pitches.

*One more bit of news that seems relevant in the wake of Jose Fernandez’s heart-rending injury? Eovaldi had Tommy John surgery in high school (part of the reason he fell to the 11th round), which leaves him outside the five-year “honeymoon period” suggested by Will Carroll based on research done in 2006. With the honeymoon period over and a marked increase in slider usage, it’s fair to hold considerable concern for the well-being of Eovaldi’s elbow in the long term.

He’s missing more bats with his fastball, and while one percentage point might not seem like a lot, when you throw that pitch 65.5 percent of the time, it adds up. Still though, the marked decrease in whiffs on slider compared to 2013 both makes sense when paired with his increased usage, but also makes one wonder if this 23 percent strikeout rate is sustainable. To explain his uptick in ground balls, we can look at his ground balls per balls in play:

Note the dramatic change on his slider, and given how much more he’s using the pitch, it goes a long way towards explaining all those worm burners. Still, to determine if the ground-ball rate is sustainable, something would have to have changed about the slider. Is that the case?

There’s not much going on in terms of horizontal movement for his slider, but its vertical break is far greater, and looking at 2012, when it can move that much, his GB per BIP increases. It might not be sustainable at this particular level, but if he can keep this type of movement, the regression should be mild.

None of this seems to portend the dramatic change that has taken place (save for, perhaps the slider). Eovaldi hardly throws a third pitch, and one doesn’t appear to be coming. He is pounding the bottom of the zone more often compared to 2013, but there’s not much that explains the increase in whiffs in the middle of the zone: 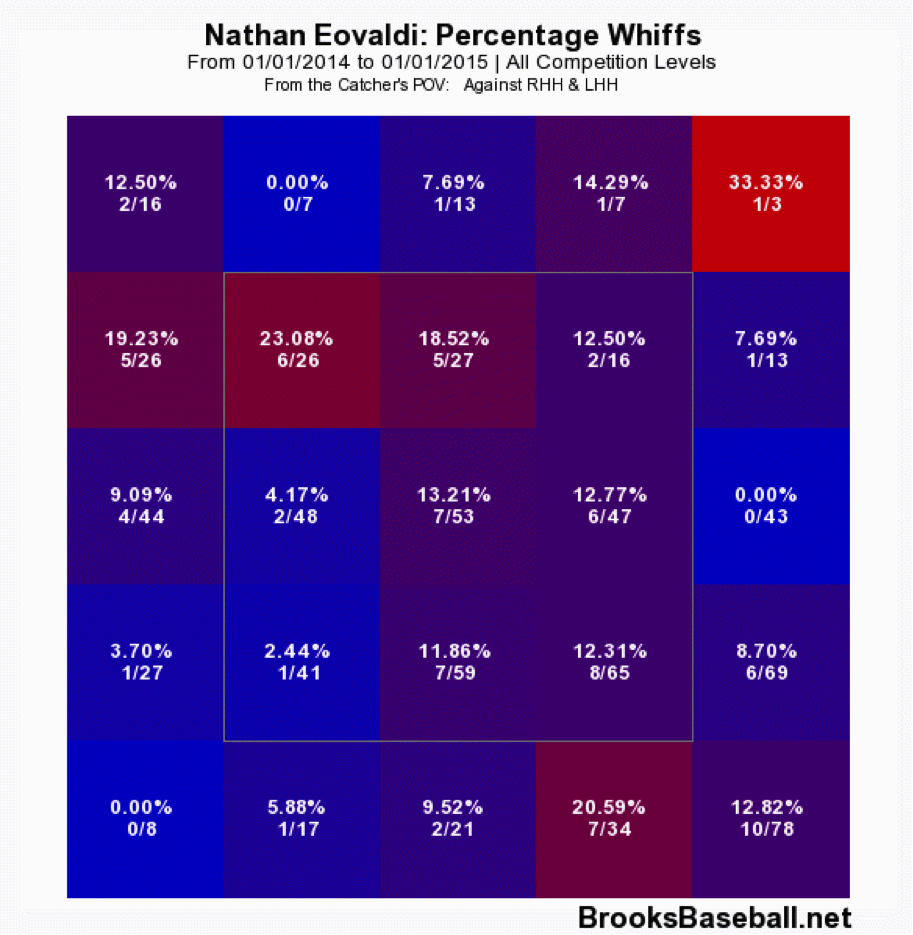 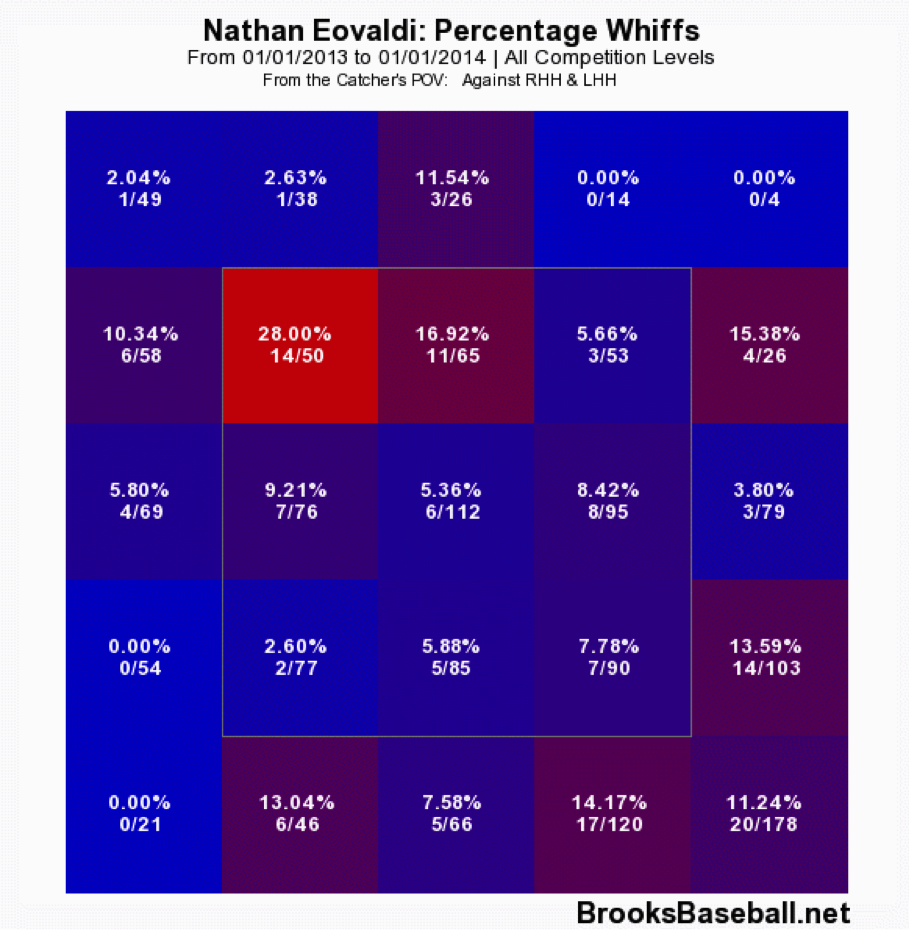 It’s possible that something in the midst of what we’ve looked at have given Eovaldi the confidence to pitch in the middle of the zone, as he hardly lacks for stuff. It’s also possible that eight starts are not enough to say that Eovaldi is a different pitcher altogether, and instead this is just a nice little run. Consider that over a 12-game sample last season, Ricky Nolasco went 8-1 with a 2.07 ERA, 62 strikeouts, 17 walks, and 58 hits in 74 innings pitched. This isn’t to say Eovaldi is Nolasco in this situation, but just that good runs do take place, and they’re more noticeable at the beginning of the season.

Before we step back and look at the grander picture, let’s look at one more statistic, one highlighted by R.J. Anderson after Eovaldi’s first start of the season. How Eovaldi fares against left-handed batters is a huge element of his game. In his career he’s allowed a .790 OPS against southpaws, while producing a more moderate .631 OPS against right-handed batters. R.J. wondered if Eovaldi would be able to neutralize left-handed batters by using his slider more often, as he was effective at doing so in his first start. The answer, as it turns out, is no, Eovaldi has not become better at dealing with hitters of the opposite hand. He’s actually been worse in 2014, allowing an .873 OPS in 112 at-bats. The key to his 2014 has been shutting down righties to an astonishing degree, as they’ve struggled to the tune of a .376 OPS in 77 at-bats. If that number seems preposterously low, it is. Here’s a list of right-handed pitchers who have limited right-handed batters to an OPS under .400 in a single season, minimum 100 IP since 1950:

That’s right. No one. Bob Gibson comes closest, registering a .401 in his historic 1968 season, and only 23 pitcher seasons have been recorded with an OPS below .500 under the same terms, the most recent of which was Jake Peavy in 2007, and his figure was over 100 points higher than Eovaldi’s. Peavy only lasted 115 innings that season, most likely aiding his cause in keeping that number down.

Much as Eovaldi’s career figures suggest that he’ll be better versus lefties, they suggest he’ll be dramatically worse versus righties. He’s missing a lot more bats than he used to, but there’s no clear answer as to why that may be. He’s throwing more strikes, which is good, but it’s not clear why or if that will continue. Even with regression, it seems likely that Eovaldi has taken a step forward as a pitcher and that’s something we can be happy about. Suggesting that the current incarnation is not only sustainable, but only one step towards his becoming a top-of-the-rotation pitcher seems a bit hasty at best.

What this all means for fantasy is that those who believe Eovaldi is someone who has improved to the point worth holding on to and those who believe that he belongs in the “sell high” category can coexist. Selling Eovaldi is going to return a significant amount more than one invested in him prior to the season, and likely a greater return than if you hold on to him for much longer. So too, though, are his developments tangible. The slider is improved, and he’s throwing it more often, which is making him a better pitcher. Where you fall on the scale depends on how much of the unknown (strikeout percentage, walk percentage) is real and how much is not.

You need to be logged in to comment. Login or Subscribe
dloomer
Actually, a 2013 Nolasco comp shouldn't really be that troubling anyway. Nolasco ran into a BABIP buzzsaw in September and was merely average in June but otherwise was consistently good all year.
Reply to dloomer
TheArtfulDodger
I wasn't really trying to comp the two of them, so much as show that average pitchers go on great runs. I think if Eovaldi was 2013 Nolasco, there is a portion of fans who would be disappointed. 2013 Nolasco's strikeout rate was also four percentage points lower than the current incarnation of Eovaldi, which is just about what I mean when I say some regression is likely even with steps taken forward.
Reply to TheArtfulDodger
dloomer
Cool. Thanks!

I can see the disappointment - I know it's easy to really raise expectations based on early-season dominance, which is exactly the point you're making in that paragraph. But hopefully people would be satisfied just to get more from Eovaldi than they bargained for pre-season, and I think 2013 Nolasco would fit the bill there.
Reply to dloomer
TheArtfulDodger
Agreed. That type of production would qualify as a nice step forward for Eovaldi.
Reply to TheArtfulDodger
noone99
CJ Wilson, Kluber, Smyly, Lynn good targets to sell Eovaldi for?
Reply to noone99
TheArtfulDodger
The first three seem reasonable, though I'm not as high on Kluber as others around here. Lynn has the same right-handed dominance thing going which concerns me. I might even aim higher just to see if I can get more.
Reply to TheArtfulDodger
BenC22
How would you compare him to Mike Foltynewicz?
Reply to BenC22
TheArtfulDodger
I prefer Eovaldi, if only slightly.
Reply to TheArtfulDodger
prs130
if any one pitch is truly improved, I would expect whiff rates for ALL pitches to increase, not just the improved pitch... e.g., an improved changeup will of course result in awkward early swings at changeups, but will also result in awkward late swings on fastballs, regardless of whether the fastball is itself improved.
Reply to prs130
TheArtfulDodger
Ok... I'm not really sure the point here. That would likely depend on sequencing, but it's also clearly not the case here as Eovaldi is missing more bats with his FB and less with his SL.
Reply to TheArtfulDodger