You can keep your fantasy drafts—the hourly punctuality and mind-bending depth of a Scoresheet draft is the true rite of spring. We know that fantasy players love March for the madness that comes from being in multiple ongoing drafts. Isn’t that what that copyrighted alliterative phrase means?

As either an introduction or as a refresher course, we want to walk you through some of the tools at Baseball Prospectus that will help make your drafting life easier, thanks to the hard work of the technical folks behind the scenes.

If you’re a fan of the comprehensive single number metrics, SS/SIM is the Scoresheet equivalent of WARP. Tracing its lineage back to Nate Silver, who we can only assume dashed it off in between fixing political journalism and drafting a series of burritos, SS/SIM is a run-based metric that seeks to measure a player’s contributions to a Scoresheet team (or a team in a similar simulated fantasy league). Following Nate’s departure, we rekindled and revamped SS/SIM recently and added some additional components, gathered input and feedback from critics and experts, and released it with a little more disclosure toward the inner workings with an article back in 2011.

For offensive players, SS/SIM is a combination of their overall offensive value, a positionally adjusted offensive value, a defensive rating based on their Scoresheet range compared to average at their position, and a component for fielding errors. For pitchers, SS/SIM is essentially runs prevented using innings pitched and ERA. The breakeven threshold for starters is a 5.00 ERA and the breakeven threshold for relievers is a 5.40 ERA. While initially somewhat counter-intuitive, the higher threshold for relievers fits a Scoresheet context where reliever usage for your fantasy team has a cushion above real life usage and managers can put in low hook numbers that typically result in relievers posting better performances for Scoresheet teams than in real life, and allows a Scoresheet manager to maximize his best relief innings each week.

A couple of important things differentiate SS/SIM from other metrics meant to measure value comprehensively. The first and most important is a lack of park adjustment—Colorado is good for hitters in Scoresheet and bad for pitchers, and SS/SIM reflects that, and the opposite for parks like San Diego. The second important thing is an accounting for the expected output for replacement level players in a Scoresheet setting. As a result, only the very worst projections for players come close to an SS/SIM valuation near zero.

The result is a metric that sorts out some of the complexities of comparing across positions, valuation for the Scoresheet context, and a consideration for all the factors that were identified as influential in measuring value for Scoresheet. As part of our due diligence each year in ensuring that these benchmarks and thresholds are at appropriate levels, we look at the shape of predicted SS/SIM across all players, as shown in the following graph: 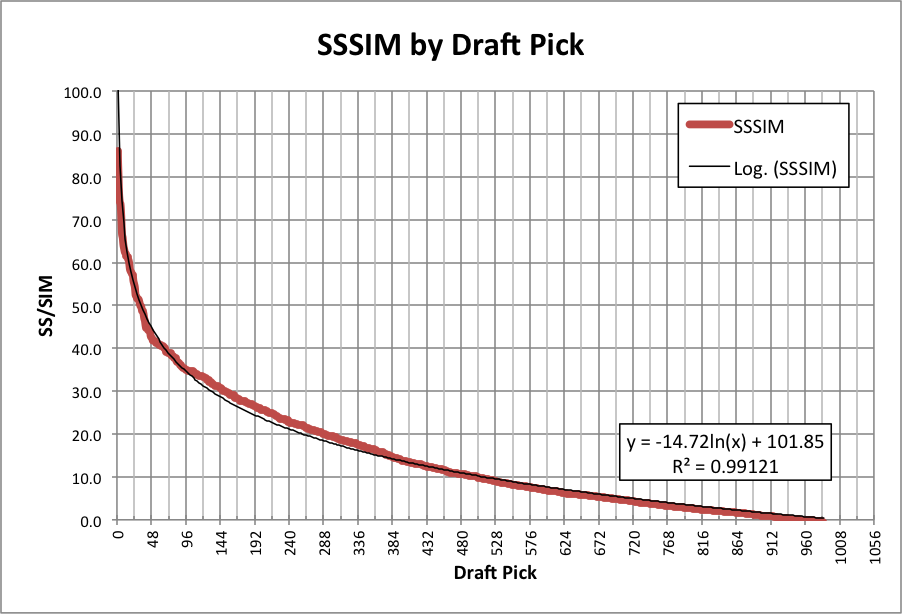 We’ve added a simple logarithmic trend line to this graph to show just how well it fits the shape of the distribution. This is an artifact of the way that SS/SIM represents the overall talent in MLB, which tends to follow a shape like this in other metrics, and how it translates to Scoresheet.

We’ve marked the draft pick on the horizontal axis, with markers every 48 picks, or every two rounds in a 24 team BL Scoresheet league. As you can see, the first two rounds of players are easily the most valuable and have the sharpest decline, and by the time you reach the end of the 10th round, the talent curve starts to become fairly flat. So when you’re evaluating draft pick trades, you can use a tool like this, and notice that this shows that the tradeoff is basically linear once you’re in the redraft portion of a continuing league.

One of the most useful tools on the Baseball Prospectus site for Scoresheet owners is the Scoresheet Draft Aid, which Rob McQuown explained in detail around this time last year. It includes SS/SIM as well as all of the major statistics and components used to calculate SS/SIM, and a few other helpful metrics for evaluating platoon splits and defense for hitters and peripheral components for pitchers that can help you get an extra edge when drafting. Just as with WARP or any other ‘big number,’ SS/SIM is strongest when indicating wider gulfs in value, or in ordering players of similar ability, such as relievers. For filling out a lineup, we recommend using some of the granular tools available on the Draft Aid to provide roster balance and figure out your offensive and defensive needs.

This Week’s Podcast
In addition to a whole lot more SS/SIM discussion, in this podcast we also took the time to make a reader’s draft pick in real time. Our goal was to walk through the mindset and thought process that goes into draft picks in the middle of the draft. We’d like to encourage other folks to submit draft questions in the comments section below and we’ll try to get to them next week. As a reminder, we tend to record on Tuesday nights, so picks that are coming up on a Tuesday night will be the easiest for us to do while we record.

You need to be logged in to comment. Login or Subscribe
Mark68
Hey guys...have downloaded every podcast thus far. I'm curious as to what your thoughts were on the teams I'm constructing in AL Ruth http://www.scoresheet.com/FOR_WWW/AL_Ruth.htm (Team 3) and NL All Stars http://www.scoresheet.com/FOR_WWW/NL_All_Stars.htm (Team 6). Both have unique challenges.

The team in AL Ruth won it all in 2012, but fell far in 2013, either because the players underachieved last year, or overachieved in '12. I think it could be a factor again this year, but I'm drafting young guys with upside, so even if this team is not a factor this year, it can be in the future.

The NL All Stars team is a two-time defending division champ, and came two wins short of winning it all last year. However, in my drive to win it all, I traded some of this year's draft picks to assemble a Bullpen of Doom (as well as emergency OF help, see below) last season. I then traded Matt Adams to pick up a keeper slot, and Cueto to get Choo (since part of my falling short last year was likely due to counting on contributions from Quentin and CarGo down the stretch). I want this team to still have a good shot at winning this year, and I kept Harvey because I want it to keep doing so in the future. But with fewer draft picks, I'm scrambling to assemble enough talent to feel comfortable this year.

Both leagues are standard hard 13-keeper/2-crossover leagues. Am I going in the right direction, or do I need to re-analyze?

Mark S
Reply to Mark68
rawagman
Just wanted to say that I'm enjoying the Scoresheet focus a lot and to thank Ian for correctly interpreting my question and answering it accordingly.
I drafted Bryant.
Reply to rawagman
smallflowers
Great podcast, men.
Reply to smallflowers