To read the previous editions in this series, follow the links below:

Please read the primer for an explanation on how these graphics are created. There’s going to be a lot of questions about this graphic in particular as projecting saves is about as easy as herding cats, but let’s just get right into it: 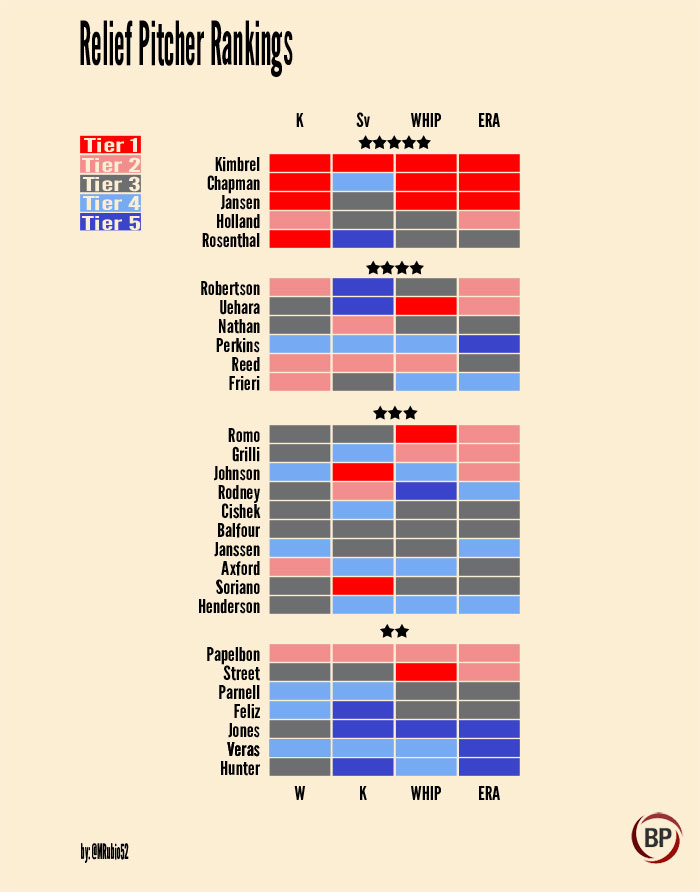 There’s a remote chance that Koji Uehara, David Robertson, and Trevor Rosenthal all end up with poor save totals. Uehara is 39 and an injury or a decline in performance could strike this year. Robertson and Rosenthal could be ineffective, but I think they outperform their meager saves projection. Most of their projections are based on the previous three years of data, which obviously skews things, so bear that in mind.

The current god of the position, Craig Kimbrel, is the only player who earns red all the way. When it’s all said and done, I suspect that Kenly Jansen could be a notch below Kimbrel this season, so he’s a guy that I’m targeting fairly aggressively.

Joe Nathan just keeps on plugging along at 39, as he’s projected to have a solid season as a reliever. The guy that I’m targeting here is Addison Reed, who had ERA issues last year. I believe in the arm, and while the competition in Arizona does worry me slightly, I think he wins out.

In the next tier, Fernando Rodney is a player I’m hands off on this point. I love that hat tilt but I’m not in love with his performance last year. This is just about the tier where all the guys end up looking the same and posting similar performance. Jonathan Papelbon clearly sticks out and Huston Street is a really interesting option, but the rest of the list is full of late-round sleepers who currently have jobs.

Similarly with Street, he has two tier 3s, a tier 2 and tier 1 but also falls below Balfour in ranking.

There are other instances that seem to be anomalies as well. For example, Perkins has three tier 3s and a tier 4 but is given 4 stars, more than Romo with two tier 3s, a tier 2 and tier 1.

Am I reading &/or interpreting your chart incorrectly?
Reply to buddaley
TheArtfulDodger
From the primer:

"With this infographic specifically, youâ€™ll notice that there are some odd pairings within the tiers. There is no specific rank within the tiers themselves, and this was made to mirror Mike Gianellaâ€™s list of catchers"

Replace "catchers" with "relievers" and "Mike Gianella" with "Paul Sporer", and you should have your answer. The stars relate to the order set by Paul while the tiers relate to the bins Mau detailed below.
Reply to TheArtfulDodger
beckryac
Big fan of these, but I'm curious how/why Chapman is in the fourth tier (4-14 saves) when it comes to the saves category...
Reply to beckryac
MRubio52
PECOTA is weird with saves on a few guys. I think Chapman will be fine in the Svs category and I'm going to be updating these with the online PECOTAs which work better.

As to why PECOTA thinks so lowly of him in terms of saves it could be the starter projections that are constantly placed on him.
Reply to MRubio52
chabels
It's not a few guys who PECOTA is weird with on saves, it's the entire league. Last year, there were 1260 saves across baseball, and the same in 2012. PECOTA projects only 1067 saves across baseball this season. And IIRC PECOTA was way under with saves projections in years past as well.

I understand the issues projecting saves, but PECOTA seems to have a fundamental problem with it, not simply something where it guesses wrong on a few players here and there. The system is missing about 200 saves, or 15%.
Reply to chabels
timber
Trying to figure out why you have Holland in Tier 3 for saves when PECOTA projects 32. Isn't that Tier 2?

(Also can't understand why PECOTA projects the lowest strikeout rate of his career, but that's an entirely different question...)
Reply to timber
MRubio52
I went by the book projections for these.
Reply to MRubio52
bishopscreed
I also wondered about why Holland and Jansen were dinged on saves compared to their payer cards. Can you explain why there is a difference between the book and player card PECOTA projections? Which is more trustworthy?
Reply to bishopscreed
BenC22
Can you maybe make graphs for each player individually?
Reply to BenC22
TheArtfulDodger
I would like this and find it helpful.
Reply to TheArtfulDodger
dscala
I have both Holland and Rosenthal in a freezer / dynasty league. Probably can only keep one. Who would you keep?
Reply to dscala
MRubio52
I would keep Rosenthal if you intend to keep a closer. I like his upside more.