To read the previous editions in this series, follow the links below:

We’re in the middle of a pitching-dominated era, which is somewhat highlighted by the depth at the position. If we rewind to 10 years ago we likely wouldn’t have any one-star options that would look even moderately appealing. As it stands now there’s a lot of interesting stuff going on toward the bottom. I broke the graphs down into three; let’s take a look at them: 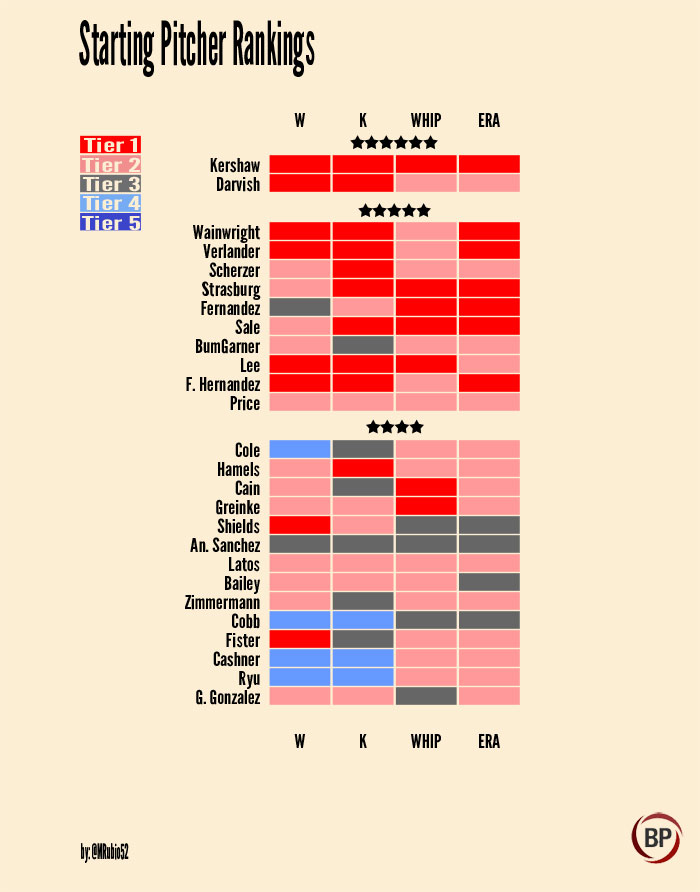 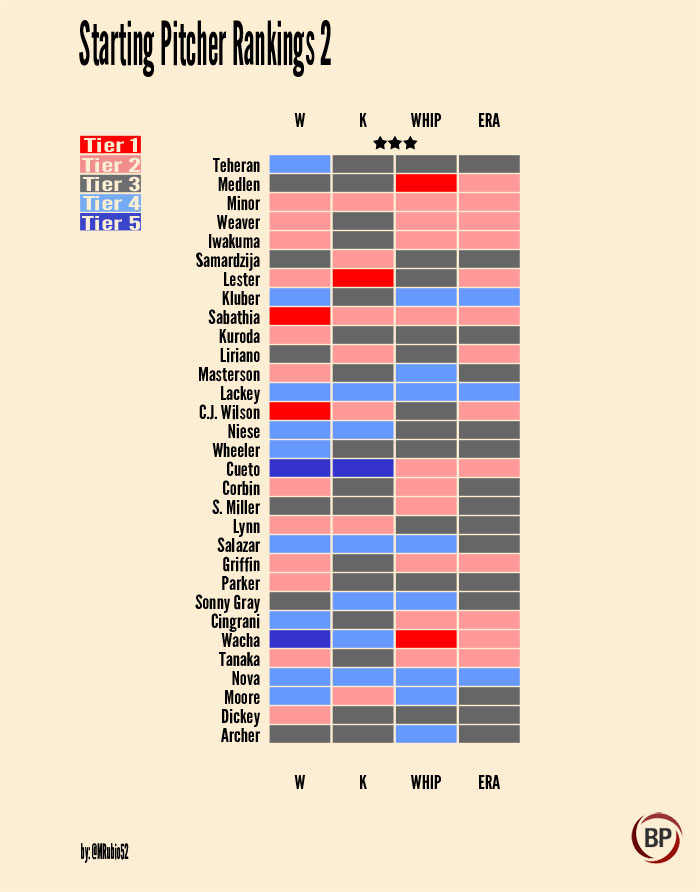 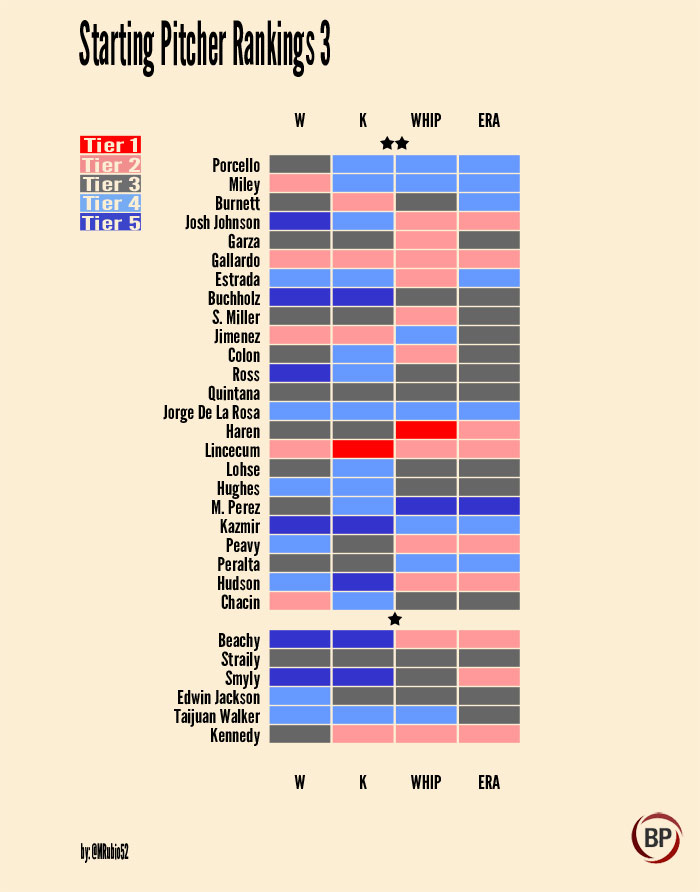 There are a few things to consider with pitchers. Health is a primary concern with all of these guys, as book-version PECOTA is hyper-conservative with the upper limits on innings, which in turn limits the Win and K projections. Still, you do see a clear separation between guys. Kershaw is the best pitcher available as he provides elite production across all four categories (the only pitcher that can boast that claim). Yu Darvish isn’t too far behind, and if he stays healthy this year he might become a legitimate first-round candidate come next season.

Paul Sporer was bullish on Gerrit Cole and while the book was conservative with his IP totals, he’s definitely an option to consider after the elite of the elite are gone. PECOTA likes CC Sabathia, but I’m less optimistic. He’s lost a few ticks off his fastball and there are a lot of high-leverage innings on that arm. Masahiro Tanaka is expected to have a pretty successful debut as the book thinks he’ll provide good production across three categories. I think Ivan Nova is underrated by PECOTA a bit, and he’s a breakout candidate for me.

Jose Quintana remains a bland pitcher who won’t kill you, but he’s not going to be much more than an SP4 in most leagues. PECOTA has a really rosy projection for Yovani Gallardo. I think he might help in ERA and WHIP, but I think the days of top-shelf K production from him are gone. Down among the one-stars, Edwin Jackson is expected to rebound, which should make Bret Sayre very happy. I think Taijuan Walker will pitch all year and outpitch his projections as well; I’d go gray across all four categories for him. And then there’s Ian Kennedy, who was a severe disappointment last year. I think he’s an interesting rebound candidate and there’s a good chance PECOTA has him nailed here.

For the curious here are the stat bins:

You need to be logged in to comment. Login or Subscribe
Behemoth
The ERA and WHIP data bins are backwards.
Reply to Behemoth
MikeGianella
I like that you called him BumGarner.
Reply to MikeGianella
MRubio52
I've typed that so often.
Reply to MRubio52
higgsboson
S. Miller is listed as both 3 star and 2 star
Reply to higgsboson
MRubio52
Will fix all issues tonight, thanks guys. Meant to invert the values
Reply to MRubio52
jemw06
Jose Fernandez is projected to be a top 5 K/9 among starting pitchers this season, he'll have no innings cap, yet he's tier 2 for K's according to your tiered rankings - with the exception of wins, get out your red pen and just make him dark red everywhere else. He mowed down 187 last season and got stronger as the season went on. He's going to strike out fewer batters than Waino? If he gets the innings, he'll punch out 200+, and there's nothing in his peripherals, his SwStr%, his contact rates, his secondary offerings or his velo that suggests he won't.
Reply to jemw06
MRubio52
PECOTA was pretty pessimistic about his Innings Total for this year which is why he's essentially gray and pink in K's and W's, and he didn't miss red for k's by all that much.
Reply to MRubio52
jonjacoby
Also amusing Gerritt Cole listed right above Cole Hamels, so it reads:
Cole Hamels

It took me a moment figure it out.
Reply to jonjacoby
boatman44
When will Matt Latos be given the extra star he deserves,even according to your stats he should be up a level.(:
Reply to boatman44
slemar37
Love the chart, Surprised to see Cashner as high as he was in the 4 star tier, but at the same time, surprised to see he is in the lowly tier 4 in strikeouts? 90-117k's?
Reply to slemar37
bishopscreed
Has there been any validation of PECOTA's ability to project wins?
Reply to bishopscreed
sdinsmor
How is Cobb a 4-star pitcher with two tier-4 skills and two tier-3 skills? You've got Mike Minor as a 3-star pitcher with four tier-2 skills, and Cobb doesn't have a single one.
Reply to sdinsmor
Dandies3
How does An Sanchez ( all grey)get in the 4 star listing
when many on the listing below(3 stars) have all pink or pink and red? There are other obvious flaws in the listings if you base it on the tiers for each of the categories.
Reply to Dandies3
TheArtfulDodger
Per the primer:

"With this infographic specifically, youâ€™ll notice that there are some odd pairings within the tiers. There is no specific rank within the tiers themselves, and this was made to mirrorMike Gianellaâ€™sÂ list of catchers. So, youâ€™ll get a guy likeWilson RamosÂ ahead ofÂ Jason CastroÂ for that reason."

They directly relate to those rankings.
Reply to MRubio52
Dandies3
Still does not explain how sanchez who is a tier 3 in all four cayegories is in the 4 star group while mike minor who is a tier 2 in all four categories is in the 3star group of pitchers. As noted in my previous posting, there
are sveral other questionable.
Reply to Dandies3
TheArtfulDodger
As noted in the previous answers to those postings, the tier that a pitcher is grouped in is directly related to the rankings released by Mike Gianella, that Mauricio linked to.

If you're wondering why they're in that tier, it's worth asking Mike on his article so that he can respond. Mauricio can't necessarily answer why Mike put guys in specific tiers.
Reply to TheArtfulDodger
Dandies3
I think I now see the disconnect. The difference appears to be in the individual perceptions of Mr.Gianella and Mr. Rubio.
Mr. Gianella put the pitchers into the various tiers based on some process (subjective?, analytical? or other?) which is undefined for the reader. His perception is that Cobb and Sanchez are 4 star pitchers.
Mr. Rubio took Mr. Gianella's lists and put his own perceptions in each of the 4 categories. He happens to believe the Minor, Medlen, Sabathia have more value in the four categories then Sanchez or Cobb and shows that with the various colors ( tiers) assigned.
Bottom line: relative value is based on the perception of the evaluator. Sometimes there is agreement - like Kershaw- often there is not.
Reply to Dandies3
TheArtfulDodger
Mauricio's representations are not "perceptions". They are based on PECOTA and then tiered into the bins he describes. Otherwise yes, that is the general idea.
Reply to TheArtfulDodger