Third base isn’t first base when it comes to robust production, but there are a host of intriguing options up and down the position. Miguel Cabrera sits atop the list and the separation factor can be read into the differences between the numbers. Before we dive in, let’s look at the graph: 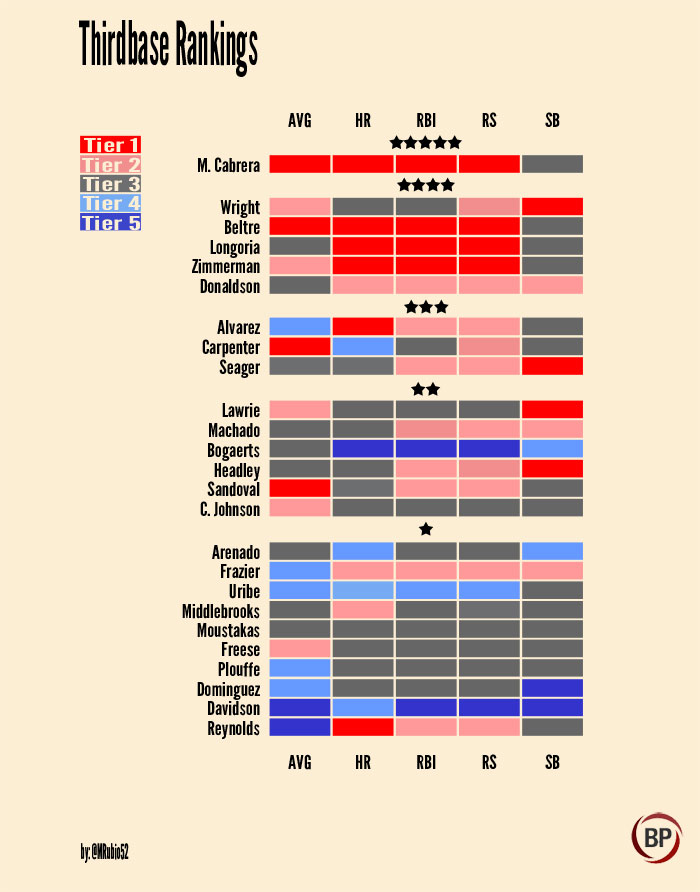 Again, these graphs are based on the PECOTA book projections, but we’ll soon have a more reader-friendly interface that will present you with more options (including interchangeable stats for those of you in leagues with different stat layouts). For now, we can see that the book’s projections are extremely pessimistic about Xander Bogaerts’ playing time. Take that with a gigantic grain of salt—he’ll play, and while I don’t expect him to hit the ground at a Trout-esque pace (nobody should), he’ll be a legit option at third this year.

There’s a lot more gray in this graph, especially in the power categories. Some of this is because of PECOTA seeing bounce-back years from guys like Chase Headley and Pablo Sandoval. There’s also a lot of optimism around Brett Lawrie in this chart. I think that’s an interesting, albeit somewhat expected, development given his age and player profile. In the one-star tier, Todd Frazier is seemingly out of place among guys like Juan Uribe and Matt Davidson. I think the big limiting factor with Frazier is his inability to hit for average, which can hurt your team if you carry too many similar hitters.

There’s pretty good production and value to be had here. For the curious, here are the stat bins:

You need to be logged in to comment. Login or Subscribe
Johnston
Nice work. I am enjoying this series very much.
Reply to Johnston
slemar37
Aramis Ramirez?
Reply to slemar37
MRubio52
I'll add an addendum with a few players who were left off the list later in the week, there was an interesting conversation we had about guys like him and a few others and I wanted to focus on them solely.
Reply to MRubio52
slemar37
Sweet, I'll be looking forward to it. Nice work on the data though. Very helpful.
Reply to slemar37
ssiegel
Frazier scores Tier 2 in 4 out of 5 categories. You would think he deserves an upgrade of one if not two levels. Curious why he is getting no love. By this measure he should be higher than guys like Machado
Reply to ssiegel