For a primer on this series, click here. (Note: this is based off the PECOTA projections from the annual).

The first thing that popped out to me as I was doing this graph was how well rounded Ian Desmond projects to be. Desmond helps out across all five standard categories while dominating none of them. The other thing that pops out is how there are still usable options through the upper portion of the tier-two rankings, and even a guy like Jonathan Villar has his uses down toward the bottom. 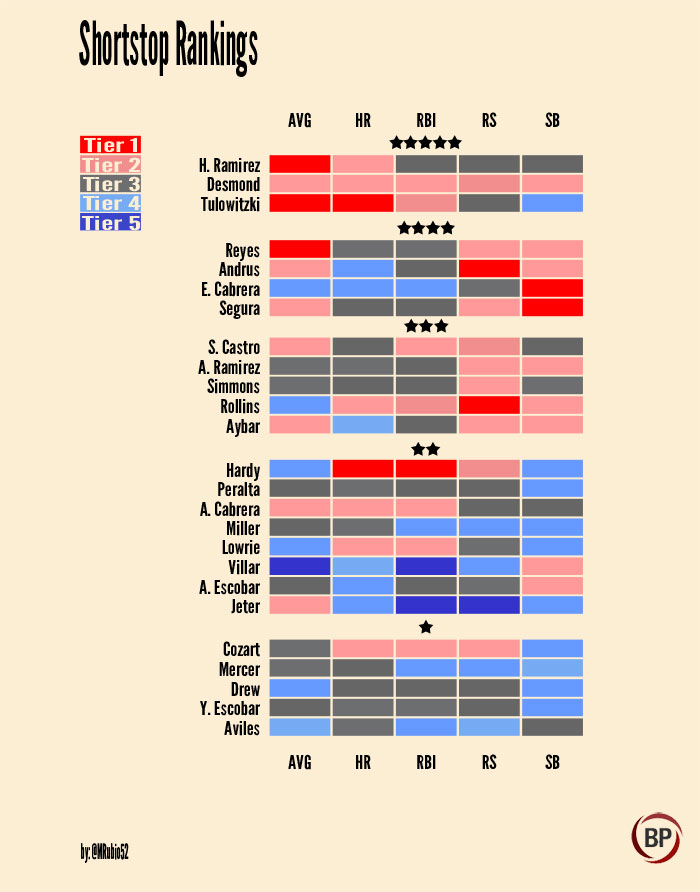 Once again, playing time is a concern with some names creating graph lines that perhaps don’t jive with their tiers. Hanley Ramirez and Troy Tulowitzki both come in under 500 PAs, which hurts their counting stats some. In Ramirez’s case, if he crosses the 500-PA threshold, he will be an elite option across all five categories relative to his position. Tulowitzki doesn’t run as much anymore, but his bat does serious damage, and if he’s healthy, he might be the top SS performer even without the steals.

Stolen bases are the position’s forte, and it’s evident throughout tiers 2-5. Tier two features burners up and down, and should Jose Reyes play a full slate of games, he would post elite SB numbers as well. I think Everth Cabrera was an interesting addition here, as he’s essentially a one-category player.

The Starlin Castro rebound PECOTA expects is an interesting note, and I do think the SB number is perhaps a bit too high, but I think he’ll bounce back nicely and should be a useful player in fantasy once again. Simmons teased elite output last year, but he projects to put up bland SS numbers across the board this year.

Tier four features a couple of players with statistical profiles I enjoy in J.J. Hardy and Jed Lowrie. I’m a sucker for the type of power they bring to a position that lacks it. I do think Villar is an interesting option down here. His graph is lacking, because PECOTA projects fewer than 300 PAs for him in 2014, but if he plays a full slate of games, he becomes a useful SS in most formats. Derek Jeter’s HoF husk is still patrolling the ranks.

Tier one is uninteresting and only the desperate should entertain guys like Yunel Escobar and Stephen Drew. Zack Cozart has some fantasy upside, but that’s really the only usable option that I see down in this tier.

For the curious, here are the stat bins:

You need to be logged in to comment. Login or Subscribe
MRubio52
Two notes:
I ranked Zobrist at 2B and so I left him off this graph.
The online PECOTA is different than the PECOTA projections I used which are from the book. In the near future I will have updated graphs to reflect this.
Reply to MRubio52
pobothecat
Really am enjoying your work this off-season. But ...

"Simmons is teasing with an elite output, as he projects to put up bland SS numbers across the board."