My colleague Paul Sporer put it best in the opening paragraph of his “State of the Position” column regarding the depth at 2B. No, this is not a sexy position full of robust offensive options and guys who can hit 30 bombs. What the keystone has become in my mind is a position that keeps your team going. The average top-30 2B will hit around .262 with around 10 bombs, 10 SB, 54 R, and 47 RBI. There’s nothing spectacular about that 5×5 line, but what it showcases is a type of positional depth that’s difficult to appreciate.

Let’s look at the graph for 2B: 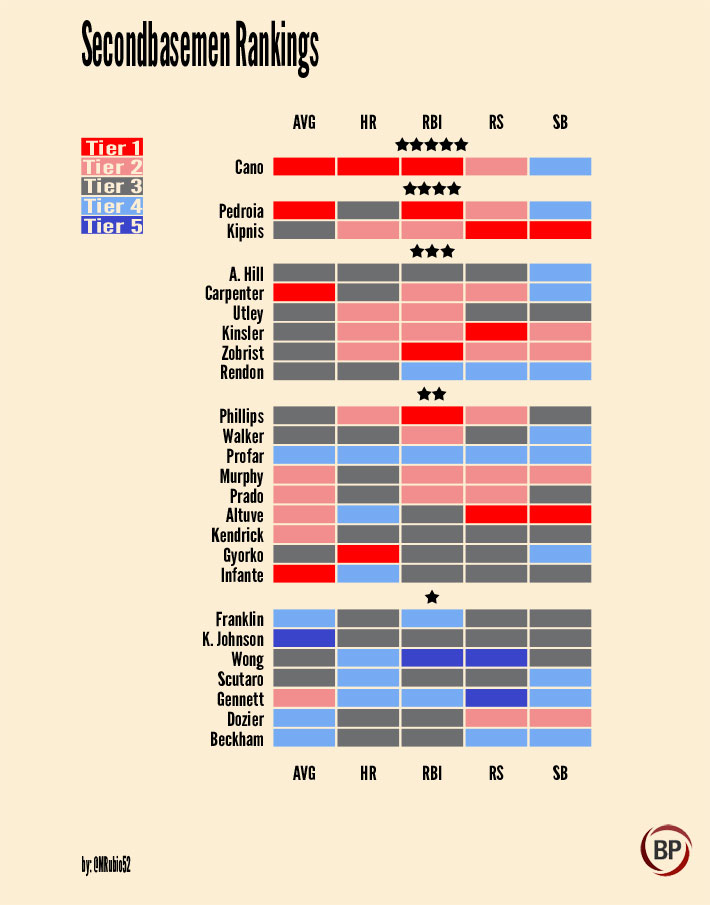 Again, these are ordered by tiers and the tiers themselves are in no particular order, but there aren’t many guys here that will kill you fantasy-wise. Profar’s bars look bluer than you’d expect because PECOTA only projects 335 PAs from him. Outside of Profar, who has legitimate upside with the bat, there’s a lot of good value to be had in the two-star group, which can’t be said for other positions. Some of that does have to do with the lack of elite depth up top—the gap between Cano and the four-star group is wide, and the chasm between Kipnis and the three-star guys might be even wider. But really, only the one-star guys will kill you, and that’s pretty much true of any position.

Second base is vanilla in a lot of ways. Guys like Aaron Hill and Martin Prado don’t make the needle move, but there are plenty of values to be found at the keystone.

Here are the data bins for 2B:

You need to be logged in to comment. Login or Subscribe
billward4
Uh, you might want to check Pedroia's SB history before projecting the likes of Prado and Utley do be better than him..

Reply to billward4
joseconsuervo
The stats used are based on the PECOTA projections for each player. These are the stat lines that are in the annual.
Reply to joseconsuervo
fawcettb
which are famously reliable projections of past performance...
Reply to fawcettb
MRubio52
I think that's an oversimplification of what PECOTA is. Projection methods vary but all of them have one thing in common: They take past performance into account.

Is PECOTA more "pessimistic" than most? Yeah, but I would argue that it's more realistic. A few of these guys will break their mold, but on the whole I've found it to be a very reliable method to understand what a player will be in the coming year.
Reply to MRubio52
carltondavis
It looks like Pedroia's PECOTA card gives him 19 SB.
Reply to carltondavis
carltondavis
A projection of 5 SB does seem awfully low.
Reply to carltondavis
danfinn01
Also Profar, he was tier 4 in all cats except Avg last year as a rookie in only 286 AB, he now has a full time job....oh and he plays in 'that park in that lineup' he should be at least tier 3 in the counting stats (SB may stay tier 4 depending on where in the lineup they put him).
Reply to danfinn01
joseconsuervo
This question is answered in the article.
Reply to joseconsuervo
mgolovcsenko
Who is going to play 2B for the Rockies? (No one on the chart it seems.)
Reply to mgolovcsenko
MRubio52
DJ Lemahieu
Reply to MRubio52
mprzybylo
Any reason PECOTA isn't as high on Rendon as others are? I'll assume injury history has something to do with it, but tier 4 for RBI I find interesting.
Reply to mprzybylo
MRubio52
You're correct, injuries are a big concern for Rendon, It's pessimistic about his ability to stay on the field for the full 162.
Reply to MRubio52
bulls2327
how is Altuve so low, when his avgs are better than most of the tier 3 players?
Reply to bulls2327
MRubio52
The tiers are made to mirror this list, which is not in order: