For a primer on the graphical rankings, click here.

First base was an extremely fun position to break down this year. The top offensive producers will come from the cold corner. Miguel Cabrera will move there from third, Joe Mauer and perhaps Buster Posey will enter into transitional phases in their careers at first, and there’s still a host of highly talented incumbents that crowd the rankings quite a bit. Again, these are made to mirror Mike Gianella’s tiered system and aren’t necessarily in a hard order. With that in mind, let’s address some questions about the graphs. 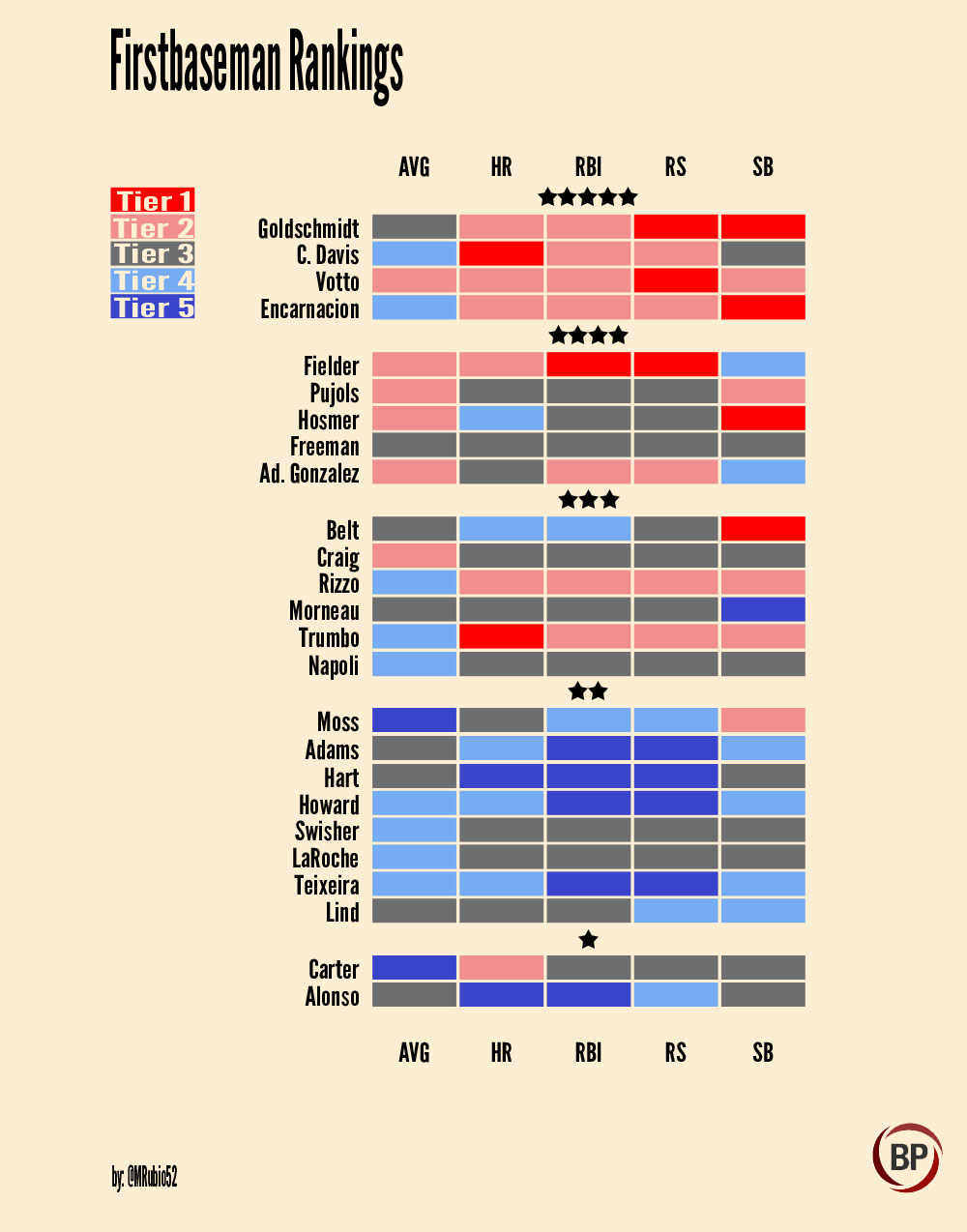 You’ll notice that Jose Abreu is missing. There is no PECOTA data out on him as his data comes from competition in Cuba. I have my own thoughts on Abreu that you can read in our Fantasy 1B Target/Avoid column coming later this week. A few readers noted that performance relative to the league would be nice to see. I agree and I’m working on it for the wrap up section we’ll have when we run through all the positions.

A reader noted that since the SB bins are super small it makes no sense to include them in the graph. The bins are small but I feel that I don’t need to hold your hand with regards to what is and isn’t important in this graph. The data is provided here and really the SB column with catchers and first basemen is meant to highlight players who will provide an added stat bonus. Guys like Goldschmidt and Hosmer offer a nice speed bonus that might make the difference when it comes to roster construction.

Finally, playing time is an obviously huge factor when it comes to fantasy roster construction. In the bottom tier you have guys like Corey Hart who will put up good statistics when they play, but their value will likely be mitigated because of playing-time or health issues. Keep that in mind when you’re looking these over. These aren’t meant to be the end all, be all; rather they are a quick visual reference tool designed to aid visual learners.

Here are the player data bins

You need to be logged in to comment. Login or Subscribe
joseconsuervo
I get the feeling that PECOTA does not like Matt Adams this year.
Reply to joseconsuervo
MRubio52
It's not a big fan of his RE Playing Time but his rate stats are ok.
Reply to MRubio52
Grasul
The graph would be much more meaningful if the five tiers colors were stratified by the expected impact to each category.

While you may not want to "hold our hands", the colors are fun but ineffective way to represent the given data.
Reply to Grasul
BenC22
Am I not understanding this comment or are you not seeing the data bins?
Reply to BenC22
Grasul
I see the data bins.

The issue is 8 SBs gets you Tier 1 of SBs on the chart while you need 30 HRs to get the same in its respective column. But 30 HRs are much more valuable (typically) than 8 SBs so representing the data visually this way is very awkward.

Because the impact of a SB or HR is quantifiable (though more work than just ignoring it), its just laziness to not include or at least estimate it.
Reply to Grasul
Pinson
The rest of the way or at least into the future, why not add an OBP column? BP readers are by definition the people who gave up BAvg long ago and went to OBP in their fantasy leagues. It would be nice if BP could liberate itself from Fantasy Murray Chassism and be consistent with its own values.
Reply to Pinson
tbunns
Count this as a vote against Pinson's proposal. It's Fantasy Baseball...we still use BA and RBI and all the "bad" stuff...because it's fantasy. Simulation leagues are another category, but for fantasy, I would prefer that BP still keep to the 5 traditional categories for primary reporting.

But I do think that an extra article or section on non-standard category leagues (OBP, SLG, whatever) and which players are affected by the addition of those categories to your league (so Votto would be a definite PLUS value in a OBP league, etc.)
Reply to tbunns
BenC22
I think we do try and mention OBP whenever a player sees a substantial increase or decline in value in OBP leagues compared to standard formats, but the fact is the vast majority of fantasy leagues still use AVG. The suggestion to include OBP more is a good one and one I know I'll personally consider, but it's not going to come at the expense of AVG.
Reply to BenC22
floydwicker
I love the graphical approach and have done the same... I like green vs red for positive values.
Reply to floydwicker
Menthol
My boy Belt is gonna bust out this year!
Reply to Menthol
DeathSpeculum
I like these charts a lot, but I feel like they are somewhat misleading. while a guy who's tier 1 in homers and tier 3 in sb's may seem to be equal to a guy in tier 1 in sb's and tier 3 in homers, these tiers should probably be weighted differently.

or
the difference between 17 and 35 hr's is not equal to the difference between 4 and 9 stolen bases.
Reply to DeathSpeculum
Behemoth
But we all know that. So it's not really a problem.
Reply to Behemoth
aaronbailey52
I love the charts. Very utile
Reply to aaronbailey52
MaineSkin
Abreu will be under Fielder and above Hosmer on this chart. I also think in a year he's not in a divorce settlement and child custody case Fielder in his new home with the best "top of the lineup" he's ever had will produce a career year.
Reply to MaineSkin
Robotey
If Freeman is all grey (Tier 3) and Craig is all Grey with one Pink (Tier 2), shouldn't Craig be ranked higher than Freeman?