I think we all understand that not everyone learns and retains information the same way. I’m a visual learner and it created some difficulty in the majority of my math classes. The first time I sat down and got serious about fantasy baseball and read through rankings, they failed to get through to me in a way that would allow me to retain the information. So, slowly over time, I developed a system to help identify a player’s strengths and weaknesses. I developed a loose tier system that’s been ever evolving, and now I would like to share this information with you.

So, over the next few months we at Baseball Prospectus will be rolling out our comprehensive fantasy baseball package. I was brought on to provide a visual wrinkle to the product in an effort to better communicate the ideas we’re going to be trotting out there for you guys.

The first infographics we will be debuting will feature what a player does well and not so well when compared to the top players at their respective positions. The data I used is PECOTA information that will be featured in the book. Both baseline production numbers and projected stats are all based off the PECOTA information.

I then created a baseline production for each position complete with tiered bins of data using a simple standard deviation model. For the graphic I’ll be using the basic 5×5 stats as projected by PECOTA.

With that information I created a tiered color system which is again, relative to the other top 30 players at their positions: 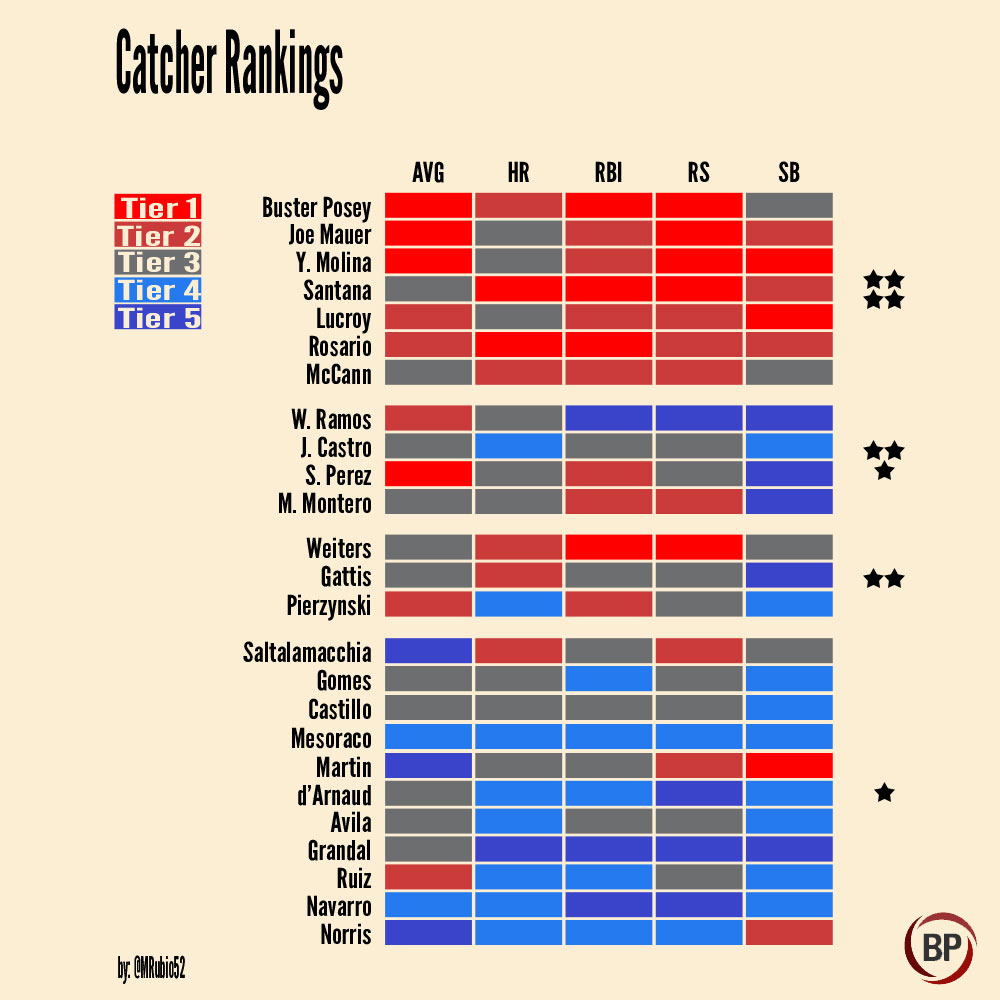 With this infographic specifically, you’ll notice that there are some odd pairings within the tiers. There is no specific rank within the tiers themselves, and this was made to mirror Mike Gianella’s list of catchers. So, you’ll get a guy like Wilson Ramos ahead of Jason Castro for that reason. Playing time obviously plays a major role in counting statistics so keep that in mind as well.

I hope this is a good guide for you guys to use when drafting so that you can understand where a guy helps you or hurts you relative to other players at the same position.

And for the curious, here are the data bins at catcher:

http://www.baseballprospectus.com/u/images/catchersrankings.jpg
Reply to MRubio52
edwinblume
Really, the graphic should be a link to an embiggened version of it.
Reply to edwinblume
bornyank1
It does now. Also enlarged the embedded version.
Reply to bornyank1
walrus0909
That's a pretty great feature. But I do wish the scales were consistent from one position to the next.
Reply to walrus0909
MRubio52
That's a good idea, I'll work on that.
Reply to MRubio52
batts40
Love all the fantasy content. Great work, looking forward to the other positions.
Reply to batts40
Shankly
Fantastic! Thanks.
Reply to Shankly
johnwood427
Love this!
Reply to johnwood427
dbiester
This is GREAT and a nice quick tool during a draft to find the player in the tier that fits your scoring category need.

Somehow I missed what the stars in the margin are for, sorry if I skimmed over it
Reply to dbiester
MRubio52
It's tied into the Tiers that Mike wrote about. There are 5 star, 4 star guys etc etc. I'll make it more clear for 1B next week.
Reply to MRubio52
dbiester
Got it now, I thought from the location the stars were tied to individual players -- maybe move them to top dead center in between the tiers?
Reply to dbiester
Behemoth
The stars are the rating for each tier of players according to the tiered rankings published recently.
Reply to Behemoth
JusitnG
must... acquire... Lucroy...
Reply to JusitnG
boards
Might I suggest a little more variation in the color scheme? 1 and 2, 4 and 5 are fairly close in color and hard to distinguish on certain monitors.

I second the idea of comparison across positions.
Reply to boards
MRubio52
That's fair, 1B will have a wider color temperature range.
Reply to MRubio52
patsmack
He's got Cubs fever and the only cure is spun Clark the Cub blood.
Reply to patsmack
Teenwolf
Is Jason Castro really projected for 6-10 HR? He could do that in his sleep. 209 ISO, 485 SLG, 18 HR last season. I hope I'm reading the graph wrong.
Reply to Teenwolf
MRubio52
10 on the dot according to PECOTA's projections. Playing time is a factor to keep in mind here and PECOTA has him under 400 ABs next year.
Reply to MRubio52
ander521
Very nice work
Reply to ander521
patsmack
Jason will be the most productive Castro in 2014. Beliee dat.
Reply to patsmack
MRubio52
I have a big crush on Jason Castro, he's my Dynasty boyfriend.
Reply to MRubio52
patsmack
Love lucrative Lucroy; longing for lacing liners in long-term leagues.
Reply to patsmack
fgreenagel2
Mauricio,

In a dynasty league that favors infielders over OF and SP, is Lucroy a better pick for 5 years than Chris Davis, Felix Hernandez or Jay Bruce?
Reply to fgreenagel2
gpurcell
Why is Jason Castro in three star tier? And if the entire range of SB is from 0 to 5 it's pretty ridiculous to include it as element in the ranking at all.
Reply to gpurcell
ClaytonThompson
When will all the PECOTA projections be released? Sorry, new to the site and am hoping to use a PECOTA projections spreadsheet to help with my fantasy prep.
Reply to ClaytonThompson