This article is the final part of my six part series on retrospective valuation, and concludes with a look back at pitching values from 2013 in mixed leagues. Since I already delved into much of my thought process in my last piece on mixed league hitters, I can save some time and simply point you toward that article for a more detailed, drawn out description of the process that led me to the valuations as well as the methodology.

At a glance, it looks like pitcher innings are worth way too much money. However, this is because pitcher innings contribute positively to two categories: ERA and WHIP. A pitcher who threw a perfect game in a mono league (AL only or NL only) would have been worth $2.70 (rounded) even without any strikeouts. Realistically, it all evens out, because these values are derived based on the average pitcher, as represented in Table 2.

If you only look at the best 108 pitchers, the most significant change comes not in the quantitative categories but in the qualitative ones. Regardless of format, some the pitchers identified as the 108 best are going to blow up and are not worth owning. The lower ERA/WHIP in mixed indicates that whittling down the pitcher pool increases your odds of avoiding a bust, but the relatively narrow gap in Auction Day ERA/WHIP shows that mixed league pitchers are still fairly risky. The four-dollar gap between the best mixed league pitchers and the most expensive ones is much larger than the mixed hitter valuation gaps. This illustrates a great deal of unpredictability. Of the 108 most highly coveted pitchers in mixed leagues, 46 were not on a team’s (hypothetical) roster on Opening Day (or nearly 43 percent). This makes raw mixed prices for pitchers far closer to mono league values than you might expect.

In some seasons, the differences between the AL and NL formulas matter a lot, but his wasn’t the case in 2013. Kershaw would have earned $41 using either the AL or NL formula, while Scherzer’s value also would have remained unchanged. As a result, this chart simply reassigns lower dollar values without changing the order of any of the top pitchers.

The exception is Kimbrel. Closers in mixed leagues take a beating. In an only format, most teams have one closer with only three teams owning two (assuming, of course, that no one dumps saves). In a 12-team mixed league if no one dumps saves every team has at least two closers and six teams have three. In reality, some closers will fail, but with 30 closers to choose from there are still far more saves purchased in a mixed league.

Just like I did for the mixed league hitters, the same modification has to be made for the pitchers because there is too much money at the bottom of the heap:

$9 is too high for Miguel Gonzalez, the man who would be the 108th pitcher in a perfect world where you had inside information on who the best pitchers were going to be before the season even started. Since I’m using draft data and not end of the season data, the 108th player shouldn’t be worth $1, but he shouldn’t be worth $9 either. $5-6 would be a suitable baseline for the borderline pitchers in a mixed league. Because there are more viable free agent pitchers than there are free agent hitters, it makes some sense that the baseline value for the 108th pitcher would not need to be adjusted quite as much as it was for hitters (down to $4).

Since there isn’t as much money allocated to pitchers as there is for hitters, the bump at the top isn’t quite as radical. 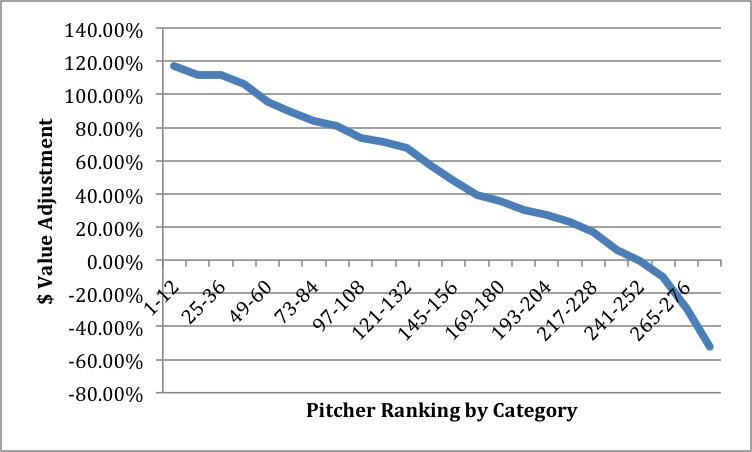 With the exception of Kimbrel, the list remains the same entirely. However, the changes on the whole barely make much of a difference. Kershaw gets a $4 raise, Scherzer and Wainwright get $3 raises, and no one else on this list sees more than a $2 raise.

As mentioned above, the valuation changes for pitchers are far less radical on a player-by-player basis than they are for hitters. Table 6 is another way of looking at how the values change when adjusted on a curve.

At the top of the heap, the overall prices barely change. The top pitchers get a slight reward, while the pitchers in the second and third tiers get dinged a little bit. It isn’t until the fourth tier where pitchers start getting hit a little bit harder.

One of the reasons the pitchers in the Top 36 hold nearly all of their value is because aces typically gain ground in four categories in the mixed adjustment while losing $1.75 in saves. As a result, a pitcher who is an elite pitcher stands to gain a little bit of ground when the prices are adjusted. At the very least these pitchers stand still and don’t lose or gain much at all.

In some ways the pitching valuation for mixed is even simpler than it is for hitters, and mostly confirms a number of preconceived notions that many of us have regarding mixed league prices, including but not limited to the following:

2) Closers are significantly devalued
When I only played in mono leagues, I never understood why mixed league players would wait so long in a snake draft before they grabbed a closer. Looking at what happens to their value in Table 7, now I completely understand why owners don’t pounce early or spend big bucks on closers.

There’s a big difference in the market between closers in only leagues and closers in mixed. Kimbrel, Uehara, Holland, and Nathan all earned $25 or more in their respective only leagues; in mixed not a single stopper cracked the $20 barrier.

The more interesting thing about this chart though is that the strong ERA/WHIP guys like Melancon and Uehara shoot up quite a bit in the rankings. Uehara moves past Holland and Nathan in mixed, while Melancon is ahead of Sergio Romo, Edward Mujica and Rafael Soriano. Melancon was behind all three of these closers in NL only. The push for ERA/WHIP in mixed makes pitchers like Melancon more valuable, at least relative to other pitchers in the pool.

Can these valuations be applied to mixed leagues?
Perhaps, but I’m as skeptical about using these pitching valuations in mixed leagues as I was about using the hitting valuations. One obvious problem is that mixed leagues have a great deal of variance on prices, and it’s entirely possible that my $37 value on Kershaw is far higher than he would ever go for in a mixed format. Practicality and auction experience goes far further than a theoretical list of values.

Another problem with pitching values is that I used a 33 percent baseline for the pitching values. While some leagues might use this, mixed leagues tend to devalue pitching considerably. Some mixed leagues push pitching prices down to 30, 25, or even 20 percent of a league’s overall spending. If your league does this you will also have to change your mixed bid values accordingly.

You need to be logged in to comment. Login or Subscribe
brooksp
How about a league with six pitching categories including holds? Does this make good closers more valuable in that you have fewer roster spots to devote to guys who get saves? Or what?
Reply to brooksp
MikeGianella
In theory it would add a little value to closers, but it would push their value down on the whole) (along with everyone else who doesn't get holds) because the $$$ for holds has to come from somewhere, and that somewhere would be wins, strikeouts, and saves.
Reply to MikeGianella
adrock
Excellent analysis throughout this series. Thanks, Mike!
Reply to adrock
NJTomatoes
Are the complete lists available?
Reply to NJTomatoes
MikeGianella
I have added the mixed league hitters here: https://docs.google.com/spreadsheet/ccc?key=0AhtUhMJ1b4IOdHVNLUM5NW5xWUdIUV9jejhON3ZaZFE&usp=drive_web#gid=4

I will be adding mixed league pitchers soon, hopefully by tonight.
Reply to MikeGianella
MikeGianella
Got sidetracked last night by the transaction analysis pieces. Will try to post pitchers soon.
Reply to MikeGianella
MikeGianella
Mixed pitchers are on that spreadsheet now as well.
Reply to MikeGianella
TonyRiha
There might be a new breakthrough this year - the closer that goes two innings on a frequent basis. The Reds want 30%+ more innings out of Chapman and if successful it's a trend that could certainly catch on. Obviously, if Chapman leads relievers in IP that significantly increases his value.
Reply to TonyRiha
backbrush
Having made similar spreadsheets for years to prep for fantasy drafts, I'd just like to stress what a smart improvement it is to use the 168/108 players/pitchers who were most likely to be drafted at the beginning of the season, rather than the 168/108 players/pitchers who performed the best during the season, or the 168/108 players who are projected to perform the best next season, to do draft valuations.

That insight alone has made these articles, plus the accompanying spreadsheets, invaluable.
Reply to backbrush