Last week I offered you a handful of ways to traverse this nasty time of year when we are without baseball, at least in the on-field form (in the MLB). You may be passing the time with a full immersion into your fantasy dice roll… er… football league, but chances are that you’re finding it coming up short. By the way I will just quickly mention that I play fantasy football, too, but I stand by the potshot—there is virtually no skill in that game for a bevy of reasons. Running this will have just as much as accuracy as the weekly projections on your fantasy football site.

Even if you are on your way to the fantasy Super Bowl, you still have plenty of time for offseason baseball as setting your football lineup only takes nine minutes of your Tuesday afternoon. It’s never too early to start familiarizing yourself with the upcoming player pool—not just the new and departing players, but also the shifts in the pool. Today, we will look at a free agent starting pitcher whose 2014 value may well be overly inflated by both his 2013 as well as his potential landing spot this winter.

Ervin Santana
I’ve long been a fan of Big Erv (credit: Mike Siano of MLB.com) and I’ve benefitted from some of his best work, but also taken some of his 5.00-something ERA seasons on the chin. All three times he’s posted a 5.00-plus ERA in a season, he has rebounded nicely the following year, and 2013 was no different. He cut his walks and homers allowed in Kansas City and pulled his 2012 ERA of 5.16 down to a very respectable 3.24—just in time for a walk year. Those homers are the key: 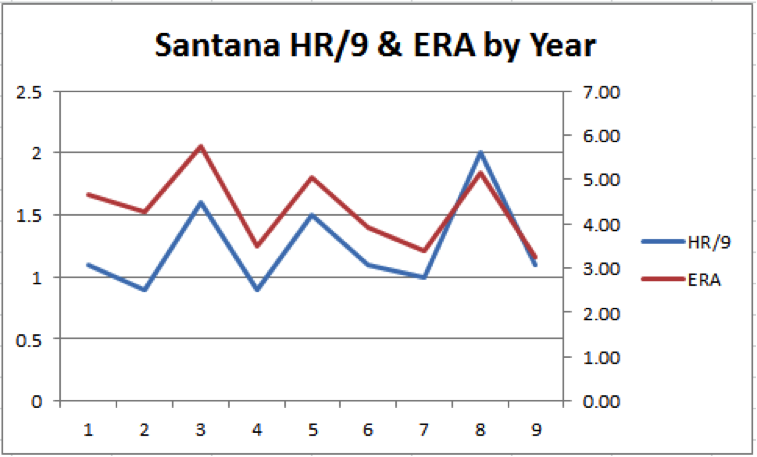 It’s not really any surprise to see a pitcher’s ERA rise and fall with his home run rate. Home runs are obviously bad and allowing more is likely to inflate your ERA, but Santana in particular has significant issues with the gopher ball and his inability to consistently tame it has led to an inconsistent career. As such, where he signs will be critically important. He and his agent have to know of his home run troubles so I can’t imagine Colorado or Cincinnati would be quick on the callback list whereas Oakland and even a return to Anaheim would be—or at least should be—among his top choices.

And yet even a desirable landing spot won’t prevent him from being overvalued. Santana possesses some quality stuff—particularly a devastating slider that can induce some ugly swings-and-misses—which creates a perception of him as a strikeout pitcher. But he’s just not. He’s been a below–average starter for strikeouts each of the last two years and the three years before that were spent at or just above average. His 23.9 percent strikeout rate in 2008 is far and away his best ever and also stands as his only time north of 19 percent.

Most fantasy players are smart enough to bypass a win-loss record as a measure of skill so this isn’t even a commentary on his back-to-back nine win seasons. They will instead focus on his 3.24 ERA and 1.14 WHIP in 211 innings and see Santana as a heavily desirable option. With a rather stable base skill set and a strong chance at 200-plus innings worth of said skills, Santana’s value boils down to his ERA which hinges on the one unstable aspect of his profile: his home run rate.

Additionally, he also has far and away the most sliders thrown from 2007-2013 according to Brooks Baseball. This matters because the slider is generally regarded as a particularly dangerous pitch when it comes to injuries for pitchers. He has had a relatively healthy career having hit the DL just twice, both in 2009, first for a sprained right elbow in April and then sore right triceps in 2009. He has averaged 32 starts a year since then with a high of 33 and low of 30.