“Next year” is a common refrain these days, especially amongst fans of the Los Angeles Dodgers and Detroit Tigers, though in reality, they’re just now joining the vast majority of fans in looking forward instead of at the here and now. There’s been plenty of coverage of the playoffs as their happening, recaps and previews dissecting the games and the decisions made therein. There’s even been the odd offseason splash with Jose Dariel Abreu signing with the White Sox, Alexander Guerrero’s expected signing with the Dodgers (third time’s the charm), and the inspiration for today’s article: Brandon Phillips’ placement on the trade block.

While he’s not the biggest name on said block (David Price), he might be the most likely to be moved given that it won’t require a king’s ransom in prospects to acquire him and the Reds may even be willing to eat some of the contract. The issue of course is what any team acquiring Brandon Phillips would actually be receiving. It’s likely at this point you’ve read about his overall decline in offense these past two seasons. It’s also likely that you know he’s a plus with the glove and that he’s what Vin Scully would call a “big butter and egg man” (he drives runners in). One of the pleasures I get in writing for BP is that it’s also likely that you (this specific audience) also know that RBI is a context-dependent statistic and that Phillips’ high totals in that category are inflated because he gets to hit behind two of the better on-base men in the business: Shin-Soo Choo and Joey Votto.

So keeping in mind that any acquiring team (and thus us, as fantasy owners) will not automatically be acquiring RBI if and when they trade for Phillips, I thought it might be of interest to look at what else these teams wouldn’t be receiving.

The first thing that comes to mind is: home runs. That might surprise, since Phillips has been one of the more consistent performers when it comes to blasting bombs, producing 18 each of the last four seasons and no less than 17 when he receives a full slate of at-bats. Those numbers of course were aided by playing in Great American Ball Park (GABP), one of the more hitting-conducive environments in baseball. Even with those benefits, of Phillips’ 18 home runs, a full 50 percent (nine) of them were ranked as “just enoughs” per ESPN’s hittrackeronline.com. Additionally, and perhaps more importantly given that only two of those “just enoughs” were hit at GABP, Phillips averaged a mere 389 feet on his 18 home runs compared to the MLB average of 397 feet*. *Both these figures use Hit Tracker Online’s True Distance

There’s also the matter of Phillips’ power coming almost exclusively to the pull side: 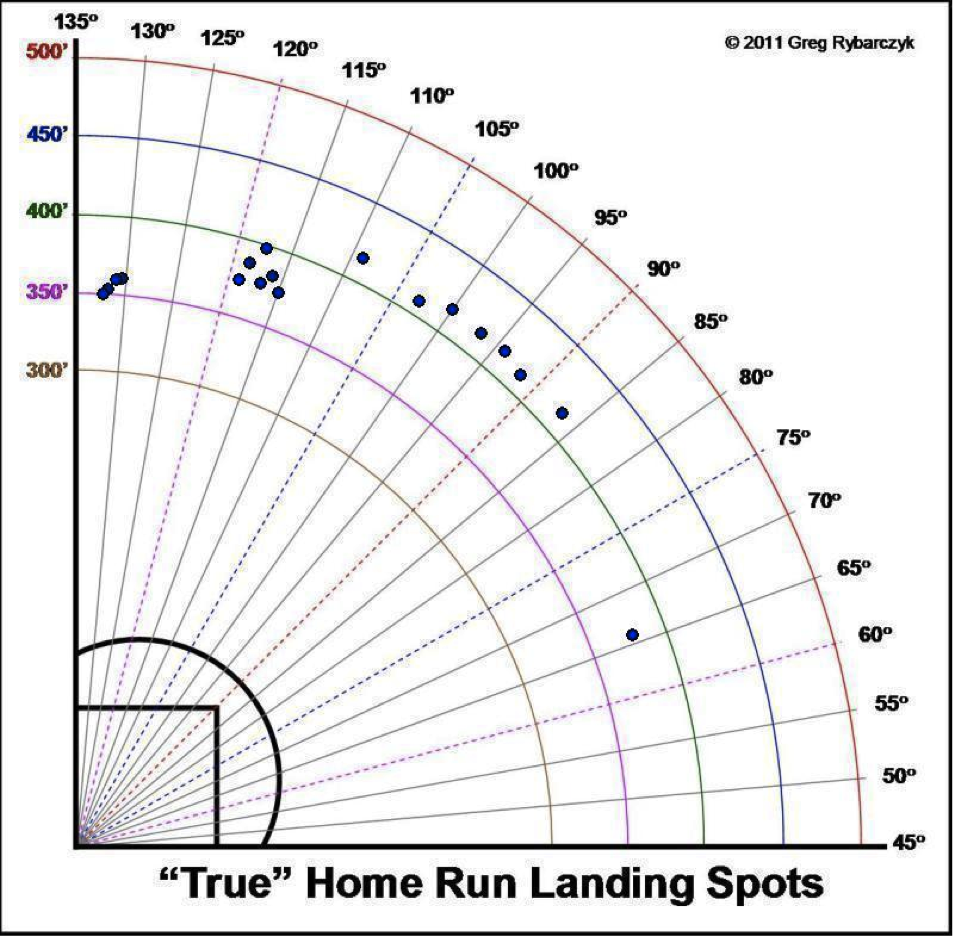 Knowing this, the specific construction (and not just run environment) of the ballpark of any team that acquires Phillips will be vital to his future home run production.

Patience is another thing that will not be arriving with Phillips, either at the plate or for questions regarding his on-base percentage (OBP). Outside of an outlier 2011 season, Phillips has never breached the .332 mark for OBP nor the seven percent mark for his walk percentage, notching a meager .310 and six percent respectively in 2013. He likes to swing, and generally does a good job of making contact boasting strikeout rates in the 12-15 percent range throughout his career. This is great when he is driving the ball, but Phillips is coming off a sub-.400 slugging percentage season, which is the latest in a line of concerns about his flagging production. While Phillips was able to keep his offensive production right around league average for his entire career (again, excepting a BABIP fueled 2011), 2013 brought about a 93 wRC+, the lowest of his career, as well as a .252 TAv—his lowest figure since 2006.

While none of this is exactly groundbreaking if you’ve been paying attention to Phillips for a bit, it’s import shows itself when you realize that a vast majority of fantasy owners are either not paying attention or found the overall decline to be a worthwhile tradeoff for Phillips’ RBI. Phillips’ ADP in 2013 was 65 per Fantasy Pros, averaging the numbers from ESPN, Yahoo!, CBS Sports, and Mock Draft Central. Not only that, but he was the 6th second-sacker off the board, following only Robinson Cano, Dustin Pedroia, Ian Kinsler, Ben Zobrist, and Jason Kipnis. You might be thinking that sixth overall really isn’t that bad, but when you consider that of the players who rounded out the top 10 (Aaron Hill, Jose Altuve, Brett Lawrie, and Martin Prado), only Altuve posted worse rate numbers, and even then made up for it with 33 stolen bases, it doesn’t look so good.

Which only brings us to another aspect of Phillips’ game that has been found wanting—or at least was in 2013. Once upon a time, you could rely on Dat Dude to swipe 20-plus bags for you, but in the last few seasons we’ve seen that number drop to the mid-teens and bottom out at 2013’s five. It’s reasonable to expect a small bounce back in this department given Phillips’ previous proclivities, but it’s also fair to question whether any bounce will be of the dead cat variety as he is only getting older and is currently exiting his prime.

When one considers that Daniel Murphy was selected at 254th overall compared to Phillips’ 65th and outpaced him in just about every category except for, you guessed it, RBI, it becomes hard to reconcile how we could consider Phillips a top ten option at the keystone if and when he departs the loving environs of GABP and the lineup that fills it. For someone as dependent on those around him as Phillips, the likelihood of losing Choo as a leadoff man is enough to cause me to bump him down my own personal rankings, much less the potential that he won’t have great on-base guys in front of him going forward. Consistency is a beautiful thing, but it’s best to let someone else chase Phillips’ consistent decline.

You need to be logged in to comment. Login or Subscribe
theboogieman
It appears that injuries played a role in his production this season. Phillips entered June hitting .291/.340/.479 with 9HR. Then was hit by a pitch in the forearm. I would speculate that it wasn't fully healed for a over a month. He then posted .304/.328/.473 in August. He suffered a quad contusion at the beginning of September. I would agree that he is on the downside part of his career, but it may not be as bad as it appears.
Reply to theboogieman
TheArtfulDodger
It's a great point. Thanks for mentioning it!
Reply to TheArtfulDodger
chapmantime
Was just getting ready to offer the same anecdotal opinion. The on-base questions are legit, and GABP plays a role in most Reds' home run totals, but the season numbers are undermined by those periods of injury and the Reds as a unit seem to have decided to steal less (Billy Hamilton reasonably excepted). This being a fantasy column, defense is only tangentially referenced, but that will obviously be a significant factor in any trade. BAL was immediately proposed as a possible landing spot, and NYY might make sense if Cano isn't re-signed.
Reply to chapmantime
TheArtfulDodger
Yeah, I did consider talking about the defense and his value overall (which is still a positive), as well as the contract (fairly negative) but I had rambled enough that I thought I'd be losing people due to length in a column that didn't need to address those concerns.

Thanks to both for mentioning the injuries - obviously he didn't miss time, but that doesn't mean he wasn't affected. I do think that even without docking him points for expected loss of power, etc as he ages, removing him from the Reds lineup is a big loss, depending on where he lands.
Reply to TheArtfulDodger
chapmantime
It's a good piece, Craig, and Reds fans obsessed with RBI would do well to heed it. Of course, we saw where expressions of concern over BP's lopsided offensive profile got Mr. Rosencrans. Some folks don't want to see the obvious.
Reply to chapmantime
TheArtfulDodger
Thanks much! Considering that I probably am not far from Mr. Rosecrans' own body type, perhaps I should have kept my trap shut on the issue.
Reply to TheArtfulDodger
mschieve
I dropped Phillips in my keeper league after this year. I didn't want to pay his high salary and the league doesn't count RBI's (Ottoneu).
Reply to mschieve
TheArtfulDodger
Makes sense to me. He's just not worth the draft price if you're not getting counting stats
Reply to TheArtfulDodger