As June became July yesterday, Adam Dunn’s numbers looked rather familiar. His batting average was once again below the Mendoza line, at .198, and he had 21 home runs through his first 312 plate appearances. A bit encouraging is that he had only struck out 95 times, putting him on pace to strike out about 50 fewer times than his league-leading 222 last season. He is also on a decent pace to hit 40 home runs for the seventh time in his career.

The move from the National League to U.S. Cellular Field was supposed to be one that would likely help Dunn’s offensive numbers, yet he has just a .187/.313/.401 slash line in 1,457 plate appearances on the South Side of Chicago. Quietly, as the White Sox continue to have a disappointing season, Dunn had his best June ever and his best single month since changing leagues. Dunn was so red-hot in June that his MLB.com player card has over 50 highlights of him either driving in runs or crossing the plate in June alone!

Early last month, Jon Greenberg of ESPNChicago.com wrote an insightful piece that reviewed everything Dunn and the coaching staff has gone through with him in recent months. Hitting coach Jeff Manto made the following statement to Greenberg:

"The thing with Dunn that people don't realize is that he's so athletic," Manto said. "He made a comment the other day, and I truly believe it, he said no matter what he tries, he feels comfortable. So I can ask him to hit with an open stance and he'll go ‘okay, fine.’ Hit with a closed stance, ‘okay, fine’ and he'll feel comfortable. Just a matter of him barreling the ball up."

Greenberg reported that the coaching staff asked Dunn to be more aggressive at the plate and break from his habit of working deep into counts and being willing to take a walk. Essentially, they told someone who just led the league with 222 strikeouts to be more aggressive at the plate. The thought process behind the theory was that Dunn hit just .118 in full counts, walking 55 times and striking out 65 times; only one of the three true outcomes he showcased at 3-2 was a desirable one.

Dunn is overshifted by defenders nearly every time he is up at the plate, so any reduction in ground balls off his bat will help, and dropping from 40 percent to 34 percent last month also helped to increase his batting average. Another difference is where Dunn was hitting those baseballs: He was less pull-happy in June than he was through the first two months of the season. 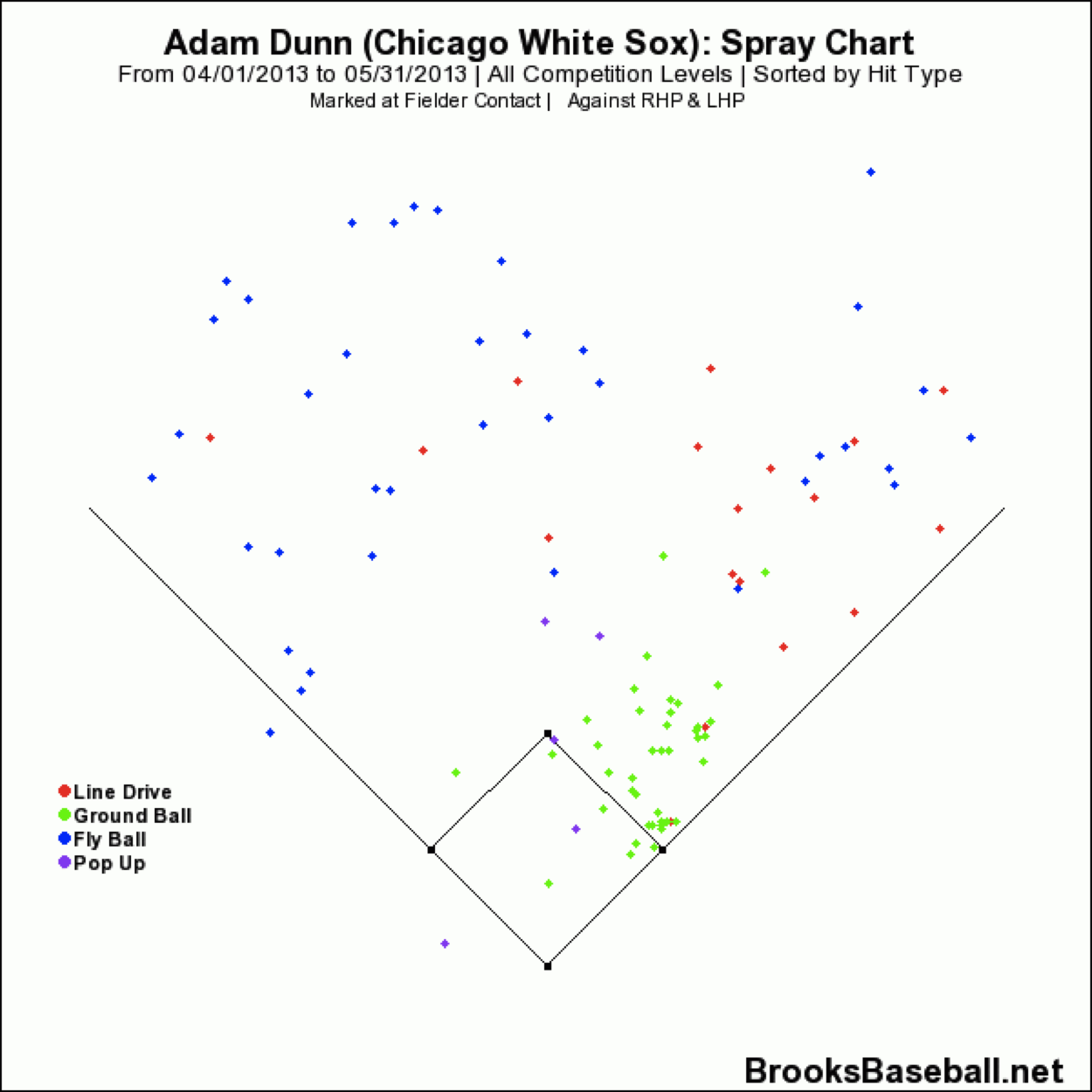 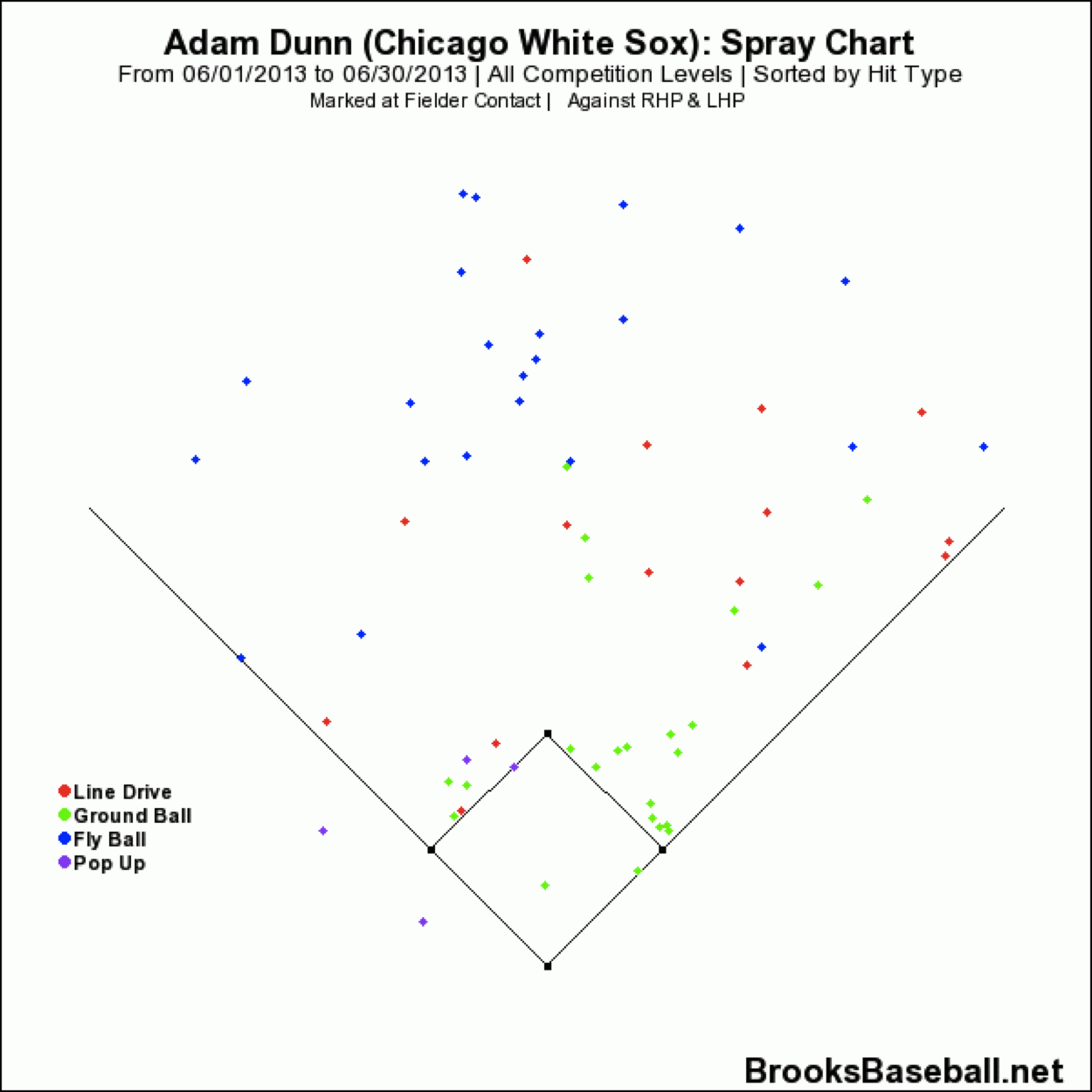 In recent years, Dunn has been one of those players that tend to stay on a single fantasy team because his batting average makes him nearly untradeable. Teams want the home runs, but fear the drag on the batting average. If Dunn can continue this recent run of improved contact along with improved patience, he could put the Mendoza line in his rearview mirror over the final three months of the season. He may hit 40 home runs again, but he is not going to hit .260, as he did in his final two seasons for the Nationals. Even a final average of .230 would be a big improvement over what he has done the past few seasons, and he could be more of an asset in the second half than fantasy owners thought he would be.

Thanks!
Reply to bobbykester
DABanales
Cmon man, show your respect for the writers and pay for the subscription.
Reply to DABanales
jackiniowa
don't be a cheap-o
Reply to jackiniowa